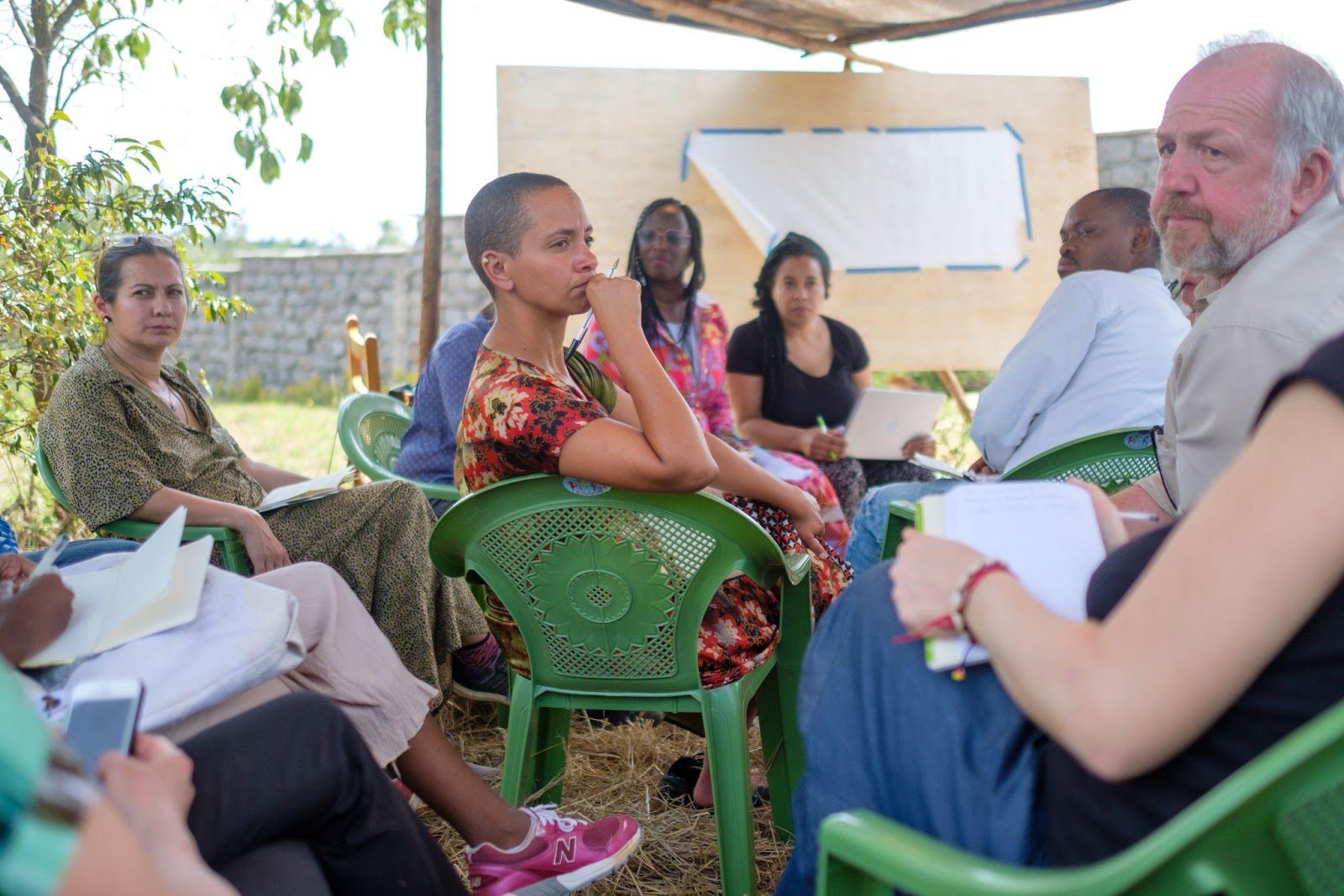 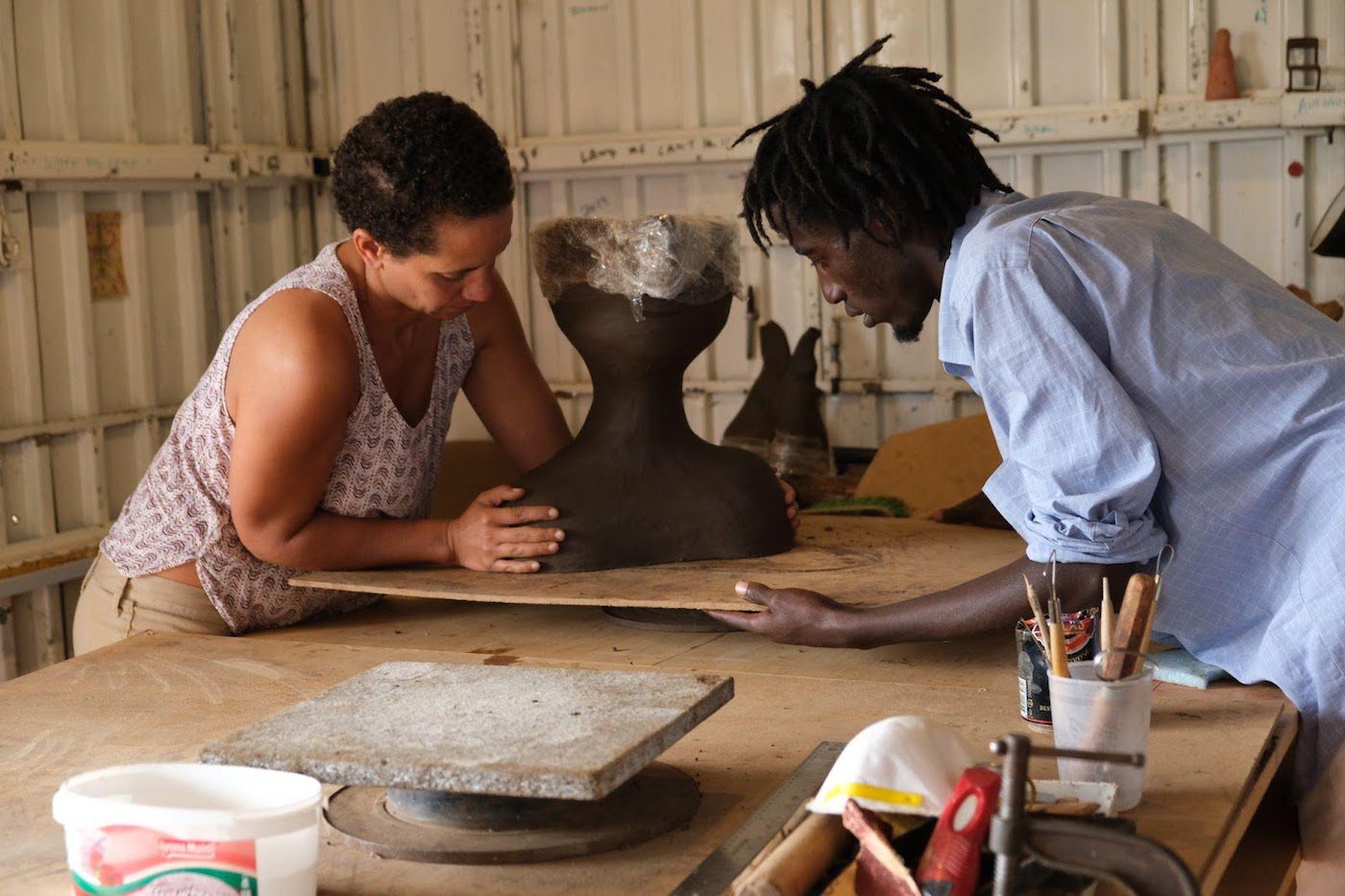 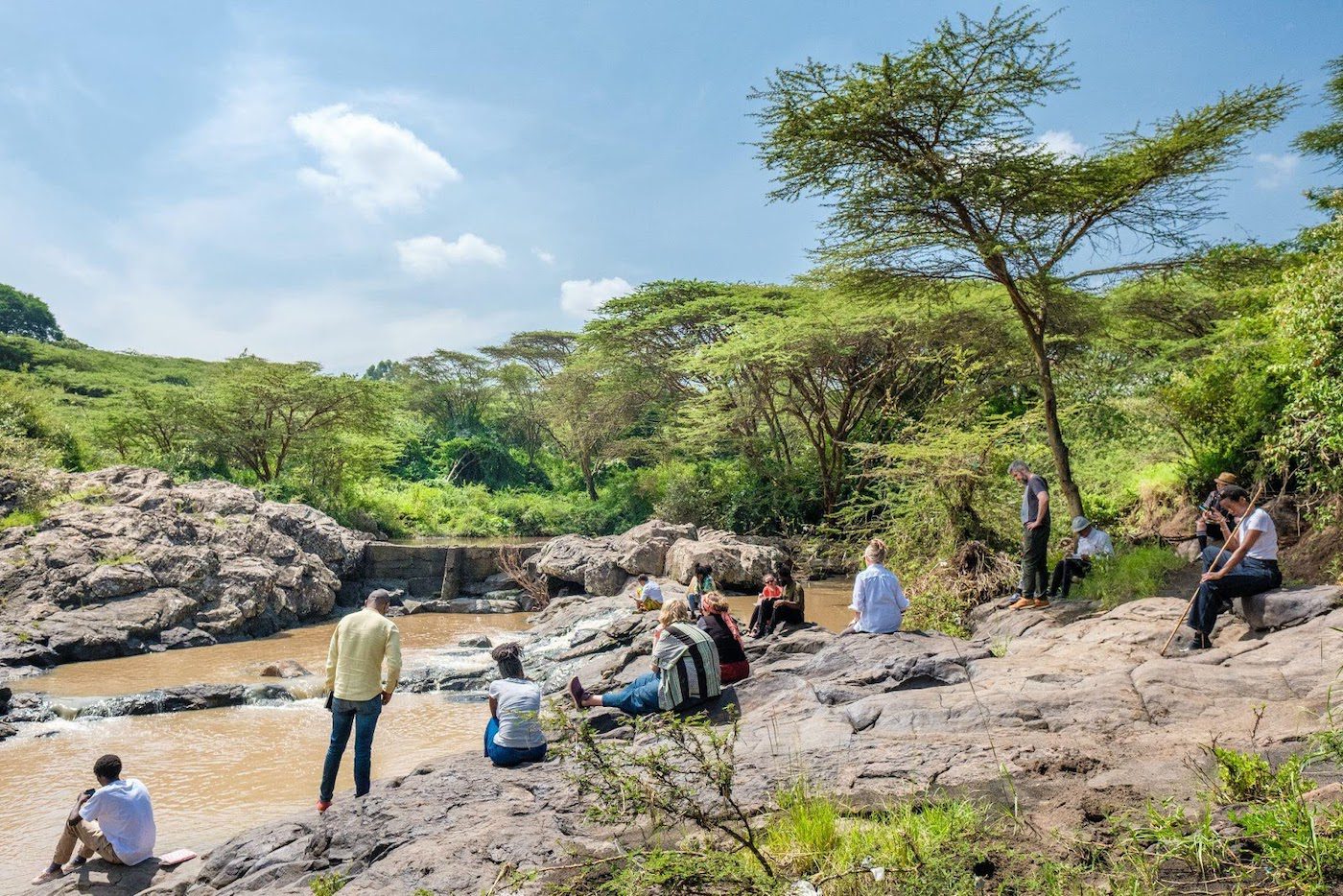 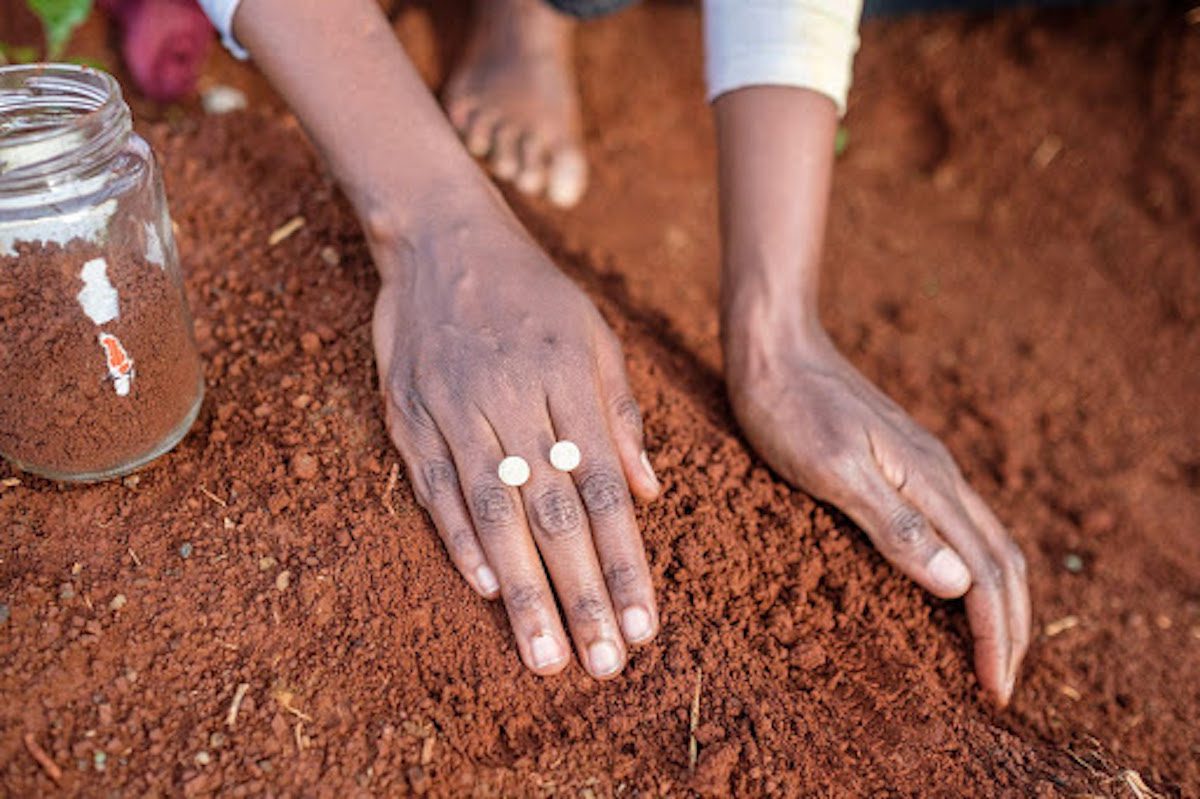 Kibe and Syowia working on a Kaspale sculpture, Image courtesy of Untethered Magic
4/5
4/5

The Nairobi art space Untethered Magic is about growth and independence – both artistic and environmental. C& speaks with its curators and managers to find out how that works.

Contemporary And: Untethered Magic is a collective. How exactly do you collaborate?

Syowia Kyambi: Our partnership developed out of a symbiotic relationship. We work on our own projects and sometimes we collaborate. I’m the main concept creator and curator of Untethered Magic. I’m particularly interested in knowledge building through merging different disciplines that bring different age groups together, or creatives and people who work in the fields of humanities and sciences. Kiberu is the project and administrative manager and Kibe is the concept creator who runs oversight.

C&: When was the studio founded?

SK: I wanted to be involved in developing art spaces that focused on process, in ephemeral and digitally produced works. Untethered Magic came about in 2019 when Kibe and Kiberu first moved in with me, initially temporarily. However, we saw the long-term alignments in our working methodologies.

We were hesitant to institutionalize, and the fact that we live and work together alters the formal setting which I think has caused some of the pitfalls in running independent spaces when they are designed based formal art environments. The word “untethered” strongly suggests a notion of things being fluid, which is something we all lean towards.

Kibe Wangunyu: Prior, I ran a photography collective with Kiberu and other people. There were unrealistic expectations and a lack of honest dialogue.

SK: A lot of people came to my property needing sanctuary. I was in the process of rebuilding my life, building a new home for my son and myself. Artist and fashion designer Wakianda Virginia had hit a snag in her practice and found it difficult to produce at home. She had heard that I let out the space. I was travelling the day she came, so I told her, “here are the keys, feed the dog and take care of the plants.” Artist Nicholas Odhiambo was also going through a transition and needed a space from which to explore Nairobi before leaving for art school in Germany. There’s this exodus of knowledge and expertise because of bad politics, gaps in public funding, and gaps in the educational system. I was hoping that by supporting Nick he would know he had a space to return to if he wanted.

C&: You run a radio station and are interested in permaculture?

KW: Sauti Msituni is a project between Kiberu and I. The radio station provides a platform for alternative music, dialogue, and a bit of cross-collaboration between African artists through music.

Dennis Kiberu: The East African alternative music scene is spawning a new age of musicians, speaking about the present through electronic music, indigenous rhythms, 808 drums, synthesizers, traditional instruments, and field recordings combined. The spread of relatively low-cost technology has fuelled the creative boom. One can become a musician with a laptop, a condenser microphone, decent headphones, and music/DJ software. That’s how we started an online radio station with Kibe. It presents a variety of genres: KMRU’s fantasy-scapes, the chilled-out funk of JIVU, the vibrant electric grooves of Ethiopian Records, the banging percussion of Kenya’s Kaleb Singa, the socially conscious sonic montages of Uganda’s Faizal Mostrixx, and the upbeat rush of Tanzania’s Singeli music – from the likes of Sisso, Jay Mitta, and Bamba Pana.

SK: We’re also interested in permaculture, because when you look at it closely, it is simply the way we farmed indigenously before commercialization. But people now give it a new name, because God forbid that we accredit our indigenous knowledge. The essential idea is that you harness the energy that’s coming into the compound before it leaves the land. Energy from all elements: wind, sun, earth, and water – you do not contain it. You devise systems that utilize it before releasing it again. You can use trees to provide shade, which reduces water usage and gives fertile soil. In ten years’ time, you have a pretty good system that runs well with minimal input.

C&: How does your space socially and culturally engage artists, or add to the fabric of the Kenyan art scene?

KW: Untethered Magic facilitates critical thinking in one’s practice; to truly rethink art making and materiality, and to have deeper peer-to-peer discussions. It’s a space for artists looking to build their visual language and seek meaningful exchange through their work.

SK: Our education system doesn’t facilitate critical thinking; the development of curators is slow. When I first came back to Kenya in 2003, there were hardly any curators to talk to, or critical writers for constructive criticism that didn’t just look to the global North for references. To produce strong work over a period of time, one needs to have the capacity for failure, time for experimentation, and the space for things that are not necessarily sellable, but meaningful to society.

C&: You also run and host artist’s programs and residencies.

KW: The mentorship model enhances cross-collaboration within Kenya or even the Pan-African movement without depending solely on the input of the global North. The residencies are aimed at artists from Kenya and East Africa with veteran mentors from the East African art scene, who operate locally and abroad.

SK: Another focus that we have with our mentorship program is to engage with the global South, to provide critical feedback and discourse to artistic process with an understanding of the East African context. Five to seven artists have four mentors, and are enrolled in a two-year cycle. It’s a non-hierarchical structure, as mentors and mentees choose each other.

C&: As it is with new self-organized spaces, questions of sustainability arise…

DK: Untethered Magic has self-sustainability at the core of its model; it intends to be a home as well as a collective. Sustainability can be obtained by the realization of financial freedom and autonomy of space, which can be based on green energy utilization, recycling, and indigenous farming methods. We are currently building a number of eco-friendly A-Frame timber houses with the support of the African Arts Trust. These will not only accommodate artists during residencies but also help the space to attain financial stability through being rented out.

C&: The studio is set on the periphery of a national park, which suggests a sense of freedom. There is firmness in its rockiness that provides tranquillity as the region gently slopes towards the river.

SK: There is negotiation with wildlife. In essence, we’ve encroached on the wilderness. We are situated behind the national park, on the edge of a gorge. We are at the beginning of the Great Rift Valley, which creates a lot of energy. But the town we are part of equally fuels us: Ongata Rongai is nicknamed “the diaspora” because it’s a mixed space of multiple Kenyan tribes that have resettled here.

The design of our space is traditional in terms of a boma, which is the Bantu, Nilotic, and Cushitic people’s method of building. A structure is built for the purpose of its use, and there is not a singular structure that houses everything. You’re living indoor and outdoor. There’s a constant negotiation with nature and a constant grounding that takes place because you are in continuous contact with the earth. We have a horseshoe-type shape where everybody has their own sleeping and working area. The kitchen is the most communal space and opens out onto an open-air deck with three entrances and exits allowing for the flow of energy. The kitchen is really the heart and hub of the compound.

We build structures as the need arises. The dynamism has to remain for engagement to keep growing and getting deeper. We are always dancing with change and attempting our best to communicate that to each other.

Dennis Kiberu is a radio presenter, PR practitioner, music producer, disc jockey, and photographer originating from and based in Nairobi, Kenya. He has studied journalism and minored in film at the Multimedia University of Kenya, with a focus on broadcast media and photography. Kiberu is a co-founder of Untethered Magic, dealing with project and administrative management, where he and Kibe Wangunyu run Sauti Msituni Radio, a diverse online radio station that seeks to explore the underground and alternative music scenes within the African continent.

Incorporating photography, video, drawing, sound, sculpture, and performance installation, Syowia Kyambi’s approach takes aim at the politics of the time as well as its legacy today: what is remembered, what is archived, and how we see the world anew. Syowia is based in Nairobi and is of Kenyan/German origin. She is an alumnus of the School of the Art Institute of Chicago (BFA, 2002) and the Transart Institute (MFA, 2020). Her work has been exhibited in museums and galleries in Senegal, Belgium, Finland, Kenya, Mali, Sweden, Germany, Zimbabwe, France, Norway, United Kingdom, Mexico, South Africa, North America, and Ireland.