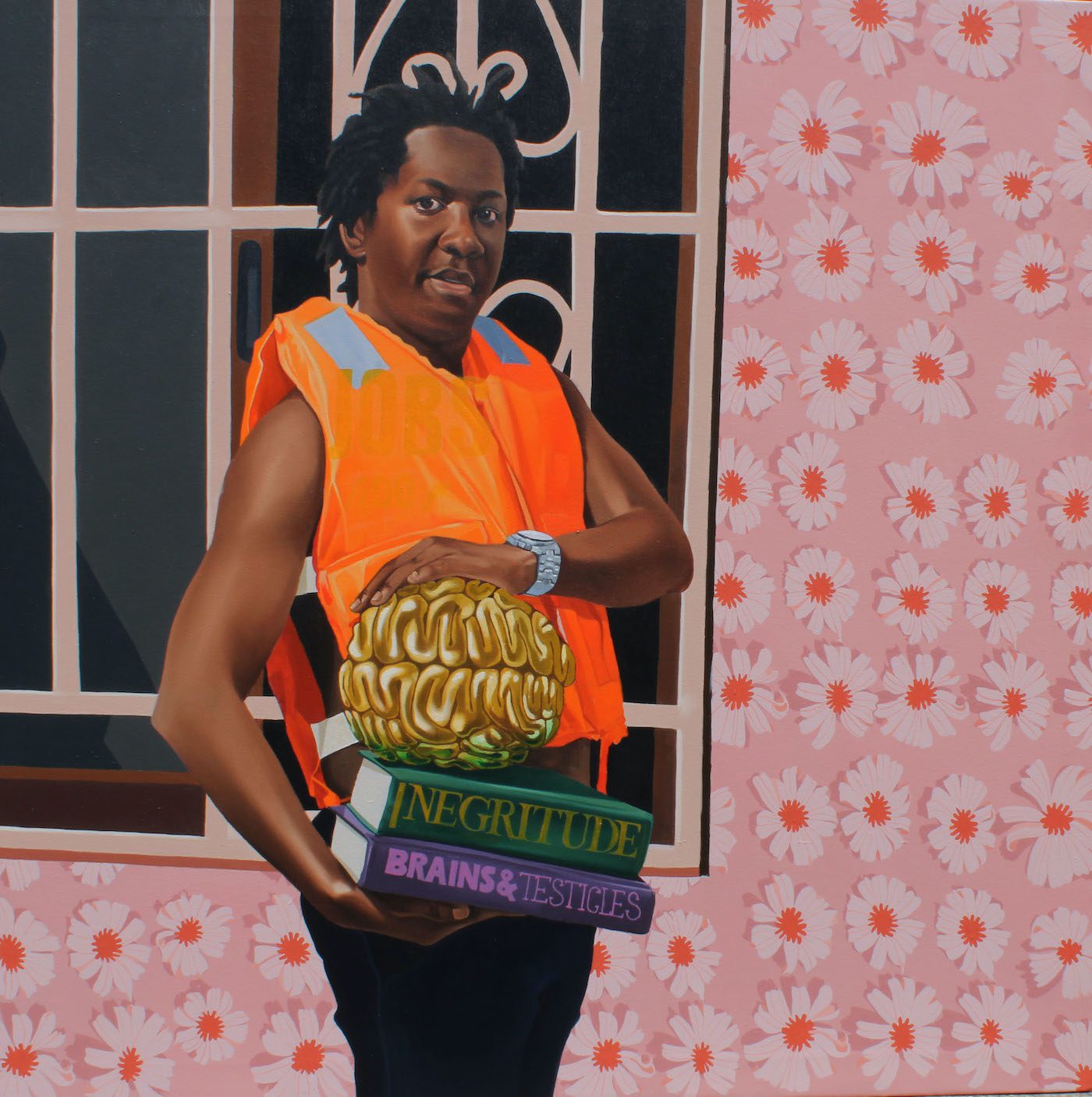 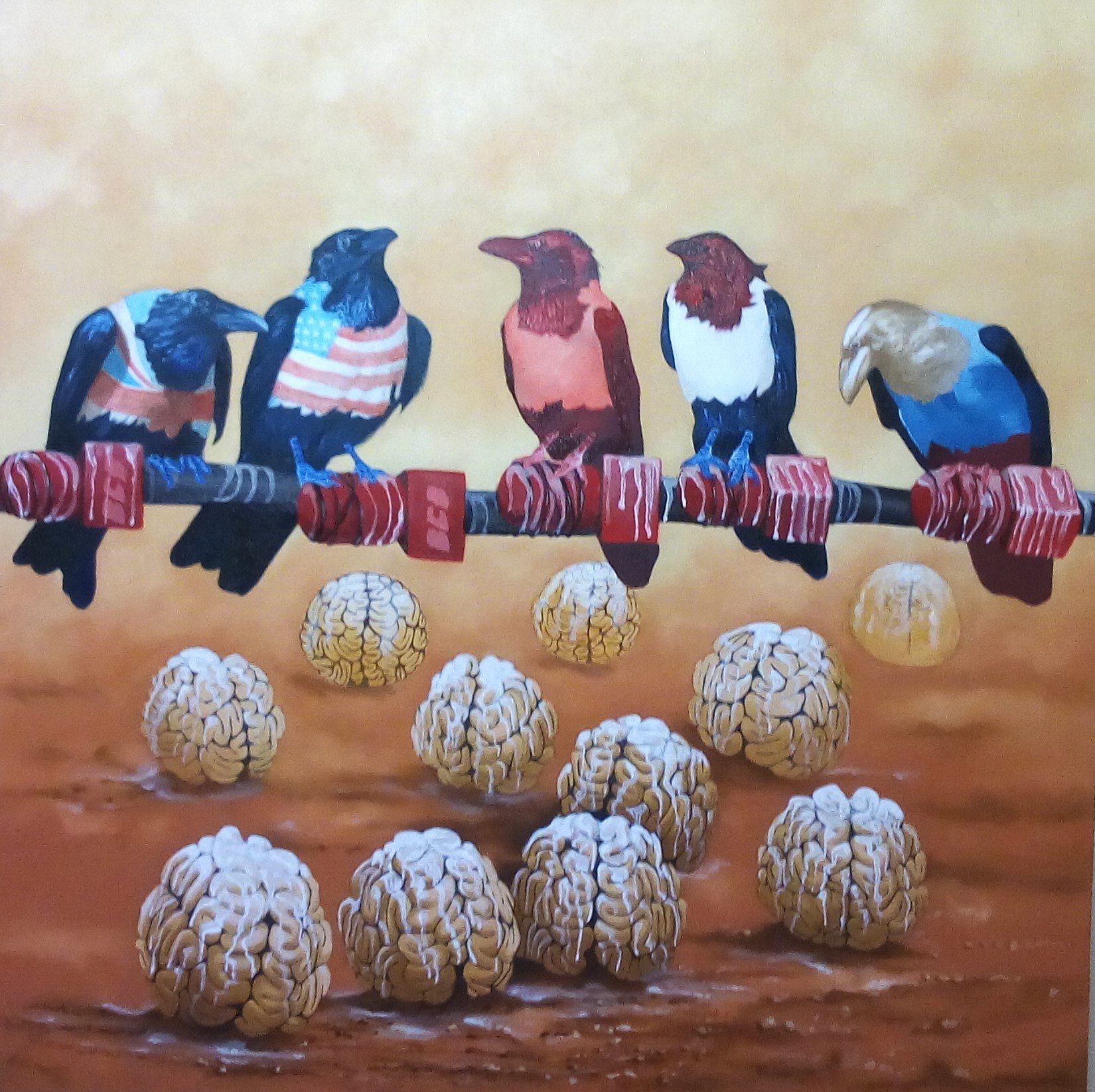 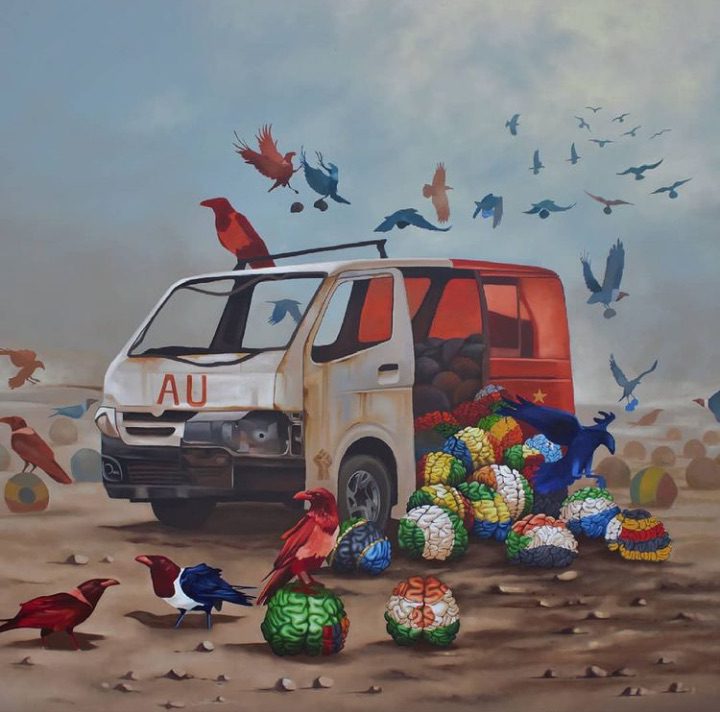 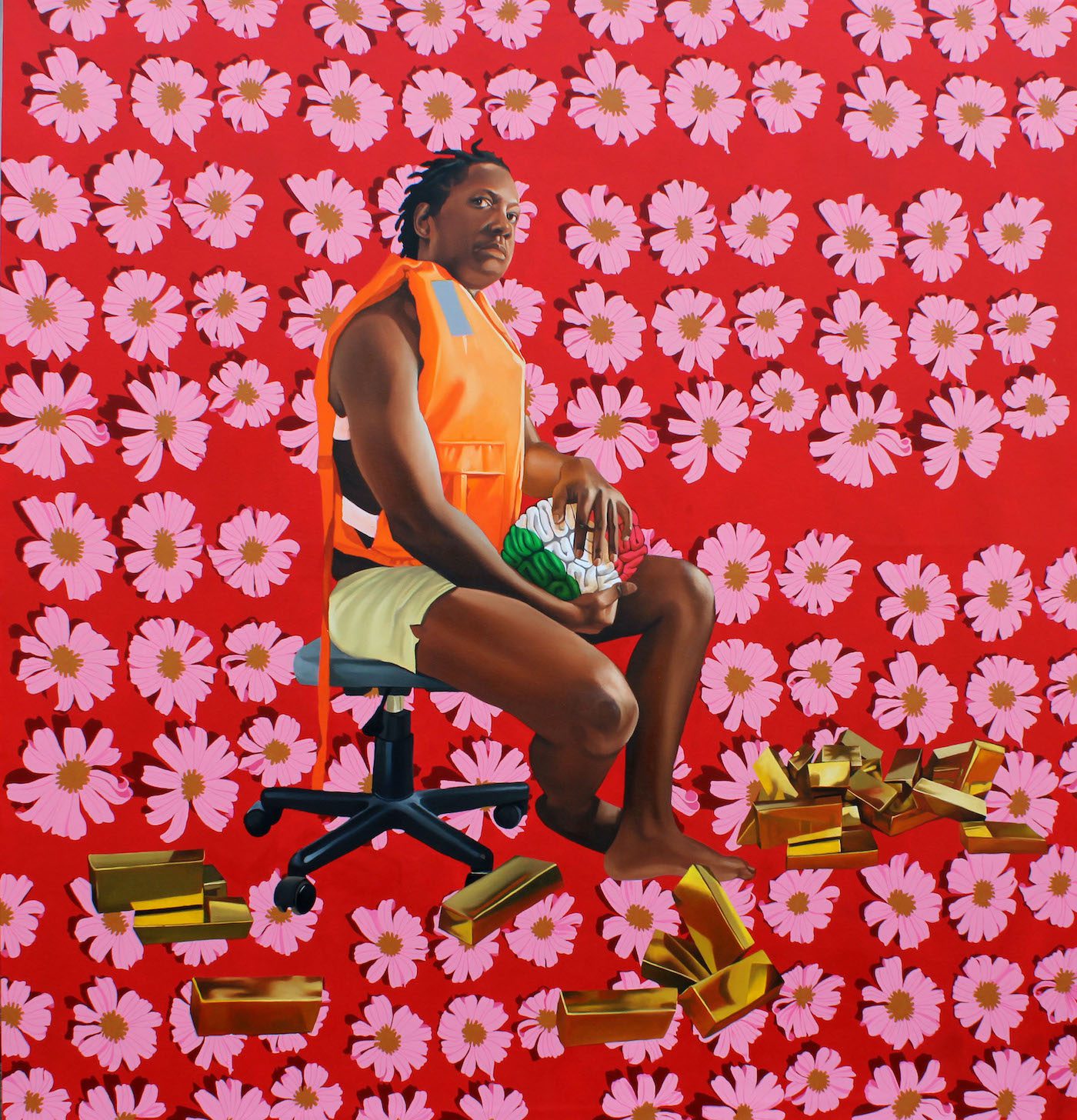 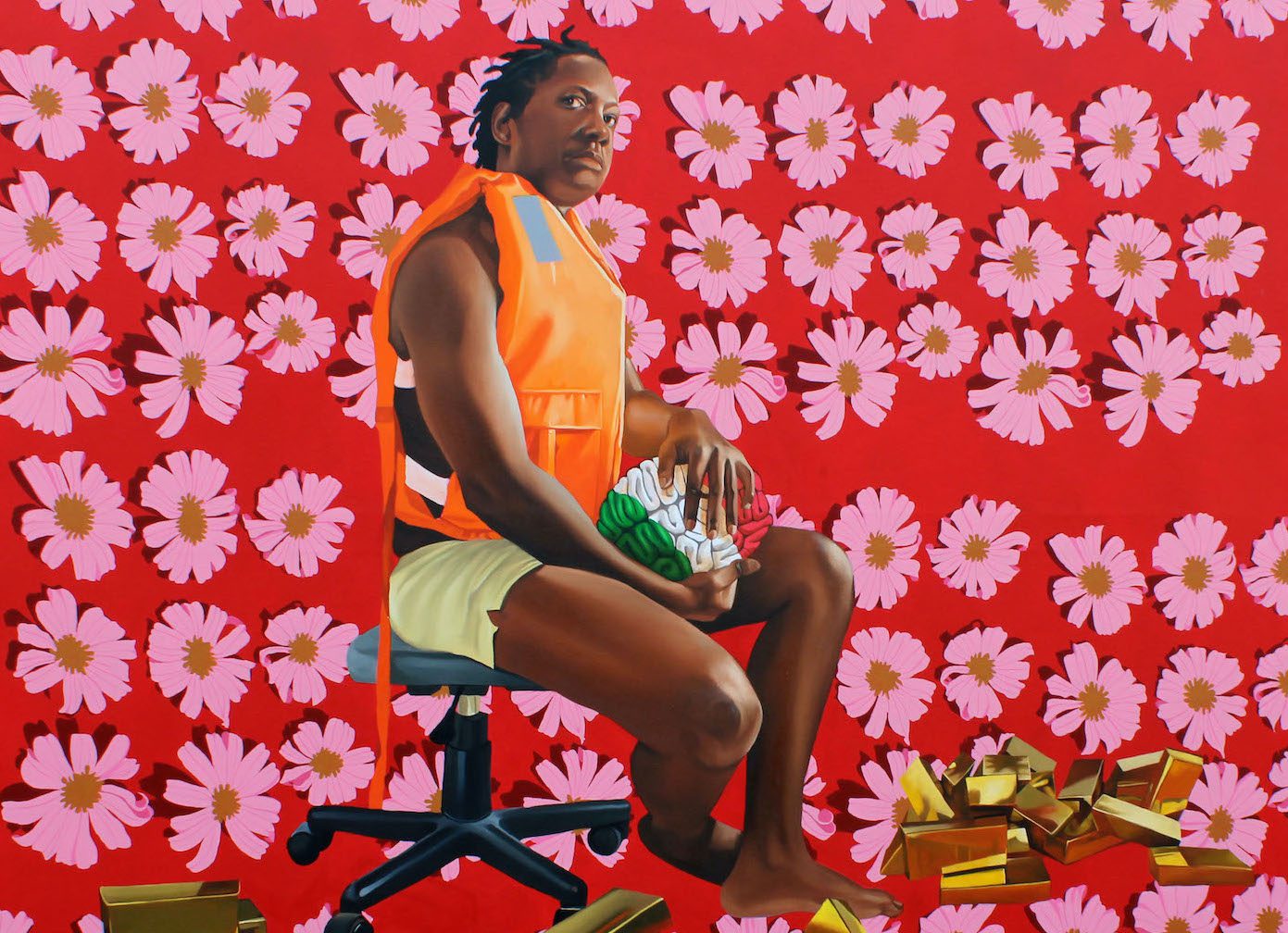 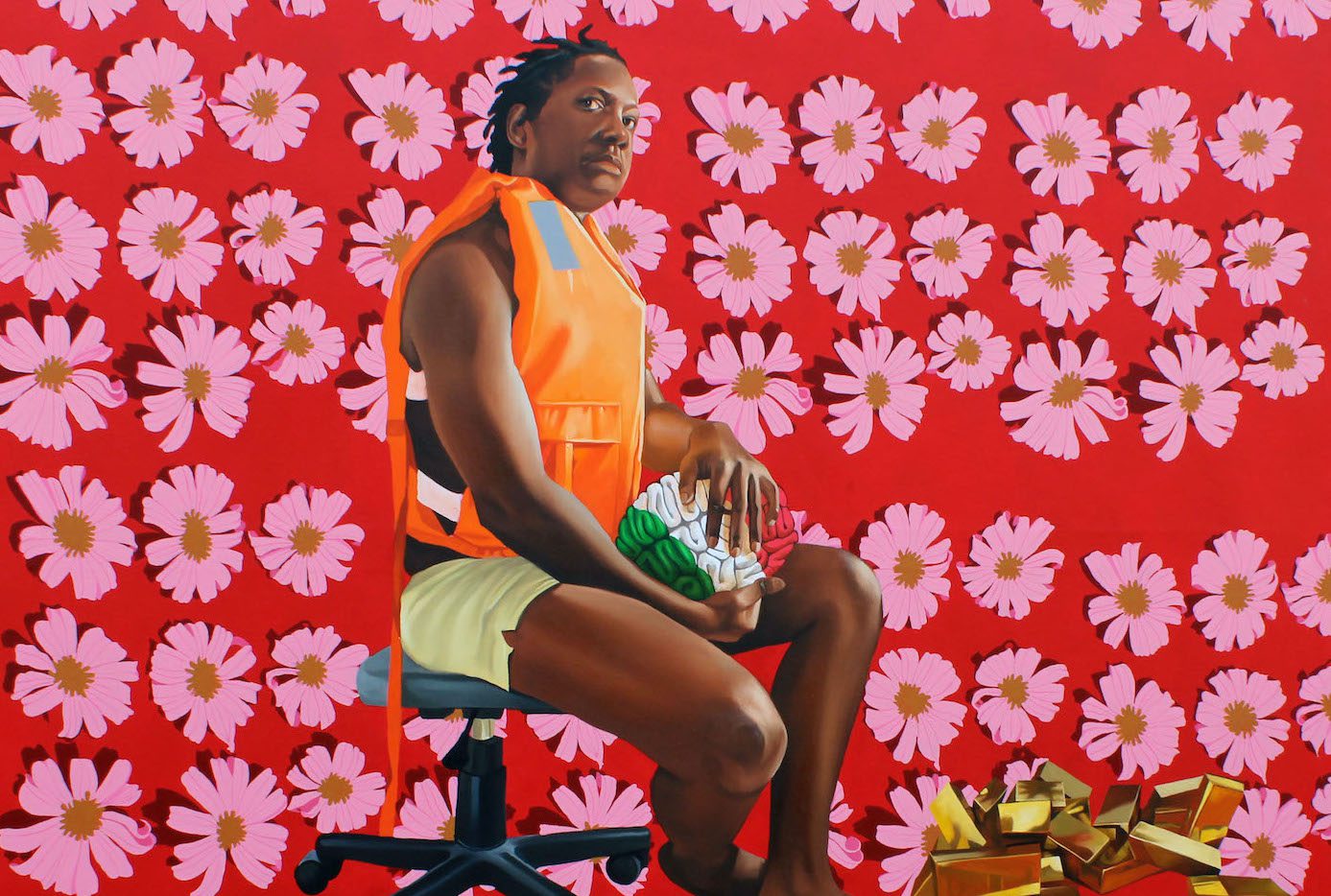 Makerere Art School graduate John Baptist Sekubulwa has been a practicing painter for seven years now. He started out as a wildlife painter, but for the past four years he has focused on developing a symbolic visual lexicon. From his Kampala studio he sends out paintings that debate global-scale sociopolitical injustices and unearth connections to the colonial past. His imagery denounces the contemporary economic sanctions imposed by the West to manipulate politics and societies in countries like Zimbabwe, Ethiopia, Burkina Faso, and Burundi, connecting these punishments to persecutions of journalists critical of the unjust structure of the political economy during the Cold War. His work marvels at the irony of political dissidents seeking protection in the same nations that were pulling the strings behind the scenes.

The large surfaces of Sekubulwa’s brightly colored paintings are marked by recurring cryptograms of Mexican sunflowers, pied crows – and the cerebrum. More and more stylized with every new work, Sekubulwa’s image lexicon has developed over time through the addition of new things like flags, metals, life-jackets, and human forms. The objects point to identities and themes. As patterns form, an increasingly complex language grows out of them. In one image a seabed of Mexican sunflowers is replaced by an African state flag, and in another a pied crow enrobed in the flags of the world’s superpowers is depicted shitting on cerebrums below their station.

The inclusion of birds and flowers in Sekubulwa’s paintings invokes local history and the contemporary surroundings in which they still hold meaning. The pied crow is a black-feathered bird with a glossy black head and a distinctive white collar from the shoulders down to the lower breast. Namungoona, as the bird is known in Luganda, flies in pairs or small groups. It scavenges around slaughterhouses and is known to follow bushfires to eat escaping insects.

Although Sekubulwa applies several different colors to his Mexican sunflowers, their common color in Uganda is yellow, and they are also referred to as Ekimyula for the ability to lighten the skin. The flower has long, narrow outer petals arranged around a yellow center. Mostly found in the countryside, it was introduced to Uganda as an organic way to restore soil fertility in barren farmlands. It is commonly planted among vegetables to attract pollinators. Before the advent of modern cosmetics, the flower was also used in the fattening room as bridal make-up, days before a wedding. The plant also has medicinal properties, helping with malaria and inflammations in the liver and throat. Sekubulwa seems to use the flower to symbolize brilliance, self-sufficiency, and fertility – the qualities that make it so highly sought-after.

Nothing sums up Sekubulwa’s attempt to reach the minds of his audiences like his depiction of brains – bared of skin and bone, exposed to the weather and worse. In a 2019 exhibition titled Brain Damage, he showed a series of paintings in which the brain was separated from the body – suggesting vulnerability but also a mind shift, a message of liberation. Sekubulwa focuses on the cerebrum, the brain’s largest part. The cerebrum controls the nervous system and the higher functions of the body – learning, reasoning and speech. We cannot not see, hear, breathe, love, or remember without it.

The brain requires maximum protection, which is provided by the hard bone of the skull and three tough membranes filled with fluid that act as a cushion. It is a staggering, painful sight to behold when Sekubulwa sensuously drags this delicate and extremely sensitive part of the body along hard ground, or in the sand, by a lake, or on a pile of stones. Or when he portrays it as wrapped in a cloth, or hanging before the barrels of loaded guns, or within sight of scavenging pied crows.

Sekubulwa’s metaphors dissect the unequal relations that exist between the West and sub-Saharan countries despite their remarkable histories and resources. The artist revisits imperial violence – a lucrative injustice that changes face but never runs out of fashion. Brain Damage and the ensuing series Life Jacket emphasize the faculty of the mind as the focal root from where liberation must start.

If the Cold War legacies are taking generations to dissipate, and people are still held captive by memories of that era, Sekubulwa indicts postcolonial Africa for its failure to revive traditional legal systems, and for allowing foreigners to settle our disputes through bodies like the UN and NATO.  He decries the subversion of Africa by foreign powers who finance wars on the continent and supply arms to those in unstable areas. “It is a naked lie to say there is hope,” some of his paintings seem to cry out: there can be no hope for the end of civil wars as long as there are exploitable minerals in the Congo rainforests. As long as our soil holds coffee, tea, or cocoa trees. As long as oil wells do not run dry and we are all wrecked, the white man will not stop.

Are there no lighter moments or benign themes to focus on, aside from grim images of Africa’s dystopian domination by the West, imperialistic economic policies, and wars instigated by erstwhile political powers? I imagine Sekubulwa retorting: “not until superpowers stop proxy wars and take their fights home to Britain, China, and the US – their own territories.”

Artists must continue to highlight the deplorable conditions of living in the former colonies, they must offer reflections on the link between the colonial past and those conditions. Painting, singing, writing. Everyone must use what they hold as a weapon to expose the injustice. It is the enduring reality of our past woundedness being hurled back at us. The hope is that by unwrapping and opening up these old wounds, we will find the appropriate prescriptions for our healing. It is the artist’s task to hold up the mirror so people can witness their folly in their own countenances, and hopefully set off on a transformation of the mind – a process of decolonization.

And despite the apparent hopelessness, the Ugandan artist also brings in references to revolutionary African forebearers in the mold of Julius Nyerere, Patrice Lumumba, Thomas Sankara, and Kwame Nkrumah. If only to remind us that courage and gallantry are not the exclusive property of foreigners, as colonial history suggests, but are also reposited in abundance in the heart of Africa.

Martha Kazungu, a former participant of Àsìkò Art School in Addis Ababa, talks to its founding…

In this piece, artist Karo Akpokiere draws parallels between the Bauhaus and his own experiences and…


Curriculum of Connections: Alle School of Fine Arts and Design