In Bamako, a group of young photographers engage a changing city.

Bamako, the capital of Mali, is situated along both sides of the Niger River and figures as a dynamic trade hub where diverse cultural and social influences converge. Due to an ongoing rural exodus in Mali, Bamako is one of the continent’s fastest growing urban areas. Like other African cities, it can be described as a complex configuration, in which the “postcolonial condition” manifests itself and is constantly renegotiated in various social, political, and cultural formations. Within this context, artists play an active role, consciously mirroring and questioning the places where they live. Emerging photographers are engaged with the city of Bamako, presenting contemporary outlooks on the urban environment and the experiences within it. Amsatou Diallo, Mamadou Sekou Kone, Oumou Traore, Aboubacar Traore, Seydou Camara, and Fatoumata Diabate, all in their thirties, not only depict Bamako, but also chronicle urban life, offering critical understandings of how young people see themselves, their city, and their connection to the wider world.

While Seydou Keïta, Malick Sidibé, and Abdourahmane Sakaly, to name just a few of the vanguards of Malian photography, became famous for their commissioned black-and-white studio portraits and reportages at festivities in Bamako, their successors diversified their approaches to photography: Mamadou Konate, Emmanuel Dao, and Racine Keita, who all trained in studio photography, began leaving the studio to use photography in more abstract or photojournalistic ways. Alioune Bâ and Youssouf Sogodogo, on the other hand, worked at the national museum, and their photographic practices were also influenced by a sense of cultural documentation. Today, many photographers have been trained by the Cadre de Promotion pour la Formation en Photographie (CFP). Most of these photographers no longer work in studios, but are active as freelancers, earning their livings by shooting marriages and baptisms, as did their predecessors, or taking pictures for NGOs. Yet, many also maintain independent work that often blurs the boundaries between art and documentary photography, creating new and personal visual vocabularies. 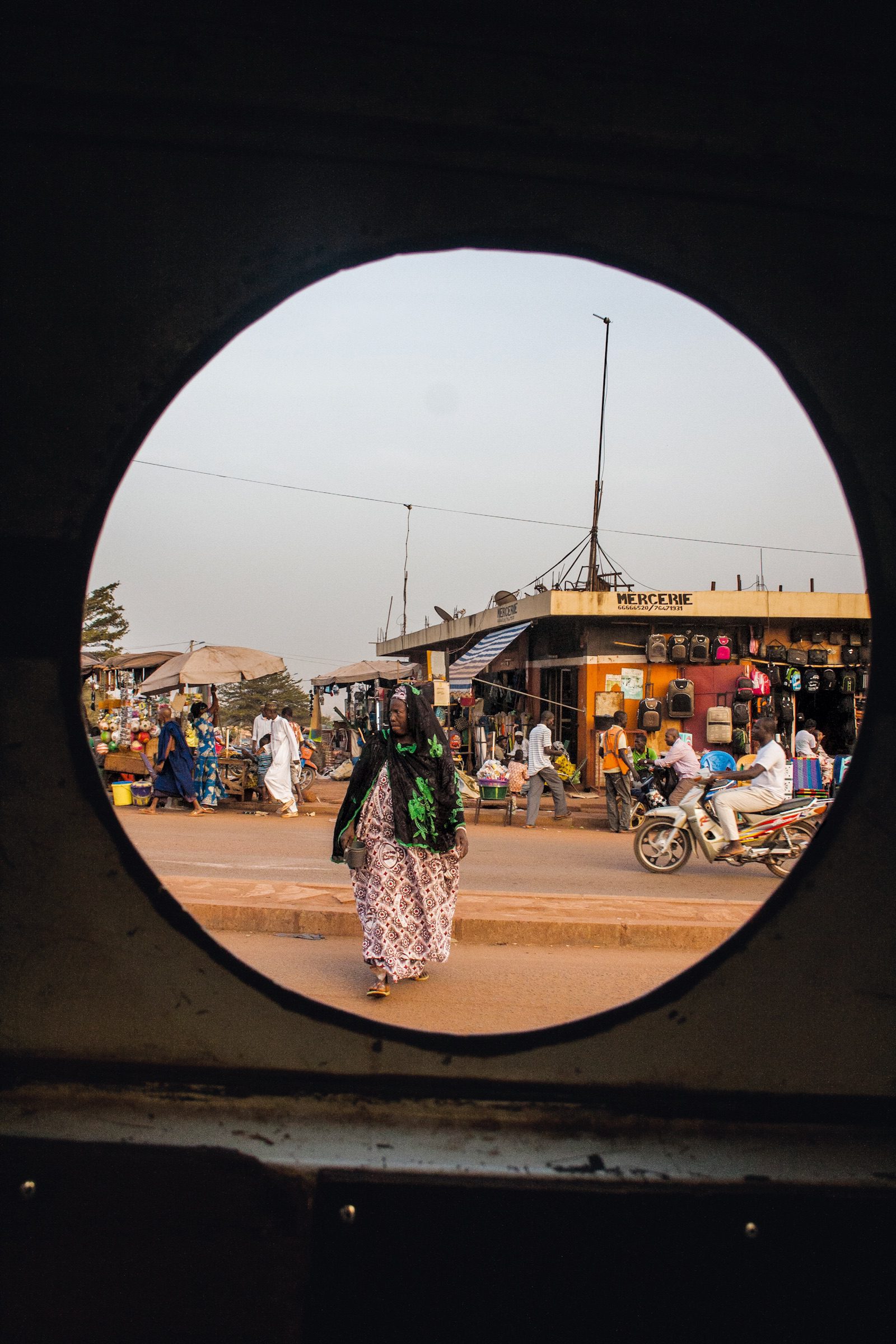 Amsatou Diallo, An elderly woman crossing a street in Bamako, 2016. Courtesy the artist

In the series Bamako—des fenêtres du Sotrama (Bamako—windows of Sotrama, 2016), Amsatou Diallo circulated for days in Sotramas, popular minivans, through the streets of Bamako. These vehicles are the city’s most frequently used means of transportation, allowing the majority of citizens to participate in broader city life. Through the differently shaped windows of the Sotramas, Diallo immortalized hundreds of small scenes of unspectacular urban life from the outskirts of Bamako to the city center: an elderly woman crossing the street, a small mosque with its speakers attached to the minaret, posters of the last elections hanging on a pole. By framing public urban space through these windows, Diallo highlights and celebrates scenes from everyday life. Many practices repeat themselves in small variations throughout a day. By doing so, they bring ordinary city life into being. The assembled incidental scenes suddenly reveal a bigger picture of the city.

While Diallo’s photographs explore Bamako during the daytime, Mamadou Sekou Kone’s Le silence de la ville (The silence of the city, 2016) explores Bamako by motorcycle late at night. His photographs reveal another side of the city, seen without its inhabitants, when citizens have withdrawn into private places and the public space presents itself as quiet, stark, and empty. Electric light reduces the view, bringing more static elements of the urban space to the fore: streets, bridges, and traffic signs emerge sharply under the streetlights; illuminated billboards, huge trees, and monuments loom out of the darkness. The black-and-white photographs are reminiscent of film stills. Their apparent timelessness dignifies the city, and, in the dreamlike state of night, boundaries and shapes blur, presenting a sense of placelessness. 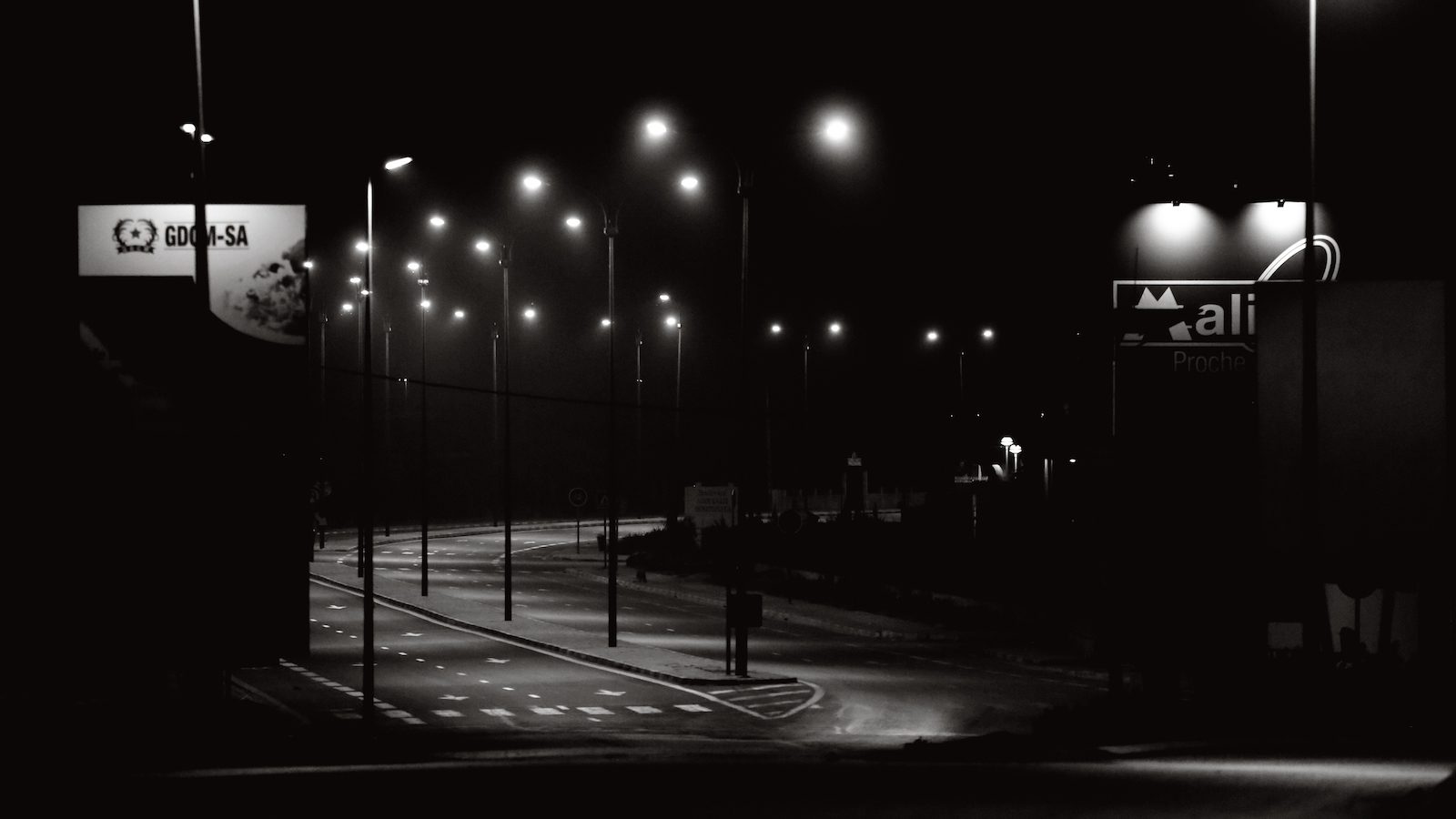 Highlighting an individual, personal level of experience in the city, Oumou Traore’s series Deux soeurs à Bamako (Two sisters in Bamako, 2016) focuses on the lives of two sisters who emigrated from the Dogon country to the capital to work as domestic servants. This subject resonates with Traore’s own immigrant experience of working as a servant to earn money to pay for her basic expenses, and the costs necessary for becoming a photographer. Her intimate portrayals of the lives of the two new arrivals unfold, from the inside and the private to the outside and the public. She follows the sisters from dawn to dusk, sensitively capturing the labor-intensive routine of the two domestic workers and highlighting the invisible roles they play in Bamako’s city life.

In the last few years, the unprecedented growth of Bamako has brought with it highly questionable practices of urban land management, where the powerful and rich often win out over the poor. Aboubacar Traore is a constant observer of the city’s evolving landscape. Between 2009 and 2014, for his series La porte de l’enfer (The gates of hell), he documented the demolition of houses and the expulsion of their inhabitants. In one image, the remnants of a family’s house can be seen days after its destruction, executed by goons who were acting under police supervision. Most of the family members had left to find temporary shelter with relatives. Traore’s photographs show an unsettling discrepancy between the destroyed infrastructure and the effort of three remaining sons who continue everyday life in the ruins, not giving up on their rights. The series reveals how some citizens in Bamako cope with constant uncertainty, where from one day to another everything can change and usually does. 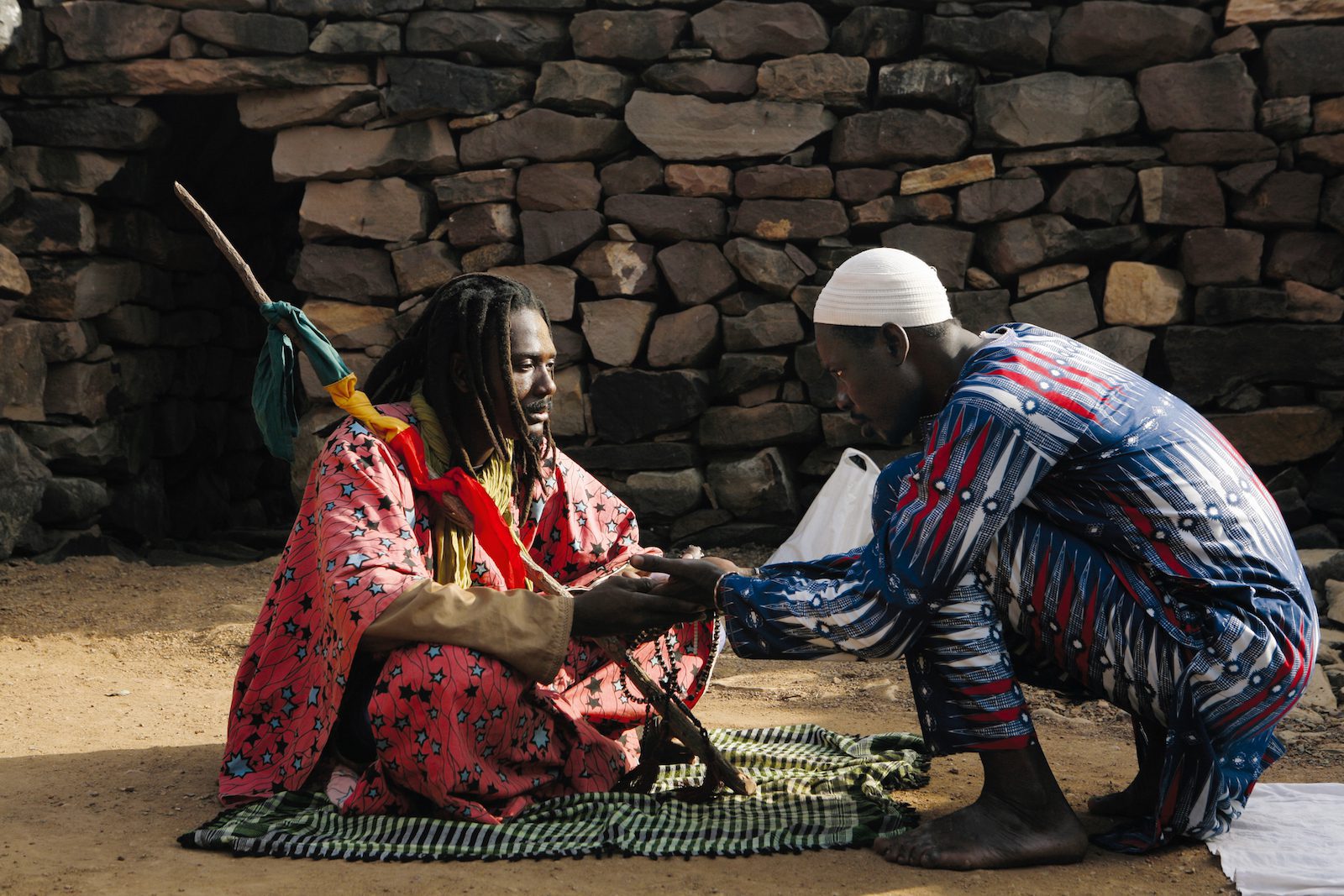 Seydou Camara, One of the sons of the late El Hadji Soufi Adama Yalcouye receives a worshiper in their mosque, which was built in the midst of the Niger’s riverbed, 2016. Courtesy the artist

As a participant in the Photographers’ Master Class, initiated by the Goethe-Institut Johannesburg and curator Simon Njami, Seydou Camara traveled to Khartoum, Sudan, in 2016. The class provided him with the opportunity to reactivate his long-term project Les Soufis (The Sufis), started in 2012, which looks at Sufi practices and how they are performed across Africa. Camara’s work delivers a careful and nuanced picture of Islam, with emphasis on the religion’s peaceful aspects. During his stay in Khartoum, he photographed dervishes who gathered at a cemetery to pray for their sheikh. Back in Bamako, Camara turned his lens toward Malian practices of Sufism, portraying the everyday lives of the followers of the late El Hadji Soufi Adama Yalcouye. Adama did not belong to an established Sufi brotherhood; rather, he practiced a fusion of Islam, Christianity, Dogon, and Bamana religious beliefs. Camara’s pictures illustrate the diversity, complexity, and liveliness of Sufism in Africa.

Mali’s famous studio tradition, however, continues to influence younger generations. In her project Studio Photo de la Rue (Studio photo from the street, 2013–ongoing), Fatoumata Diabate reenacts the famous Malian photography studios of the 1950s and ’60s. Inspired by the works of her Malian predecessors, including Seydou Keïta, Malick Sidibé, and Youssouf Sogodogo, but also the Cameroonian, Central African Republic–based artist Samuel Fosso, Diabate created a mobile studio, which she has installed in Bamako, as well as in the French cities of Arles and Montpellier. Clients entering this nostalgic studio are encouraged to choose props and clothes, pose in front of a textile backdrop, and spontaneously slip into other identities. The studio is a stage-like, open-air installation where the whole process becomes a performance. The final portraits create something of a playful time lag: Diabate’s twenty-first-century clients enter her small time machine, which transports them back to the golden age of studio photography in Bamako.

Franziska Jenni is a PhD candidate in the Department of Social Anthropology at the University of Basel.