The coincidences between the Latin American and African art scenes

C&: What brought you to initiate the 5-year project Transatlantic Connections?

Gabriela Salgado: I have specialised in Latin American art and have worked in the region for over fifteen years. In 2008 I took my first trip to West Africa to attend the 8th Dakar Biennale, and through conversations with artists and curators I realised that there were more coincidences than differences between the Latin American and African art scenes in relation to the mainstream, canonical art history and the market. I thus began to investigate the historical reasons for the lack of dialogue between Africa and Latin America in the visual arts field, and to build a practical template for cooperation between artists from both sides of the Atlantic. Reflecting upon these questions I realised how invisible the traces of the African heritage are in the art produced in most Latin American countries, something especially shocking in those places where large portions of the population are black or mixed race. I believe that in an attempt to please and be accepted by the international mainstream, our artistic production has self-colonised by consistently whitening and westernising its discourse. With the exception of the Havana Biennale, whose inaugural editions of 1984 and 1986 put an emphasis in exhibiting artists of the global south, most biennales and exhibitions in Latin America have turned their back to African art until very recently. Subsequently I initiated collaborations with Colombian organisation Más Arte Más Acción, Portes et Passages de Retour in Senegal, and Doual’art in Cameroon and realised three artists exchanges between 2012 and 2014. In 2013 I met Lucrezia Cipitelli who had previously worked in projects in Africa and Latin America and was researching the possibilities of an exchange programme between Afro-descendants from Colombia and African artists with a focus on urban and communitarian practice. We decided to set up Transtlantic Connections and to propose an artistic exchange to be included in the programme of the following Dak’art Biennale by collaborating with Association Cie 1er Temps and its dancers, strongly rooted in Ouakam and its community. 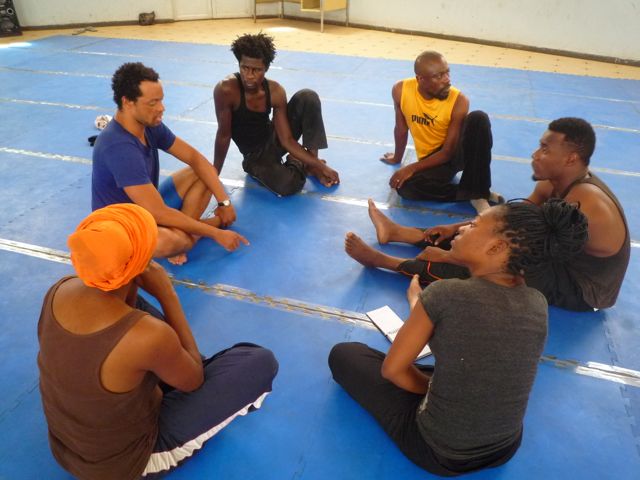 C&: How do you define transatlantic connections, these ties in terms of identity and movement/migration?

GS: Transatlantic Connections proposes an investigation of the historical precedents and potentialities of the interaction between Africa and Latin America in the visual arts, to link historical truth through innovative processes of resurfacing diverse knowledge and cultural systems while highlighting the foundational dialogues originated from the encounter between millions of Africans, Amerindians and Europeans in the Americas. In the visual arts, it appears that the impact of the multiple cultures that constitute our identity is hidden under layers of mirrors that reflect art production as continuous references to European modernity. To decolonise this way of operating and thinking, we propose a series of transatlantic connections, a distinctive type of international networking inspired by the decolonial theories of Walter Mignolo and Enrique Dussel.

C&: In terms of historization through artistic/cultural practices, what are the linking points between Africa and Latin America? Do you have any examples?

GS: What became apparent in realising the project with Brazilian dancer Benjamin Abras in Dakar is that the traditions of African matrix developed in the Americas – in this particular case in Brazil – are not necessarily identifiable in Africa. This is because the links to the original African cultures were affected by the very conditions imposed by the slave trade between the 16th and 19th centuries. Firstly contemporary Africans, clearly free from such trauma do not relate to that past, and secondly the mingling and consequent interactions of a great number of ethnic groups in the Americas made it impossible for clear-cut traditions to remain unchanged. Nonetheless, the fascinating outcome of the Dakar exchange resides in the magic of dance to merge the ancestral symbolism of Brazilian Candomblé with the local animist worship as well as hip-hop and sabar, (the traditional dance from Senegal) and to engender a new artistic language, fruit of a multifaceted dialogue. In this way, all the artists involved learnt from and influenced each other, exploring novel ways of increasing their creative potential.

C&: What is your outlook on South-to-South connections in the context of international art?

GS: The role played by artists from non-western countries in challenging the spaces of visibility and the lack of connection between cultures that have a great deal in common must not be underestimated. The South has the potential to provide an active levelling in a moment where international markets and institutions are both avid to exploit and positively include other cartographies in their game. In the case of Dak’art, a Biennale conceived as a Pan African event twenty years ago, there is an apparent vacuum in terms of the Latin American presence, given that the concept of diaspora generally involves only the English and French speaking Caribbean and North America. Additionally, with the intensification of interest in African art, transatlantic connections should become more common, as artists in other regions of the world are becoming curious of the phenomenon and willing to explore what is being done in Africa.

C&: With this idea of shifting parameters, how do you consider the role of biennials, festivals as well as travelling projects?

GS: Biennials and festivals are useful meeting points that serve networks of artists and curators, institutions and independent professionals alike. They are the food of the art system, where we go to see new work and meet people, but unfortunately they have material and time limitations. The ideal scenario would be to produce biennales committed to develop meaningful lasting links with the host cities, as they are often criticized for their disconnection from the day-to-day life of the population, who looks at the events with contempt, seeing them as tourist attractions. To counter this, I can cite two southern events that attempt to make a difference. The Mercosul Biennale in Brazil is an example of sustained artists’ interventions and pedagogical projects happening between editions. In Africa, the Lubumbashi Biennale in the Democratic Republic of Congo is also extending its remit from the model of the biennial exhibition to a longer programme to provide critical and professional tools to local artists and the cultural leaders of the future. These examples are seeds of hope for a shift in mentality.

Gabriela Salgado is an Argentine-born curator based in London. She holds an MA in Curating Contemporary Art from the Royal College of Art. She has curated a large number of exhibitions including La Otra Bienal in Bogotá, Colombia (2013) and the 2nd Biennale of Thessaloniki, Greece (2009). She is currently directing a programme of exchanges for African and Latin American artists.