The Stories Between Us

Rachel Marsden reflects on the symposium The Work Between Us exploring Black British artist and exhibition histories.

‘The Work Between Us: Black British Artists and Exhibition Histories’ [The Work Between Us – Full Symposium Programme] was held at The Bluecoat, Liverpool. This is a research context that I would not usually jump into (especially right at the end of my PhD) however, it examined contexts of curating and translating (trans)cultures, and the placement of Chinese arts under the umbrella of “black arts” in the 1980s…the latter I am very interested to know more about, especially in relation to the languages used to define Chinese art in the UK at that time.

Sonia Boyce began the day with ‘Presumed Outside – The Other Story and Exhibition Histories’. The Other Story was a national touring exhibition at the Hayward Gallery in 1989-90 curated by Rasheed Araeen. It was a contribution of African and Asian diasporic artists to modernism and contemporary art…then “groundbreaking”. How they relate to modernism and how they have contributed to the story of twentieth century art. At a time preoccupied with race and racism…where was the “elsewhere” situated and how was it different to the “here”…how did it relate to the artwork and institutional racism?

At that time, Brian Sewell was the critic of the year – his words were taken seriously. Modernism’s ambition was that it would be seen as a universal language…who can speak the language of modernism, its modernist terms…and who was outside of this “language”.

1989 was an important year socio-politically and culturally. Although The Other Story is seen as a key exhibition of black arts, contributing to the history of black arts in the UK, it is also seen as a parochial event in art history….the most requested archive in the Hayward archive collection. 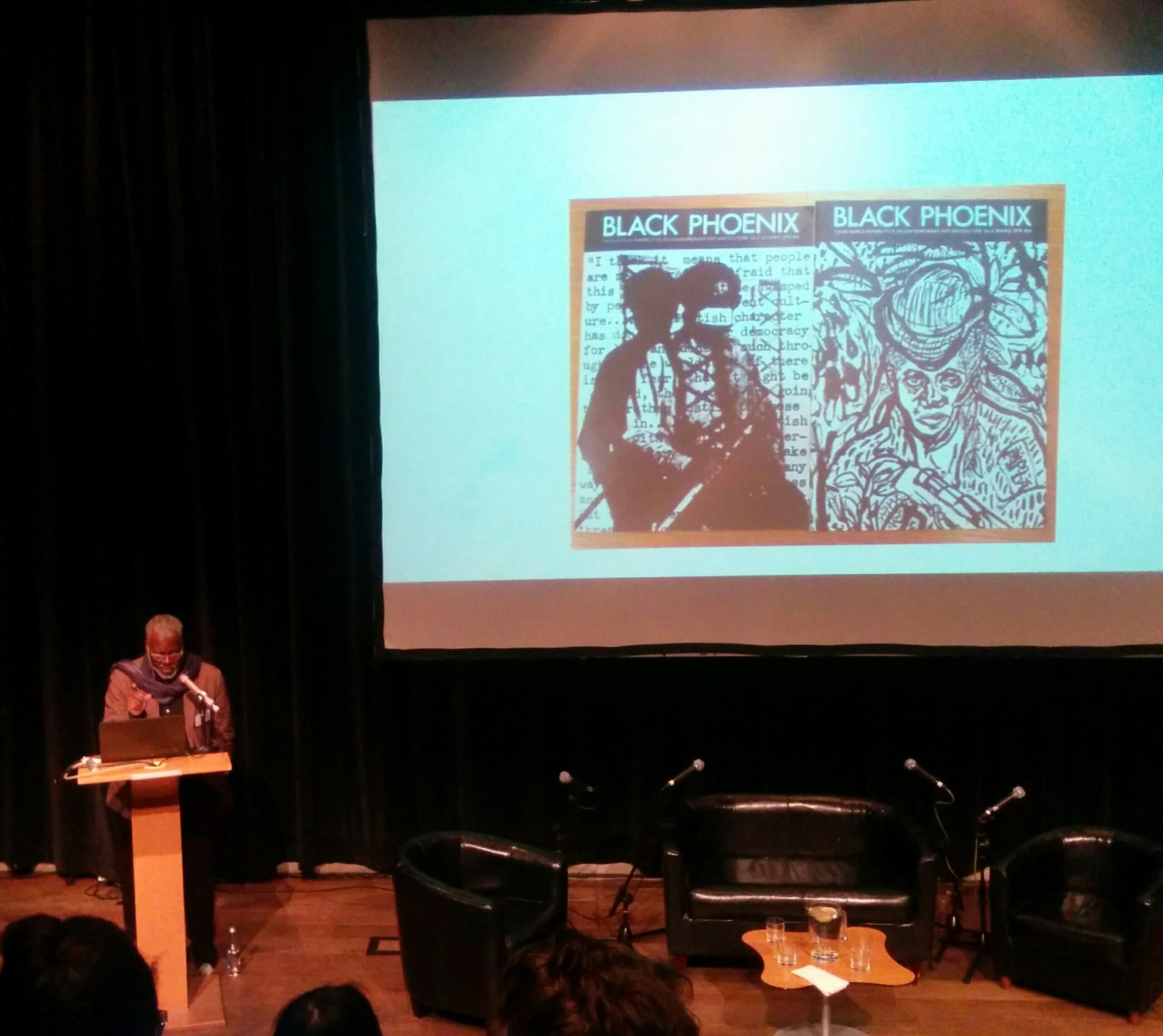 Paul Goodwin, The Work Between Us. Photo by Rachel Marsden

The exhibition was a ‘tricky contraction and unity of Afro-Asian artists of post-war Britain.’

She cited a case study in comparison to The Other Story – Multiple Modernities 1905-1970 at Centre Pompidou in 2013 [PRESS KIT MULTIPLE MODERNITIES] and understandings of “PRIMITIVISM”. She noted phrasing and descriptions – the centre versus periphery, the artists as manipulators, exoticism and “otherness”, older versus younger artists, colonial views, relentless assaults of devaluation, primitive and primitivism, and occidental art. 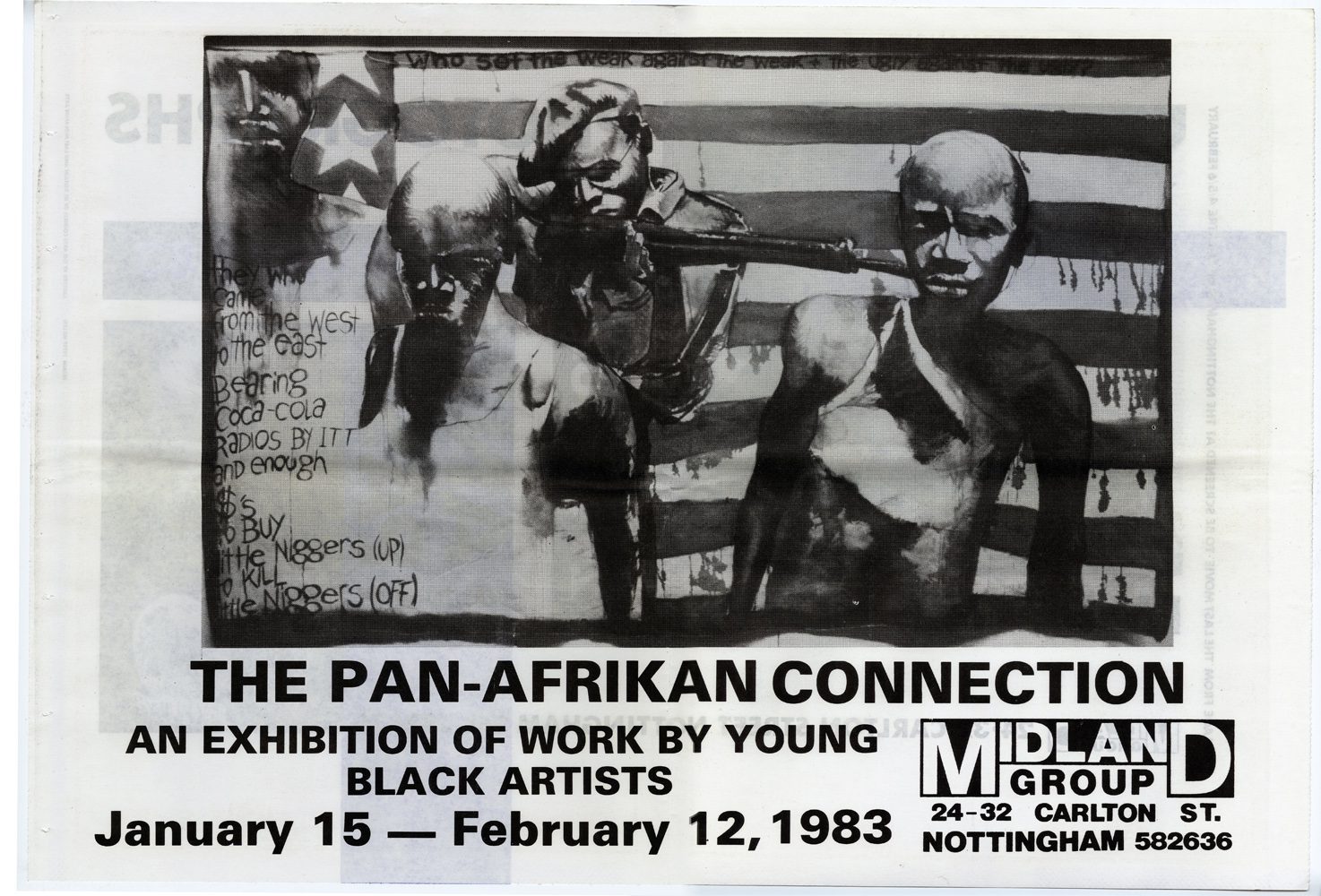 The final paper before lunch was ‘Where are the Asian Artists? The Horizon Gallery Responds to The Other Story’ by Alice Correria. She opened by discussing who and who wasn’t selected for the show and the palpable tension at the opening…specifically over the lack of South Asian artists and those artists who had migrated to, not been born, in Britain. She questioned why exhibitions of this kind are necessary in relation to the work of the Horizon Gallery, London. According to Rasheed Arareen, The Other Story was ‘never meant to be a contemporary art show but a historical exhibition’. Horizon Gallery was initially seen as a space of defeat (in response to setting up a space explicitly for Asian art), not interested in questioning the system and representative of only their cultural backgrounds. What impact did the Horizon Gallery have and its legacy?  It offers us access to another “other story” that is waiting to be written.

Whilst image searching, I came across this poster for the 1983 exhibition The Pan-Afrikan Connection. After the mornings words and deliberations, it made me consider the role of language, terminologies and definitions in defining, creating and (mis)translating an art history, here black British artists and exhibitions histories.

Questions unravelled in my head on this and in relation to the perspectives on The Other Story:

Funnily enough some of my thoughts were raised by other audience members in the end of morning panel, where discussion unfolded into questioning:

After a far too brief blue sky wander through Liverpool over lunch, Anjalie Dalal-Clayton began the afternoon with ‘Re-Cognising Black Skin/Bluecoat’, a case study of the four-week exhibition in Liverpool in 1985. 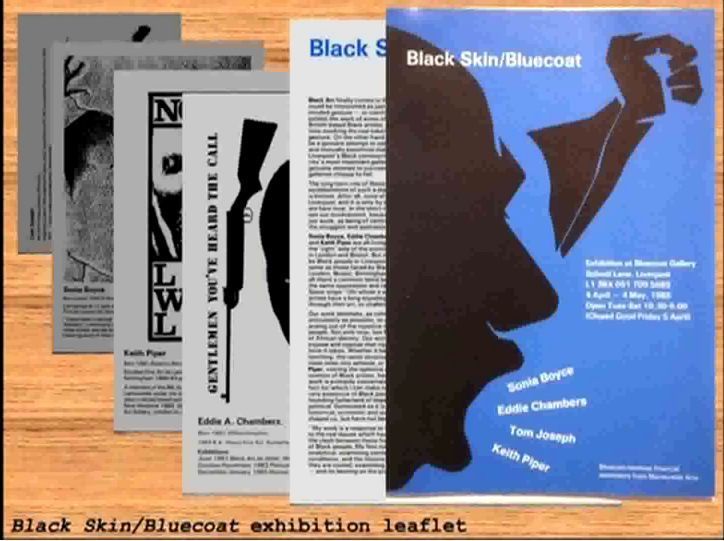 “There is limited mileage in collectivising and exhibiting the work of individuals linked by no other factor beyond the colour of their skin. If ‘INTO THE OPEN’ is to be seen as it is, an important first step then once in the open, individual Black artists should be given access to the type of total control” – Keith Piper

The catalogue was to act as a form of consciousness raising versus looking into the politicising of black people. The representational and referential as part of the exhibition showed its relationship to 1980s avant-garde. What happens to our memory and understanding of an exhibition if we look at media, style, the artists and lineage? Text and image beyond linguistic tradition from printed, typography and hand-written texts creating a double narrative arch both visual and textual, AND personal and political. Here, modernism was the appropriation of culture and the society at large, appropriating the status quo. Text was conceptual through vision rather than perceptual through language.

Jean Hui Ng, the new research curator at CFCCA presented ’30 years of exhibitions at the Centre for Contemporary Chinese Art’. Bluecoat turns 300 next year versus CFCCA turning 30 this year, which put things into perspective. CFCCA originally began as the Chinese View festival in 1986, then the Chinese View Arts Association in 1988, organising workshops for Chinese children to understand their own Chinese heritage…celebrate their culture and way of life. At that time, the Arts Council coined African, Asian and Chinese Arts as “black arts”.

Focussing on its annual festival, to space in the northern quarter, now to its RIBA award-winning space in Manchester’s Northern Quarter. In May 1992, Chinese Arts Centre opened the project ‘Beyond Chinese Takeaway’ acknowledging there was very little recognition of the talent inside and outside of Manchester’s Chinatown. Then more of a cultural centre, it moved into a new space on Edge Street to become more of a visual arts centre. Locations and dislocation of Chinese art across the world…web of knowledge began to develop CAC began to show artists outside of China.

“Assessing the cultural through a critical lens of pastiche and parody.”

Open the debate of the role of Chinese arts and it’s relationship to the black arts through conferences (‘RE:ORIENT, RE:ACT’ and ‘New Moves’ (1999) at V&A). Umbrella terms of cultural diversity and black arts were too broad for the contexts within which they worked. A new vocabulary for Chinese art…consolidate and rethink…build a larger narrative for Chinese art. Jean cited the work and projects of Suki Chan and Xu Bing as examples of visual hybridity, including cultural objects, which were placed in a liminal hybrid space of political, social, cultural and colonial histories.

‘The Image Employed: the use of Narrative in Black Art’ was a conversation rather than a paper presentation between Bev Bytheway, Keith Piper and Marlene Smith, moderated by Alice Correia. They spoke about their mutual experiences of the exhibition ‘the image employed‘ (1987) at Cornerhouse, Manchester. What are the images and objects within black arts doing? Questioned in relation to the “image employed” or the “image deployed”. The exhibition functioned as a proposition. In terms of the title, it was a tension and gap…where the subtitle would also shift the direction of the exhibition and would change the ways in which the artists responded and also the writers, writing about the show. The idea of a strategic anxiety at that moment that was shared by practitioners at that time…how do you approach or leave a trail of your discourses in a gallery? Was it a tokenistic gesture on behalf of the gallery? It arose from a set of intimate conversations and friendship groups where it could be seen as nepotism…whereas Keith Piper saw it as a growing set of responses to those social spaces – a recognition of these groups of people, ideas generation through conversation. It was reflection of the current debates at that time.

Time for the final plenary session…opening with comments from Nina Edge:

Leon Wainwright responded to these set of questions speaking of his academic experience since 1997 and research into Caribbean artists. Historiography and canonisation are about archiving and recollection. There were ways in which black and asian artists contributed to the academy in 1980s and early 1990s. What kinds of “histories” have been used as exhibition approaches? The rhetoric of multiculturalism relating to funding patterns were banded together in an ideological fashion…it is our role to transcend this and find value beyond this and balance our problems of difference and division along racial lines. There has to be something more about art-making, another basis for understanding for these kind of exhibitions that go beyond social and racial explorations. It is about brokering social relationships and acknowledging changes over several decades.

Susan Pui San Lok stated some of the most interesting things happen between the exhibitions through the conversations and dialogues. She acknowledged the strategic alignment of Rasheed Araeen’s work now part of the Asia Art Archive in Hong Kong, now in a place that reminds us of the narratives of colonialism and imperialism. She referenced back to Jean’s paper and the subsumption of Chinese art under black arts…this was a bureaucratic arts administrative categorisation only and reminded her of Sarat Maharaj’s multicultural managerialism. There are Chinese shows and interrogations on why the categories and distinctions succeed or fail. An exhibition history that hasn’t been spoken about today that speaks more of subsumption is Lesley Sanderson’s exhibition These Colours Run (1994), another show that highlights the problematic reductive readings of black art and art of colour.

This article was first published on the author’s blog, Rachel Marsden’s Word.

Rachel Marsden is an arts writer, curator, researcher and educator.