The Promises of a First Edition

From June 1 to 3, 2018, Douala, Cameroon’s economic capital, hosted the first contemporary art and design fair ever to be organized in the country and in the Central African region. The event provided the opportunity for dozens of Cameroonian visual artists - who have an international reputation but are often barely known in their own country - to present their creations to interested visitors. Was Douala Art Fair, in its first incarnation, a stroke of genius?

The esplanade of the Canal Olympia cinema in Bessengué, a well-known neighbourhood in Douala, championed another form of artistic expression from June 1 to 3, 2018. For one weekend, the “seventh art” made way for the plastic arts. Paintings, sculptures, performances, and other visual events enlivened Douala for three days as part of the first-ever fair dedicated to contemporary art and design organized in Cameroon.

Dubbed “Douala Art Fair,” this unprecedented event supported by the creative communication agency Omenkart, headed by the young Cameroonian entrepreneur Diane Audrey Ngako, had a number of stated objectives. As a Cameroonian curator and commissioner of Douala Art Fair, Landry Mbassi explains, “The first edition is in keeping with the idea of reaffirming the major part Cameroon’s economic capital plays in contributing to the visibility of this amazing creative output, which is exuberant but tends not to be promoted so much at the local level. It’s no longer a matter of its promoters putting out an alert as a call for action but rather of an appeal to potential collectors, gallerists, commissioners, foundations, musuems, etc., with a proven interest in contemporary African creativity.” 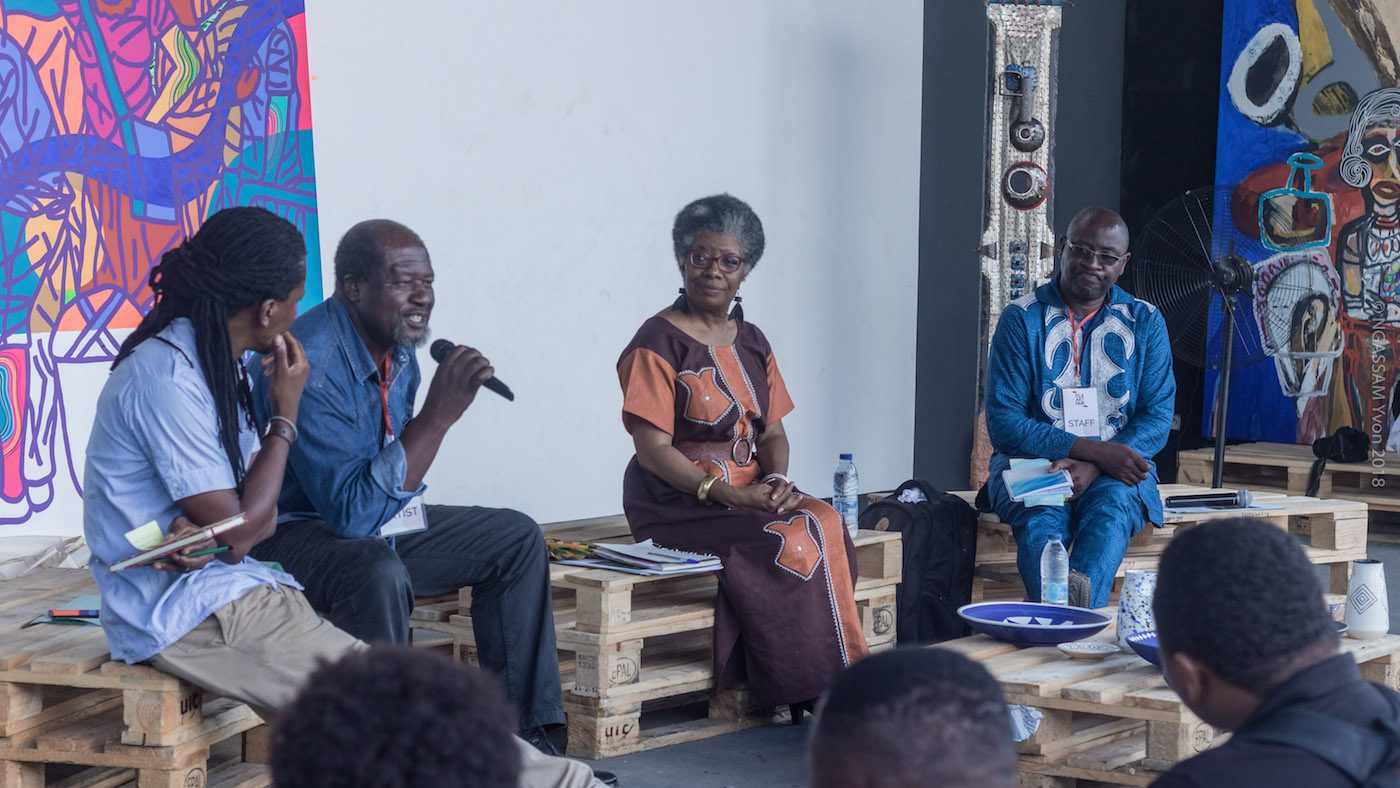 The primary aim of this initiative is to reveal the talent of Cameroonian visual artists, who find themselves at the center of an intriguing paradox. Famous names, exhibited in the largest galleries on the planet—among them Joël Mpah Dooh, Barthélémy Toguo, Boris Nzebo, and Bili Bidjocka—are still relatively or completely unknown to the domestic public. Douala Art Fair offers a new point of contact between an elitist realm and the inhabitants of Douala, who, acclimatized by events like SUD, are gradually getting used to living with contemporary art. Many Douala residents coming to the fair were thus full of curiosity to discover the forty or so works presented there by some twenty artists. An impressive open-air symphony. Another special feature of the Douala Art Fair is that it is an outdoor exhibition showing the lion’s share of the work produced by the actors representing the contemporary scene in Cameroon.

In the course of a surprising journey that was sometimes mystifying, visitors to the site were confronted with the artistic identity of the visual artists and their way of looking at the world through their work. Each section of the large show was an exhibition in itself! The arrangement of the works devised by the commissioner of Douala Art Fair gives a sense of walking through a house full of doors opening onto various exteriors, each with its own distinctive features. On the evening of Sunday, June 3, 2018, the works, stationed under tent canopies, were subtly illuminated by spotlights, helping guide people through the show and inviting them to immerse themselves in an exploration of contours, curves, and colors.

Béatrice Yougang pays homage to the feminine: her paintings stage elegant ladies, poised on high heels but also very much of their time, nestled between modernism and tradition. Jean David Nkot continues his research on immigration, showing massive feet advancing with giant strides toward an “elsewhere” that they hope will be better, different. In this space, brimful of talent in a variety of disciplines, generations of Cameroonian visual artists meet without clashing. Quite the reverse, they share a common vision.

At this new fair for contemporary art and design from Cameroonian and Central African perspectives, there are no boundaries between the work of Koko Komégné and that of Barthélémy Toguo, Tally Mbock, Marc Padeu, Yvon Ngassam, and a number of others. This first “experimental” edition—as it was described by the organizers—achieved its aim of presenting three days of contemporary discovery and buzz. The second edition, which could turn out to be one of the most anticipated events of the next months in Cameroonian contemporary art, would give concrete form to this experiment.