The Double Life of Kenya at Venice

‘The Shame in Venice’ by Kenyan artist Michael Soi

Kenyan artists, filmmakers and writers have taken to social media to express their outrage after it was announced that six of the eight artists selected by Italian curator Paola Poponi to show work in the Kenyan Pavilion at this year’s Venice Biennale will be Chinese.

Artist Michael Soi, who documents the nightclubs of Nairobi and the growing social relationship between China and Kenya, responded with a painting titled ‘The Shame in Venice 1’; whichdepicts the alarming ratio of Kenyan to Chinese artists in the proposed exhibition. The storm of protest resulted in both an online petition,and a group visit to Hassan Wario at the Ministry of Sports, Culture, and the Arts in Nairobi by Kenyan arts managers.

This is the second time that Kenya has hosted a national pavilion at Venice stocked principally with Chinese artists. In 2013 Poponi selected 11 artists, only only two of whom were Kenyan (Kivuthi Mbuno and Wangombe Wachira. It was reported by the US media organisation NPR that Italian hotelier and longtime Kenyna resident Armando Tanzini is the main force behind the Kenyan Pavilion and secured Kenya’s place at the biennale without the help of Kenya’s arts ministry. “The government of Kenya, they don’t know about this important exhibition, the Biennale,” Tanzini said. “I triedseveral times to help them to understand.”

Attempts by cultural practitioners, including curator Jimmy Ogonga, art entrepreneur Danda Jarolmjek, artist Justus Kyalo, cultural manager Maggie Otieno, and author Binyavanga Wainaina to meet Minister Wairo on 20 March proved unsuccessful. The meeting was to engage the minister on the issue of this year’s Kenya Pavilion in Venice. According to Wainaina, the minister did not show up for the pre-arranged meeting. Wario’s absence – and perhaps indifference – shows the lack of interactionbetween Kenyan artists and the public sector. It also highlights the difficulties facing Kenyan artists wanting to engage with international arts eventslike the Venice Biennale.

Poponi’s 2013 exhibition was heavily critiqued for its selection of predominantly Chinese artists. Little attention was however directed to the ‘token’ Kenyan artists, Mbuno and Wachira. Writing in The Art Newspaper, Wenny Teo stated: “The charming, native pastels of Mbuno and Wachira’s batik-like floral paintings appear somewhere in the mix as token examples of ‘authentic’ Kenyan art.” She described the selection as “Primitivism at its worst.” The article raised some concern about the expectations projected onto Kenyan artists, or perhaps why “native” pastel painting was showing at an international art exhibition. Teo’s discussion of “how” Kenyan artists arrived at Venice keys into a larger conversation about artistic practice in Kenya, which enjoys little or no public sector support, and the histories of traditional art schools and expatriate patronage.

In 2013, Joyce Nyairo, a well-known cultural commentator based in Nairobi, challenged Kenya’s arts ministry about Poponi’s appointment in an article in the Daily Nation. After describing Poponi as an “ unknown in local art circles,” Nyairo asked: “Did the Ministry of Sports, Culture, and the Arts appoint her to this role?” Wainaina repeated this question in a recent article published in March: “Has he [Wairo] called the Kenyan embassy in Rome? Has our Minister of Culture spoken to the Italian ambassador here? Has he investigated to see whether his own office is complicit in this fiasco?”

Organised by art consultant Danda Jaroljmek , a former director of director of the Kuona Trust, the auction doubled as a large-scale survey exhibition of East African modern and contemporary art. The auction included work by Mbuno, the so-called “native” painter included in the 2013 Kenyan Pavilion, alongside work by contemporary artists. The positive receptionof Mbuno’s work highlighted, more so than Poponi’s misguided efforts, the important place of Kenyan (and other East African) modernists, including Joel Osweggo and Samuel Wanjau. 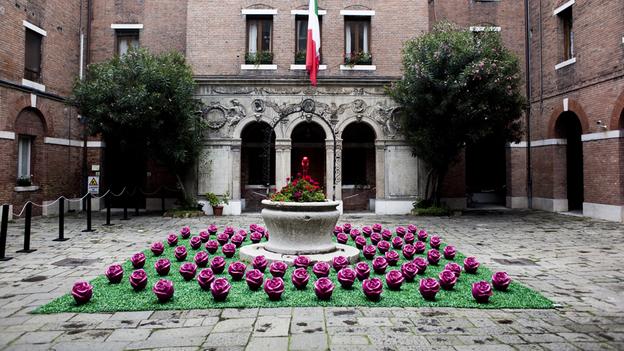 In the early 1990s, following a research trip to Makerere Art School in Uganda as part of her survey exhibition ‘Seven Stories of Modern Art in Africa’, held in 1995 at London’s Whitechapel Gallery, curator Clementine Deliss wrote about the “mythologies cast into the work of Kenyan and Ugandan artists”. Deliss found the animalistic and apocalyptic nature of paintings she encountered disturbing, and likened them to those of early European painters Hieronymous Bosch and Pieter Bruegel. “These large paintings on hardboard with their Bosch-like imagery of mutant humanity and nature devouring itself are so closely interconnected that to see them together and in the context of works by neighboring Kenyan artists is an extraordinary experience,” she wrote.

Mbuno’s work deserves reappraisal. Take his painting ‘Kamba Hunters’ (2011), a brightly colored landscape study depicting two stricken hunters wearing animal skins in a savannah. A large snake moves across the scene with a small goat in its mouth; a leopard has its teeth sunk into the snake’s back. The rocks in the distance and massive stream bring to mind Kenya’s rift valley. As a young man Mbuno worked in the safari industry, which exposed him to distant and wild landscapes and nature, after which he picked up painting, working under the patronage of expatriate Ruth Schaffner of Gallery Watatu.

Once Nairobi’s leading gallery, most of its artists were “self-taught”. According to the art historian Sidney Kasfir, “Schaffner’s relationship with her artists was “complex and familial” despite her reputation as an “astute businesswoman”. Aside from Mbuno, other Watatu artists – including Sane Wadu and Richard Onyango – have had work shown on various international exhibitions including the first Johannesburg Biennale (1995) and Africa Remix (2004).

Chinelo Okparanta, author of the novel ‘Happiness, like Water (2013), said recently at a writing conference in Kampala that she does not accept the notion of existing in an in-between space. Instead she thinks of her life as a constant negotiation between two worlds: Nigeria and America. Likewise, Kenyan artists are struggling with this notion of negotiating two worlds. While celebrated at Circle’s 2014 art auction, Mbuno was derided in Venice for his apparently “primitivist” work. With little prospect for revising the selection for this year’s Kenyan Pavilion, it appears that the 2015 Venice Biennale will not be an in-between space for Kenyan artists to present themselves as equals.