The Artists Censored in Cuba Speak Out

From the outset, the 13th Havana Biennial – the Construction of the Possible – was haunted by the specter of a new law aimed at controlling artistic production. During the course of the event, many incidents of censorship took place. Ibrahim Ahmed and Carlos Martiel – two artists who had their work censored and even destroyed – speak to C& about their experiences.

It all happened within a few minutes, Ibrahim Ahmed tells me about his experience at the 13th Havana Biennial. Moments after installing his piece, the Cairo-based artist was told to remove it immediately.

Entitled Does Anybody Leave Heaven the 11 x 4 m work consists of different fabrics from Cairo markets that were stitched together and make references to the US flag and the Great Seal of the United States. Assembled by local tailors, the work comments on the ubiquitousness of US American imagery and the different forms its soft power takes while masking complex machinations. 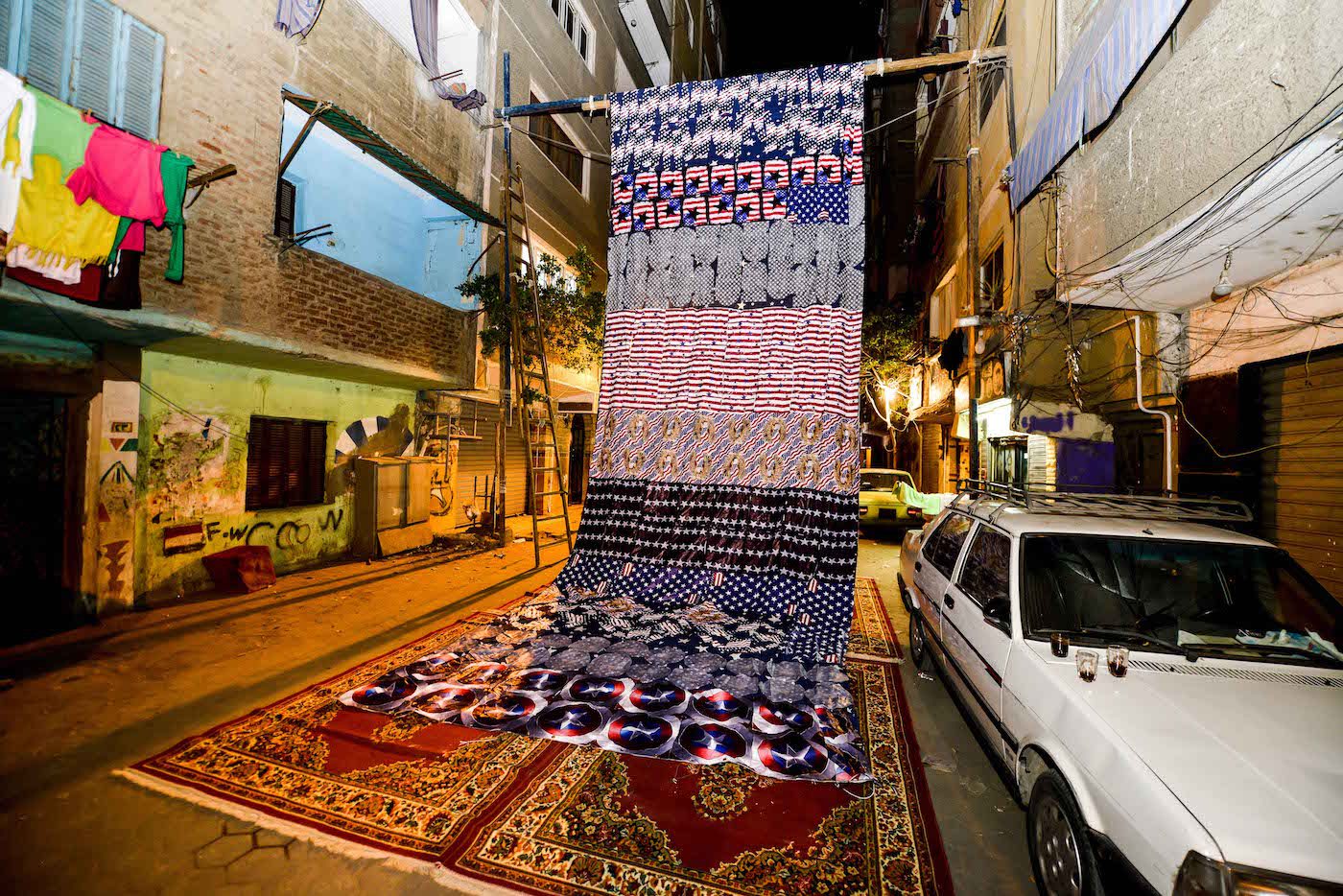 “Jose Fernandez looked at me shocked,” Ahmed says about the fist co-curator to look at the work. After the artist’s explanation, Fernandez left to return with Margarita Sanchez Prieto to express their disappointment that the work was not what they had previously discussed. “I felt let down,” says Ahmed who moved from the US to Egypt a few years ago. “Especially because the biennial’s statement talks about creating a new narrative for the Global South that empowers us.”

The curators justified the censorship by claiming the biennial could not be seen criticizing the US government – an oddity, given the mythology surrounding Castro and the decades-old anti-US sentiment in the national consciousness. They suggested turning the work around so that the US references were facing the ceiling.

“I refused to hide the front part of my work because I want it to evoke the influence of the US in the world,” he explains. “It further proves my point that US imperialism is a force and this activated the piece in a way I didn’t expect.” Because of the recent Decree 349 – a law issued in July 2018 that gives the Cuban government the power to decide which pieces of art are exhibited in the country and who is considered to be an artist – Ahmed thought the biennial would be the ideal context in which to show his work. “I was naive to think that,” Ahmed admits. “But Cuban censorship is only the tip of the iceberg regarding the extent of US interference in the world.”

When Ibrahim Ahmed tried to speak to Jorge Alfonso García, the issue was no longer on the table. The biennial’s director only assured him that he could get his work back. “I just pressured them to make sure I could take it back with me the same way that I had brought it in – in a duffle bag.” The irony of the incident is that the work itself probably wouldn’t make one US official bat an eye.

Living in Egypt, censorship is something Ahmed is familiar with and there were many parallels the artist could draw between the two countries. “I think biennials are a larger cultural reflection of the politics of a country,” the Egyptian artist says. “And I’m no longer interested in this diplomatic way of a country showing how progressive they are by inviting international artists for cultural capital.” Because of the speed of it all, Ahmed didn’t have the chance to speak to other artists and seek support. “I think we should create some sort of artists’ union, there needs to be power given to the artists to put institutions in check, otherwise we’re just part of the problem.”

Artists finding themselves alone in these situations is a common occurrence. Ibrahim Ahmed remains unsure as to how to proceed with other biennials. However, this episode will certainly change the work and how it will be presented in the future. “From the day I got shut down I documented more than 100 people wearing clothes sporting the US flag in one week only,” he hints at possible additions to the installation. The work is now back in Egypt with the artist and will soon be exhibited at the commissioning gallery New Art Exchange in Nottingham, UK. 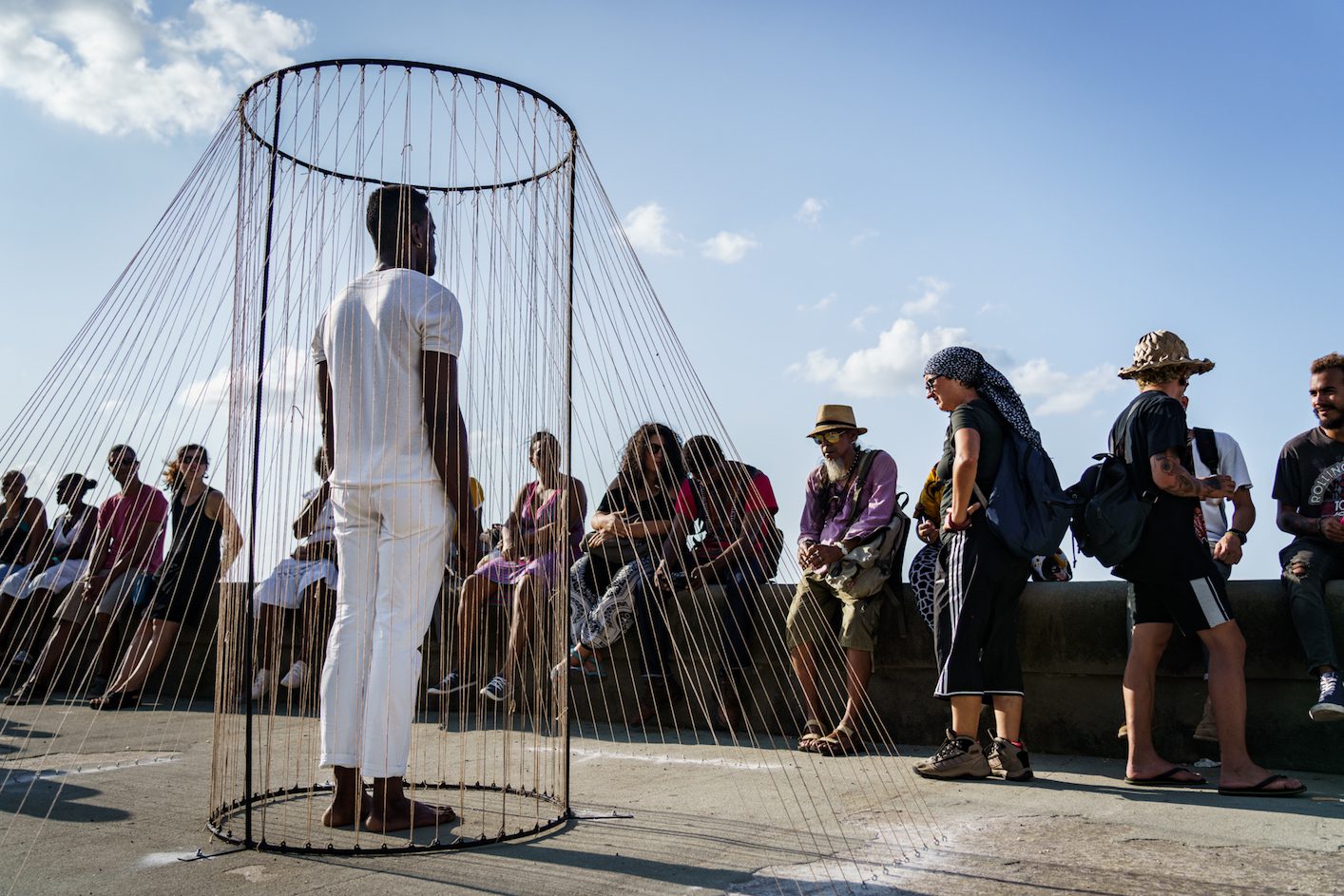 Carlos Martiel is another artist at the biennial whose work was censored. In his durational performance La sangre de Caín (Caín’s blood), the Cuban artist stands inside of a circular metal structure with threads dipped in the blood of artists (including his own) who are openly against the Decree 349. “In the initial project I told them I was planning to use the blood of people who are marginalized in Cuba,” Martiel tells me. “And they never asked me for any other details.”

Once the curators found out the full motivation behind the piece, they suspended all support to the artist who had to install the piece by himself for five hours in the sun. Martiel did manage to stage the performance but on the following day he was asked to meet the Vice Minister of Culture Fernando Rojas, and shortly after the installation and the label of his work were removed and destroyed.

During their meeting, the Vice Minister explained that during the performance people were heard shouting anti-Decree 349 slogans, something that did not actually occur. He then concluded that Martiel’s work did not make any sense because the decree was not in effect. However, law implementation aside, Cuban artist Luis Manuel Otero Alcántara was arrested multiple times in April in connection with his performance in which he and two other persons wore US flags as capes. Coco Fusco, who has written about the incident concerning Martiel, was denied entrance to the country for presumably criticizing the same law. 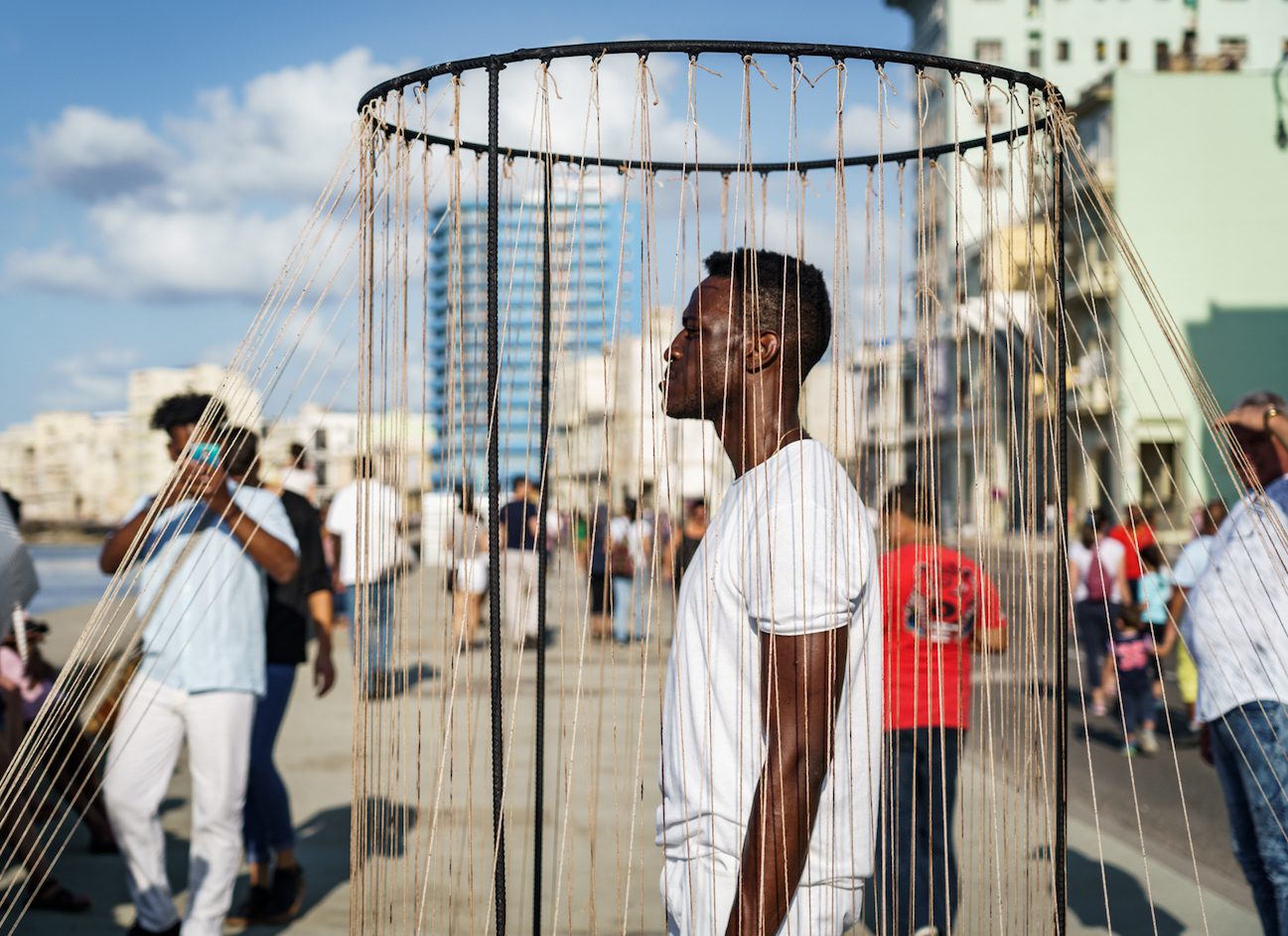 Despite positioning itself as a platform for justice and equality, the Havana Biennial is failing to keep its promise by exercising intimidation and censorship. Yet, these tactics can only harm the institution itself, as local and international artists and press refuse to ignore institutional abuse.

The Havana Biennial, The Construction of the Possible, continues until 12 May 2019 in Havana, Cuba.