The ABCs of Dalton Paula: From Africa to Bahia and, of Course, Cuba

Alexandre Araújo Bispo: How did you become interested in visual art and what is your training?
Dalton Paula: It started when I was a teenager, from reading manga such as Knights of the Zodiac. I collected copies of the magazine Herói and would copy the drawings using carbon paper and then color them in with colored pencils. Now I’m aware that it was this “coloring in” that brought me to the arts. I also had the opportunity to study in the School of Visual Art in Goiânia, which was right next to the city’s Contemporary Art Museum, and both institutions were really thriving at that time, with the mounting of exhibitions and visiting artists who shared their experiences with the students. At fourteen, I was able to meet and work with artists such as Arthur Bispo do Rosário, Farnese de Andrade, Coletivo Corpos Informáticos, and Marco Paulo Rolla. This was an important contribution to my own training, which was further refined in the Visual Arts course at the Universidade Federal de Goiás – UFG.

Dalton Paula, Comunhão, 2009. Oil on canvas and silver leaf. Courtesy of the artist

AAB: You recently came to São Paulo to do a residency at the studio of Rosana Paulino, an important artist for understanding the black presence in contemporary art. What was this experience like?
DP: Rosana Paulino, apart from being important in the field of contemporary Brazilian art, is committed to education, because she is always guiding and training new artists. I am one of those students, and her involvement was crucial to the refinement of my work. In 2007, I sent an email asking for help and for more information about her work, and Rosana responded immediately; she took me under her wing and has been tremendously supportive. The residency at her studio was an extension of this process, which was already happening indirectly, via conversations about the presentation of work (the portfolio), the materials used, and the coherence between an idea and its visual representation, in addition to suggested readings, writings by artists and other points of reference. Also, the need to develop the practice of drawing, as the artist’s notebook was a focal point for her. This facilitated repeated experimentation, photographing the results and archiving them in order to compare them with earlier creations, so this practice has helped me a lot, particularly in developing my drawing skills in addition to painting.

AAB: As with your biography, does your social experience appear in your work?
DP: My personal history and experiences as a black man pervade my work, sometimes in a direct way, as when I inhabit this character-body that situates itself in urban spaces, or in inhabiting a movement, as in the task from the 2011 video “O batedor de bolsa” (“Purse Beater”); but this is also addressed indirectly, as a kind of game, playing with the pre-established, making use of the art of the Mandinka people, approaching it, dodging it, being imposed.

AAB: The artist divino sobral in the article “Dalton Paula e a arte de amansar senhores” examines how you confront public spaces when situated in realistic situations. Can you explain how your interest in ritual is related to your work in “rota do fumo”?
DP: In presenting these performances there is a metaphor of the body as a means, as a vehicle, similar to the Afro-Brazilian sects in which divinities inhabit the bodies of their sons and daughters. This ritualistic dynamic informs my artistic work, and, implicitly even, spirituality governs the shaping of the characters, determining the power of that body. Thus, in order to reach other layers of meaning(s) that are silenced or inhabit the realm of the secret, the magical, and the enchanted, I explore the theme of ritual in this work. This approach allows me to show that it’s about a ritualistic plant, one with magic potential that is widely used in indigenous cultures and in an array of African sects. In general these uses and knowledge are developed in villages, in the terreiros and Quilombos, Afro-Brazilian public squares and settlements of resistance, and I’m very interested in this spatial aspect. This act of creating multiple forms of spatiality and specific types of knowledge is a political act, a defense strategy, a means of survival, one which is both constant and constantly changing. 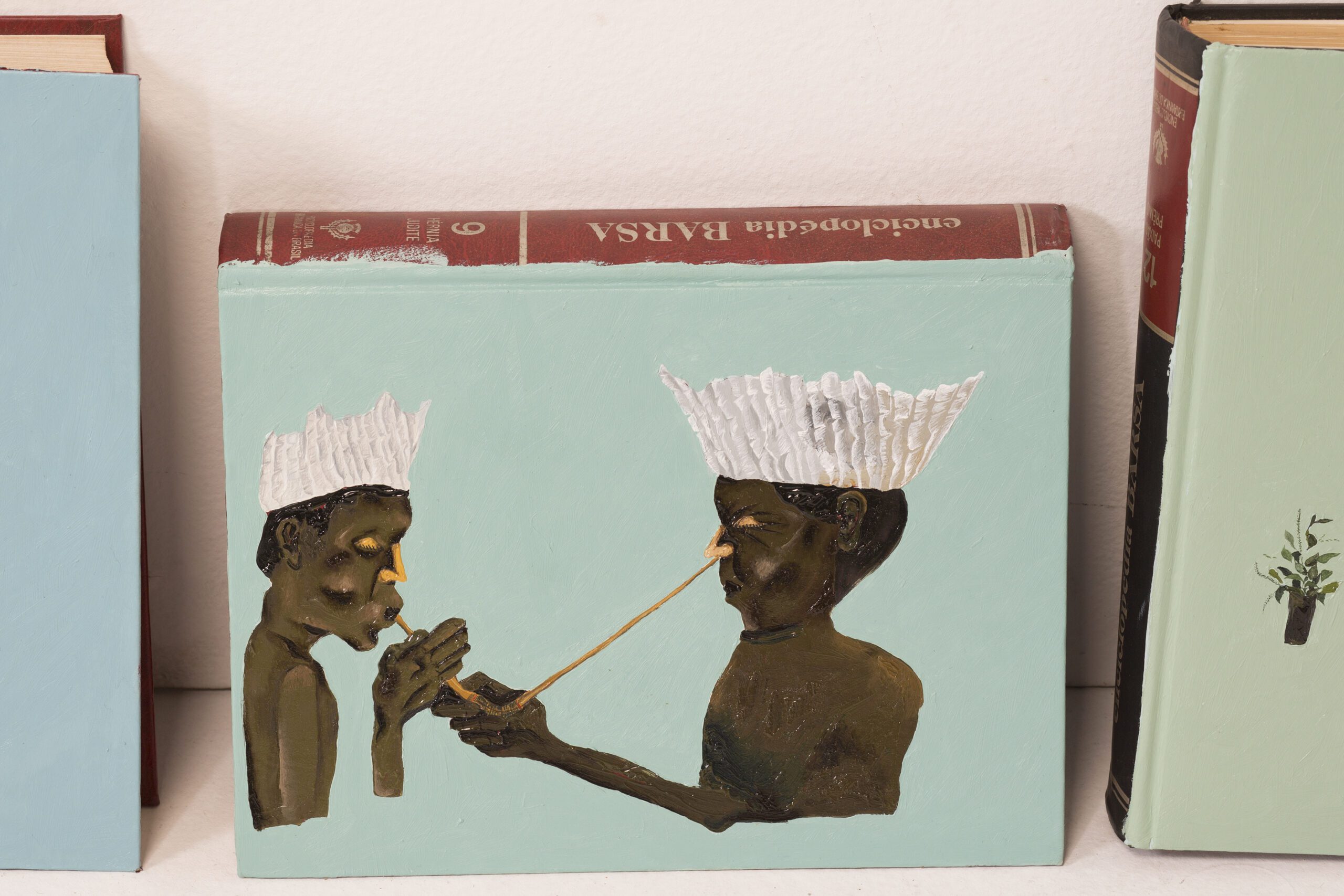 AAB: Can you tell us a bit more the role of your journey to cuba and bahia in conceiving “rota do fumo”?
DP: My interest in Cuba is as a place that received the African diaspora and in the Afro-Cuban social and cultural forms that developed there, as well as the similarities with regard to modes of production―for example, the cultivation of sugarcane or tobacco―in addition to its differences, such as the political regime. I’m interested in this place which produces the most famous cigars in the world and the various uses of tobacco, including in the religious realm of Santeria. Bahia has always caught my attention, especially because it has the largest black population outside the African continent, and also because of the tobacco farming and production of cigars there, which is historically relevant to the region’s economy. So I’m interested in thinking about how this black population served as manual labor enslaved in this system of production, but not only that, how it was and is able to be maintained, reworking its cultural and artistic practices, its religiosity under what are still extremely adverse conditions.

AAB: In “rota do fumo” you demonstrate profound interest in Brazil’s early history, examining the subaltern process of the black and indigenous populations, but you also manage to demonstrate an understanding of more complex forms of resistance, such as the use of plants. Can you tell as a bit more about these frequently necessary, everyday investigations into the sacred?
DP: I look back at the historical past in order to better understand how power relations and, especially, the process of enslavement, inscribe themselves on what we experience in the present, which allows me to catch glimpses of potential questions and future trends. This historical investigation, which also utilizes other points of reference, such as botany as well as Afro-Brazilian and indigenous religious practices, traffics in the official record but with a focus on the anonymous, the histories and narratives that are usually disregarded. In them, I find the sacred in its everyday dimension, understanding it as resistance because it’s inseparable from life, from nature, from the temporal space in which it’s located, it’s an element that coexists in the midst of oppression, hence its importance. It is through this sacredness, reworked every day, that black and indigenous populations are able to survive, to construct other forms of existence, to maintain their dignity.

.
Alexandre Araújo Bispo is an anthropologist, independent curator and art critic, and  member of the editorial advisory board of OMenelick 2° Ato.
.