With its eclectic approach the exhibition Tendances et Confrontations from 1966 provided snapshots of Africa’s various art scenes and of contemporary art in its formative phase.

In this series, C& is revisiting the most discussed, loved, hated, thought-provoking, and game-changing exhibitions featuring contemporary art from African perspectives in the past decades.  This time we take a closer look at the exhibition Tendances et Confrontations from 1966 curated by Iba N’Diaye.

In 2016, the 12th edition of Dak’art took over the former Palais de Justice in Senegal’s capital. Its façade was emblazoned with the words “La cité dans le jour bleu” (The City in the Blue Daylight). Apart from being the title of the exhibition, the phrase also heralded the transformation of this rundown, abandoned site, which was turned into a functional exhibition space that at times even upstaged the works on show there. It was not the first time this unorthodox building had featured in the history of contemporary art in the country. It was here that Hans Ulrich Obrist had decided to install his contribution to the biennial in 2004. And, most notably, in April 1966 the Palais de Justice had offered its premises to Tendances et Confrontations, the contemporary art exhibition included in the First World Festival of Black Arts. This exhibition, overseen by Senegalese artist Iba N’Diaye, was the first attempt to provide a panoramic view of Pan-African contemporary art – including all the fumbling, trial and error that was involved in the period that followed independence. 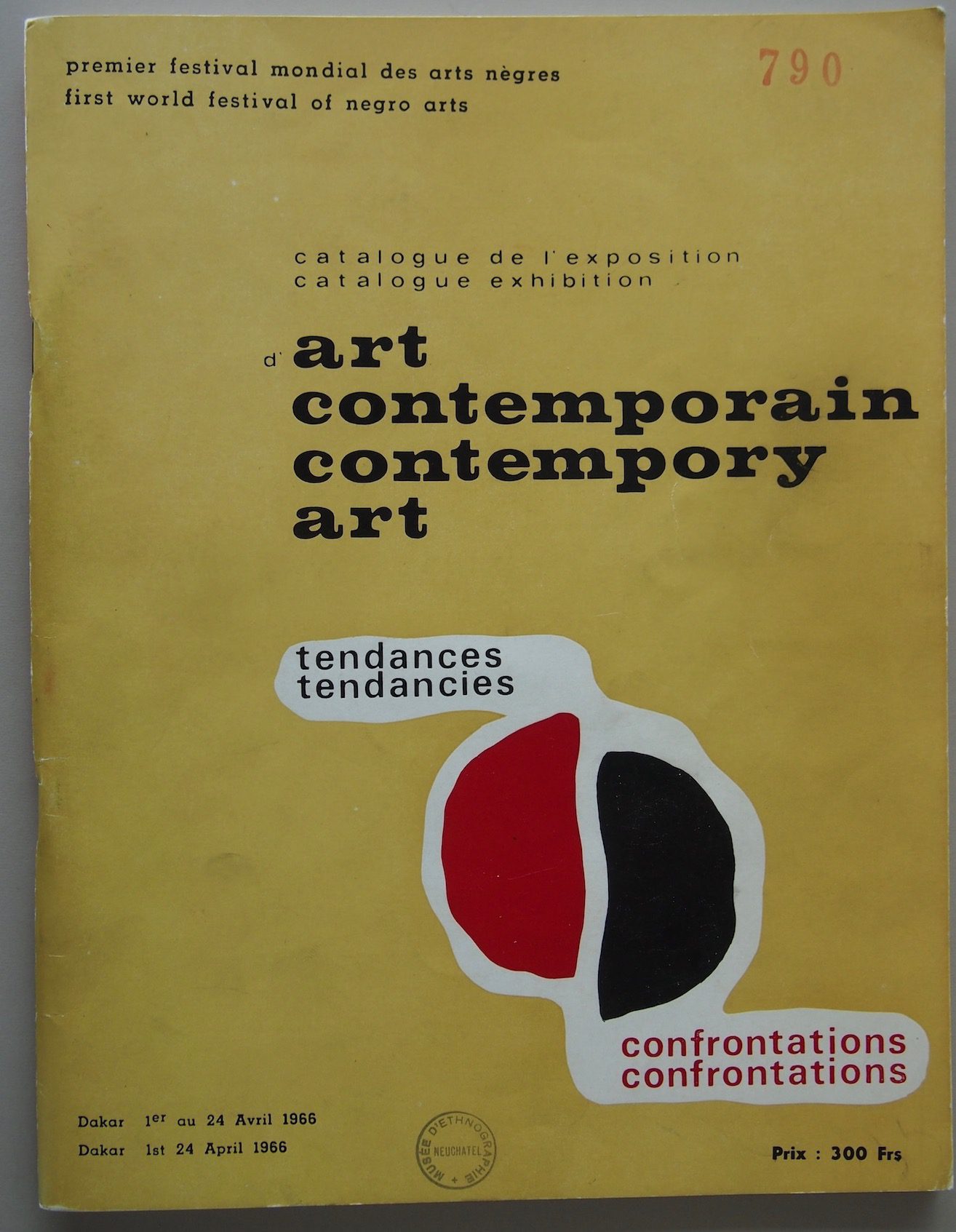 Cover of the catalogue

Yet very few records documenting this exhibition have survived. There are some photos in circulation, but the archives are incomplete. The catalogue is difficult to obtain, and if you do succeed in getting hold of it, the information it contains turns out to be rather unreliable. The media coverage of the festival didn’t help either, since it sidelined its importance. Despite all that, it is possible to get an idea of the exhibition as a whole and of its limitations.

Works by almost two hundred artists were presented from some twenty-five different countries: among them Congo-Brazzaville (now the Republic of Congo), Congo-Léopoldville (now the Democratic Republic of Congo), Côte d’Ivoire, Ethiopia, Madagascar, Morocco, Nigeria, and Senegal, as well as Brazil, the United States, France, Great Britain, and Haiti. The major figures in the art world of the time were present. The Ivorian sculptor Christian Lattier won the festival’s grand prize for visual arts. Nigerian artist Ben Enwonwu, who was closely associated with the Paris-based quarterly Présence Africaine, evidently did not show his work, but at the symposium he defended his vision of a form of art marked by nationalist vigor. Felix Idubor was also one of the sixteen Nigerian artists whose work was exhibited, among them the “young guard”: three key members of the old Zaria Art Society. Demas Nwoko, Uche Okeke and Bruce Onobrakpeya were championing a new approach to art called natural synthesis. The canvases of Sudanese artist Ibrahim el-Salahi hung next to those of Ethiopian painters Skunder Boghossian and Gebre Kristos—Kristos, the latter having been awarded the Haile Selassie Prize in 1965 for being “one of the main innovators of nonfigurative art” in Ethiopia.

The space allocated to the exhibition was somewhat awkward: the large hall and its open-air atrium had been equipped with partitioning made of movable panels that could be used to separate off the exhibition while allowing staff to circulate freely, and service activities to continue. The works were grouped by country, not aesthetics, choice of theme, or formal approach. While this categorization made it possible to make comparisons between different artistic scenes, it actually revealed an unexpected fluidity in the artists, inasmuch as their place of residence could take priority over their place of origin. Thus, Gerard Sekoto did not represent his native South Africa (which had anyway not been invited to the festival) but rather France. The presence of Martiniquan painters Mathieu-Jean Gensin and Louis Laouchez in the section devoted to Côte d’Ivoire was potentially more surprising, but it gave notice of the decisive role that West Indian artists would play on the Ivorian scene in the 1970s. 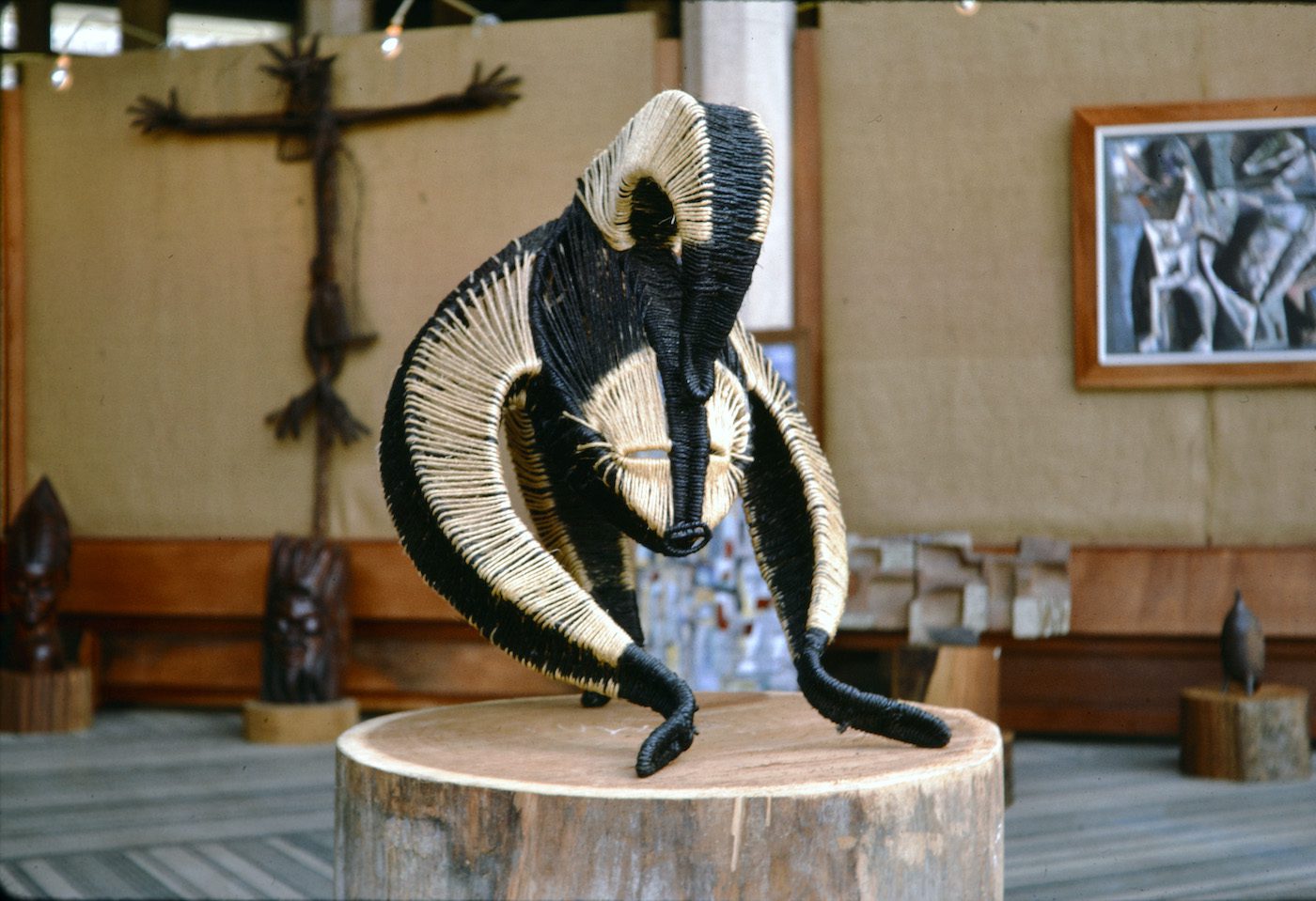 The exhibition’s reception was not without controversy. The festival was a boisterous multidisciplinary event, in the midst of which Tendances et Confrontations could not escape comparison with the display of masterpieces of ancient art at the Musée Dynamique. The few reviews it received described the exhibition as somewhat chaotic. Iba N’Diaye himself spoke with regret a few years later about how “heterogeneous” the works had been, as this had disrupted the appreciation of them. Gabon, for example, was represented by artisan sculptors working in wood. They had few points of contact with the ten painters from Senegal who included Walid Diallo, Ibou Diouf, Mor Faye, Papa Ibra Tall, and indeed Iba N’Diaye. Their tumultuous canvases had little affinity with the figurative works of an artist like Guy-Léon Fylla who represented Congo-Brazzaville and in whose stead one might have expected to find the artists of the Poto-Poto center for African art, whose founder, Pierre Lods, was at the time a professor at the Dakar School of Arts. But perhaps those artists had too many associations with the colonial period. When it first appeared in the archives, Tendances et Confrontations was termed a “salon” of contemporary art. Although it was subsequently changed to “exhibition,” preserving this term might have forestalled any misleading impressions relating to the lack of coherence in the selection of works.

An initial explanation for this perception of heterogeneity can be found in the particular conditions surrounding the selection process for the exhibition. In fact, each national delegation was responsible for making “its” choice of artists. And each demonstrated a markedly different understanding of works that qualified as “contemporary.” The broad disparities—ranging from auteur arts and crafts to abstract painting on canvas—are indicative of the awkwardness with which contemporary art as a category was venturing at the time into more or less structured art scenes. And this is what is so interesting about Tendances et Confrontations. Rather than seeking to present a prescriptive panorama of the continent’s art, it is an informative snapshot of various art scenes and of contemporary art in its formative phase.

Cédric Vincent is an anthropologist, professor of art theory at the School of Fine Arts in Toulon. He co-directs the PANAFEST project, from which was extracted the exhibition Dakar 66: Chronicles of a Pan-African festival (Musée du Quai Branly, Paris, 2016).