Where Politics and Arts marry...

The painter Steve Bandoma has built a career on addressing the politics of his native Democratic Republic of the Congo. Unable to separate politics from art, much of his work engages with the ongoing fight for identity on the continent, a struggle led by the major figures in African politics. But how should we read Bandoma’s work? Costa Tshinzam looks into the significance and nuance of this particular brand of “political art”.

During a visit to Lubumbashi, which was prompted by political motives, Congolese artist Steve Bandoma was given a free hand by the Centre d’art Waza. His artist talk there provided him with an opportunity to discuss his work through the course of his career in front of an audience consisting of artists of all disciplines, curators, and other cultural operators. He made no secret of his inability to separate art from politics. And he clearly demonstrated his desire to marry the two. How should his work be regarded then? As political aesthetics or aesthetic politics?

Bandoma represents a fusion of the different passions of his parents: a father with a career in politics – a former minister and diplomat – and a mother with a love of painting. Trained at the Academy of Fine Arts in Kinshasa, he continued to evolve, refining what he had learned in Cape Town, South Africa. Success was not slow in coming and the young man won several prizes. After returning to the Democratic Republic of the Congo (DRC), he founded Quoi de Neuf, a center of contemporary art in Kinshasa. If he uses his taste for beauty to hone his political ideology, the reverse – the act of nourishing his sense of aesthetics with themes drawn from politics – is also true.

In fact, his work – which is characterized by the appropriation of images and texts from various magazines, to which he offers a second lease of life – allows viewers to question and appreciate the political questions raised by this mix: It is a different experience from leafing through actual magazines. His painting Colonized (2012, mixed media on paper, 100 × 70 cm), for example, is an artistic vision of the upheavals that have occurred as a result of the distorted relationships established between Africa and the West, which made the continent the latter’s “property” in the 19th century. This view is illustrated by a nkisi nkondi, a statuette that, despite its ability to ward off malefactors and sorcerers, finds itself overwhelmed by Western powers, symbolized by European flags – these are received by hands of diverse colors, which impale and penetrate the figurine. 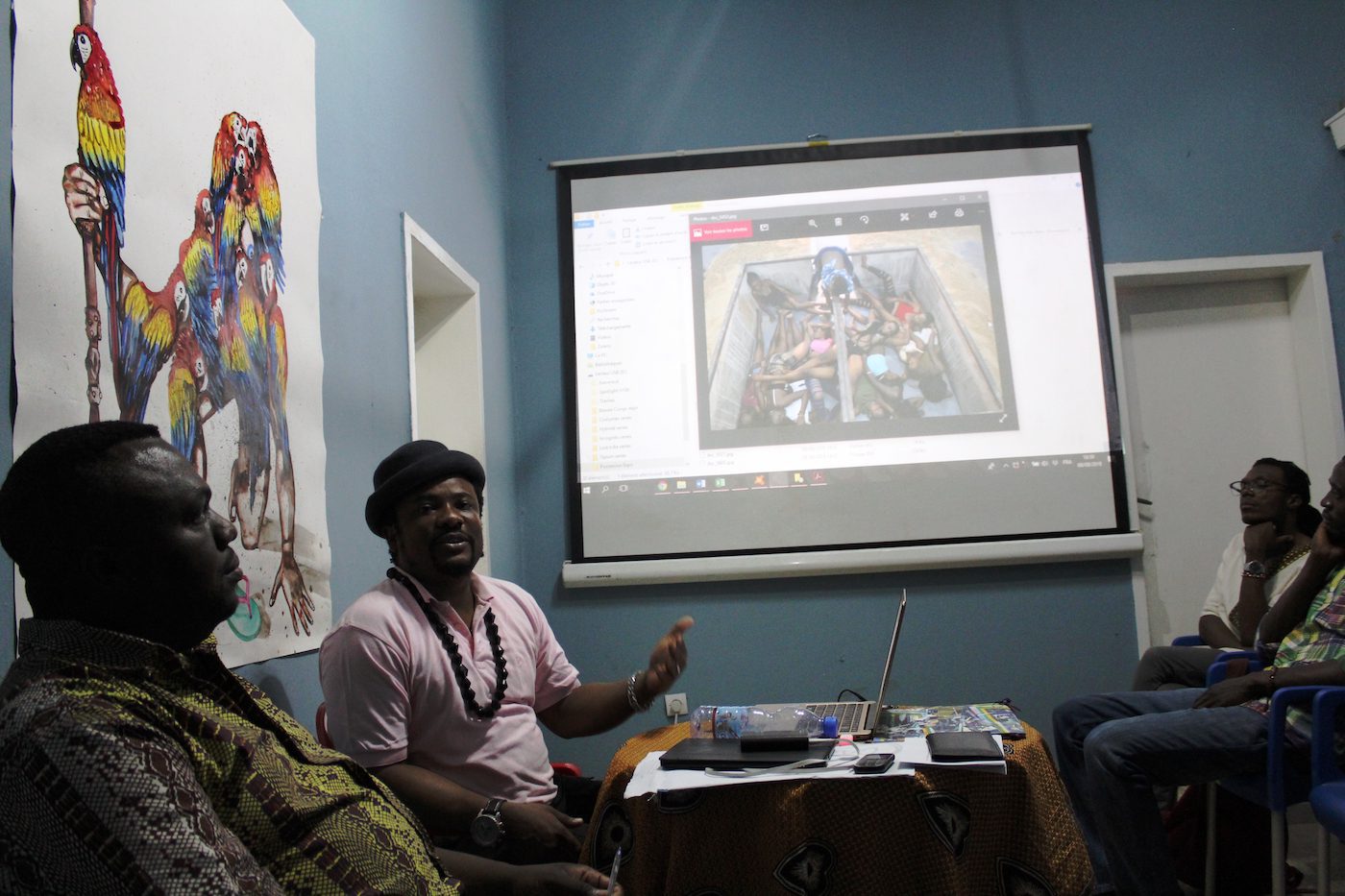 Multiple themes are explored in his work, but it is marked above all by a fight for identity, a struggle led by the major figures in African politics, such as Marshal Mobutu, who deposed Patrice Lumumba’s government in the DRC with the support of Western powers in 1960. Questions surrounding the input coming from the West are addressed in his series Lost Tribe, where a supposedly very kind Father Christmas can be seen carrying African statuettes. Statuettes from the same Africa whose people, in the eyes of former French president Nicolas Sarkozy, “have not yet fully entered into history.”

With his many contributions and the political stands he has taken on radio and TV stations around the world, Bandoma continues to be a multidimensional artist ready to join with others in a process of sustainable development powered by culture and the arts. Since 2006, he has made a sustained effort to participate in collective exhibitions both at home and abroad. This commitment has manifested in shows like Demain Kinshasa, which was part of the Franco-German cultural program Journées Utopiques, at the Institut Français in Kinshasa in 2016; Towards Intersection, at !Kauru African Contemporary Art in Pretoria, South Africa, in 2015; and Kongo across the Waters at New Orleans Museum of Art, USA, in the same year.

In view of his ideology and the subject matter explored in his work, it is evident that Bandoma uses politics and art as leverage to reveal or denounce the turmoil, troubles, pain, and frustrations that have come out of a clash of civilizations. For example, Mobutu 3 and Mobutu 7 (both 2015, mixed media on paper, 35 × 50 cm) each show the face of a marshal in a state of decomposition, with one eye missing from its socket, while the other is attacked by a fly – the only remnant of his pride is his traditional leopard-skin toque. Corps en souffrance (2015, mixed media on paper, 100 × 150 cm: Lost Tribe series) and Pirate (2015, mixed media on paper, 75 × 140 cm: Costume series) perfectly illustrate the denaturation of identities that may arise from a clash of originally different civilizations. While the first picture shows a Black body with a white head, its chest pierced with nails, the second is of a man dressed in Western-style clothes, holding a human-skull kebab.

Bandoma has applied to stand as an MP on the slate of one of the DRC’s opposition parties. Whether it has the politics of an aesthetician or the aesthetics of a politician, Bandoma’s work will remain a necessary hybrid of his parents’ passions to the extent that he is unable to dissociate art from politics. In its investigation of beauty, his work examines our lost identities.

Steve Bandoma is a painter from the Democratic Republic of Congo. He was born in 1981 in Kinshasa, he still lives there today. Bandoma uses various techniques-drawings, projections, collages and creates a true aesthetic implosion, with a reflection on chaos and suffering as its background.

Costa Tshinzam is a writer, blogger, and author who is a member of the Habari RDC community. He took part in the C& critical writing workshop in Lubumbashi, where he lives and works.

Translation from French by Simon Cowper.