There are startling, unambiguous parallels

Olufemi Terry, winner of the 2010 Caine Prize for for African writing takes a closer look at the revival of interest in masquerades and folk traditions celebrated in several coffee table books.

In the foreword to photographer’s Charles Freger’s Wildermann: The image of the savage, Irish novelist Robert Mcliam Wilson wonders why “we gave up religion for this?” This being “the depthless grand guignole of mass media idiocracy.” “Plugged in,” Wilson writes, “neurotically wi-fied and G3d as we are, we yearn to re-establish contact with the actual, the primal, the old.”

Evidence of a wide revival of interest in masquerades and folk traditions can be found in several recently published coffee table books aimed at the art and design scene: Wildermann; Axel Hoedt’s Once a year and Maske by Phyllis Galembo, a survey of masquerades that occur even today in Haiti and across sub-Saharan Africa.

Europe and Africa lie on more or less opposite sides of Wilson’s “this,” yet there are startling, unambiguous parallels between the images and motifs in Maske and in Wildermann respectively. This is unsurprising. Europe’s pre-Christian past is not dead, only deeply buried. 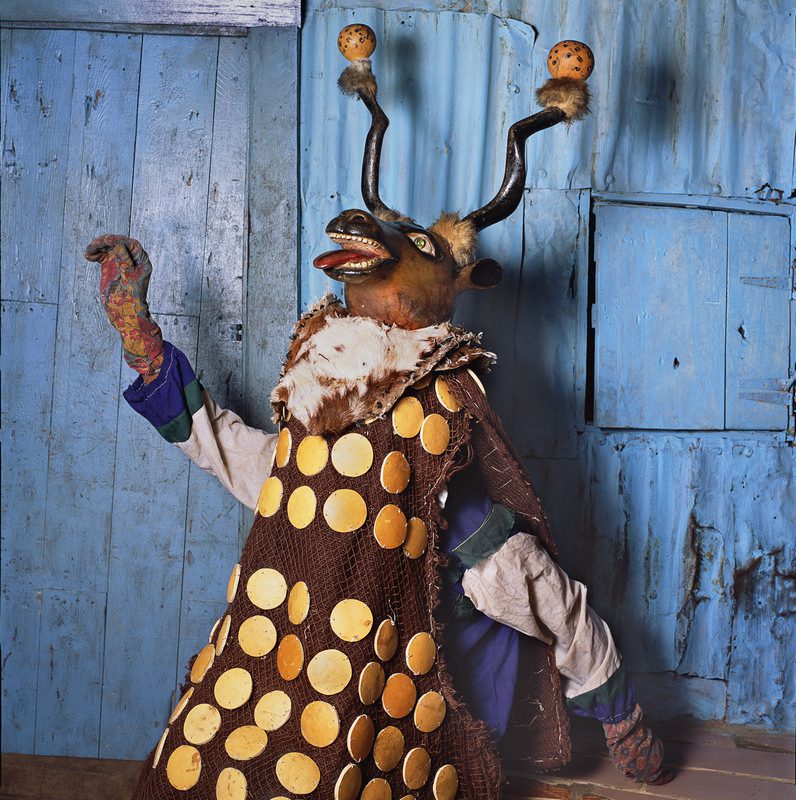 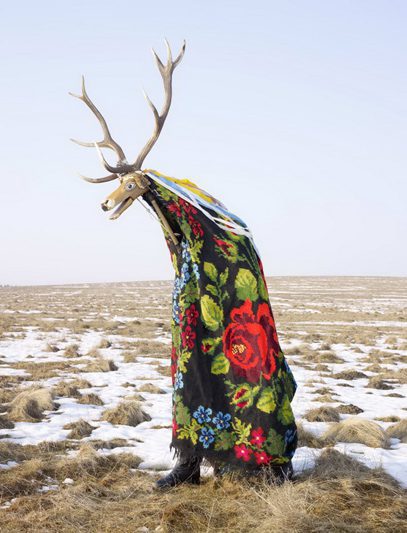 For the non-westerner it is tempting to satirize that continent’s efforts to reconnect with its pagan roots by training on Europeans the sort of exoticizing anthropological gaze so often directed toward African and Asian customs – it’s already been done: But it is also intriguing to note the subtle distinctions that set Europe’s revived masquerades apart from their African counterparts.

In Wildermann costumes I perceive what I’ll call a post-modern animism, an animism concerned equally with conservation as with depictions of the material and spiritual worlds. Many of Wildermann’s masqueraders appear, perhaps unconsciously – and in some sense after the fact – to be critiquing modernity and its attendant environmental degradation. The pastoral settings of the Wildermann portraits and the vivid animality of the costumes represent nature; but they also glorify it, setting it in unambiguous contrast to the contemporary world of industrialization, gadgets and convenience. But that opposition is framed in a visual vocabulary largely derived from monotheism’s stark dichotomies: good/evil, black/white, rich/poor, spiritual/material. 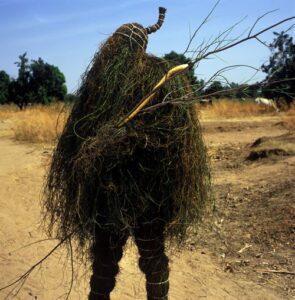 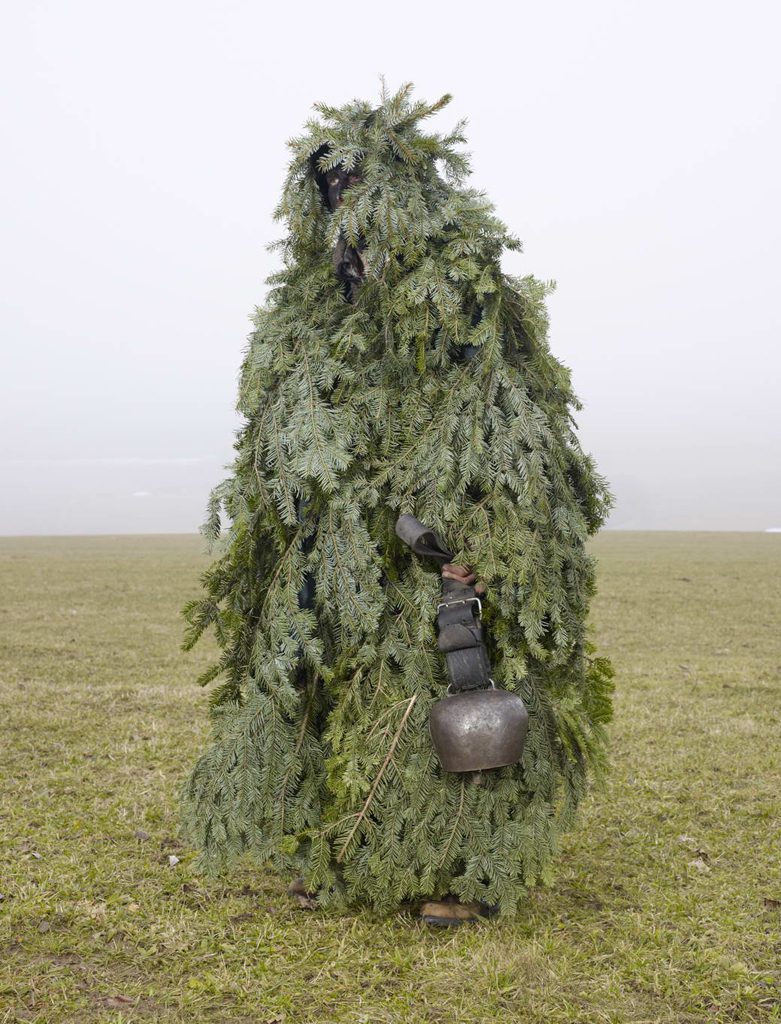 By contrast, in the African masks one perceives more disinterested and unitary representations. In the polytheistic beliefs of the Yoruba, or even that of the ancient Greeks, the Gods were capricious and demanded appeasement, and there were a great many spirits (mischievous, even malicious ones). Life was filled with mishap and unpredictability but there was neither God nor a Devil.

Of course, in one sense, African masquerades, like the Wildermann costumes, are ceremonies that signal engagement with and resistance to the pressures of conformity with the homogenizing influence of globalisation. But the African masks evoke an older milieu that has not lost all its power, and in this context, they stand in opposition to nothing; they merely depict and signify.

With its title denoting a lycanthrope – the offspring of a bear and a woman – Wildermann conjures the atavism and primitivism of a time when human spirituality was fluid and inchoate. But the Wildermann references also man’s duality, his brutishness, which has been an indispensable asset in building civilization.

Even as the outlines of fading cosmologies are evident in Freger’s portraits, the full complexity of European paganism appears elided and greatly simplified in his work, perhaps in the service of “marketing”. Freger alludes to the Goat, the Bear and the Devil in addition to the Wildermann himself. It is not difficult to guess the symbolism of each of these figures, or that they may have been chosen from among many historic archetypes for the reason of their transparent symbolism.

The goat represents the home, domestication and even advancement of a sort, for he is the companion that proves his usefulness by sacrificing meat, milk, wool. 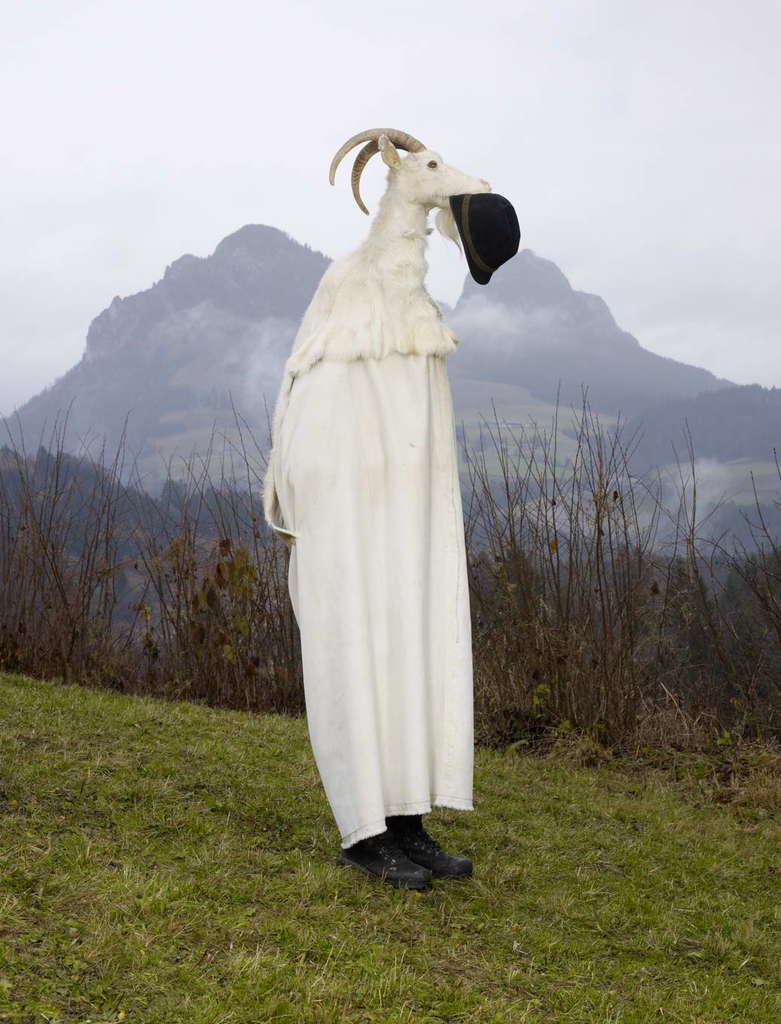 The bear stands for the wild beast that can be mastered or subdued but never absolutely tamed; the bear is of value, chained and dancing, as uneasy evidence of man’s power over the natural world, over dumb beasts. Yet the Bear is the ancestor too of the Wildermann and shares the same fraught (even Oedipal) relation with him that mythic Prometheus had with Zeus: the forebear eclipsed and then persecuted by his descendant. 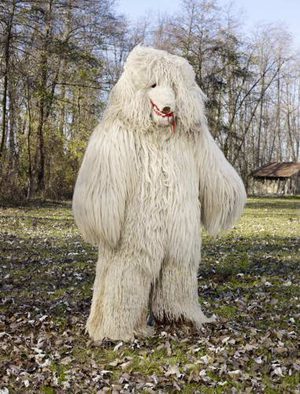 Alone of the four Wildermann archetypes, the devil approaches the ambiguity and fluidity of African masquerade spirits. He is described in Freger’s text as “the intercessor between the world of the living and the dead who, paradoxically, generates more laughter than fear.” Although the Christian Lucifer has been superimposed onto this primeval devil, traces of his original persona and attributes persist in the character of the medieval fool or jester. 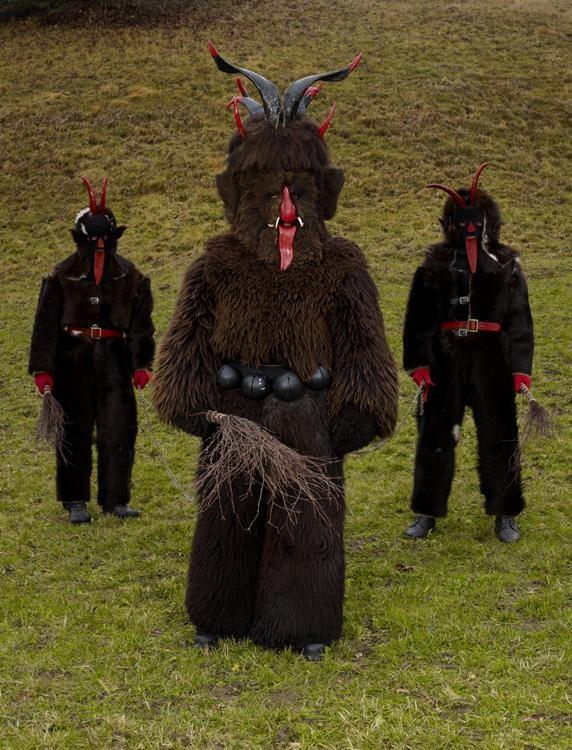 In the foreword to Maske, Chika Okeke-Agulu, wonders “why…does masking persist in such vibrant form in parts of Africa and its diaspora… despite the threats posed by the combined, if antithetical, forces of secularization, fundamentalist Christianity and radical Islam?”

In answer to that question he offers an arresting anecdote of village youths resolving a dispute not through the modern legal bureaucracy but by using masqueraders and masks “as agents of law enforcement and coercion.” The anecdote points to an important difference between African and European cultures. Monotheism is less deeply rooted in the former; the old beliefs, although facing erosion, persist in subtle and unanticipated ways. The evidence of this can be found in the ambiguity of personages and characters in many African and Caribbean masquerades.

Olufemi Terry’s essays and fiction have been published in the American Scholar, Guernica and Chimurenga. He has been writer in Residence at Georgetown and Cove Park. Terry’s short story ‘Stickfighting Days’ won the Caine Prize for African writing in 2010.