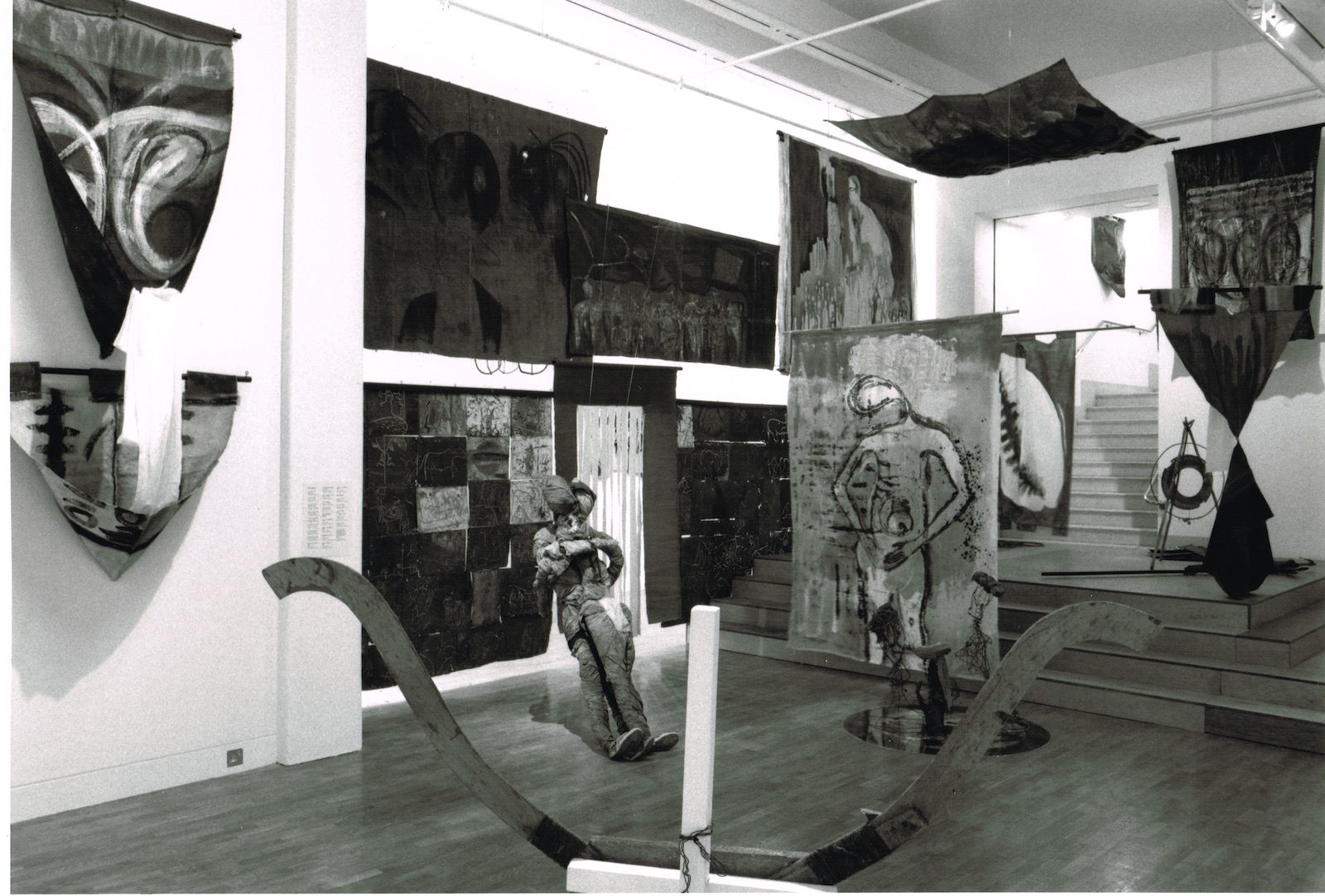 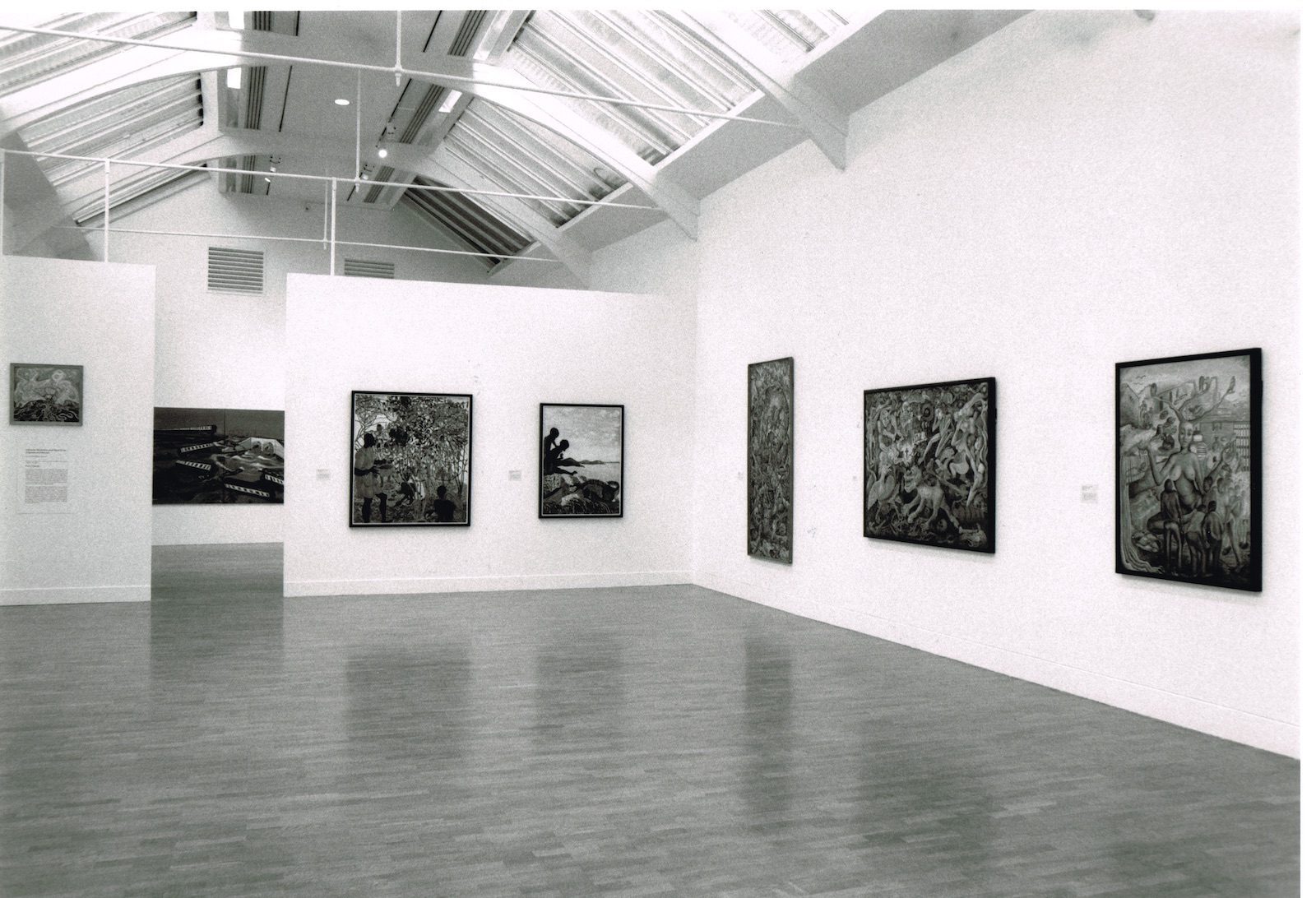 In this series, C& is revisiting the most discussed, loved, hated, thought-provoking, and game-changing exhibitions featuring contemporary art from African perspectives in the past decades. We take a closer look at the exhibition Seven Stories about Modern Art in Africa, which remains polarizing as a subject of curatorial and art-historical debates.

In 1995 everything revolved around Africa in more than 25 cities in the UK. As part of the festival africa95, major institutions such as the Tate Gallery in Liverpool or the Victoria and Albert Museum in London focused on the continent’s art and culture. One of the most influential exhibitions during this extravaganza was Seven Stories about Modern Art in Africa. In London’s Whitechapel Gallery, curator Clémentine Deliss and African co-curators went about telling not one but several stories about the contemporary artscape in Africa.

The initiators of africa95 worked on the festival’s program for a total of three years. Essentially important for the project development were intensive seminars and workshops with African artists who actively contributed to creating the musical, literary, visual arts, and performance events. This dialogue also formed the basis for the exhibition Seven Stories about Modern Art in Africa – the title being part of the concept. For Clémentine Deliss the motivation was not telling the curatorial narrative about “contemporary African art”. She was looking for plurality, not one complete story but fragments and personal perspectives: “The exhibition is not intended to be comprehensive or complete in its narratives, but invites the audience to experience a small part of the conceptual and aesthetic manifestations of the visual arts in Africa during the second half of the twentieth century.”[1]

In collaboration with five co-curators, Seven Stories was to tap into the historical development of contemporary art practice in Africa from several different viewpoints. Each of the curators devoted him- or herself to a specific region and defined its most significant artistic movements. The result was an exhibition with works by 61 artists from seven countries, which were grouped in five sub-stories: in the Nigerian section the artist and curator Chika Okeke Kurator focused on the influence of the Zaira Art Society and the Nsukka School on modern artistic production; Professor Salah Hassan presented spiritual works from Sudan and Ethiopia; while the artist, curator and activist El Hadji Sy presented the collective Laboratoire Agit’Art in form of a mixed media installation in the Senegalese section. David Koloane, artist and curator, presented works from South Africa which emerged during the apartheid regime and also addressed the country’s future. Wanjiku Nyachae, who works as an advisor and coach, curated the Kenyan and Ugandan section. She selected paintings dealing with social issues and political events such as Idi Amin’s brutal rule in Uganda.

When looking for collaborators, Deliss consciously also chose artists whose expertise and personal experience would provide an individual approach to the subject matter.[2] With this tactic she wanted to encourage a real dialogue about modern art production in Africa, which could only profit from the artists’ expert knowledge. She clearly distanced herself from exhibitions such as Magiciens de la Terre or Africa Explores and their contribution to perpetuating a virtually primitive “folk art” in non-European cultures. By contrast, Seven Stories was to provide a platform for academically trained artists, looking at their artistic production within the multi-layered context of background, exile, and Diaspora.[3]

Like other exhibitions before it, Seven Stories about Modern Art in Africa could not avoid being admonished. Many critics found the implementation of the curatorial concept to be too feeble and ambiguous: “Clémentine Deliss (…) could not decide whether what she wanted to tell was one story, her story, five stories or seven.”[4] Where was the curatorial profile, the supporting motif, the position on art historic and post-colonial issues that would distinguish this exhibitions from its predecessors?[5] With good reason Okwui Enwezor pointed out that despite focussing on academic art, the exhibition almost exclusively presented works by artists from the continent, while diasporic artists were left out.[6] But most of all the critics seriously questioned the selected curators’ expertise: for example they criticised Wanjiku Nyachae for allegedly falling for the perspective of European galleries in Nairobi, consequently presenting mainly appealing mainstream art in the Kenyan section; and the selection of works by Nigerian artists was rated as random and half-baked because of their great quantity. However, the fiercest debates arose around El Hadji Sy’s implementation of the curatorial concept because he seemed to prefer sounding praise to his own work instead of paying tribute to artistic contemporaries.[7].

In effect the curators’ shortcomings watered down the show’s actual intention. Certainly the different sections did not lack personal character – rather the common thread was missing. Deliss’s exhibition concept was simply too weak to hold together the diverse curatorial perspectives.

“What is it, for instance, to be an African? It is something I know nothing about; or, at least, it is a thousand things.”[8]

If you’re searching for the Africa, you will fail. With this straightforward insight Seven Stories about modern Art in Africa – despite some flaws – opened up a new chapter on exhibitions about the artistic discourse in Africa. Here finally there was no giving in to the temptation of describing the continent with hasty hypotheses and linear clichés. Instead, Deliss was concerned with the complexity, the sheer endless stories that can be told about contemporary art in Africa. Seven Stories demonstrated the need to allow for a coexistence of perspectives and approaches so as not to fall for a superficial and inevitably distorted history. In this respect the collaboration with curators from Africa clearly distinguished this exhibition from various forerunner exhibitions. They influenced the experimental process of the show, therefore promoting post-colonial themes such as the issue of representation. Furthermore, the selection of numerous academically trained artists rectified the stereotypical image of the traditional artist as was still predominant for instance in Magiciens de la Terre. As the first curator of a European exhibition focusing on African art, Clémentine Deliss passed on the respect, the authority, and the right to a say to the African curators and creatives: in Seven Stories about Modern Art in Africa artists and their work were no longer just objects being represented by a “Western” institution; they were now themselves designers and ambassadors of their own art history.[9]

Everlyn Nicodemus, 1995a: Art and Art from Africa. The Two Sides of the Gap