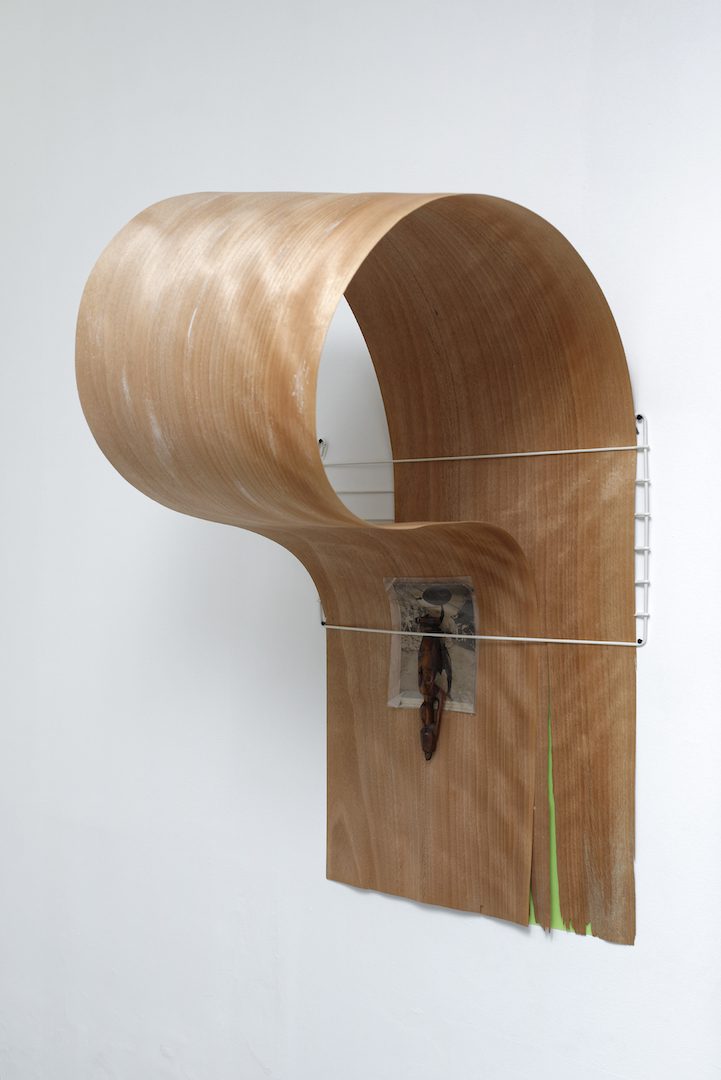 C&: We first met in Dakar. I remember our conversation when you told me it was your first time on the continent. I’d like to pick up that conversation three months later. How was your experience in Dakar? What was it like for you to participate in this pan-African context as a Martinican, a Frenchman…?

Julien Creuzet: I think it was an important and symbolic first, as a Caribbean, an Antillean, a Martinican – and as a Frenchman. This responds to a history and an imaginary evoked by being the offspring of a forced migration, that is, slavery. It’s something extremely powerful in that imaginary, to arrive on the African continent. I am French and I studied in France, and Martinique is also French. Although someone from the Caribbean person has a different imaginary from a Breton, either way the political and educational structure is essentially alike. To arrive in Senegal and in Dakar, to be at an event like an international biennale, means discovering an African and a Diaspora community. It’s also very strong in my imaginary because I had never done that before. By and large, the places I’ve exhibited are in Europe. So I found myself for the first time among a majority-Black community. That was a first for me, which I also found very powerful, and which gave me new perspectives unlike what I could take from an exhibition in Paris, in the French provinces, or in Italy. I met artists both from the African Diaspora and from the continent. It was a very interesting mix that united all sorts of ideas in relation to very diverse art. That makes possible a very powerful intellectual encounter and exchange. Sharing ideas is another great strength of the time at a biennale. So it made a huge mark on me.

“I thought that creole
was to be. All.
To be here and in Cuba, there.
To skip, be a pebble, smooth,
Rinsed by the sweet sea.
I thought I was a branch,
immortal windy rhythm.
I dance, I am that branch pebble
on the sea’s mirrored face.
I haven’t cited love and the sea,
which has at times that oily face
left by old sailing vessels
on the harbor floor.”

C&: You’ve spent some time living in Martinique. What is your view of the connection with the African continent?

JC: The connection is obvious: we are offspring of the African Diaspora. A Caribbean is tied to Africa by history, plain and simple. A Caribbean’s history began at the moment his ancestors were put on a ship that left the African coast. Africa becomes a hidden part of a Caribbean’s imaginary. It’s there, underneath. You go out and present in cultural forms like dance, music, creole languages, and you feel it in the Négritude poetry of Aimé Césaire, which is a sympathetic echo of Senghor’s.  The Négritude movement also became a Black affirmation, both African and Caribbean.

“Because I must move forward
and in my steps, my sodden pages,

breathe the wind in my ceaseless sails,

believing there is no final goal, step by step,

I bend, slip from motion to motion.

A star, a jellyfish.”

C&: When you talk about Négritude and Aimé Césaire, I immediately think of the video piece you presented in Dakar, which you called a landscape portrait. I saw that you had a talk at Raw Material called “Portrait Paysage” (Landscape Portrait). I thought that name was interesting. What do you mean by it exactly?

JC: Actually, that title was chosen by Seloua Boulbina. I think it’s a very good title. Essentially, the idea is to make use of the landscape as the most objective vision or path for talking about a Martinique right after Aimé Césaire’s death. The dictionary might tell you what Martinique is, where it’s located, but if you want to know what Martinique truly is, it’s smartest to go see it, look at it. The idea of a camera filming the landscape was a way of searching for an objective approach that doesn’t get involved, that shows what there is to see over the course of traveling ninety minutes across the island’s interior. It shows its infrastructure, roads, the architecture, the habitat, the banana groves, all the little details that you see, the people on the roadside, the junctions, the traffic circles… For me, the country also has a spiritual, symbolic dimension, which is to say that Aimé Césaire is the landscape of Martinique.

“It’s late, the sky is heavy and saturated like the night before a cyclone. I am swept up in a nocturnal ballad, strolling on the savanna down that new pedestrian road. Slow footsteps spaced by the friction of my flip-flops on the concrete ground. Timid, I walk ahead to the end. Farther on, a ghost under the lampposts reflects the white light. Past a row of palm trees, I spy Josephine standing straight. The statue of salt, of bright marble, unobtrusive with no head.”

C&: I read this sentence on your website: “l’opéra-archipel, c’est moi/the archipelago opera is me.” Is there a connection to poet and philosopher Edouard Glissant in that? What exactly do you mean by that sentence, that designation?

JC: The archipelago opera was a period of my work that lasted about a year and a half but still has an impact today. Above all, it was a residency in the banlieue of Paris, where I took an interest in the question of contemporary exoticism, which is also linked to the history of French colonialism and has a presence in the Parisian banlieue. The archipelago opera made reference to Les Indes galantes  (The Amorous Indies) by Jean-Philippe Rameau. That opera was a ballet with a hackneyed idea of the Indies. In reality, none of the opera takes place in the Indies because Jean-Philippe Rameau was ignorant of them and had never been there. Instead, it drew on the literature of the time – travel accounts – and geographically, Les Indes galantes takes place in Turkey, Peru, North America. It’s interesting to focus on a region of the world, but to evoke it in an imaginary while remaining completely ignorant of it. I was also interested in a series of colonial pamphlets published in 1931 and titled Toutes nos colonies (All Our Colonies), referring to the French possessions at the time, released for the Paris Colonial Exhibition that was held that year. Once again, there were some quite strong biases in the writing because some of the authors writing about the French Antilles had never been to there and were copying travel accounts. That’s also the same dominant colonial vision, and all the references allowed me to make transitions and to slip into a more contemporary world of 2015, when I made use of what I could glimpse as a gateway, an elsewhere, an imaginary in my present day, in what I see of everyday life. That allowed me to create multiple forms, to move from drawing to video to sculpture to poetry, all under the title Opéra archipel c’est moi (The Archipelago Opera Is Me) as a way of saying that I was, in a way, the epicenter of the whole production. (“Opéra-archipel, c’est moi” refers to the title of a text by Émilie Renard.)

“In the jungle of glass,
it was ten degrees
One would need to be hot to blow bubbles,
to spit smoke.

In the greenhouse of babble
I seek the large tree,
the baobab where tales are told, the shade of coal.

I wanted to wash them,
the pictures on the boulder of the river, half-naked with legs apart, glimpsed in the grove, among the ferns.

I rubbed them together,
hands clasped around Marseilles soap
so as to cover them in a thick coat.”

C&: Is that an ongoing project?

JC: The project concluded when I finished my residency at the gallery of the Noisy-le-Sec town art center. The sequence of my work has shifted. It was in another geography and I needed to maintain my freedom, including with respect to my chosen subject matter, and no longer be caught in the prism of the archipelago opera. Today, the project occasionally reappears when, for example, I was invited to an exhibition last August and asked to repeat a performance that had taken place during the archipelago project. It was called Danse païenne et corps critique (Pagan Dance and Critical Body) and was done with a group of women dancers – Afro-Caribbeans, feminists, activists, sociologists – called Fannie Sosa. One of the dancers performing was named Ana Pi. With those women, we were able to approach the question of the body, of the pelvis, etc., of all the movements labeled “ghetto,” and to think about a form of collective performance. I produced a new video featuring a pelvic movement, a poetry that attempts to tell those gestures’ story.

“I made the rounds of three traveling trees.
When it is too cold for my fingers,
I bend fully down, place my branches in the gray edge.
Banana tree scarred by the continental soil.
Obstructed oval of cassava, rolled in leaves.

Under the snow, I saw an elephant
and a giraffe,
but I only saw their long legs,
memory on canvas, gathers the flow of dust.

There were a thousand grains, a thousand people,
crumbled hair from hidden heads, bissap rosebuds.

Braids displaced that tried to grab their alocasia roots
in the chalky soil.”

JC: Because icons like Rihanna and Nicki Minaj, among others, are drawing attention back to “twerking” movements. It was about saying that there have been cultures that were interested in these movements and could see their other aspects besides vulgarity. They could find elements of well-being as well as a philosophical and spiritual dimension. So the idea was to reflect, together with this group of women, on these movements arising from African and Caribbean dances that might have been born out of ancestral rituals.

“I wanted to dance like here, to move my pelvis in circles. I wanted to shake my hands, to play with shadows, with this world’s opacity. I wanted to make graceful gestures, breaking waves. My bad painting…”

C&: My final question has to do with this year’s Kampala Art Biennale. You are participating as an artist in residence. How has your experience been there?

“A word from here, from the continent, as they say,

from the sky veiled with effluvia, exhaust.

I fly attached to a feline,

with no helmet, my belly against the back

A word, an image of foliage:

my sky is black

my reflection is a shadow

love tears me up,

I bend under improbable

thanks to the fluids

the animal in me.

All your life, I’ve seen it

drop, doubt, in the sputum

of the dirty sky.

all of a sudden the startling song

of a natural wind in the branches,

of sun on the branch,

it is there before me,

it is there every day,

it is there upon me,

sly, there on the tree

in my love of petals.

I walked in the woods

in the forest called

the woods that frighten you,

the incest of your fears,

the mosquitoes that bite you,

the shadows that unfold,

our words yet unsaid.

I must tell you,