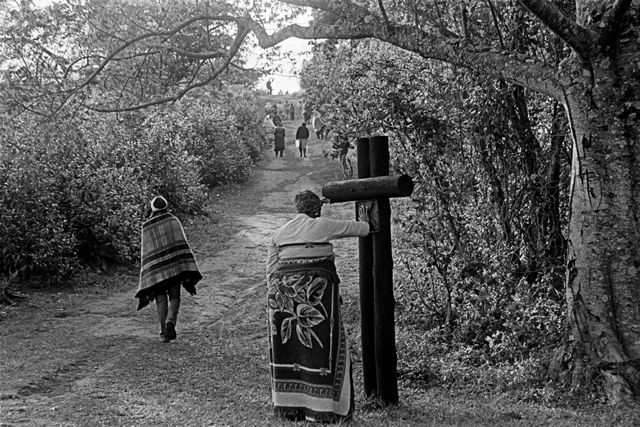 In conversation with Andrew Tshabangu

“My occupation, as a photographer, is a lonely one but places humanity at its centre.”

C& is media partner of the show “The Divine Comedy: Heaven, Hell, Purgatory revisited by Contemporary African Artists”. Exclusively will C& talk to the participating artists.

Andrew Tschabangu: It was not necessarily relevant because the work that I am submitting for this exhibition spans a period of over fifteen years and its focal point is religious practices in South Africa and Réunion Island. Before I was approached to participate in this exhibition, I did not know who Dante was or any of his works. Upon invitation I began to research Dante and I particularly like his poetry, especially the “Divine Comedy”.
MMK/C&: In its merging of Christian beliefs and moral values as well as classical pagan topics, the “Divine Comedy” represents a deeply-rooted Eurocentric concept of society, values and culture. The exhibition aims at dismantling the European prerogative of interpretation and looking at it from a new angle. To what extent do you think this approach can lead to the Eurocentric interpretational sovereignty being generally put into question?

AT: As a photographer, I am first a social being and it is my being that determines my consciousness. What I mean is that my being determines my self-awareness and awareness of my environment. It is my relationship with other human beings that informs my work.
I produce photographs that hopefully will resonate with the viewer so that the work becomes a continual source of inspiration, enjoyment and education. In other words, I would like my work to provide an experience that deepens, intensifies and extends the viewer’s satisfactions so that he or she may be enlarged by it and derive new meaning from it.
The best way to illustrate this point is by sketching my process for making images. The process of my photographic endeavour is propelled by the fact that reality is riddled with conflicting elements that co-exist and create a reality that is chaotic and therefore disorderly. Photography enables me to impose an order on the disorder around me.  I think through all the conflicting elements and come up with a core idea that best expresses a unified concept without falsifying the differences.  I reject certain features of the environment but also accept others so that I can capture and present my main idea.
I strongly believe that my work is best interpreted within the context of what makes me do what I do. My role in society, as a photographer, is not to present to society what it already knows; rather, I see it as that of a sensitive antenna through which society becomes aware of itself, its yearnings, dreams, abortions and miscarriages, its past, present and what it would like to be in the future. My occupation, as a photographer, like that of a writer, is a lonely one but places humanity at its centre.
MMK/C&: In European-North-American art history, the “Divine Comedy” has been interpreted by numerous artists (such as Botticelli, Delacroix, Blake, Rodin, Dalí or Robert Rauschenberg) – what role did this play for you in respect to your engagement with the topic?

AT: Dante’s “Divine Comedy” did not play any role whatsoever in my engagement with the topic. However, I found it very interesting to realise, when I was asked to submit work for this exhibition, that some of the concepts that I have been dealing with in my work over time have parallels with Dante’s ideas on hell/purgatory/heaven.

Andrew Tshabangu, Faithfuls at the station of the cross, Ngome natal, 2005, 40 x 50 cm. Courtesy of the artist and Gallery MOMO, Johannesburg

AT: Over many years, I have been working on the theme of religious practices in South Africa and Réunion Island. It is important to me to respect the people I photograph even if I do not necessarily share their point of view. It is crucial that I get permission from the people that I make images of before photographing them during a religious ceremony.
MMK/C&: The over 50 art pieces in the exhibition are assigned to the areas heaven, hell and purgatory. What realm of the afterlife does your work belong in? How did this allocation come about?
AT: My work belongs in the purgatory category.  It lends itself to this realm of the afterlife because in the course of making the images, I was struck by the reality that in their practice of religious ritual and ceremony, people reflect a communal and individual quest for renewal from the banality and pain of everyday life. It is, as it were, a way to wash off everyday dust. It is through religious practices that we realise the significance that Africans attach to humanity. Religion for the African is based on the reality that humanity is at the centre of all existence and any conflict between people leaves a community and the individual out of kilter with the universe. This, for the African, is purgatory; a state that can be transcended through atonement.

AT: It is about religious practices in South Africa and Réunion Island.