Artist, activist, and curator Lubaina Himid is known for using her practice to address issues such as the African diaspora, the legacy of slavery, and the visibility of black artists.

Artist, activist, and curator Lubaina Himid, known for using her practice to address issues such as the African diaspora, the legacy of slavery, and the visibility of black artists, has been named the winner of the prestigious Turner Prize.

In a statement issued by the prize, the jury “praised the artist for her uncompromising tackling of issues including colonial history and how racism persists today” along with her “expansive and exuberant approach to painting, which combines satire and a sense of theater.”

Zanzibar-born artist Lubaina Himid is the first black woman to win the prize, as well as the oldest-ever winner, at 63. The Preston, England-based artist was awarded the 25,000-pound ($34,000) prize at a ceremony in the English city of Hull.

Her works include ” Naming the Money ,” an installation of 100 brightly colored life-size figures representing slaves at 18th-century European royal courts, each given their own identity, story and skill. 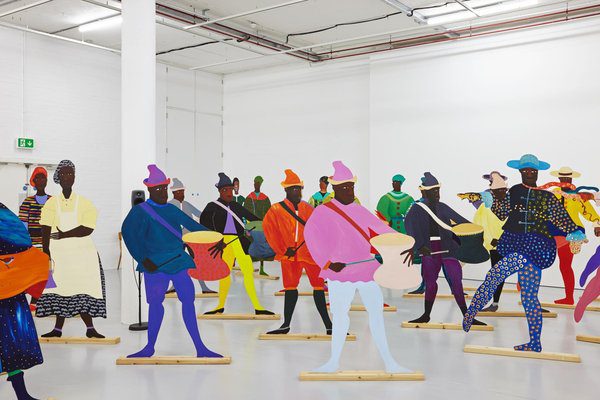 Founded in 1984, the Turner Prize goes to a U.K.-based artist and often sparks debate about the value of modern art. Previous winners include potter Grayson Perry and “12 Years a Slave” director Steve McQueen.

This year organizers removed an upper age limit of 50 for nominees.

Works by all four finalists are on display at the Ferens Art Gallery in Hull until Jan. 7.