In Conversation with Grada Kilomba

Living in a Space of Timelessness

C& talks with Grada Kilomba about her transdisciplinary work, the presence of the past, and how to perform knowledge for the sake of forcing transformation

Contemporary And: From staged readings to performances and video installations, your work is truly transdisciplinary. How do those different approaches come together?

Grada Kilomba: I am very interested in producing hybrid spaces where different formats and different languages coincide. I find this to be one of the most urgent tasks of this postcolonial era. If we look back, the classic disciplines always ask us to be disembodied artists, disembodied authors and theorists. We are expected to create a distance to an object that we study, describe, and stage. And we are asked to distance ourselves, our biographies and our bodies, from the questions this object might raise – and this is exactly the core of colonial knowledge production. There is a violent marginalization of certain bodies and simultaneously this fantasy of being objective, neutral, and universal. But what happens when you have historically been this object? What happens when you become the speaking subject? In which languages and formats should you speak your reality?

I believe we need to be experimental with these questions. Maybe that is why I often use different formats from project to project: because I think I have a different question for each format and each project takes me to a different dimension. It is an experimental process in which I want to position myself – my biography, my body, my emotions, my memories and history – as part of the work. This is what decolonial knowledge means to me.

C&: Considering that perspective, the absence of yourself or a physical body in The Desire Project (2016) is quite interesting.

GK: There is indeed an absence of physical bodies. I wanted to subvert the artistic practices and find a language that emphasizes the desire of this project: “coming to voice.” That’s why I wanted to work with video but not use any imagery besides the text itself. I think the visualization of text announces its urgency; the audience is invited to look at the text, read it, and see it. It becomes prominent. And because the installation I created has three channels, you feel surrounded by stories.

At the same time, I wanted to have music as the only sound. Instead of having the usual voiceover, I wanted to work with drumming as a form of narrative and remember the African tradition of storytelling, which involves so many different layers of knowledge production, including music. I worked on this with Moses Leo for several weeks until he composed the final music for the entire text, then I changed the text as many times as possible and edited the video countless times until the music and text became one, like a breathing body.

It was very important to me to have music, to remember the many physical spaces Black people cannot enter, to come to voice. But music enters those spaces. That’s why music has been used so centrally by many communities and people in the Diaspora. Music is something you cannot filter; it crosses time and space. You can exclude a person from a physical space, but you will hear the music this person plays outside. People in the African Diaspora have occupied many spaces through music. I see music as a form of political resistance, and I wanted to include it as such. In my work, music is like the direct translation of what you see.

C&: What do you mean by “performing knowledge”?

GK: I first came to this title, Performing Knowledge, when I developed a series of seminars to my students in 2010–15, and later this concept became the title of a book that I am now finishing. During my work in academia, I often felt incomplete. In academia, we produce knowledge by producing answers. And in the arts, we produce knowledge by producing questions. I am mostly interested in raising questions. I find this to be a strong force for transformation. So I became very passionate about this idea of bringing text into performance, of giving voice, body, and movement to knowledge – and of placing it in a more futuristic context.

I often feel that we are interrupted by the past, and that many spaces show a serious inadequacy to arrive in the present and to acknowledge the postcolonial condition. It seems we produce futuristic works in a present-day frame that actually belongs to the past. It seems we are always trapped in those three dimensions of time. In my installation The Desire Project, which I first presented at last year’s São Paulo Biennale,  I recreate this sense of timelessness: you have to pass a shrine installation, worshiping Escrava Anastácia, before you enter the digital space of the videos. To understand what is inside the digital videos, you must understand the outside, the shrine installation. You cannot get into the video installation without acknowledging this story of the past. 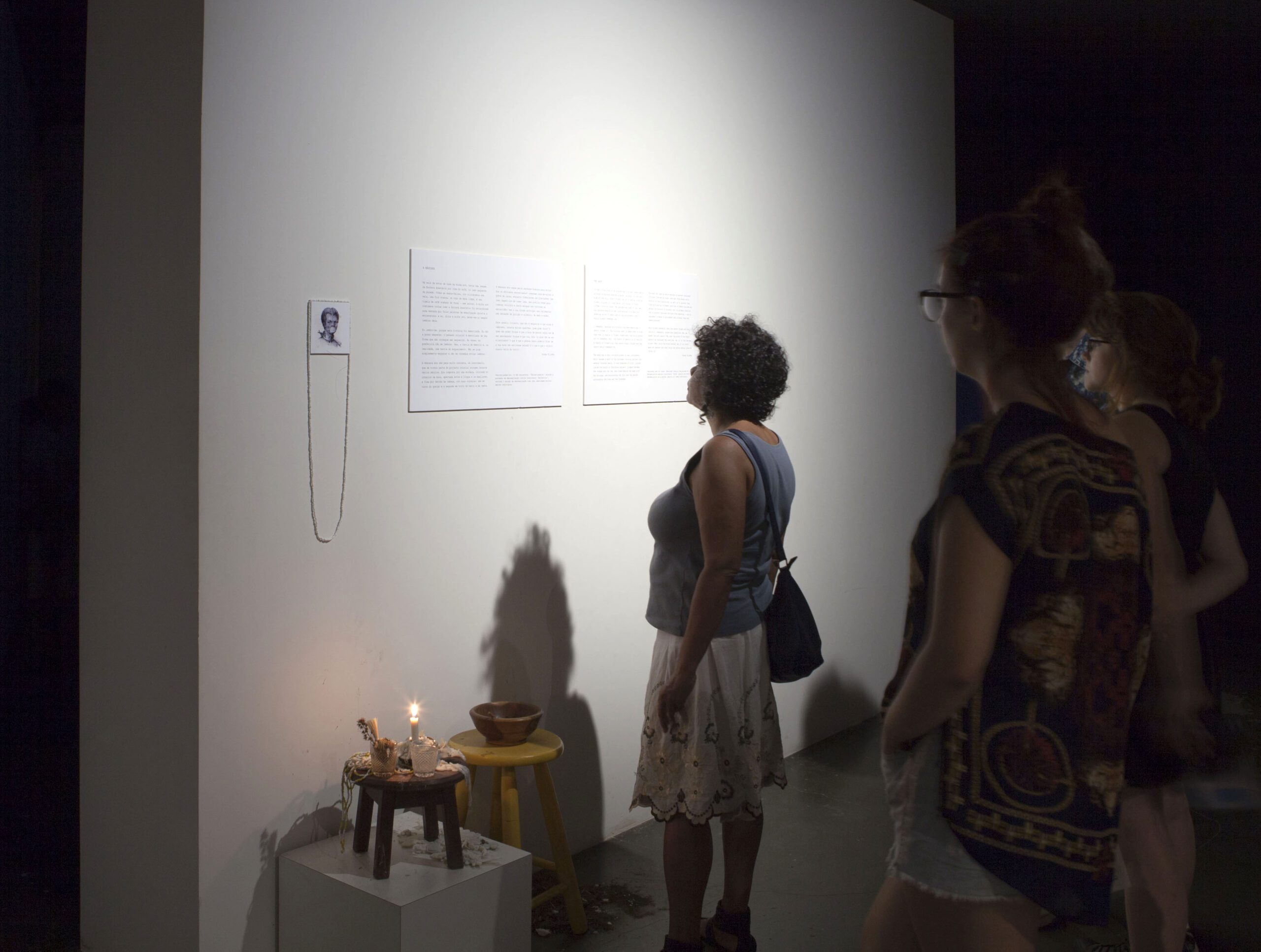 It is the story of an enslaved woman who was forced to have her mouth sealed, whose image was present in my childhood. I play here with this sense of remembering and forgetting. And with the fact that the theory of memory is actually a theory of forgetting. We remember because we cannot forget. And this is the constant relation between the past, present, and future. As a Black female artist, I often feel like living in a space of timelessness.

C&: In your new project Illusions, you draw comparisons between the Greek myths of Narcissus and Echo and contemporary society. What is the illusion?

GK: I think the illusion is the illusion of Narcissus. He is a character who is deeply in love with himself. He sees himself and his own image as the only objects of love and his body as the ideal body. He is a hunter pursued by many lovers. He enjoys being admired and wanted, but he disdains all his lovers. In his eyes, nobody is worthy of him. So he is punished by Nemesis, who places a curse on him making him fall in love with something that can never love him back – his own image. But the story of Narcissus cannot be told without the story of Echo, a nymph who falls in love with Narcissus and is cursed with the inability to say anything except the last words she has heard.

So, in this very dramatic love story, Narcissus is enchanted by his own reflection on the surface of the lake, while Echo is condemned to eternally repeat what Narcissus says. In Illusions, I wanted to play with this very dramatic scenario and raise the question of how we can break out of this colonial and patriarchal mold.

There is a deep sense of narcissism that I wanted to transport into today’s society. Narcissus becomes a metaphor for a society that has not resolved its colonial history, a white patriarchal society which is obsessed with itself and with the reproduction of its own image, making all others invisible. I first staged this story with an ensemble of actors, whom I always work with, and shot a 37-minute silent film. For the performance, the film is being projected as part of the scenery, while the story is told live. The actors are choreographed to move through a white space that gives us the illusion of an infinity: the illusion of a white infinity or a white cube that presents itself as a neutral and unmarked space, but is neither.

Upcoming Performances and Exhibitions in 2017: