” Life doesn’t mean anything unless you take position regarding society, the economy, culture …”

C& in conversation with the artist Sidy Diallo, participant of the Dak'Art 2014

Sidy Diallo installationview of ‚the crossing’ , 2014, in Dakar in front of the gallery Atiss (Aissa Dione), courtesy of the artist

C&: You graduated from Dakar’s National School of Arts in July 2013, you are taking part in the international exhibit at Dak’Art and you’ve won an award from the International Organization of La Francophonie (OIF). What a way to begin your career! Where should we start?

Sidy Diallo: After studying at the National School of Arts, the first thing that occurred to me was to submit a portfolio applying to the Dak’art Biennale, since I saw the importance of engaging with contemporary African practice. I was not at all an obvious choice as someone who had just finished school, given how rigorous the selection process usually is, but on top of that I even received the award from the International Organization of La Francophonie.

C&: Your artwork uses a distinctive technique employing points and lines. How did you develop it?

SD: It all came out of my work at art school. My objective was to find my own approach and personal style, which is why in high school I developed a historical project to get to know Fula shepherds on the pasture. But during my research I was mainly trying to depict the unseen cultural aspects of shepherds and their animals as opposed to straight representation. So I had to delve very deeply in order to produce something concrete.

The approach is very simple. My work usually consists of figures, points, lines and routes. But all of those elements are housed in a setting of movement, encounters, production and dynamism.

The shepherd is a nomad who moves from place to place to feed his livestock. He doesn’t have a fixed home, so he lets himself be guided by time and space and earns money on the side by bartering and trading with the people he encounters. That’s how I came to integrate lines into my ideas.

Along the way, I figured out that it was essential to link the shepherd’s circumstances with Africa’s. In other words, to try to adopt the same process that the shepherd uses to acquire and expand his herd, to situate him in our own context by creating new economic sectors that are still unexplored or even unknown.

That’s how I came upon this arrangement, which is nothing but a group of what I call “points.”  Each point is an essential element of the group as a whole. In other words, the engine needs the every point’s energy in order to run. It’s like a piece of equipment: every component does its part to keep the machine functioning well. If something fails, it risks stalling or, at the worst, breaking altogether; hence the points and routes of development. 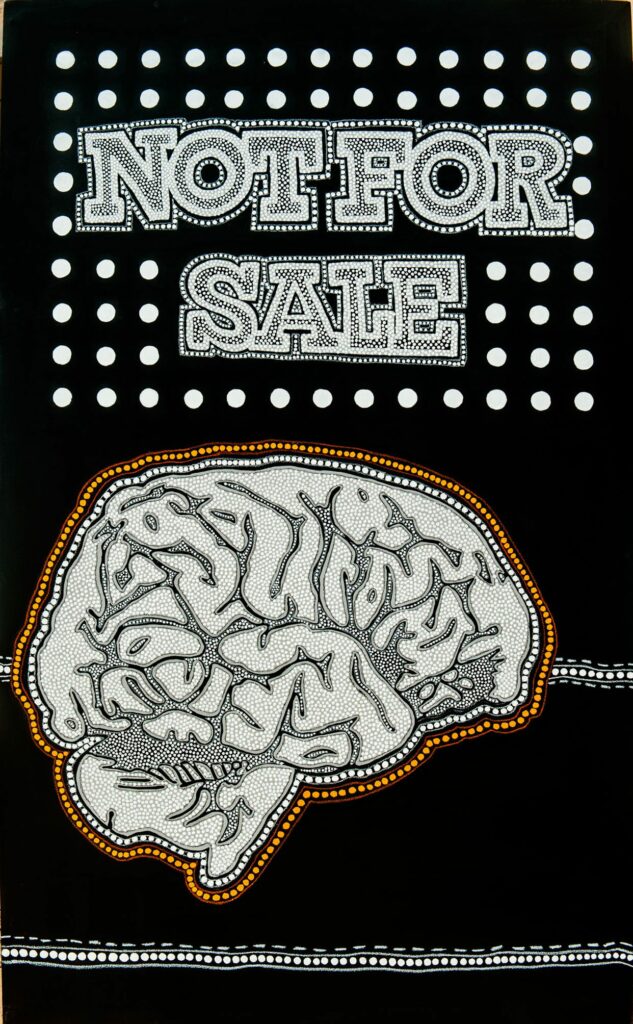 Sidy Diallo ‘not for sale’, courtesy of the artist

C&: The theme of this year’s Dak’Art is Produire le commun (“producing the common”) is. In what ways do the pieces you’ve exhibited, Not for Sale and Renaissance1, engage with that concept?

SD: Not for Sale and Renaissance1 are components of the engine I’ve recently developed to drive my research, specifically “points” and “routes of development,” but they are certainly related to Dak’art 2014’s “producing the common.”

The countries of the Third World need this talent more than anyone, and we know that creation is the only way an economy can establish itself. In the same context, we must continue to declare out minds “not for sale”; they should serve our own needs instead. In the visual composition of Not For Sale, I attempted to create a shared space by conceptualizing the idea of the poster (advertisement) in the piece. On that basis, you can read two layers of meaning into the piece as a whole: it’s both a poster and a contemporary artistic work. I was drawn to the poster as a medium with the goal of exposing everyone to the idea behind Not for Sale, as a kind of propaganda or awareness-raising measure.

As for Renaissance1, the point was to create a comparison between what I’ve called “the primitive stage of development” and humankind at large. As such, I’ve tried to raise the value of the “primitive stage” human by giving him a gold crown and a throne, invoking a transgressive return to a level of basic economic development in order to show that economic evolution is possible in the same context. As far as Africa goes, we can conclude that it’s busy planning its way to level X without considering the foundations underlying every economy, such as agriculture, for example, among other things.

In my opinion, the circumstances that victimize underdeveloped countries is the result of a kind of globalization that leaves behind a trail of destruction. We give in to it without understanding the big picture of access.

It’s important to realize that what’s obvious for one side isn’t for the other. It’s a question of balance. It’s like trying to climb a tree without finding out how deep its roots are, which can lead to enormous losses.

C&:  So your work is politically motivated. How would you define that?

SD:  I think there’s no such thing as life without politics. In my opinion, being political is what enables you to take a position on every level of the landscape of life. Life doesn’t mean anything unless you take position regarding society, the economy, culture, and so forth. In the end it’s a question of choice, because living means choosing as well as understanding your role and responsibilities for this world. And that’s why I believe that trying to be apolitical means forfeiting your own freedom to others. 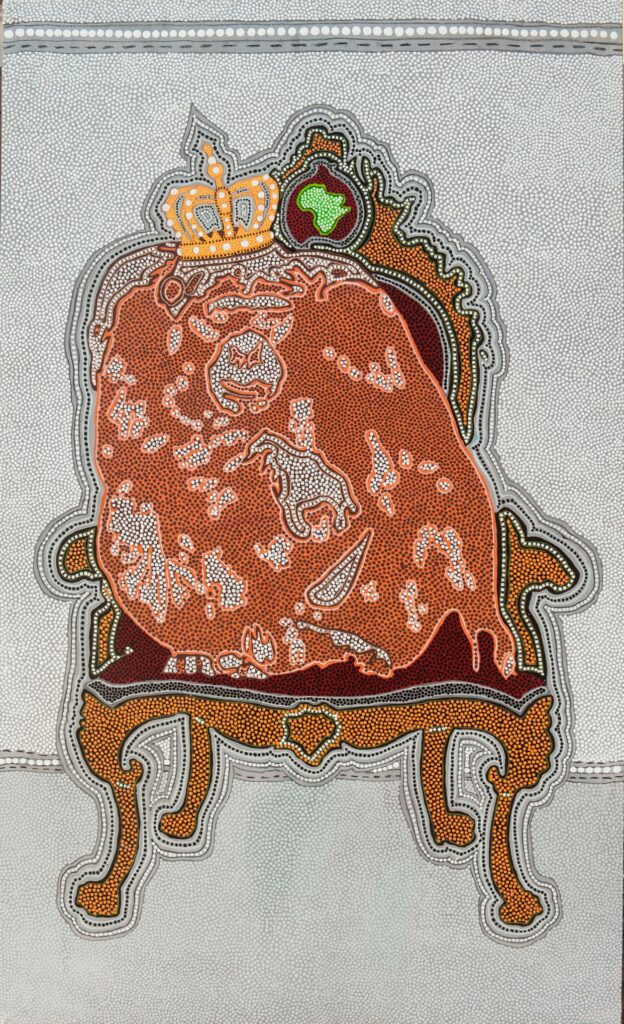 C&: You are also represented at OFF with your piece La Traversée (“The Crossing”), exhibited at Aissa Dione’s ATISS gallery. To what extent does this work touch on the same thematic material as Not For Sale and Renaissance1?

SD: All of my current work shares the same thematic material. The “Traversée” pieces exhibited at the ATISS gallery consist of a large canvas (a polyptych) and a giant installation of a rope bridge made of wool and wood. Likewise, development also has a connotation of progress, evolution, crossing… So the moment when you decide to leave point A and head for a point X, where we have no clue of the issues on the other side, is the very instant when we must give our minds a chance to step back, slow down, take a position, sort things out, and so on.

C&: And why are you participating in both IN and OFF?

SD: My work was first shown by Aissa Dione (ATISS gallery) as part of a group show during PartCours in December 2013. Her gallery, which really has access to an international network, also gave me the advantage of being able to spread my work and ideas to a large audience. In my opinion, it’s one of the few galleries in Dakar that has been able to maintain a consistently high quality level in terms of submissions and selections.

C&: What projects are you planning next?

SD: I’m entering a new phase of my search. I am aware of my age and I know that a long road is ahead of me. At my level, I’ll try to push forward and to stay involved as much as possible in contemporary practice, which never stops evolving. I’ll do whatever it takes to extend my work and to establish myself as a major artist on a global scale. Meanwhile, my residency with the OIF will broaden my perspective!