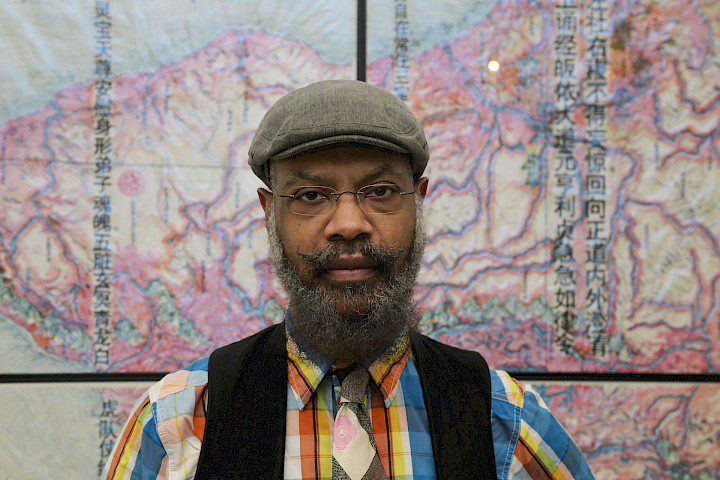 AKB Stiftung and SAVVY Contemporary have teamed up to launch this new and long-term commission grant for artists of colour based in Germany.

“Jean-Ulrick Désert’s body of work is impressive in its breadth and ingenuity. His decades-long work in Germany has made and shaped spaces for crucial questions and practices. Before most of us have begun working in the city of Berlin, Jean-Ulrick was already here and doing the work without which most of us would not be able to do our own work. We acknowledge his ongoing practice and body of work with this award.

Complex and multi-layered, the way his works nest particular locations, events, and histories within the cosmic and the cosmic within the earthly and everyday, highlights the philosophical and poetical depth of Désert’s approach to artmaking and traverses an incredible number of registers: from the political to the spiritual, and from tragedy to comedy. Désert figuratively pokes, prodes and tickles the grotesque characters he plays on screen and in public places to provoke lingering affective responses to Black experiences in Europe.

This award goes to Jean-Ulrick Désert for his deep engagement with his social/cultural practices. His work has the power to activate the viewer in engaging ways, to connect and reveal intertwined histories. His concern around digital technologies brings to the surface the complex nature of the entanglement of politics with society.

Déserts practice, be it site-specific public installation or museum display, enters into dialogue with surrounding cultural traditions, poignantly commenting on the social relations the artist observes around him. Désert has shown an admirable dedication to research, whilst at the same time demonstrating a deeply personal investment in his projects. His practice, which stretches several decades, is continuously relevant in its examination of identities and identity politics, of gender and race.”

Jean-Ulrick Désert says: “(…) The prize arrives for me at a critical time – in my art-practice and for us collectively. We are in a moment where we have reached a global pivoting point. A fulcrum hinged on a virus and our options for collective actions of creative production and experiences. Outside of crisis, I am often reminded of the concrete advice given to me thirty years ago by the late Okwui Enwezor: ‘Create relevant work.’ And during crisis, as we are in now, the cultural works fulfill their critical function in the social framework.”

Jean-Ulrick Désert (b. 1960, Port-au-Prince) is a Haitian born conceptual and visual artist based in Berlin, Germany. Désert’s artworks vary in form: public billboards, actions, paintings, site-specific sculptures, video and art objects. They emerge from a tradition of conceptual work engaged with social and cultural practices.

About the Wi Di Mimba Wi Prize
In addition to celebrating and rewarding an artist’s outstanding work, this grant is an invitation to relate, to collaborate and to create together – according to the philosophies and practices lived by SAVVY Contemporary. The intent with this initiative is to build a strong relationship and support for artists of colour towards a richer and more diverse cultural landscape.

Thanks to the generous support of the AKB Stiftung, the selected artist receives a one year working grant of 30.000 EUR, as well as funds to support the creation of a new artwork and curatorial support. It is planned that the new piece or body of work will be exhibited at SAVVY Contemporary and other venues.

The grant is open to artists of colour based in Germany of all backgrounds, media, ages, stages of career. Candidates were nominated by a board of advisors and selected by a five-member jury. This programme is a long-term engagement to build sustainable support structures in the art world. The grant will be awarded every two years.

The AKB Stiftung is a foundation based in Einbeck, Germany. Established by Carl-Ernst Büchting in 1998.