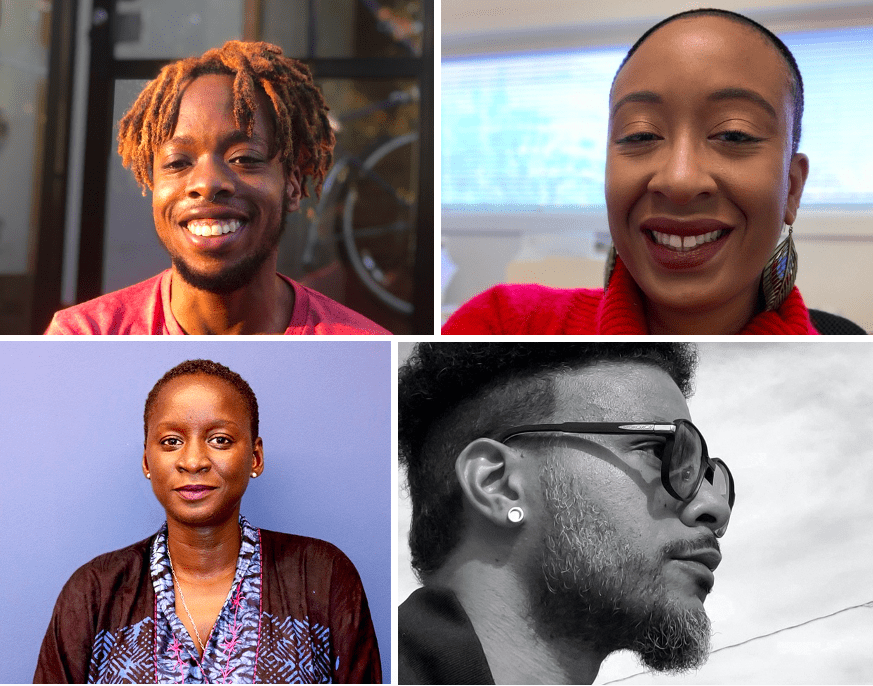 Anaïs Duplan, Negarra A. Kudumu, Marie Hélène Pereira, and Ronald Rose-Antoinette have been named the inaugural Curatorial Research Fellows as part of the Marian Goodman Gallery and Steve McQueen initiative in honor of the late Okwui Enwezor.

Independent Curators International (ICI) announces the Inaugural Curatorial Research Fellows as part of the Marian Goodman Gallery Initiative in honor of the late Okwui Enwezor, and doubles the number of original fellowships offered in response to impressive levels of applications.

Launched in January 2021, the initiative was conceived by artist Steve McQueen to create educational and research opportunities through ICI for Black, Indigenous, and People of Color (BIPOC) curators, including two Curatorial Research Fellowships annually.

141 curators responded to the initial call for applications for Curatorial Research Fellowships open to BIPOC curators based in the US and curators of African descent based anywhere around the world. Applications came in from 19 US states, Washington DC and Puerto Rico, and from 26 countries, including 14 in Africa. The response to the program, impressive in size and geographic scope, is not only the result of ICI’s curatorial networks but also a reflection of the need for research opportunities for BIPOC curators.

Given this overwhelming response and the strength of the candidates, two additional fellowships were immediately made available at Steve McQueen’s behest and with his support.

ICI’s Executive and Artistic Director Renaud Proch remarked: “We were so inspired by the sheer number and quality of the proposals. Being able to offer four fellowships rather than two and double the scope of the program this year has been truly meaningful, and we’re deeply grateful to Steve McQueen for making it possible. This expansion adds to ICI’s already growing program of curatorial fellowships, which are critically necessary to foster new voices in the field.”

The four fellows were selected by Hitomi Iwasaki, Director of Exhibitions and Programs at the Queens Museum; Tumelo Mosaka, independent curator; and Renaud Proch, ICI’s Executive & Artistic Director. ICI Curatorial Research Fellowships will provide them with a tailored framework for independent research, guided by mentors, leveraging ICI’s programs and network of collaborators as a resource, as well as a $10,000 stipend. Tumelo Mosaka will serve as lead mentor for the program.

Mosaka shares: “Someone once said ‘we rise by lifting others.’ This represents how Okwui Enwezor inspired me to do for others what he did for me. The ICI Fellowships offer an opportunity to bridge gaps, build networks across continents, and be an agent for social transformation.”

Anaïs Duplan is a trans* poet, curator, and artist. He is the author of the upcoming book I NEED MUSIC (Action Books, 2021), a book of essays, Blackspace: On the Poetics of an Afrofuture (Black Ocean, 2020), a full-length poetry collection, Take This Stallion (Brooklyn Arts Press, 2016), and a chapbook, Mount Carmel and the Blood of Parnassus (Monster House Press, 2017). As an independent curator, he has facilitated curatorial projects in St. Louis, Chicago, Boston, Santa Fe, and Reykjavík. In 2016, he founded the Center for Afrofuturist Studies, an artist residency program for artists of color, based at Iowa City’s artist-run organization Public Space One. He works as Program Manager at Recess, Brooklyn. Duplan’s research engages with multidisciplinary, Black avant-garde methodologies towards documentation, through the marriage of poetry and the visual arts, and explores what service poetics and art-making practices offer to liberation, memory, and grief.

Negarra A. Kudumu lives and works in Seattle, where she is the recently appointed Curator at the Center for Contemporary Art (CoCA). Kudumu is an independent scholar, published writer, and healer working at the intersection of art and healing with a focus on contemporary art from the Pacific Northwest, Africa, South Asia, and their respective diasporas. In 2017, Kudumu co-organized the group exhibition Back Stories with Mariane Ibrahim, director and founder of the eponymous gallery, now headquartered in Chicago. Building on her research into multidisciplinary collectives composed of African and BIPOC artists operating on the African continent and in its Diaspora, Kudumu plans to investigate their collaborative creative processes; tacit codes of care, comradery, and professional support; and modes of engagement with the global art, film, and music industries.

Marie Hélène Pereira is a curator and the Director of Programs at RAW Material Company in Dakar, Senegal. She co-curated Scattered Seeds in Cali-Colombia (2015-2017) and curated Battling to normalize freedom at Clarkhouse Initiative in Mumbai, India (2017). She was a co-curator of Canine Wisdom for the Barking Dog – The Dog Done Gone Deaf. Exploring The Sonic Cosmologies of Halim El-Dabh with Dr. Bonaventure Ndikung at the 13th edition of Dakar Biennale of Contemporary African art (2018). Feeling urgency to engage with institutional propositions of thoughts and actions with real life consequences, Pereira will dedicate time to investigate pockets of resistance that had a real impact on specific revolutionary moments: including journalist Carlos Cardoso’s Metical fax journal in Mozambique; the Escola pilotos and caring practices from the PAIGC women activists in Guinea Bissau, Cape Verde and Senegal; the experience of JAM gallery and the empowerment of Black artists in New York; and Afro Colombian women clustering at La Casa del Chontaduro in Cali Colombia.

Ronald Rose-Antoinette is a writer, scholar and independent curator based in Martinique. He is the co-author of Nocturnal Fabulations, an experimental book on Apichatpong Weerasethakul, and the curator of Open Justice (2020), an online film exhibition commissioned by Denise Ferreira da Silva and the University of British Columbia; soul, with a difference (2020), a group exhibition at articule in Montreal; and The Musical Question and The Musical Answer (2021), an open listening practice featuring Le Mardi Gras Listening Collective, commissioned by the Musée d’art contemporain de Montréal. Rose-Antoinette’s research is invested in documenting and improvising the deviant, intricate affairs between Black and Queer socialities under and away from the normative/hygienic logistics of straightness and fitness. Currently, his research is devoted to the composition of sustainable modes and models for sharing and tending to Black Queer cultural expressions and aesthetics sung by the Caribbean.