In Minimalism Everything Counts

The German-born artist Julia Phillips met C&’s Will Furtado to talk us through her inspirations and the work she has decided to present at the 10th Berlin Biennale.

Julia Phillips is a Hamburg-born artist based in New York City whose work addresses the body and mechanisms of oppression, among other subject-object relationships. Through video, sculpture, drawing, and printmaking, the artist uses materials metaphorically to create artworks that are both sensual and conceptual. In addition to taking part in the 10th Berlin Biennale, Phillips currently has a solo show at New York’s MoMA PS1 and is included in the New Museum Triennial. We spoke to the artist to discuss the problematics of an assumed shared knowledge, how growing up surrounded by Bauhaus-inspired materials has shaped her mentality and aesthetic, and how Germany’s post-WWII reparation payments could work as a model for other types of reparations.

Contemporaray And (C&): What sort of culture and media did you grow up on?

Julia Phillips: I wasn’t allowed to watch TV as a child or teenager, except the news and a very small selection of harmless programs. Of course when I was visiting friends’ houses I got my MTV fix. Music-wise I was influenced by a broad range of artists. I’ve been a Michael Jackson fan from the moment I can remember music. My mother also brought my attention to the opera singer Jessye Norman, who is still a major inspiration to me – her dedication and the integrity with which she approaches her art. As a teenager one of my biggest influences in terms of female empowerment and Black female role models was Destiny’s Child. 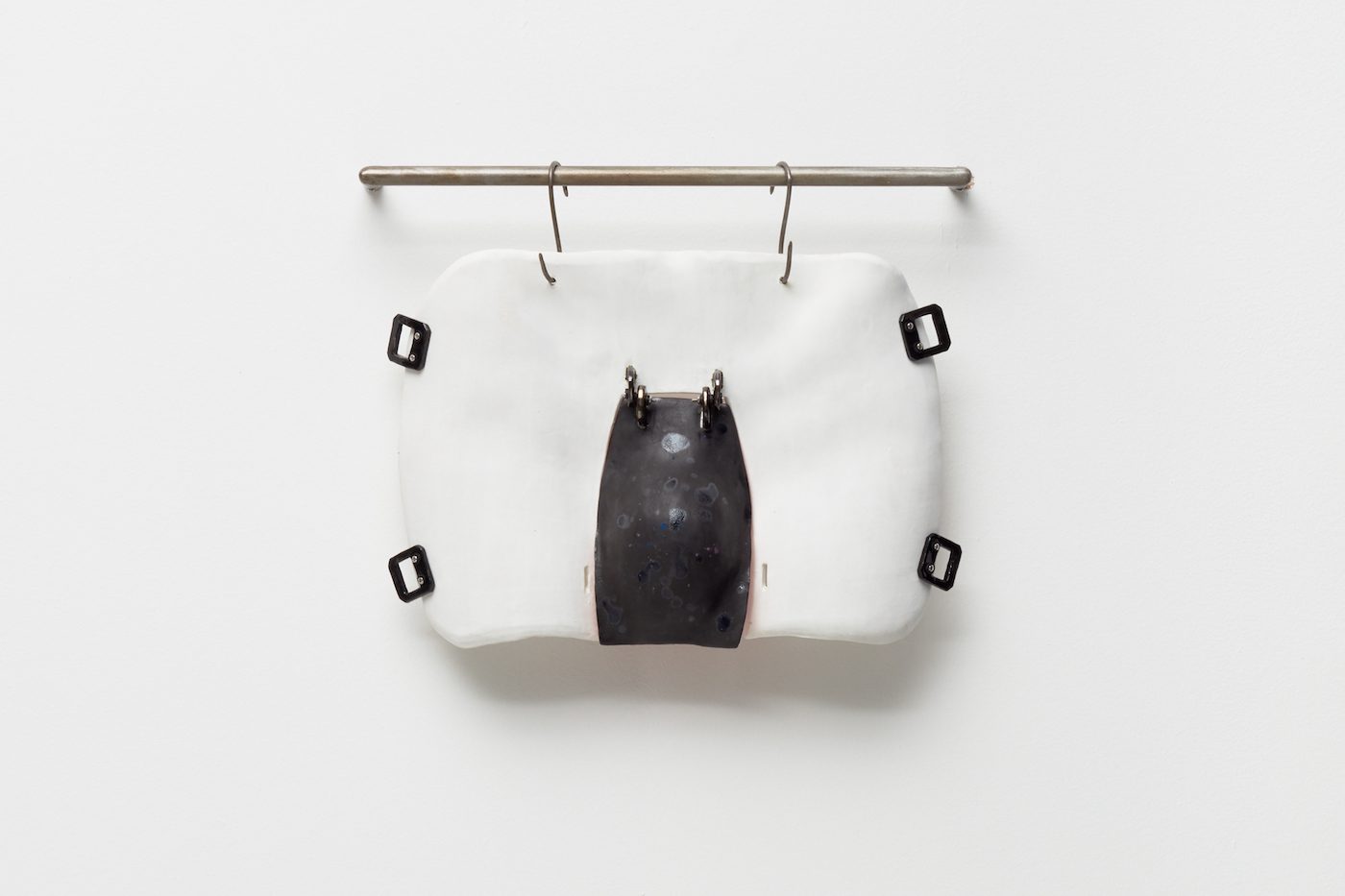 C&: Your works have titles in English. Why not in German?

JP: I remember being influenced by Sol LeWitt’s work quite a bit when I first started traveling to New York in 2008. I kept finding reasons and ways to come to New York and loved going to Dia:Beacon and looking at LeWitt’s wall drawings and the precise descriptions of what they are. For instance Isometric figure with progressively darker gradations of gray ink wash on each plane (1984). I mean, it’s just fantastic. It tells you exactly what it is, and it is so much more than that, to a degree that it really isn’t what the title says it is. Beautiful. There is something about English being my second language, andthe desire to express something precisely in its alienness, that I find attractive. My sculptures have specific functions and each element – also in other works that aren’t sculptures – have a purpose. A deliberateness. If Minimalism taught me one thing it is “everything counts.”

C&: One of your titles refers to Josephine Baker. Why her?

JP: Speaking of identification. There are a few markers to Josephine Baker’s persona that I can identify with or see family history reflected in. A Black American woman from the South, who, tired of segregation and violence against Black people, migrates to Europe with the hope of a serious career and more opportunities. Who finds herself exoticized in a predominantly white country, eroticized as well. As a fair-skinned, slender, energetic joyful source of endorphins. Who has a complex mind and a developed intellect, is engaged with the political situation but known and represented as a sex symbol. 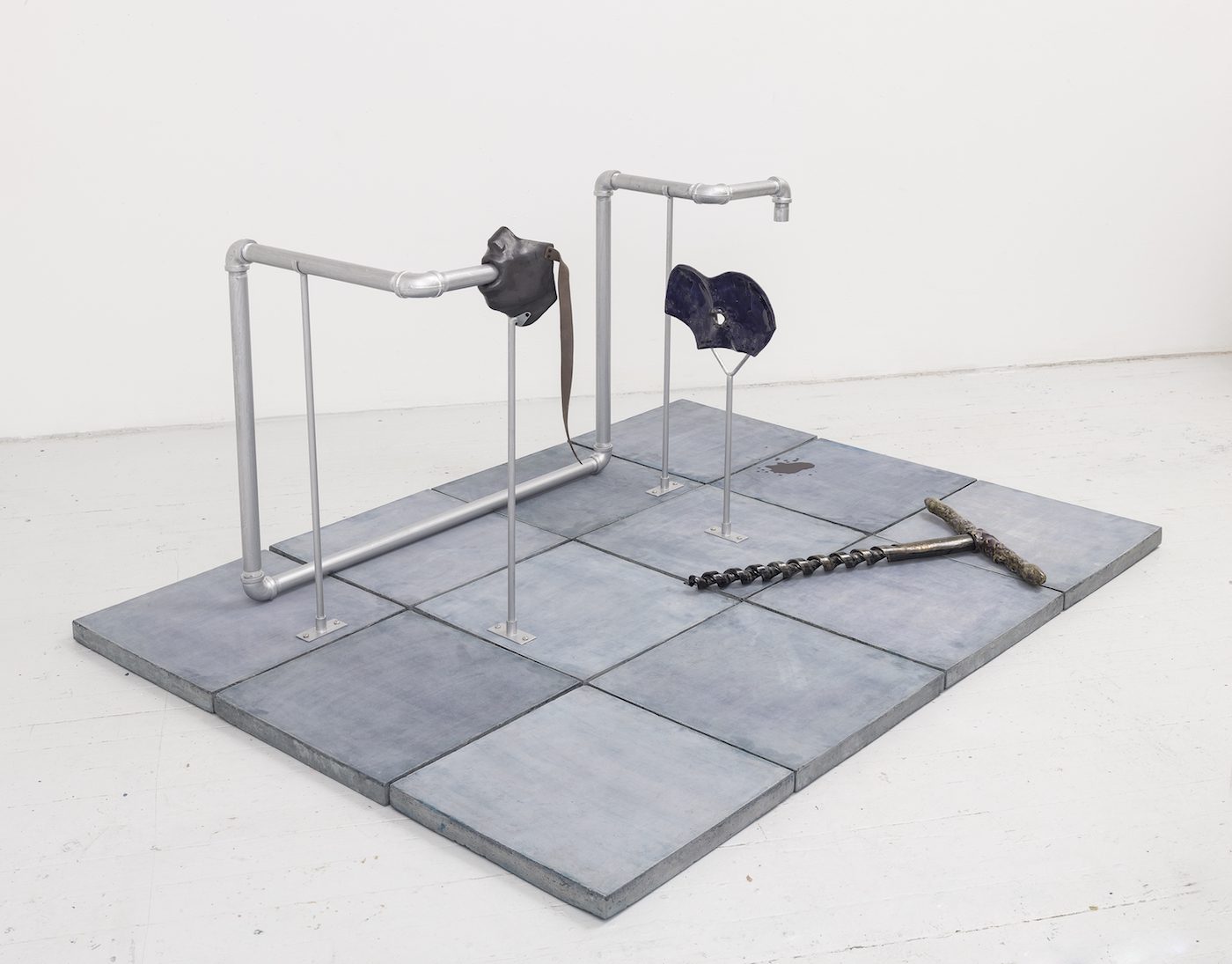 C&: How do you negotiate your German background in your work, as an artist who is based in NYC?

JP: I don’t really – at least not consciously. My German education just reminds me of the fact that assumed shared knowledge – anywhere really – is a problem. Our knowledge is informed by so many influences, and education is just one of them. Many things that I learned in school and that I simply could not identify with just passed right through my brain and didn’t stick. And some knowledge did. But then I also sought out certain knowledge by surrounding myself with certain people. It’s so subjective. If I navigate anything, it is the voices that I choose to listen to. In terms of my German background and heritage, I think Germany shaped a big part of my mentality. And of my aesthetics. My father, as a Bauhaus-inspired architect, built the house that I grew up in. I was surrounded by glass and steel (and some concrete). My sculptures consist of ceramics, steel (and lately concrete). Another thing that comes to mind is a job that I had in 2015/16. I was working as a telephone operator for the German missions to the UN and the consulate. I handled all incoming calls and a lot of them I had to transfer to “Wiedergutmachungen” – German reparation payments to those Jewish people who qualify, living in the New York area. Just recently I was thinking about guilt and responsibility and reparations. And how such payments would work for the historically colonized people living here in the US. 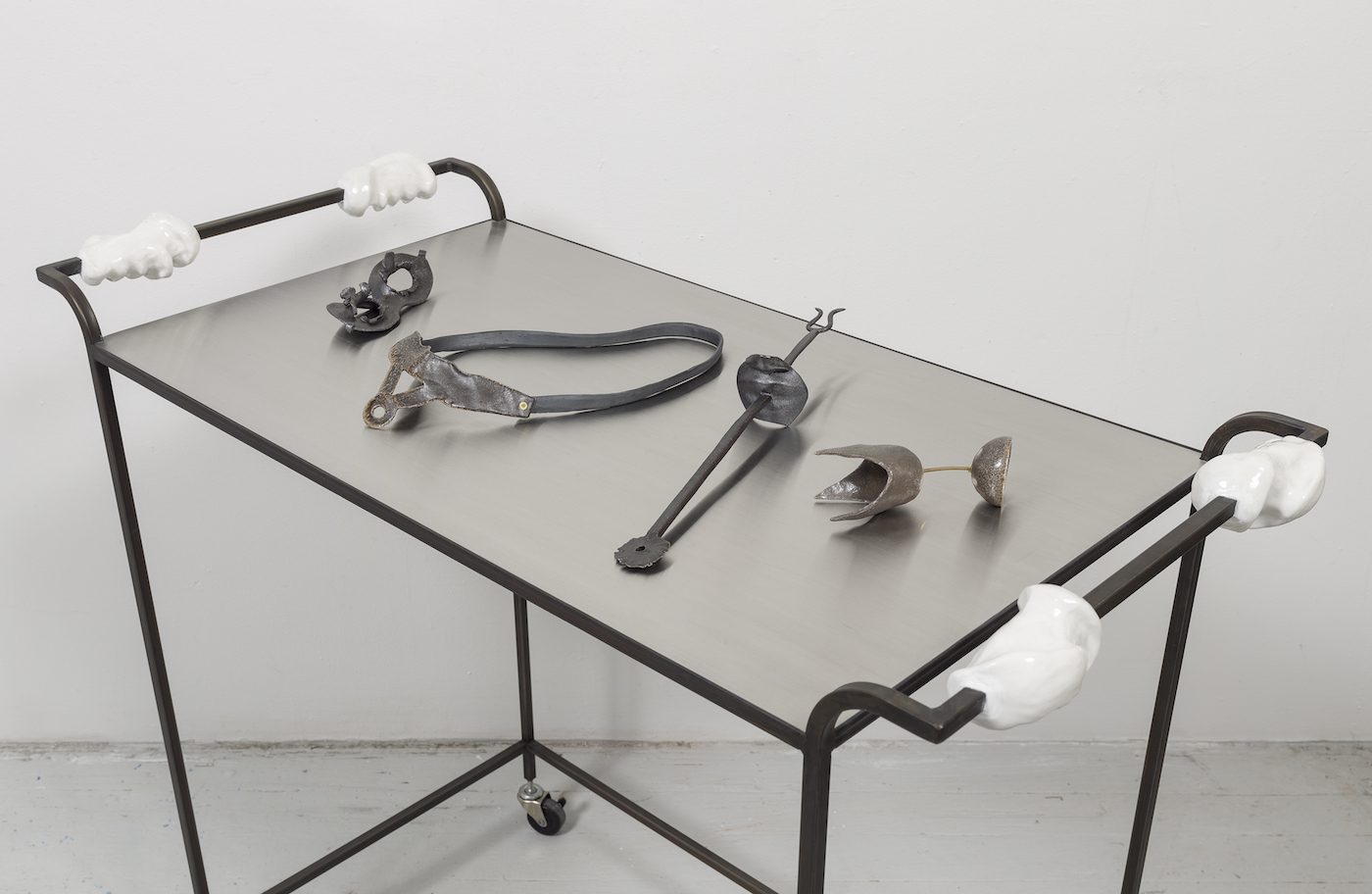 C&: What is the concept behind your work at the 10th Berlin Biennale?

JP: There is one sculpture and a series of prints. The sculpture is titled Operator I (with Blinder, Muter, Penetrator, Aborter), 2017. The piece resembles a surgeon’s trolley, with four “tools” on top, which the titles in parentheses refer to. I think of that object as an analogy to a relationship, that’s why there are two sets of handles attached to the trolley, to underline the collaborative aspect. The work is quite personal, and at the same time addresses mechanisms of oppression that can exist on social and political levels as well. “Muting” for instance is a mechanism that can appear within an intimate relationship, but it can happen systemically as well by violating freedom of speech rights. And the prints that were selected for the bienniale are part of a series called Expanded, collagraphs that show stretched pantyhose printed on paper.

C&: What does it mean to you to show your work in a German context?

JP: When I think about my art education in Hamburg, it was very common to hear the term “Frauenkunst” – “women’s art” – especially when looking at a print that shows pantyhose. So the reading of the work will be different I think. But I don’t think that my work selected for this exhibition is very nation-specific. I think it borrows quite an ancient language of tools and human gesture that ideally is relatable to a broad audience. But I am sure the language used for unpacking the work will be different, and so will the references.

Julia Phillips is a participating artist in the 10th Berlin Biennale for Contemporary Art, taking place from June 9 to September 9, 2018.