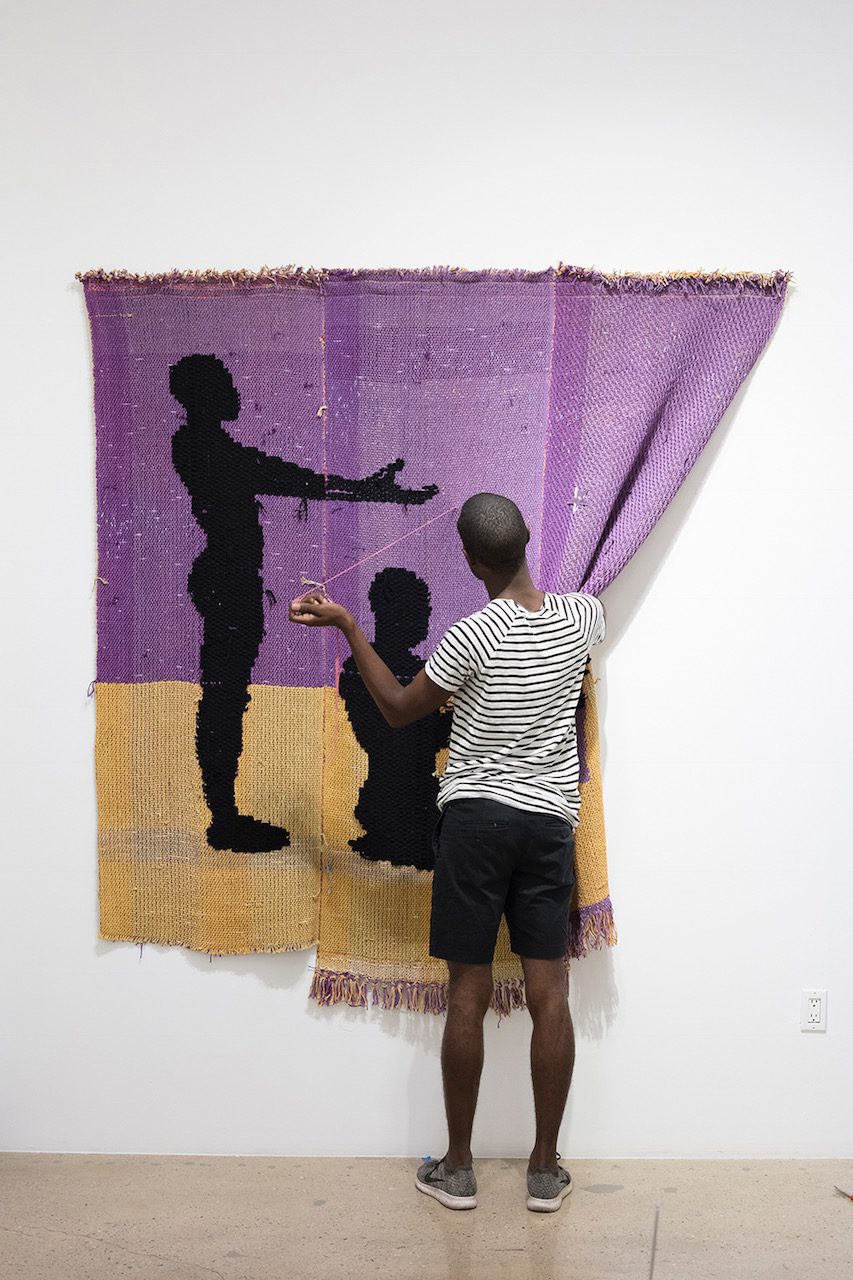 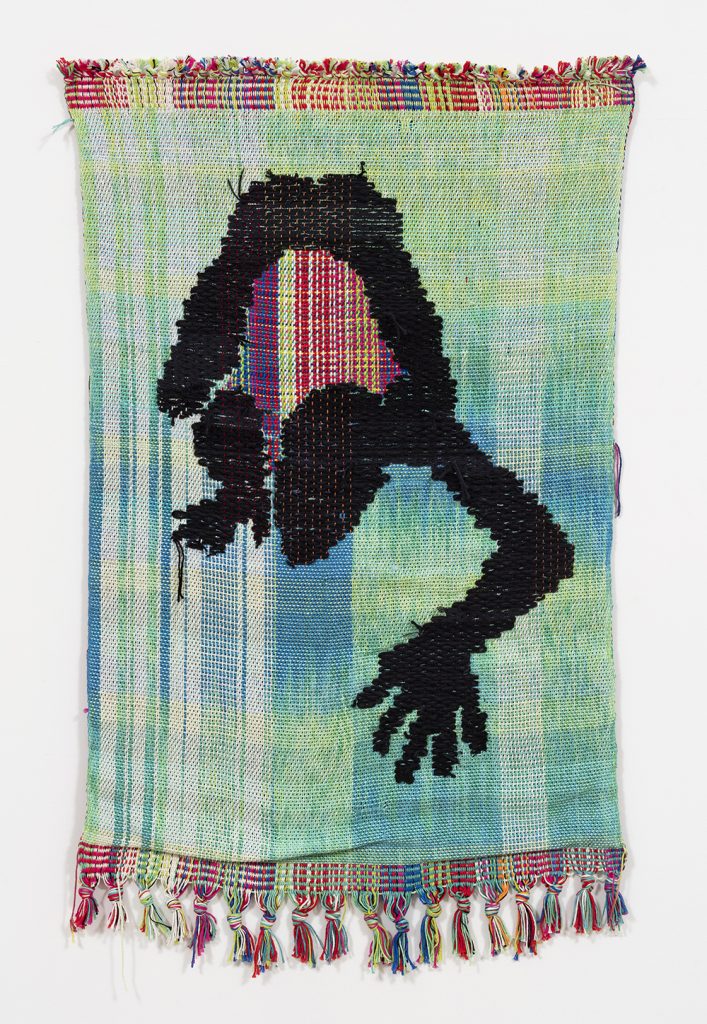 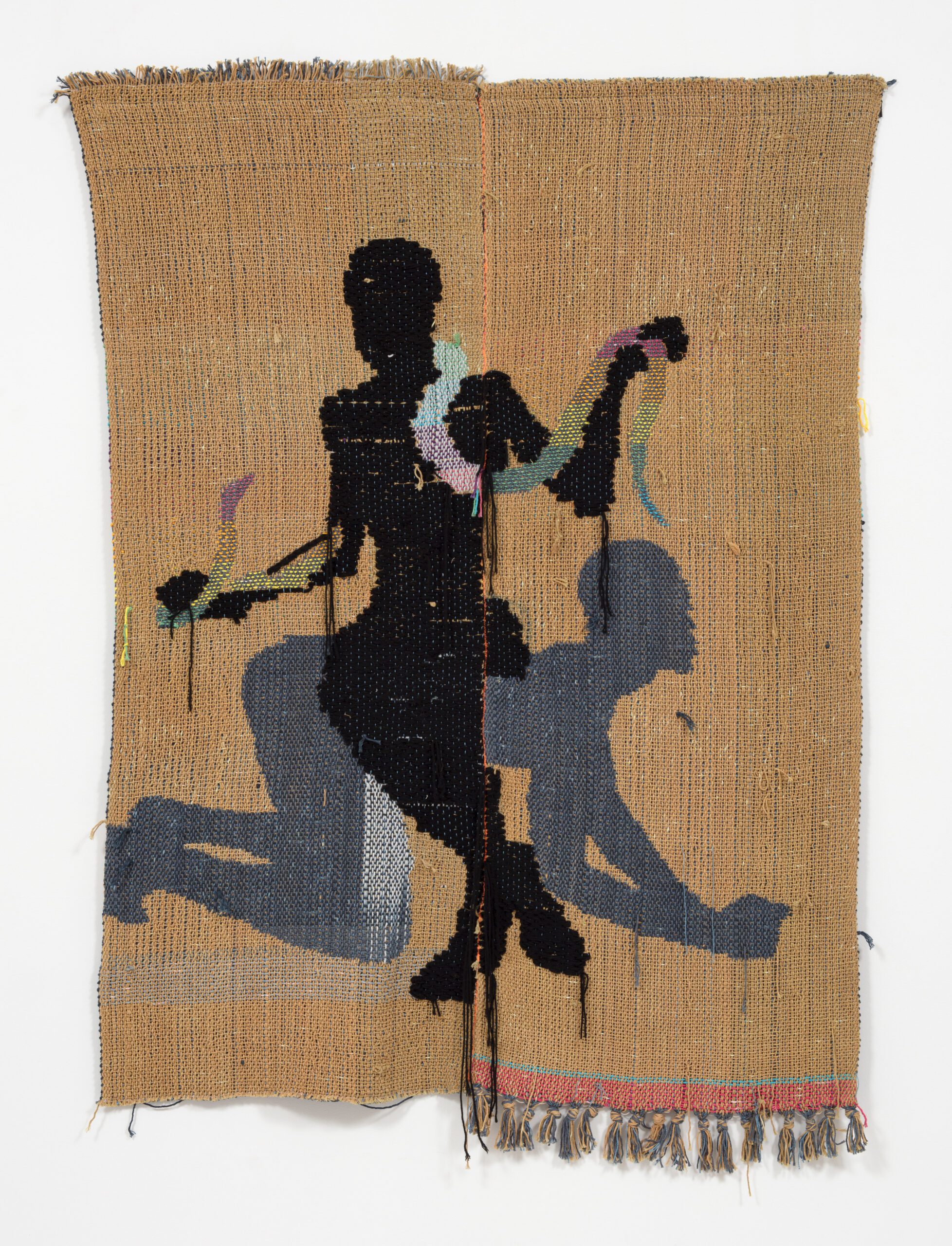 In Conversation with Diedrick Brackens

Los Angeles-based artist Diedrick Brackens is a rarity in the growing virtual spheres of contemporary art. His practice of weaving and textile making raises important sociopolitical questions about manual labor, our growing non-physical relationship with the world, and specifically about the history of the United States. Brackens is interested in the exposure of oppressive and exploitative structures. With C& the recent winner of the Joyce Alexander Wein prize spoke about Black bodies, the American South, and catfish.

Diedrick Brackens stiches "the cup is a cloud", 2018. Courtesy the artist.

Contemporary And: Congratulations Diedrick! Receiving this prize is an incredible achievement for your practice and career. Where were you when you first heard about it?

Diedrick Brackens: Thank you! It has been the biggest moment of my short career and I am so grateful. I was at home eating breakfast when Thelma Golden called me. I didn’t even think she knew I existed.

Diedrick Brackens, in the valley, 2018. Courtesy the artist.

C&: When I was first introduced to your work, I was immediately fascinated with your practice. In particular, its hapticity and the manual labor involved; this has become such a rarity in our digital age. Would you describe the relationship between your body and the loom as intimate?

DB: Yes, it is quite an intimate process to make fabric. Even before you get to the loom there are certain steps that require you to use your full body to measure yarns and prepare them for weaving. You spend a lot of time with the loom, pulling threads through slots and holes, tying them to wood and metal appendages, and ultimately lifting and lowering your limbs and those of the machine in tandem.

C&: Narrative is an integral part of your practice. Your works depict scenes, moments, and situations that have a relationship with the South of the United States. I’m thinking about your piece “The Catfish,” for example. You were born and raised in Texas. Can you elaborate on the role of geography in your work and the specific narratives it offers?

DB: I am always looking to the American South for inspiration simply because it is home. I know that the place has a conservative and racist history and I don’t romanticize that, but being from a place sort of marks you, I think. I embody identities that defy the histories and narrow definitions of the region. I also have made use of the catfish a few times. For me, it is the most southern of creatures. It shows up in the cuisine, but is reviled more than it is gloried because it is a scavenger. Often black bodies are aligned, in horrific ways, with animals. I am trying to reexamine this, among other things.

C&: You also teach as an Assistant Professor at Cal State Long Beach. Do you see a responsibility in passing along the craft and tradition?

That’s a difficult question. I see my responsibility centering around mentorship more than specifically cultivating a new cohort of weavers. There are such a precious few Black art students I have the chance to interact with in my time as an educator – I can count them on one hand. And I want to see that change. I want to pass on a sensitivity to material and process-driven approaches to making. I value craft practice and mastery and I want to continue to push for it as the art world continues to get techie.

C&: This has been an exciting year for you with several exhibitions, among them Made in L.A at the Hammer Museum, now culminating in the Studio Museum’s Joyce Alexander Wein prize. What will 2019 look like?

The first half of 2019 is filling up with exhibitions. I am hoping to spend the second half traveling the South researching the Underground Railroad – maybe I will make it to the Promised Land.

Diedrick Brackens (b. 1989 in Mexia, TX) lives and works in Los Angeles, CA. He received his BFA from University of North Texas, in 2011, and MFA in textiles from California College of the Arts, in 2014. Brackens work has been shown in solo exhibitions at Ulrich Museum of Art, Wichita (2017); Steve Turner Gallery, Los Angeles (2016); and Johansson Projects, Oakland (2015). Group exhibitions include SOMArts, San Francisco (2014); Berkeley Art Museum (2014); 3rd Ghetto Biennale, Port-au-Prince, Haiti (2013); and Museum of Geometric Art, Dallas (2011). Brackens is a recipient of the Barclay Simpson Award from the California College of the Arts (2014) and Clare Hart DeGolyer Memorial Fund (2011).