Have a second sight with Bianca Baldi

How Spaces Can Be Transformed

Viktoria Draganova talks to Bianca Baldi about her first institutional solo exhibition “Eyes in the Back of Your Head” currently on view at the Kunstverein Harburger Bahnhof.

Viktoria Draganova: You current exhibition, Eyes in the Back of your Head at Kunstverein Harburger Bahnhof, expands on a technological experiment revealing modernist delusions of grandeur. Your starting point is Funkstation Kamina, the first telecom tower in Togo built by a German company. What prompted you to engage with this architecture?

Bianca Baldi: I first came across a series of photographs of the radio tower in the collection of the Slovene Ethnographic Museum in Ljubljana. The images commissioned by Telefunken were striking to me in the way they were styled to present modern progress in a supposedly barren landscape. It was the story of the construction that moved me most as this huge investment also revealed a huge imperial gesture in the ambition of linking both states wirelessly. Ironically, due to the outbreak of World War I it would only be fully operational for a few months and only very few messages were transmitted. Nevertheless, I am intrigued by this gesture of creating this first connection as it is a metaphor for a historical shift in the way we think about power, moving from a centralized point to a realm of invisible transmissions. 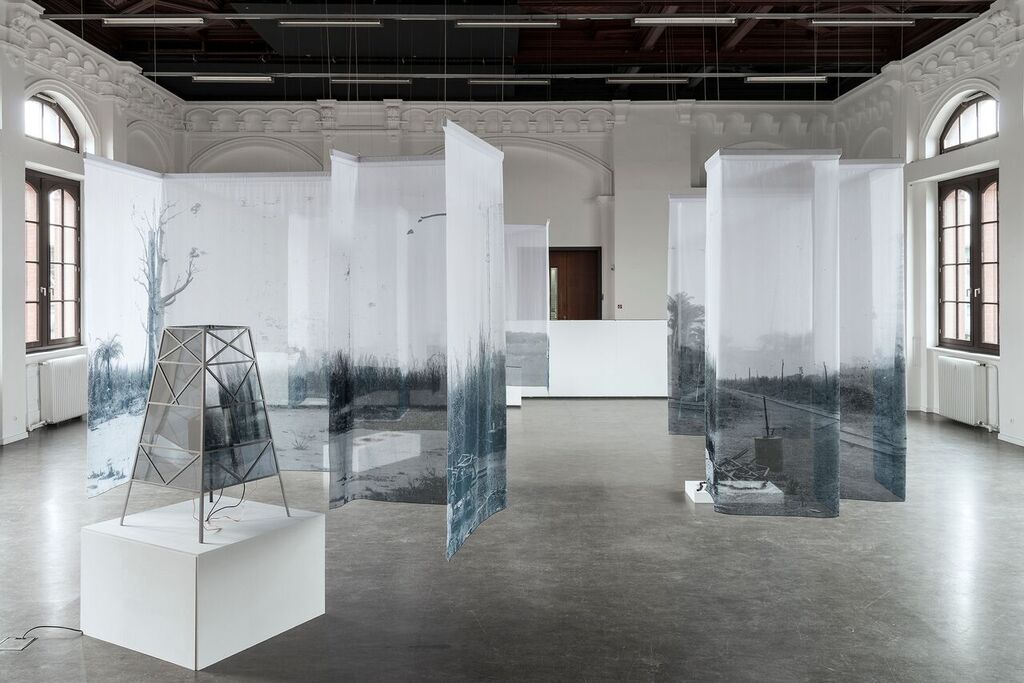 VD: The structuring element of the show is transparent fabric hanging from the ceiling in a specific arrangement. Printed on it is a collage of the above-mentioned photographs of the tower’s construction site. What type of space do you create in the exhibition?

BB: The structure is based on the plan of a talisman scroll that was collected by the same Slovenian engineer who designed the radio tower. In my practice I am curious about how spaces can be transformed in order to acquire a new quality – in this case, this quality is subjective or magical. The lines on the talisman scroll originally inscribed by a cleric are applied to the exhibition space that becomes a talisman against disillusionment. I’m also interested in how this magical experience could potentially be triggered within the space through the body of the visitor walking in it.

What is notable about this kind of talisman is that its magical potential works by creating an infrastructure, a pathway, to trap the evil spirit. For me this is similar to the radio tower, which is both formally and conceptually another infrastructure that enables the transmission of imperceptible forces. Although the scroll and the tower share the same language – that of the medium, the transmission, the channel – they could hardly be on more opposite ends of the knowledge spectrum.

VD: When entering the exhibition, we hear a voice echoing through the space. I found myself navigating through the labyrinth of hanging images to finally find its source, a tall geometric sculpture.

BB: In my practice, I often create fictional characters that act as allegorical stand-ins. The raspy voice one hears belongs to the character of the medium reciting an incantation. The voice emanates from the sculpture fashioned after Funkstation Kamina and guides visitors through the staged landscape. It suggests the magical, in stark opposition to the machine, the tower, the colonial intervention. The historical waiting room of the Harburger Bahnhof on the other hand is filled with a deep bass frequency which stimulates an urgent pulse in the visitors’ bodies – somewhere between a heartbeat and a radio signal. 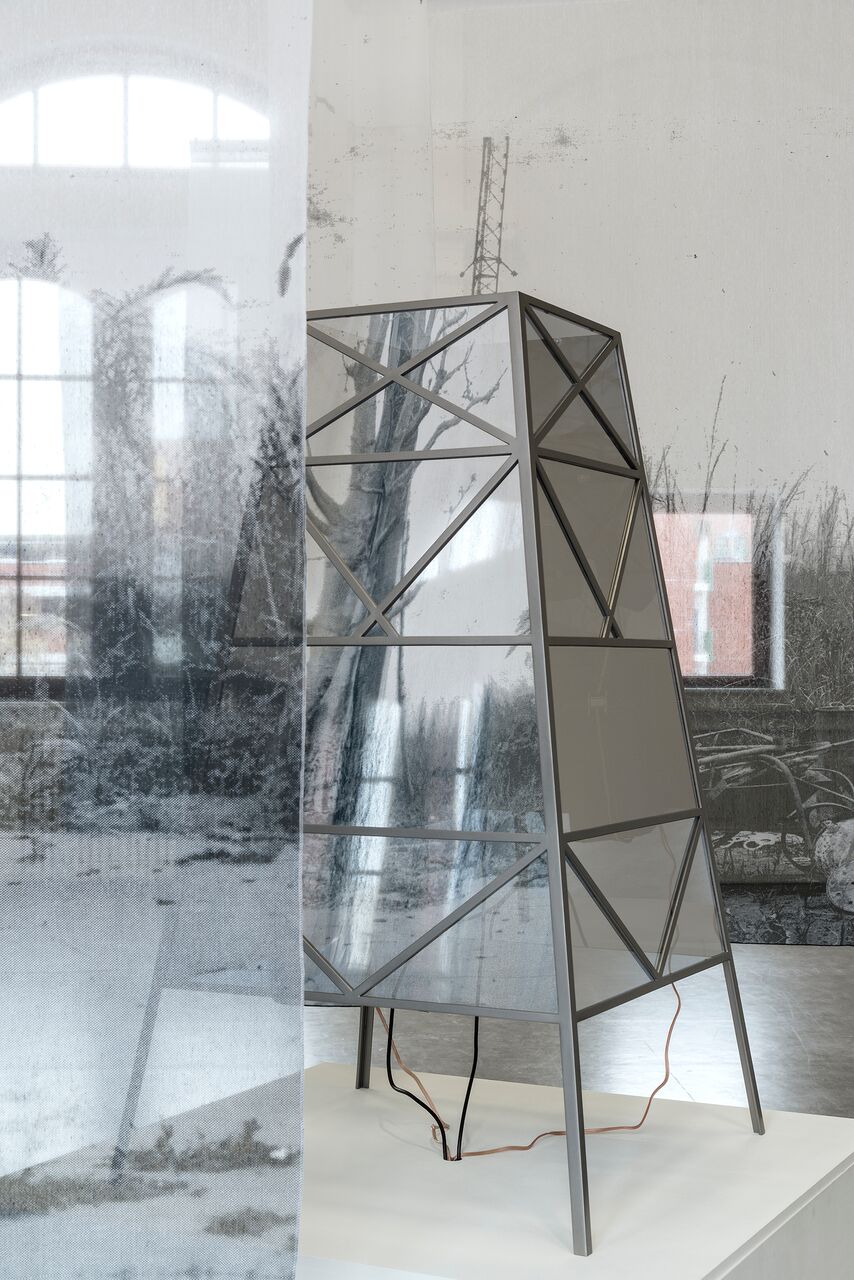 VD: The sculpture has a mirrored surface that also serves as the screen for a film, a CGI (Computer Generated Imagery) rendering of the space we are in. What is the nature of this “second sight” you are creating here?

BB: The CG space created in the film suggests a second sight, different from the vision limited to your eyes. It is an additional sense, a feeling of being out of your body, and the CG vision allows you to traverse the space anew, showing you perspectives that defy the limits of the human body.

VD:  Just like in your previous exhibition, Pure Breaths at Swimming Pool, Sofia, the voice seems to play a central role: it activates the space while it confronts the way we believe to obtain knowledge about our present and past.

BB: Yes, what we understand as knowledge is something formalized through a legitimization process, be that by tradition, media or institutions. In Pure Breaths, the image of the breath became my proposition for an alternative way of experiencing something, a suggestion that you can breathe something in before you see it. It is proposing that there is a possibility to breathe in sensation as opposed to knowing something. The presence of the voice runs as a thread through the space, giving it a corporeal dimension. Experience is rather individual and related to one’s own body. Perhaps it is from this point we can rethink what constitutes knowledge.

Bianca Baldi, Eyes in the Back of Your Head, 24 March – 4 June, 2017, Kunstverein Harburger Bahnhof, Hamburg.

Viktoria Draganova is a writer and curator living between Frankfurt and Sofia, where she is the director of the project space Swimming Pool.