In this series, C& and ArtsEverywhere commission texts inspired by the books in C&’s Center of Unfinished Business installed at the Akademie der Künste in Berlin. Will Furtado is inspired by Frantz Fanon’s Black Skin, White Masks and writes about how the book went on to influence intergenerational Black queer artists despite its shortcomings on gender issues.

“O my body, make of me always a man who questions!” is one of the most memorable quotes from Frantz Fanon’s Black Skin, White Masks. Released in 1952, the book has become a seminal text in postcolonial theory for its interrogation of the colonized self and its unpacking of the complex ways in which identity, particularly Blackness is constructed and produced in the context of colonization.

The main premise of the book is that the process in which Black men internalize myths of Blackness invented by colonial society leads to them damaging their psyches. Consequently this produces an inferiority complex that leads Black subjects to appropriate and imitate the culture of the colonizer, especially if they are upwardly mobile and educated (like Fanon himself).

The book and the author are largely influential but also controversial. To this day the book still draws praise for the issues it identifies, and criticism for its generalization of feminist and queer issues. Yet, so instrumental and groundbreaking are the main ideas of the book that it went on to influence whole generations of Black queer artists who not only used Fanon’s ideas but transgressed them to rethink the nature of Black homosexuality, masculinity, and femininity.

Fanon described colonialism and its impact as being largely made up of visual experiences. This colonial gaze, according to him, appropriates and depersonalizes its subjects while ignoring their way of seeing. In turn, queer theorists, especially in film, have appropriated these terms and applied them to gender. Rotimi Fani-Kayodé was one of those artists and he even made art that directly referenced Black Skin, White Masks. “On three counts I am an outsider,” the Nigerian artist said in relation to his postcolonial position in the world. “In matters of sexuality; in terms of geographical and cultural dislocation; and in the sense of not having become the sort of respectably married professional my parents might have hoped for.” Born in Lagos in 1955 and from a wealthy Yoruba family, at the age of 12 he moved to England with his parents as a refugee from the Nigerian civil war. After his studies in fine arts and economics in the US he returned to London where he worked as an artist until he passed in 1989 due to an HIV-related illness condition.

Fani-Kayodé combined sexual and cultural differences to deal with Black homosexuality head on. In The Golden Phallus (1989) the artist shows a young naked athletic Black man posing on a platform wearing a white beak mask and looking into the camera. His penis is gold-plated and held up with a white string. So, on the one hand Fani-Kayodé explores Black sexuality in relation to a Black subject being gazed upon by the world. But on the other he challenges Fanon’s suggestion that male homosexuality only exists for the enjoyment of the white man by attaching the subject’s penis to a string and showing that he is not readily sexually available. Yet the multilayered work further challenges straight male assumptions of homosexuality with its ambiguous quality, full of both deliberate connotations and various possibilities for interpretation.

Also in London, in 1995 a pivotal group exhibition in London marked a moment considering the importance of Frantz Fanon and ways in which his writings intertwined with artistic practices, gender, and race. Entitled Mirage: Enigmas Of Race, Difference & Desire and curated by David A Bailey at the ICA, the show included queer artists such as Isaac Julien and Lyle Ashton Harris, among others. 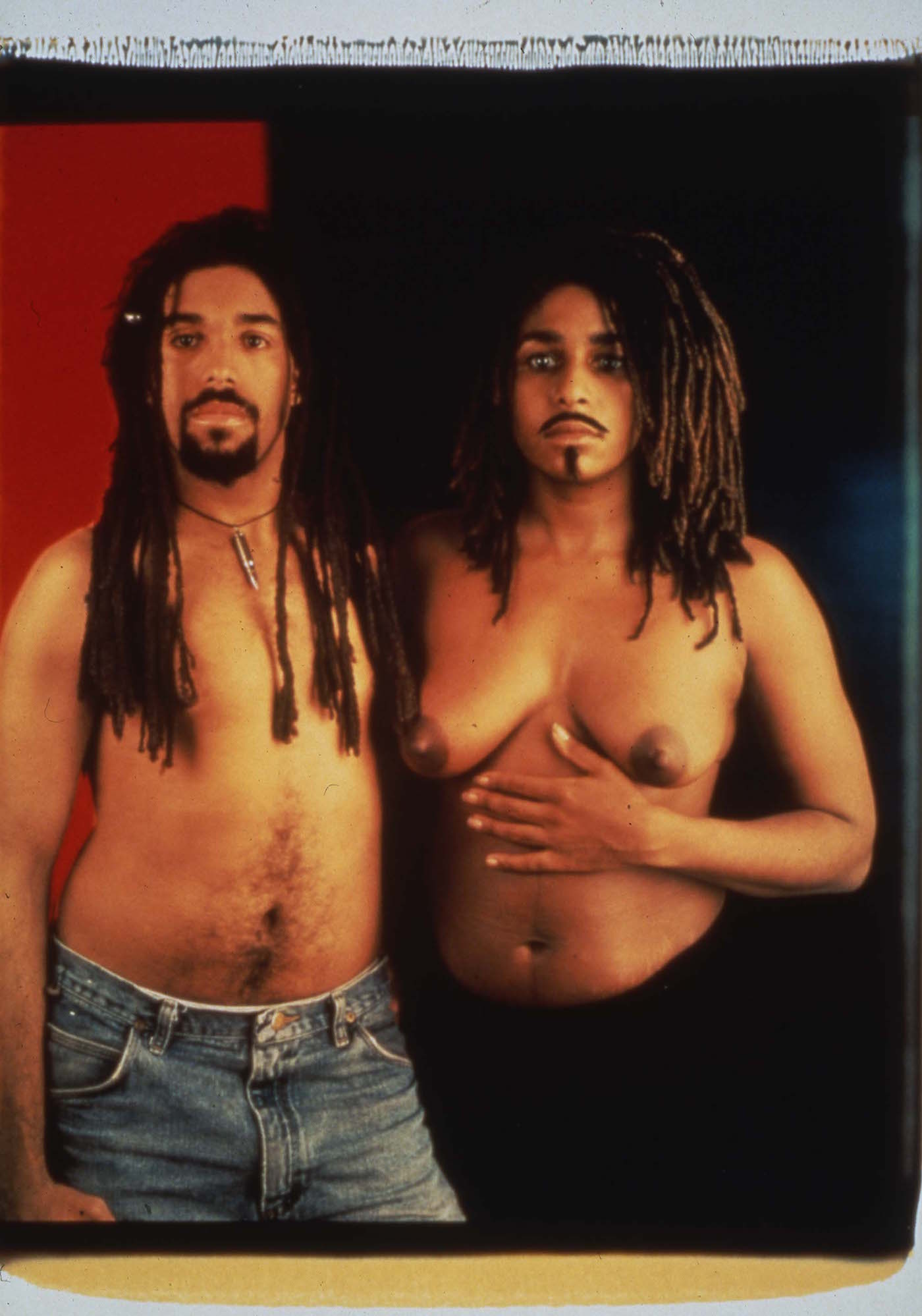 The North American artist Lyle Ashton Harris showed a series of photographs exploring family bonds and homoeroticism through portraiture. Dread and Renee (1994) portrays a topless couple, apparently a man and a woman embracing. Both have deadlocks and realistic facial hair. By showing two Black people in an intimate and homely setting, the picture challenges, if not downright negates, what Fanon suggested about homosexuality only existing as a victim of the slave mentality. Simultaneously it agrees with Fanon’s premise that ultimately we as Black subjects need to self-reflect and self-analyze. Harris’ Brotherhood #3 takes it one step further by showing two naked Black men wearing make-up embracing. Not only are they looking at the camera but they’re also pointing two guns at it, clearly affirming their awareness of being under constant attack and needing to defend themselves, but also reinforcing their agency and refusing to be victims. 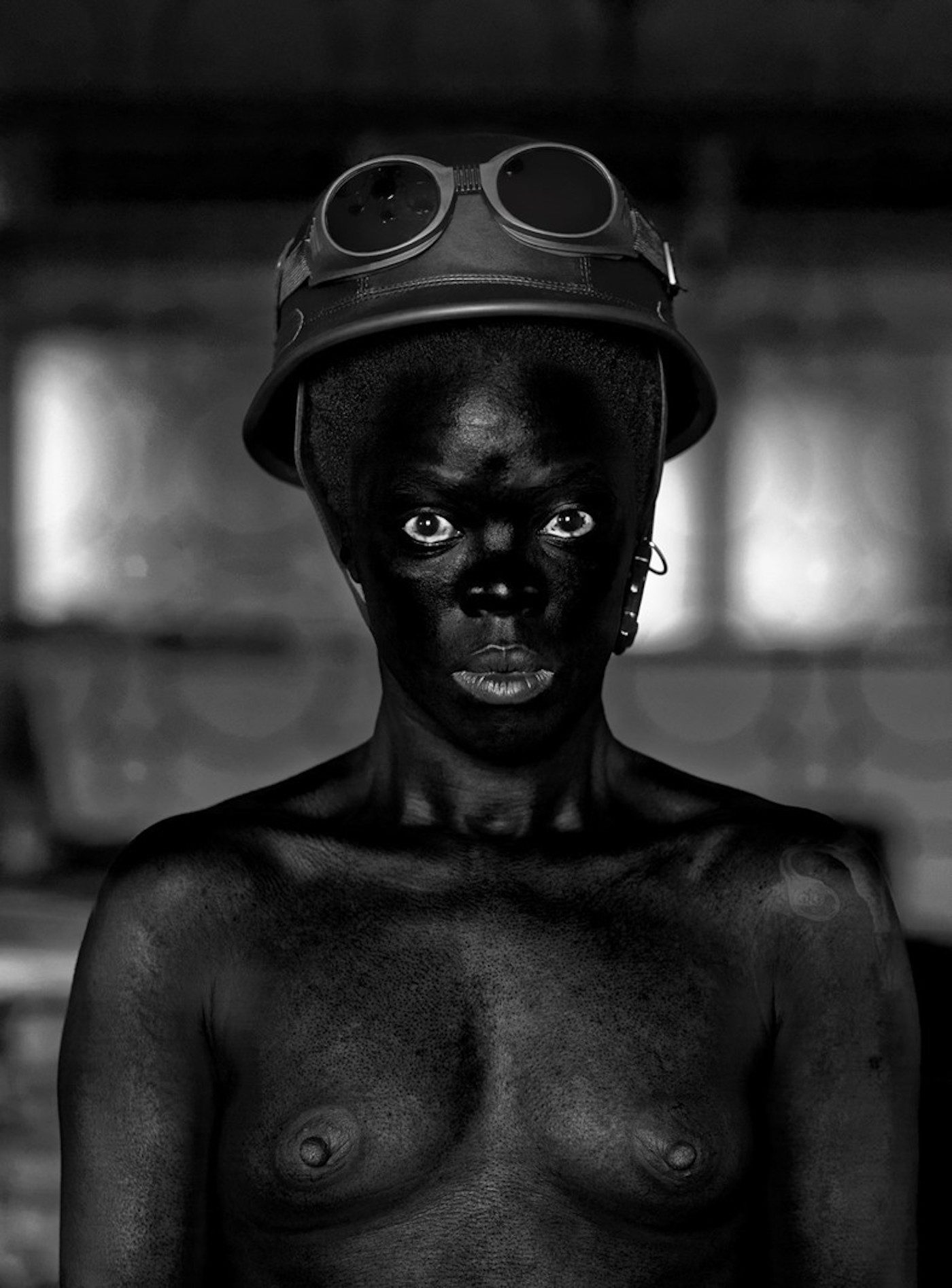 In Zanele Muholi’s 2017 solo show, Somnyama Ngonyama: Hail the Dark Lioness, the South African artist proposed another fierce study of gender, race, ethnicity, and sexuality. This time around, the photographer who has become known for her visual activism documenting queer communities of South Africa, turned the camera on herself. This she argued was needed in order to reconnect to herself again. However, she does it with powerful self-reflection and always giving the camera an intense, fixed look. In addition to the self assured stare, the artist also darkens her skin, highlighting that she knows that she is not only a queer woman but also a Black African woman and that that is how the world sees her or how she wants the world to see her.

In Alain Polo’s Serie blanche (2016), the Congolese artist plays with similar codes but in reverse by bleaching the image of Black naked bodies so that they become ethnically ambiguous. In this way, the artist tries to free the photographed body from a Western gaze that exoticizes it by himself controlling the image (and his own body). Also confronting this very difference that Fanon so emphasized, is Eric Gyamfi. In Just Like Us (2016), the Ghanaian artist documented the daily lives of the heterogeneous queer community in Ghana, forcing us to question what is actually “different”. This approach challenges the heteronormative gaze and the artist takes it one step further by juxtaposing photos with offline and online abusive comments, complicating Fanon’s maximums by emphasizing the importance of how the Black community sees itself regardless of the white gaze. 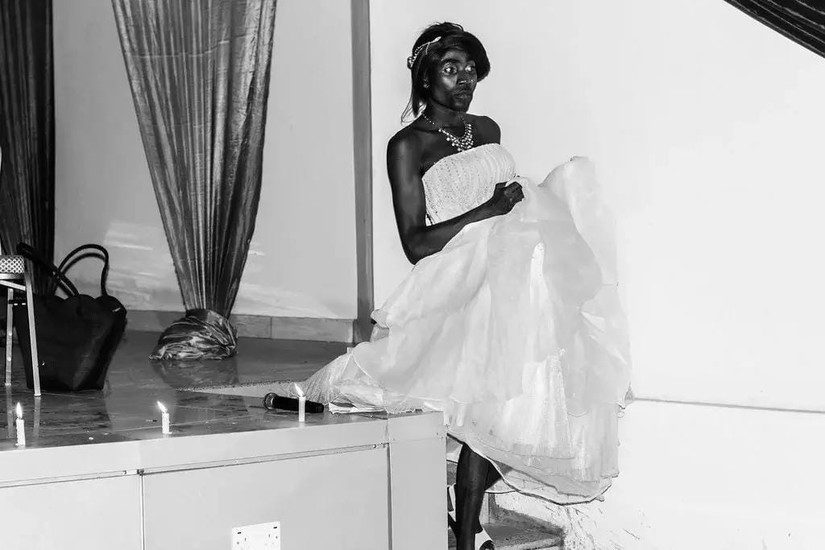 Eric Gyamfi, Untitled, from Just Like Us Series, 2016. Courtesy the artist.

What’s so remarkable about Frantz Fanon’s Black Skin, White Masks is that despite being shortsighted in terms of gender it still remains an enduring tool for Black queer artists. In 1997, Isaac Julien even made a film about the book. The film essay Frantz Fanon: Black Skin White Mask criticizes Fanon as much as it praises him. And perhaps that embodies the biggest gift that Fanon has given Black queer artists – the impetus to question everything, to regard no one as a hero, and, most importantly, to question and place ourselves in relation to the world around us.