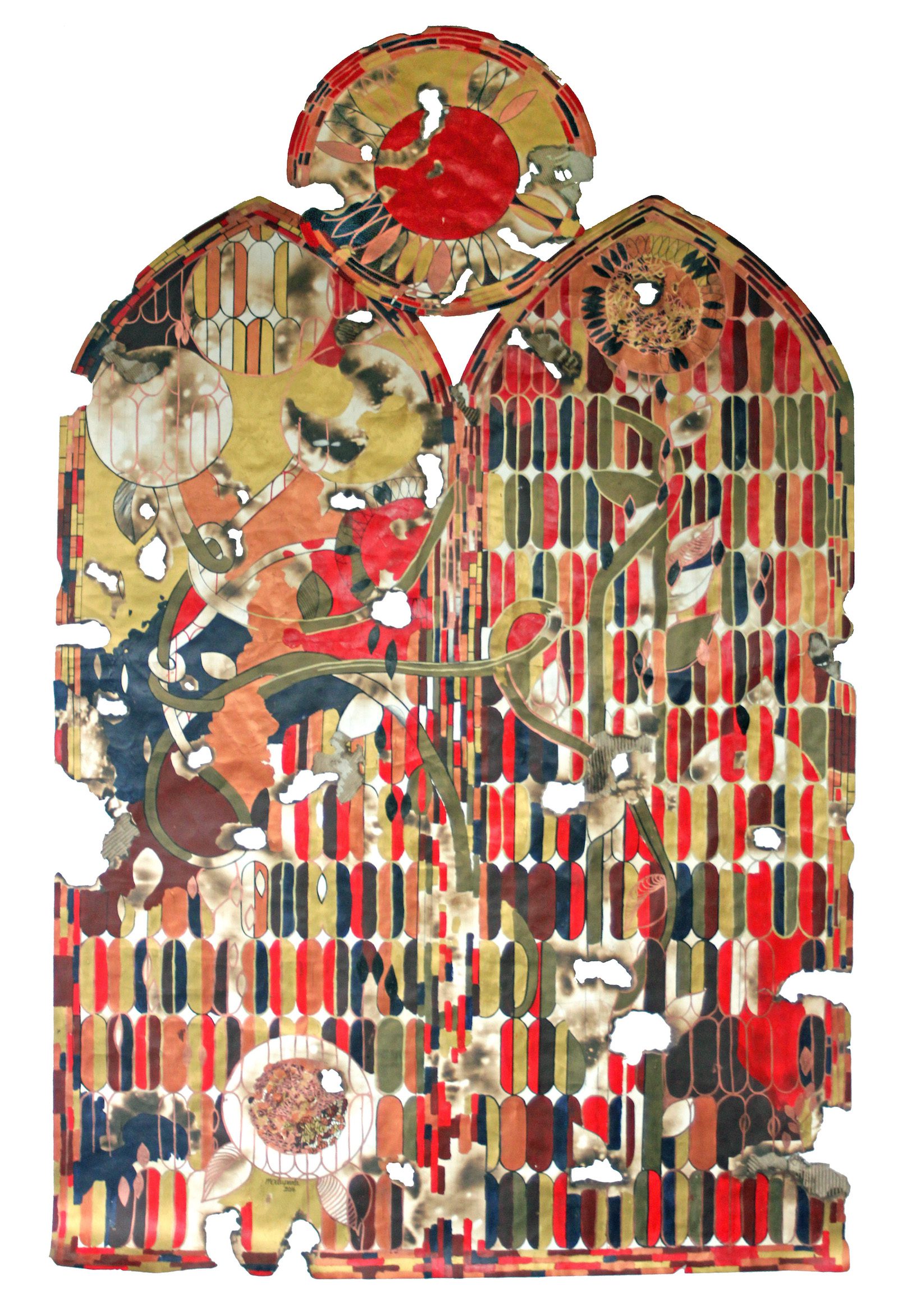 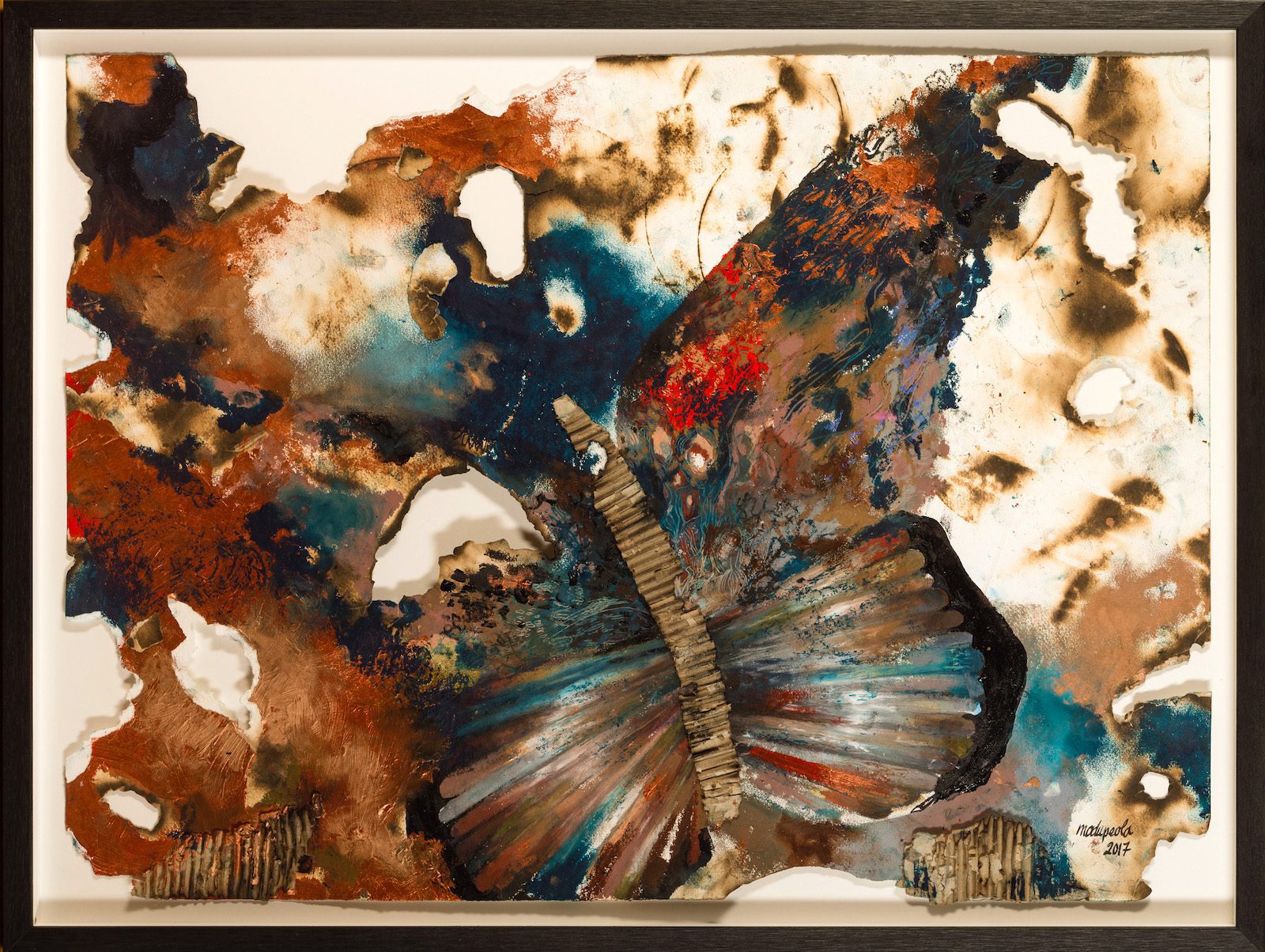 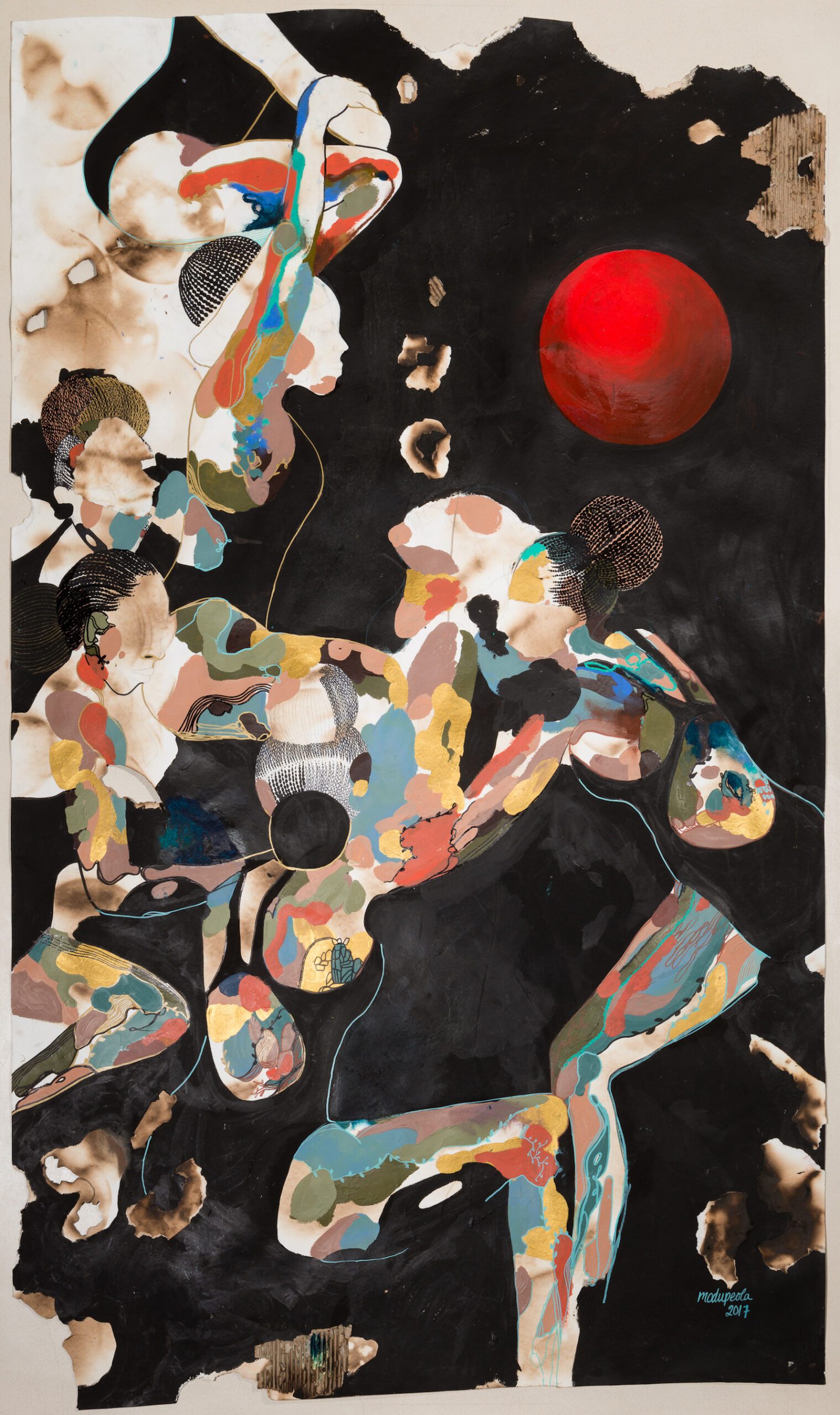 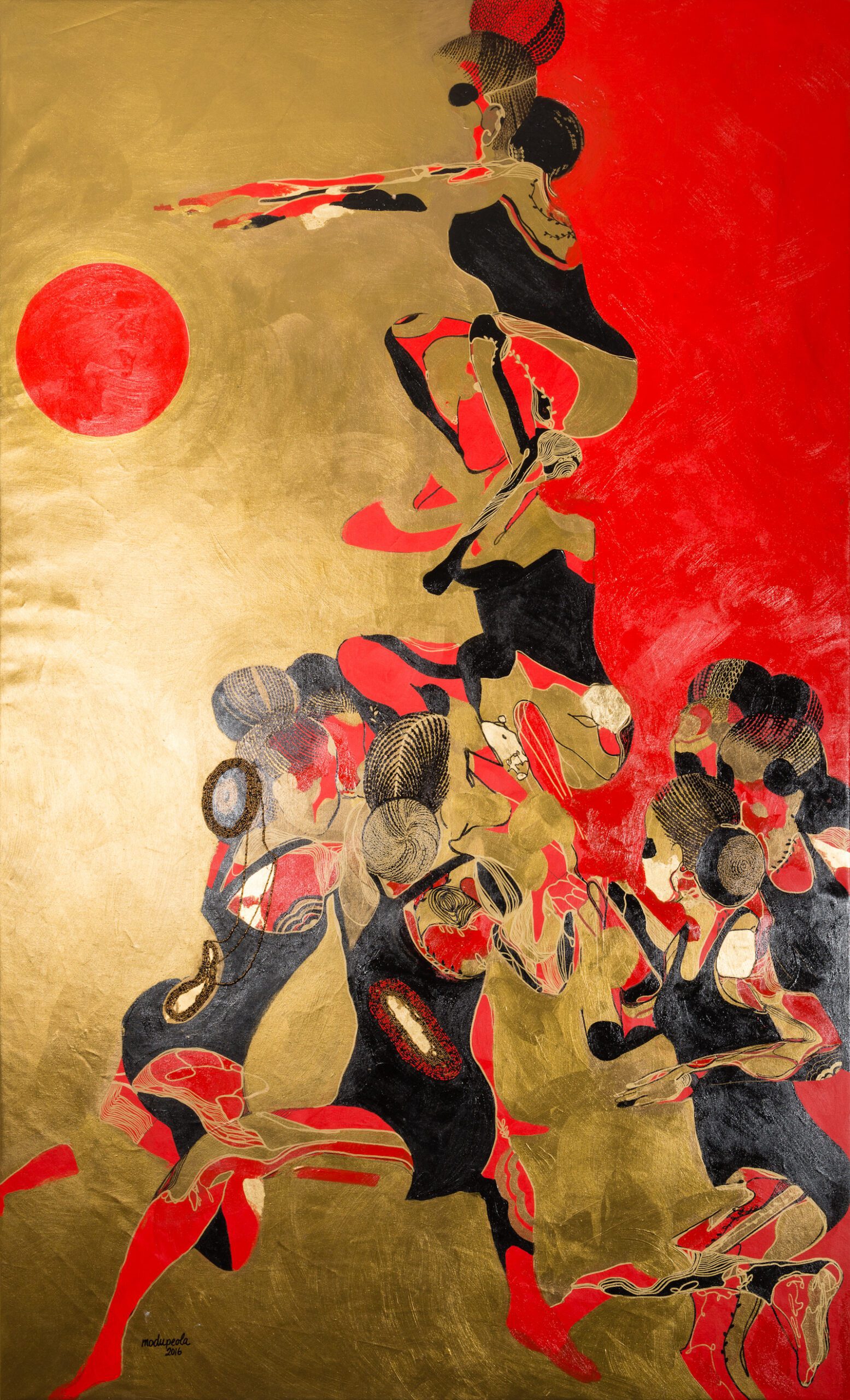 Multimedia artist Modupeola Fadugba talks about her use of symbolic imagery and fragile materials, and the influence her childhood memories had on her body of work

Evelyn Owen: Your series Flowers and Prayers marries large-scale work with the delicate application of acrylic, gold leaf, and ink on burned paper. Stained-glass windows are an important source of reference, as shown by your use of jewel-like colors, the repetition of geometric elements, and sinuous lines. Can you describe your process and techniques?

Modupeola Fadugba: I always do a sketch before I commit it to the real form, making sure that the alignment is mathematically correct. Next, after drawing I burn the paper and then start painting. I am always very careful, you don’t want to overwork the paper because you cannot retrieve burned paper once you’ve painted on it, so there’s a lot of back and forth. I’ve always been fascinated by how stained-glass windows almost have a life of their own. In 2014, I ordered some imitation stained-glass paint to use on thick Perspex, but it didn’t have nearly the same effect or weight as a real stained-glass window. I also wasn’t happy with the colors: they didn’t work with my sensibilities in favor of a muted palette. So I decided to transfer those ideas to a medium that I was more accustomed to: burned paper. I referred to books analyzing various types of stained-glass windows but was never really happy with the idea that I would be borrowing motifs from a certain era without fully understanding the implications for my own work. So I ended up choosing a very plain, repetitive element which almost looks like a pill or a capsule, or a huge coffee bean. The repetitive aspect of painting in these huge lozenges is really therapeutic; the duality of filling in half of the lozenge with color, and finding out what would complement it.

EO: I’m interested in your use of burned paper, which creates scorch marks and holes in the surface of the work. How did you first start to use paper in this way?

MF: When I was in high school in England, I used to try to introduce art into all of my subjects. Once, when I had to do a book report on Jane Austen, I deliberately spilled tea all over the manuscript and then burned it to make it look old. I remembered that technique later and applied it to my work. The first time I ever burned paper in my work was in 2004, when I created the first of the butterfly series called Le Papillon (see cover image). I liked the look of it but I was also trying to recreate an image of a surface that was disturbed; not just old, but also traumatized. Thinking back, the idea of adding holes and trauma marks through burning may have come from images from my time in Rwanda not long after the genocide. Being a child then, it was obviously disturbing for me to see buildings with bullet holes in them. But because it was the aftermath of the war, we didn’t actually see any of the violence taking place. Some of the crumbling buildings full of holes were quite eye-catching, they had something strange and alluring about them. You’d picture what may have happened behind those walls, but it was only in your imagination.

EO: Unlike many stained-glass windows, especially those found in churches, your works avoid providing a clear subject matter or narrative. Can you tell me more about this?

MF: The first image of a stained-glass window I remember was actually from a scarf. My dad used to work in Ethiopia and he would bring back these beautiful scarves with images of a black, Ethiopian Jesus and his disciples on a stained-glass window. But it’s funny because I could never really make the connection that the guy on the scarf was supposed to be Jesus. Because obviously in most other pictures Jesus is not portrayed that way. And I think many people struggle with the idea that the religion they’ve known all of their lives was inherited from elsewhere. There’s a related struggle concerning what certain images represent to people and their faith. In this context, I am actually starting to think about taking people and figures out of the equation in my work because it gets quite messy. The stained-glass works I am showing now have no figures in them. The first two works in Flowers and Prayers have a face and a little girl in them, but those are the ones I don’t intend to let go of because of the personal dimension; it almost seems a little bit too literal.

EO: You have developed a symbolic vocabulary in your work, a central part of which is the red ball or disc that appears in Flowers and Prayers, and also in your earlier swimming-related series Tagged and Synchronised Swimmers. What does this ball signify and how has its importance changed as your practice has developed?

MF: It started out in the Tagged series in 2015, where the red ball, like red stickers placed on sold artworks, symbolizes the idea of art as commerce. It suggests what the value of an artist is, the value of their idea and its execution, and how it is being received by people. But I think now the red circle symbolizes value in the general sense, in a very broad sense. And in the stained-glass works, when you take the red ball out of the context of the swimming pool and put it in the church window, it poses a question. It is not about art as commerce anymore, it is saying, “What is valuable?” and “What is valuable to an individual or to a group of people?”

EO: I’m fascinated by the fact that you studied chemical engineering for your first degree. Is there anything you learnt from this that you now draw on in your practice?

MF: I think chemical engineering is one of the more interdisciplinary engineering subjects because it draws from mathematics, chemistry, biochemistry, physics, and economics. So you’re juggling so many different principles and assumptions and applying them in order to make a particular system work. This idea of systems is something I’m always preoccupied with. In the Synchronised Swimmers series that I’ve recently been working on it’s the idea of individual swimmers coming together to create beautiful structures and systems. In my game installation, The People’s Algorithm, it’s about the individual decisions that people make, but also what choices they’re faced with in the first place. Because it’s one thing to talk about people’s decisions, but you need to know what their choices were to begin with. I’m thinking about how you see people’s individual efforts or non-efforts, as the case may be, and how this shows up on an aggregate or national level.

Modupeola Fadugba (b. 1985 in Lomé, Togo. Lives and works in Abuja, Nigeria) is a multi-media artist working in painting, drawing, and socially-engaged installation. Given her international upbringing and inter-disciplinary academic background, her practice is based at the nexus of science, politics, and art, often addressing play as a form of resistance and tool for change. Fadugba holds a BEng Chemical Engineering / MA Economics (University of Delaware) and MA Education (Harvard University). Recent solo exhibitions include “Prayers, Players & Swimmers” (Cité Internationale des Arts, Paris, 2017) and “Synchronised Swimming & Drowning” (London, 2017). Selected group exhibitions include “Afriques Capitales” (Gare Saint Sauveur, Lille, 2017) and “Dakar Biennale” (Senegal, 2016). Her project “The People’s Algorithm” was awarded a 2016 Dakar Biennale Grand Prize and El Anatsui’s Outstanding Production Prize (2014). She recently presented at TED Lagos and is represented in the collection of the Sindika Dokolo Foundation.

Evelyn Owen is an art writer and curator based between New York City and the UK. She is currently Curatorial Fellow at The Africa Center (NYC). A cultural geographer by training, her research considers the terms of negotiation framing contested geographical imaginations, especially in relation to art from and about Africa and its Diaspora and the respective artists. She received her PhD with a thesis on the geographies of contemporary African art from Queen Mary, University of London.