The passageway is low, oppressive. Uneasily and slowly, visitors shuffle through the metre-long latticed corridor covered in trash and electronic waste. Already the exhibition’s opening work conveys a feeling of discomfort. Los de arriba y los de abajo, the title Kader Attia has given this work complemented by newspaper clippings, is about “the ones on top and the ones at the bottom,” about a horizontal fortress of oppression: in Hebron, on the West Bank, the Jewish residents’ trash regularly hails down on the shops and houses of the Palestinians living below them. Instead of letting this humiliation drive them out of the region, the Palestinians try to protect themselves from the worst rubbish with these mesh wire constructions.

Right at the beginning of the exhibition, Kader Attia makes it clear that he is taking a stance with his show and does not shy away from having a political standpoint. Los de arriba y los de abajo illustrates the ways in which discrimination in the social sphere is visibly reflected, for example in architecture. The concept is reminiscent of the urban building measures executed by the South African apartheid regime, literally cementing its ideology of racial segregation into the cityscapes of Johannesburg or Cape Town. It is not only the relics of specific symbols of power that shape places up to the present day, but – and that is what is frightening – new symbols are constantly emerging, like in Hebron. Kader Attia’s work demonstrates how these colonial structures and practices continue to have an effect. 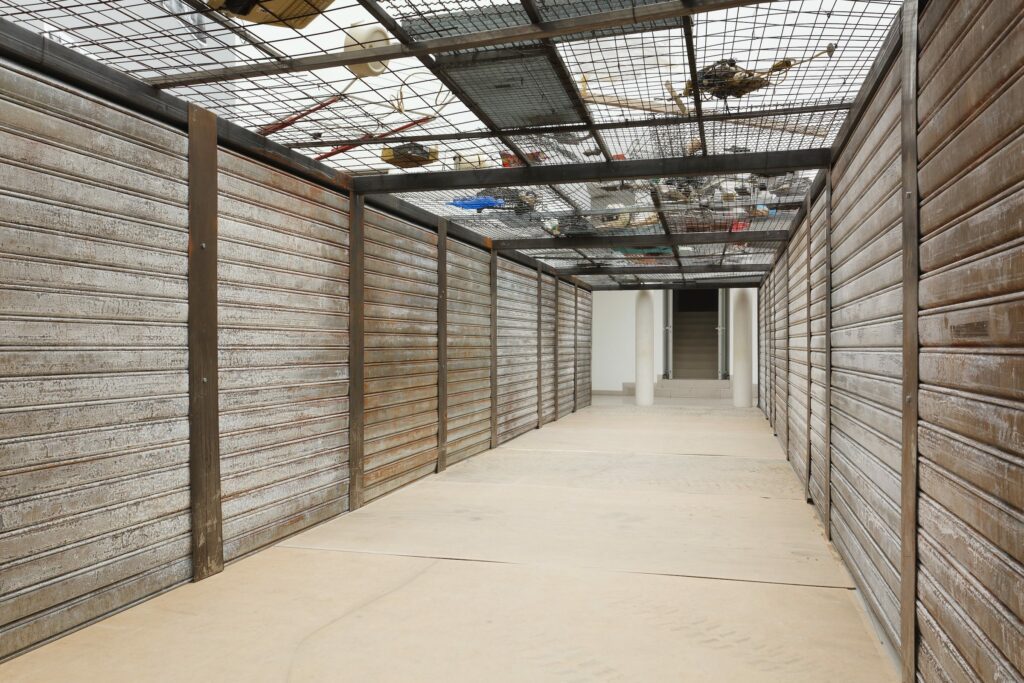 The exhibition Kader Attia – who gained international recognition ever since his appearance with a powerful installation at documenta 13 – presents at MMK Frankfurt is hard to digest. Sacrifice and Harmony examines the mechanisms of discrimination and oppression that in the past as much as today mainly stand for the hegemony of the so-called Western countries. In this context, the principle of “repair” is a recurring theme in his work: there are many events in our history and present – such as the conflict in Israel, but also colonialism or the World Wars – that have caused wounds and trauma, which, according to Kader Attia, need to be repaired.

“Wounds” and “repair” – these are the two central themes of the exhibition. The video installation Reason’s Oxymorons explores the healing of these traumas. In six interviews, the artist talks to psychoanalysts, philosophers, ministers, and healers from diverse cultural environments about events such as the genocide in Ruanda or the Second World War: it is about the traumas that are encoded from one generation to the next and trigger anxieties even in unconcerned descendants. In the interviews, the respondents introduce their different concepts of subjectivity, the subconscious, and the self. They show the heterogeneity of conceptions of the human psyche and the methods of comprehending it – and that there are such diverse approaches to treating emotional wounds. 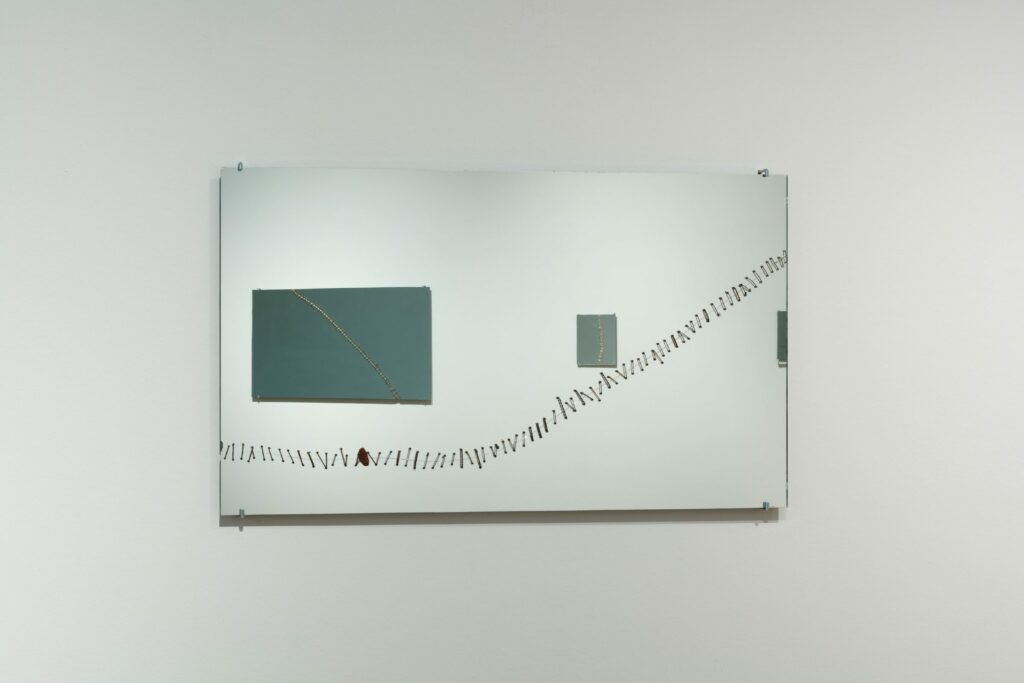 Kader Attia also explains the multifaceted understanding of repair to us with objects. The way in which we repair things would shed light on our approach to our own history. The artist describes how in some cultures the stitches, the patch becomes the central feature of an object: “You cannot think and separate the injury from the repair.” The injury is part of the history, it is memory and obviously encoded in the object.

In contrast, he attributes an ideology of flawlessness to the Western countries. If things are repaired at all, the goal is to not to leave any visible scars and to restore the original state. Indeed, in our everyday life we hardly ever tackle these tasks ourselves but have things repaired or buy something new right away so as to demonstrate our prosperity. Applied to emotional wounds, this means total suppression. Instead of engaging with the unpleasant images of the past, it is common to keep them a secret. For instance the unsatisfied reparations for the long-term effects of the Vietnam War or for the genocide of the Herero by the German colonial power in Namibia are examples for the insufficient processing of one’s own history. However, suppression seems to be less of a Western principle than it is a mechanism of the perpetrators who caused the wounds. 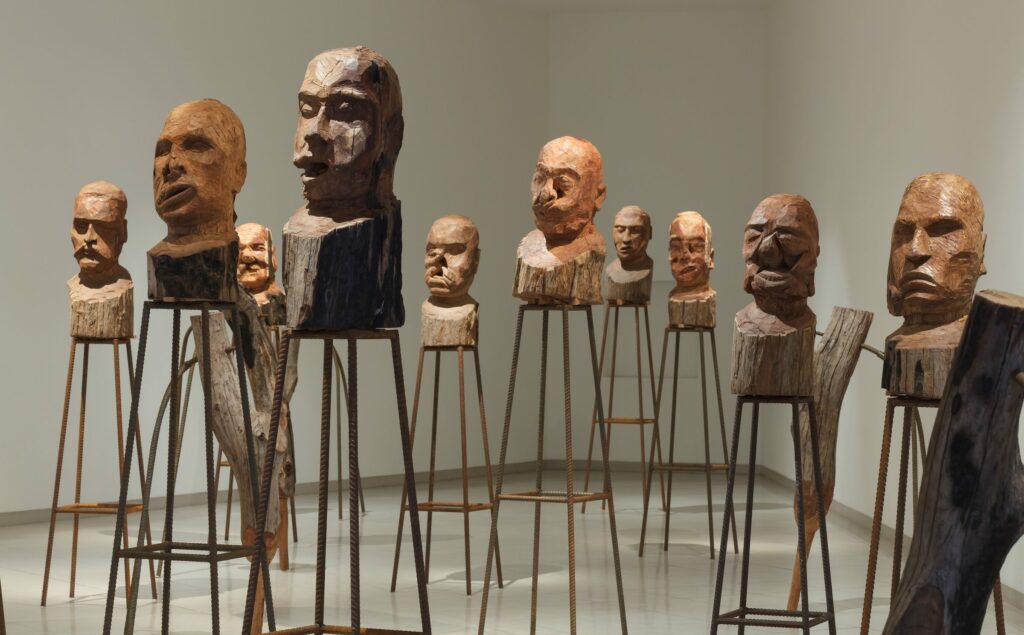 Wounds that have not healed are also the theme of Kader Attia’s monumental wooden busts, which he already presented in the installation The Repair from Occident to Extra-Occidental Cultures at the documenta in 2012 in Kassel. Senegalese whittlers carved the disfigured faces after First World War photographs depicting soldiers with severe facial injuries after having undergone plastic surgery. One of them is missing his cheek and part of his nose, others have deep scars. Attia calls this disturbing installation J’Accuse, and the 18 sculptures are facing the other side of the room, where a sequence of the silent film with the same name is being screened. With his 1938 work, the French filmmaker Abel Gance raised the soldiers maimed by the war from the dead – as a warning reminder. As we know from history, the horrific images were not deterring enough. 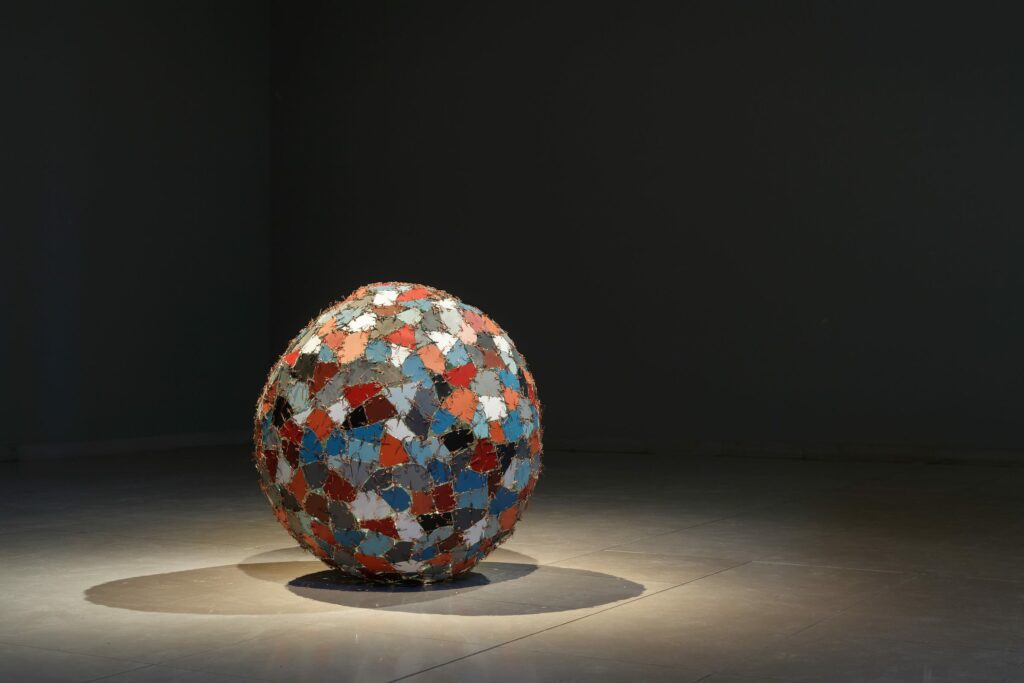 One of the things that triggered Kader Attia’s critical engagement with the “wound” and its “repair” was looking at ethnologic objects that were often regarded as low-quality in museum collections because of being damaged. That these scars and wounds are not flaws that need to be concealed, but important testimonies that actually make a relevant engagement with history possible in the first place, is impressively demonstrated in all of Kader Attia’s work. The work Chaos + Repair = Universe ultimately shows what our global world would look like if the injuries were not largely erased, disguised, and hidden. Like all of the other works in the exhibition, it does not conceal the scratches, the pain, and the traumatic experiences. Rather, the globe is roughly patched up and virtually studded with stitches. However, and that is the serious essence of Sacrifice and Harmony, the stitches hold together what would otherwise fall apart. It may not be comfortable, this scar, but it is significant.

The exhibition, Kader Attia. Sacrifice and Harmony will be on display until 14 August, 2016 at MMK Museum für Moderne Kunst, Domstraße 10, in Frankfurt/Main.