From Missionaries to Artists

The center of this year’s Kampala Art Biennale consists of seven studios where “master artists” set the tone and pace of the show while being assisted by thirty-one young apprentices. And that is exactly what’s systematically wrong with the show, muses C& writer Enos Nyamor: it reveals a detachment from reality, from the concept of open and flexible transmission of knowledge, and from any a true exchange between artists from the continent and the diaspora.

The missionary, the mercenary, and then the anthropologist. All crossed out. Now replaced by the artist. Such are the sentiments that shroud the pervasive and invasive cultural diplomacy witnessed across the African continent. At the time of planning for this year’s Kampala Art Biennale, political conditions in the city might have been less fragile then before, yet the show’s flaw is endogenous. While aiming to revitalize ancient practices and to deconstruct approaches to exhibition making, the biennale implicates itself by its claim of transmission and even charity to young Ugandan, East African, and African artists. 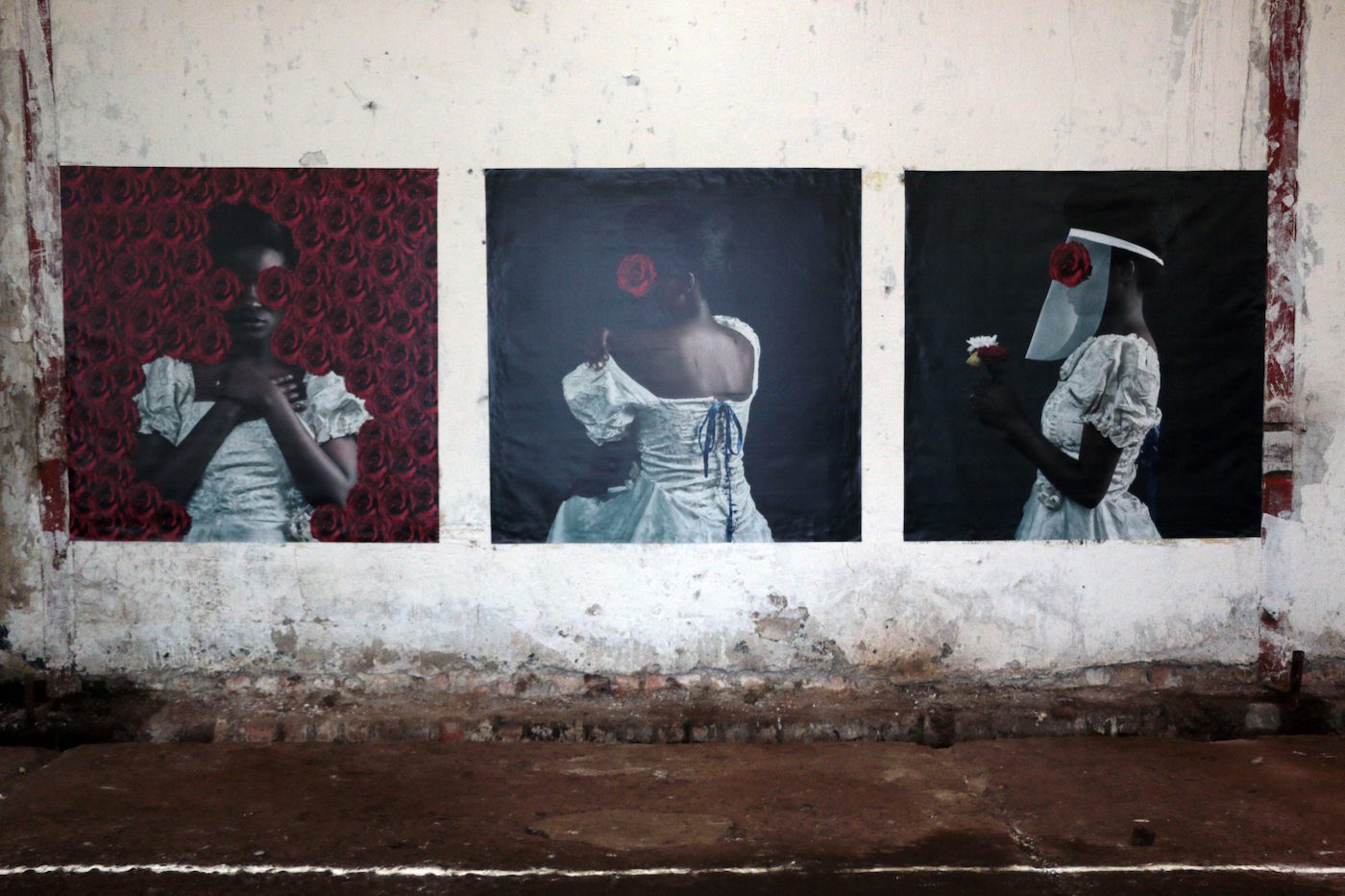 The first hint is the idea of “The Studio,” the title of the biennale and itself a Eurocentric concept. Also the fact that Europe-based curator Simon Njami is the librettist and curator, simultaneously designing the dramatic structure, selecting the characters, and imprinting the scenarios of the biennale – another symptom of European hegemony underneath this year’s concept. The pulse of enthusiasm is the scope of cooperation that brings together the seven selected “master” artists and thirty-one apprentices. Of the thirty-one apprentices, nineteen are Ugandans. The seven masters are Abdoulaye Konate, Radenko Milak, Aida Muluneh, Pascale Marthine Tayou, Bili Bidjocka, Godfried Donkor, and Myriam Mihindou, each an internationally renowned artist.

Unlike the earlier two editions, the 2018 show seems to have accorded the audience an overarching view: the artworks are set within an old, ruined warehouse at the Design Hub in an industrial neighborhood of the city. The overall space is run-down, the floors are irregular and in neglect. But then this location, perhaps chosen from convenience rather than a systematic exploration of potential exhibition spaces, is a way of eschewing traditions of exhibition making. The seven “studios” are arranged in a spiral that emerges from the exhibition lobby, meandering through the warehouse, and, now and then, occupying nooks and crannies. Every studio proposes to inculcate traditions and classical practices that, as Njami asserts in the libretto, “are more than needed in our contemporary world.” 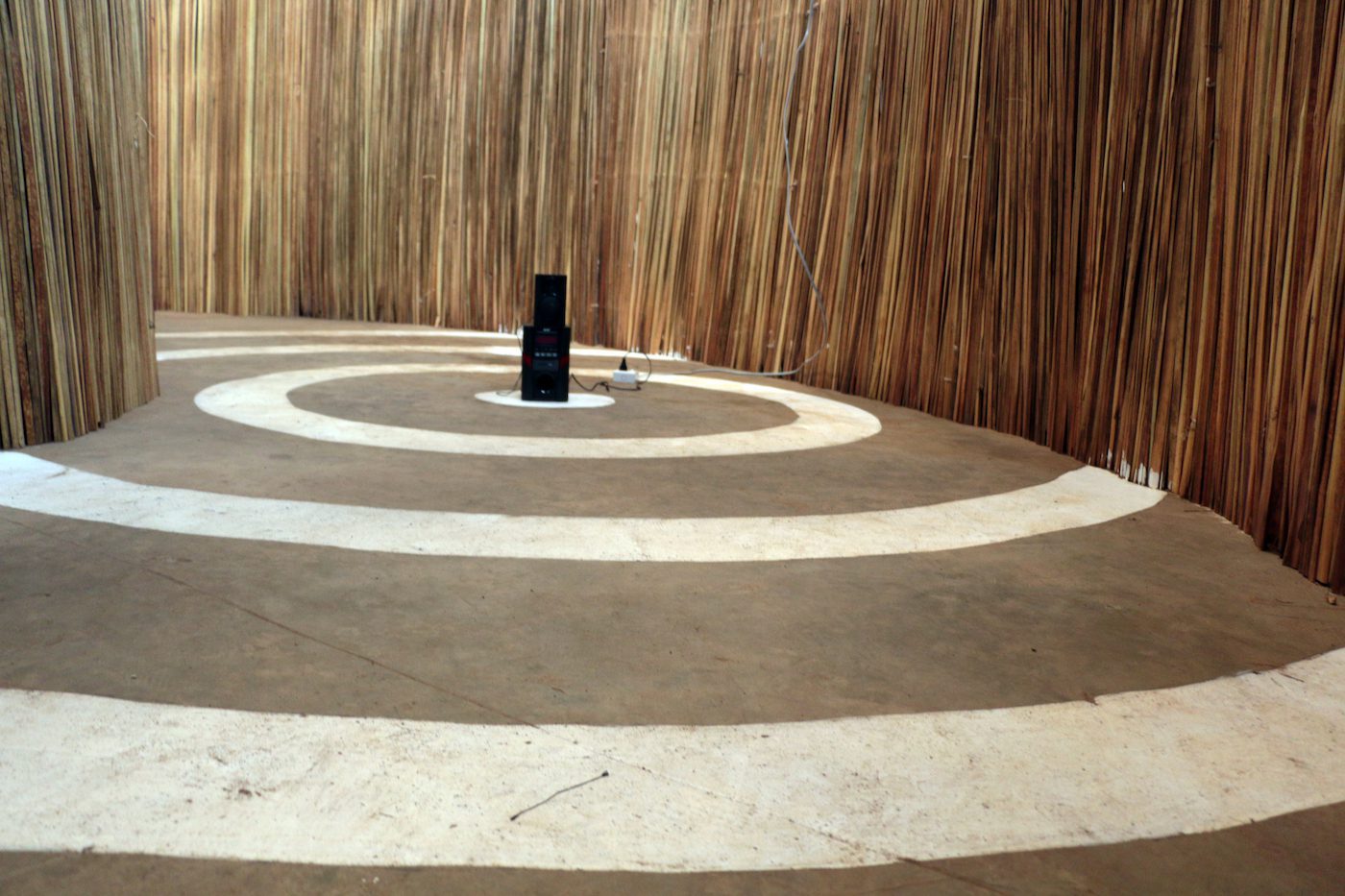 Yet a close examination of the opening studio, “The Library,” oddly juxtaposes a European concept of archiving within an African context. It is an impressive installation chaperoned by Cameroonian artist Bili Bidjocka. Entering the installation concealed with dried bamboo stems, one confronts and even wades through fronds, dangling found objects like used car tires and bottles, and then lands in a cul-de-sac with a floor painted in gold. Each of these layers is a contribution by the apprentices, though without any explicit credit. The experience is reminiscent of wading into a thick forest to end up in a glade.

What makes the concept of the studio, or the master and atelier, to appear strange here is the omission of details and the attempts at cultural appropriation. Traditionally, apprentices begin young, and advance through various stages before ultimately becoming masters themselves. At the biennale, “masters” and “apprentices” have merely worked together for about a month, and the cultural chasms between them are likely wide. All the works are credited to the master, which works toward obliterating the urgency and expression of the emerging artist.

The 2016 Kampala Art Biennale opted for an introspective approach, while focusing on mobility and on public and private spaces within the city. Elise Atangana’s Seven Hills explored intersections between identity and physical and virtual movements. This year’s concern, however, is what interventions internationally acclaimed masters can bring to those in the periphery, as opposed to what one learns and brings to a society. But there are some spectacular and subliminal works, such as Doddridge Busingye’s untitled installation of dirty bedding and knick-knacks, placed within a white coded space referencing the enigma of slums within cities. 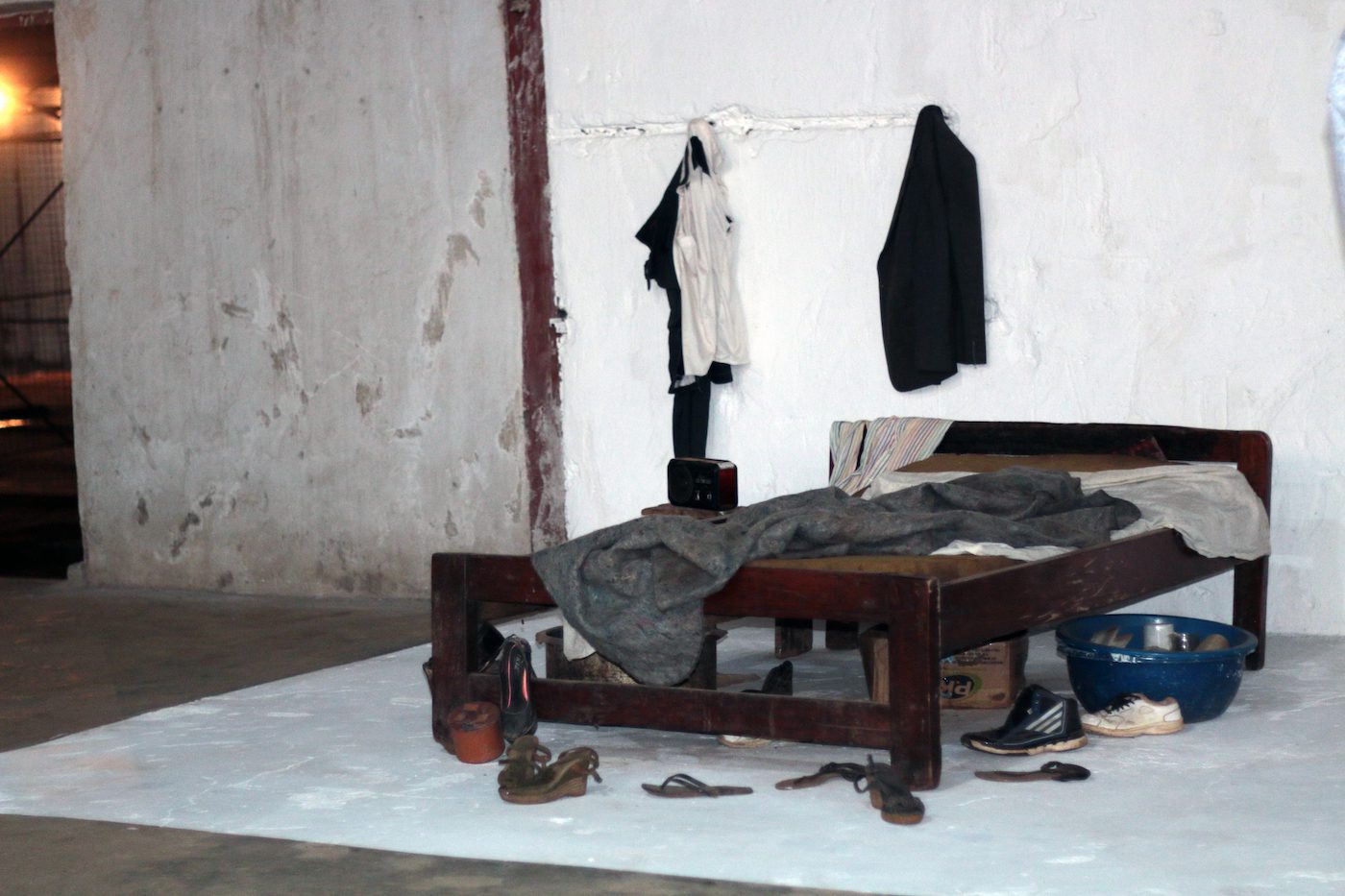 The biennale in the Ugandan capital is, undeniably, overcast by utilitarianism as an agent of neutrality. Njami is a Swiss of Cameroonian descent, and, as such, an outsider. In the context of the volatile political, economic, and social conditions in Kampala today, the show seems detached from such realities, from the dilemmas faced by young Ugandans, which include not only the need for education and mentorship but also the need for economic opportunities. Incredibly, over 700 students graduate annually from fine arts schools across Uganda.

So, despite some works’ obvious power, the ostentatious structure of the show, its erasements, detachment, and appropriations, renders them somewhat flimsy. Moreover, likely because some of these masters permanently reside outside the Africa, their interventions are based on nostalgic memories of the continent. Hence the feeling that the artist is the evolution of the missionary, who preluded and was involved in 500 years of exploitation and colonialism. If Njami developed the biennale with the objective of cultural exchange, then it is succinctly swathed in missionary and altruistic intentions, almost appearing to mistake globalization for universalism. The idea of transmitting knowledge without acknowledging the uniqueness of local conditions is repulsive and insincere. It is as if Njami has played the role of a reactionary in this year’s biennale: aiming to reinvent all that history had demolished and ignoring calls for the decolonization of languages and knowledge.

Enos Nyamor is a cultural journalist based in Nairobi and a student from the C& Critical Writing Workshop which was held in Nairobi in December 2016 and made possible by the support of the Ford Foundation.