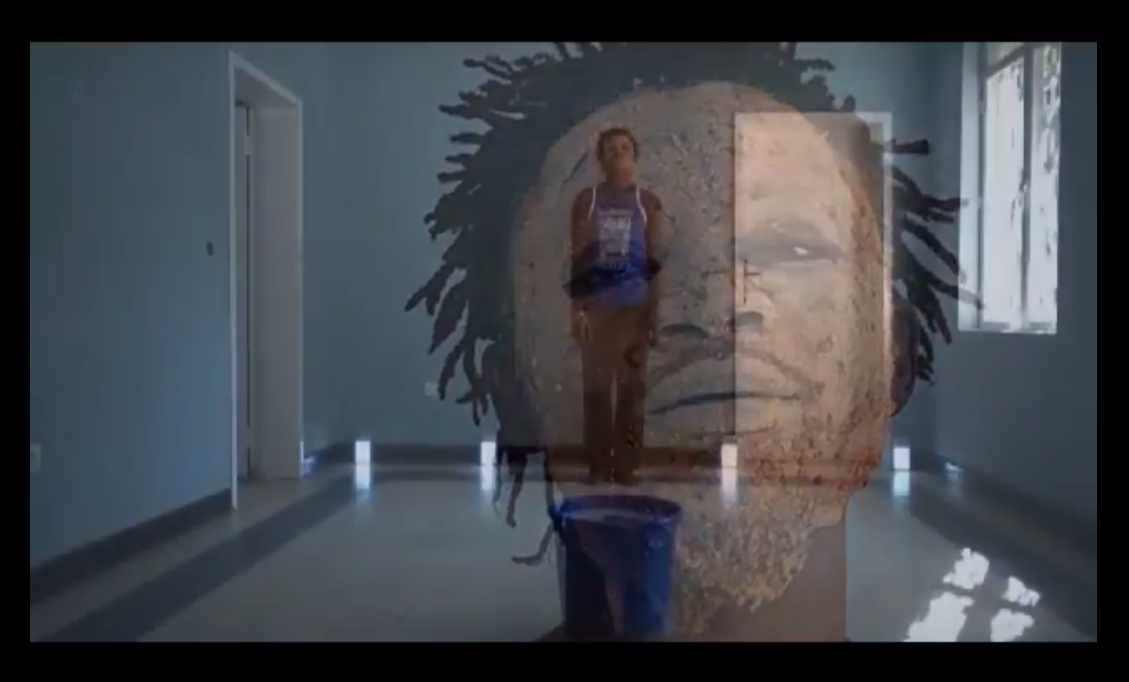 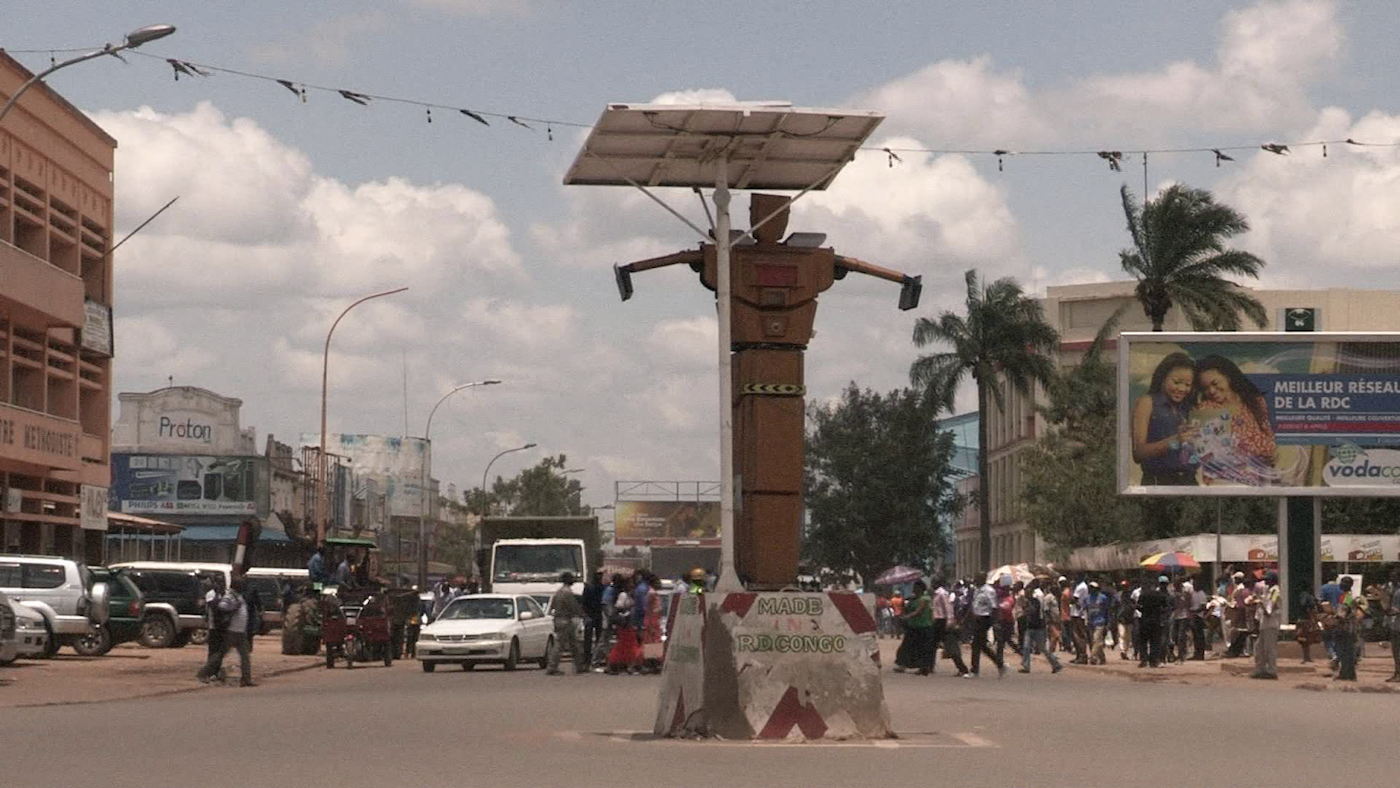 From Experimentation to Video Art in FM Gustave Giresse’s Work

He uses striking images, such as his own face caked in mud and dunked in a bucket full of water or a robot directing traffic. Since Congolese artist Fundi Mwamba (FM) Gustave Giresse has discovered the medium of video, there have been no limitations in his explorations with the camera. He does not shy away from the shocking imagery of physical abnormalities as shown in his recent work “Ubatizo, la genèse du mal”, nor from addressing political topics such as the exploitation of natural resources. C& explains the artist’s evolution from drawing cartoons to directing videos.

In Lubumbashi, a city in the southeast of DR Congo, there is an artistic expertise that is unacknowledged or, as is often the case, not fully appreciated. The work of Fundi Mwamba (FM) Gustave Giresse is an eloquent illustration of this. A passionate story-teller, this young artist launched himself in cartoons and various other media before trying his hand, “in the most unexpected ways, at video and, indirectly, at video art.”[1] Starting from a simple wish to tell stories through performing characters, how can one achieve aesthetic goals shared by other forms of contemporary art?

As “television made by artists,” video art is a discipline capable of mobilizing other perceptual realms, merging the arts in order to give tangible form to the utopian dreams of contemporary art. Thus, the young artist takes advantage of this expertise to consult, establish relationships, ask questions, and initiate dialogues between his work and the public that consumes it. The videos, which each feature a character who performs together with texts—albeit different in terms of the themes they address—that are spoken or mimed by the character, set out to reveal a curiosity, an expertise, the result of a thoughtful analysis of the structures that are specific to video. The stories told here in the form of a previously recorded video evoke Nam June Paik’s (1960) critique of the beginnings of video art and this artistic practice—an enquiry that asked “if electronic technology would revolutionize the practice of contemporary art or if ‘modernist’ art would simply absorb video as another medium for aesthetic reflection.”

In Chronique … (2016)—a video by FM, who appears barefoot with his face caked in mud—we see the protagonist gesticulating as he moves between five lamps and a plastic bucket filled with water. Might this not be a demonstration by the artist of the flexibility and malleability of contemporary arts, to the extent of modelling them on other forms, without necessarily distorting their aesthetic? Following a choreography that takes place in synchrony with the text that he speaks, the character mimes, babbles, and stammers the ills plaguing a world that he portrays as “losing momentum as a consequence of vast quantities of spilt blood.” A world in which people have “their brain where their heart should be, their heart where their ass should be, their ass where their mouth should be, and their balls where their brain should be.” The framing emphasizes the spoken text, action, instances of onomatopoeia, and sound effects. You can even feel the character recommending “being stubborn in the face of the evils of the world, which systematically reduce everyone to zero.” He dunks his masked head in the water in the plastic bucket in order to first remove the mask, which falls from him like a charm, before reaching toward his “illumination”! With this ablution, the protagonist seems to mark the end of a ritual, of a loss from which he emerges toughened, affirming his being with the cry of “I exist.”

This staging with its evident appeal makes a strong impression and bolsters the content, vis-à-vis the form and treatment put forward by the director. Robot (2015), a silent video with a running time of 5 minutes 48 seconds, illustrates this expertise in its own way: it depicts a robot directing traffic, sometimes alone and sometimes alongside a young man expressing himself in sign language. Is it to show the cacophony there would be between these two ways of doing things, one involving a human policing traffic and one that would consist entirely of machines?

The young director’s experiments seek to go beyond any limits by adapting scenes of horror for video. Ubatizo, la genèse du mal (Ubatizo—which means “baptism” in Swahili—the Origin of Evil, 2018) takes as its starting point a fictional story inspired by real events as a means to condemn the irresponsible and far from pragmatic exploitation of mineral resources. Here, FM puts himself on screen—denouncing the messy exploitation of minerals, which, according to him, plunges the village of Bofwa into “monstrification”—to talk about the congenital disabilities that follow on from what he calls the “desecration of the village’s sacred river.” The images of people with deformities shown in the video are shocking. They call into question the practices that are destroying human life. And this is a sizable problem in a country like his that is generally agreed to be a “geological scandal.”

Whatever idea might have been the starting point for producing this work, it is clear that experimenting with artistic practices can be a revelation, showcasing talent and gearing it to new ways of telling stories. Whether moving or static, the shots in this work give it a depth, a dynamism, an energy that packs itself into a “choreography” in order to merge into the settings, through the spoken or mimed texts. A witness to the power that new technologies have to revolutionize the contemporary practice of art.

[1] Remarks recorded by the author during an interview conducted with the artist on May 22, 2018.

Costa Tshinzam is a writer, blogger, and author who is a member of the Habari RDC community. He took part in the C& critical writing workshop generously funded by the Ford Foundation in Lubumbashi, where he lives and works.