Beyond the Magiciens effect

On the Writing of Possible New Futures

Our Author Sophie had a closer look at the symposium-Performance "Au-delà de l'effet-Magiciens".

Although widely criticized for its neo-primitivist epistemology, the exhibition Magiciens de la terre ( Paris, 1989) was still considered the established precursor of the global turn in contemporary art, and was renowned for revealing contemporary African art on an international level (1) by writing a history of dominant art. Proclaimed as the “first global exhibition of world art” by its curator, Jean-Hubert Martin, it ran during the 200th anniversary of the French Revolution alongside events including La mission du Bicentenaire (The Mission of the Bicentennial), a scenic parade of the world’s peoples on the Champs Elysées staged by Jean-Paul Goude (2). Conceived as proof of the universality of artistic creativity, the status of its purported major role in the history of global art is now under discussion again, 26 years later. Following its revival at Centre Pompidou, and a publication (3), le peuple qui manque (a people is missing), (4) a symposium-performance asked what lies Beyond the ‘Magiciens Effect,’ a term coined by Joaquin Barriendos. Taking up Bruno Latour’s postulate that the negotiation will be key to the future of a community, the event’s participants presented a space of frictions. In an academic scenographic structure resembling mise en abîme between universalism, postcolonial theories, and decolonization as a dominant paradigm of global art, the participants examined the choice between an Anthropocene historiography of art or something rather like a palimpsest: What kind of narratives should be invented that will not reproduce essentialisms, asymmetries, or geopolitical hierarchies? 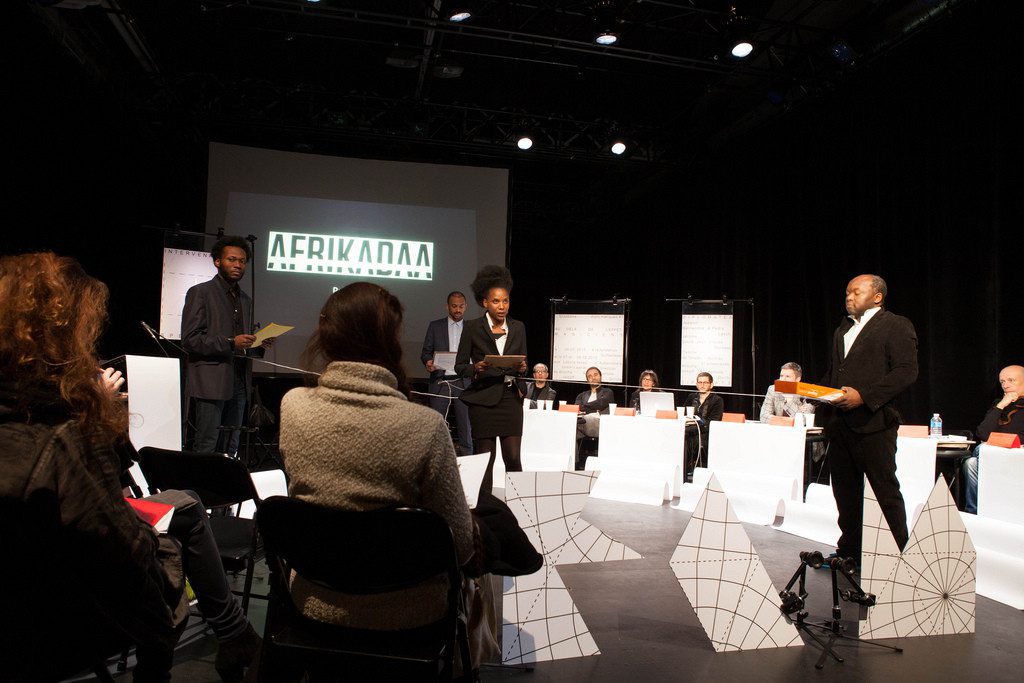 Waves of white paper undulated around platforms and tables on the floor. Organizers and diplomats sat to the right of the keynote speakers, all of them separated from the public by geometric cutouts of the globe simultaneously showing transparent images of meridians and pieces of a colored map of the continents. The question of the historiography of globalization in a non-canonical view of space and time was discussed on the first day of “Testimonies” at the Gulbenkian Foundation in the Invalides district. Barriendos (New York) reflected on the reproduction of asymmetries in the museums and system of global art, showing the ‘magiciens effect’ as a reinforcement of the postcolonial paradox that affirms the globalization of art and the alleged disappearance of the West. In so doing, he was criticizing the approach of the ‘Altermodern’ (a term defined by Nicolas Bourriaud). Vincent Normand (Paris) then remarked on “global contemporary art’s problem with seizing the historic time and operating in it to liberate itself from it.” As a socio-spatial utopia, global art embodies the contradiction inherent in capital’s mediation of its movements. Normand argued for a post-conceptual understanding (Peter Osbourne) of a history of continuities instead of a succession of ruptures. Emmanuelle Chérel (Dakar) advocated a transnational historiography of French art and working on cultural memory outside of museums, as well as reflecting on the relations between art criticism and citizenship in the face of the hazy colonialism of Magiciens de la terre. Meanwhile, John Peffer (Johannesburg) imagined exhibitions as such disappearing from the future historiography of curating. The open-handed gesture offered by Magiciens has collapsed, he argued, and being grateful for it was a waste of time: “That’s why in the future, we forgot about that. In the future, we already done better.” According to Boaventura de Sousa Santos (Coimbra), “the line of the abyss” between “the epistemology of the South” and “the knowledge of the victors” of the North should be recognized so as to move on from the “sociology of absences” to that of “emergence.” Romain Bertrand (Paris) proposed “re-injecting time into places” in the zones defined by the grammar of “European” investments across the centuries. Camille de Toledo (Berlin), speaking as a diplomat-commentator, noted a “synchronicity of the heterogeneous” in the various interventions, a search for common ground, which also highlighted the deeply individual process of hope in relation to the daily process of disappearance.

Inventing “geoaesthetic manifestos,” new maps of art, was the topic of the second day of the event, which was held at the Laboratoires d’Aubervilliers. Among the various speeches was the memorable vision of a “quantum geography of art” proposed by Malick Ndiaye (Dakar). Ndiaye, an art historian, called on the symposium to overcome the “magiciens effect” and not to prioritize global discourse or plurivocal discourses, but instead the scenario of a “connection of isolated discourses.” His approach incorporates the contemporary situation of strong emphasis on experimentation, and of a multidisciplinary approach of new methodologies, strategies, and research theories, of transmission and production of new perceptions and knowledge to meet local needs. Olu Oguibe (Storrs) entirely rejected the magiciens’ effect. He argued that global art is a redundant concept, a notion invented by curators and academics. Instead, art should be seen as a social practice and its role situated outside of theory.

On the last day of “Musée f(r)ictions” the artists took the stage. The public in the stands was presented with a space devoted to the legacies of colonialism as a lived experience. Kapwani Kiwanga (Paris) presented a performance memoir of the Maji Maji uprising in 1905-1907 in Tanzania, The Museum of the Invisible, stimulating ideas about presentation and about intangible transmission of knowledge. Another artist and researcher, Kader Attia (Berlin), considered wounds as a cosmology of cultures beyond the West while Western cultures erase them. Françoise Vergès (Paris) argued for a geoaesthetics of forgotten things without glorifying them, to “fabricate” healing by forgetting, while affirming that the process of decolonization was never completed. The digital magazine Afrikadaa staged a “live editorial act,” Muselons-le  –  Musée-l’on-le, with three actors dressed in black declaiming its program. Tied to each other by a rope, they fought against tropisms for a decolonization of imaginaries, a re-reading of the ghosts of history… and most of all, for continuing the emergence process and for daring to make “speculative museums.” At the height of absurdity, Olivier Marboeuf (Paris) offered a futurist, hilarious version of the famous budget request to the ministry, “the big thing.” The future of liberty and the concept of art in public space was discussed in the monologue of a policeman overwhelmed and delighted by the success of the Institution gazeuse (Hot Air Institution), a place where any event that enrolls gets the blurred legal status of a performance. Whether it was the fictitious Musée de Notre Pays (Museum of Our Country) thought up by an all too familiar Parti des Valeurs Retrouvées (Party of Rediscovered Values) (Vincent Message) or the museums of Gustavo Buntnix, Museotopias; of Cesar Vornejo, Puno Museum of Contemporary Art; Fernando Bryce, Museo Hawaii, and Eder Castillo, The Inflammable Museum (GuggenSITO), experiments and evaluations were the main thing: What should the missions in different national, structural, social and urban spaces be, outside the unadapted or absent cultural policies of the museum of tomorrow?

Continually claiming to bypass the global level for an analysis of the local may be productive, but in Au-delà de l’Effet-Magiciens this approach tended to operate, without being explicitly formulated, with the myth of the origin, where Paris is the source – after modern art – of the global turn of the contemporary art scene. Examining the locality of the symposium-performance itself would have been important. It is hardly trivial to link the past of the Hôtel des Invalides quarter to that of the Laboratoire d’Aubervilliers, which is deeply influenced by the fluctuations of migration and change in France. On the other hand, mounting an exhibition of this kind is symptomatic of the French cultural policy that recaptured multiculturalism debates with an affirmation of the nation, repeated during the Triennale de Paris (2011). (5)

Au-delà de l’Effet-Magiciens is a reminder of the urgency of decolonizing knowledge (Walter Mignolo) and the great effort needed for its audiences for translations and self-reflection on the terrain of theory. (6) Those three days powerfully crystallized and affirmed the will of everybody who spoke to think in terms of the world, and not the globe, beyond all universalist, authoritarian utopias. The call has gone out once again: collectively, and in different ways, to seize the past with both hands to prevent the systems of a history of “victors” from defining our future even more than they already compose our present.

The symposium “Au-delà de l’Effet-Magiciens” took place from February 6-8, 2015, at the Fondation Calouste Gulbenkian in Paris and Les Laboratoires d’Aubervilliers

For the full program visit www.lepeuplequimanque.org

(1) Particularly by Jean Pigozzi’s purchase of African artists’ works. He founded the Contemporary African Art Collection consisting of these acquisitions.

(4) Curatorial platform for art and research set up in 2005 by Kantuta Quirós and Aliocha Imhoff. http://www.lepeuplequimanque.org/

(5) Nicolas Sarkozy was described as its precursor in the catalog of Triennale Magiciens de la terre (Steeds 2013:92).

(6) For a decolonial and/or transdisciplinary approach to history, see also the following conferences: Beyond modernity. Transepochal perspectives on spaces, actors, and structures, Université de Basel, in English:  and Decolonizing Knowledge: Figures, Narratives, and Practices, Free University of Berlin; for another exploration on the scenography of contemporary reflection, see: Artists Organisations International. Initiated by Florian Malzacher, Jonas Staal and Joanna Warsza