In conversation with Samson Kambalu

“For the ranter, the whole world is a playground.”

Massa Lemu: What is a ranter?

Samson Kambalu: A ranter is a sovereign, one who exercises to exorcise. Like a nyau mask (of Malawi) he transgresses and performs quirky acts (rants) in public to express the radical subjectivity with which he regards the world.

ML: How is the old heretical English sect of Ranters significant to your artistic practice? How is ranting specific to your contemporary concerns?

Ranters were fond of performing sovereign acts (rants) in public to express their radical subjectivity and dissent. They said that if there was a god they were god. Subjectivity and sovereignty has interested me since I made the Holy Ball in 2000 as a dissenting Christian, and indeed as an homage to the Gule Wamkulu tradition. In a globalized world, all values – religious, social, economic, cultural – are up for question. I only have my subjectivity to exercise and celebrate.

ML: ‘Holyballism’ is a revolutionary spirituality you founded based on some aspects of Pharaoh Akhenaten’s monotheism, Gule Wamkulu masks of Malawi, Dada and Nietzsche. Is your new identity as a ranter a renunciation of Holyballism? Or is ranting one of Holyballism’s evolutionary stages?

SK: Akhenaten, nyau, the Holyballist, and the ranter are the same thing. They are all sovereigns. I am always on the lookout for sovereigns (in history and all around me), who are not to be confused with the powerful. I am more interested in freedom than politics. There are many ways to exercise and exorcise – critical transgression and ranting are some of them.

ML: Do you see parallels between ranting and other forms of spirituality which have shaped your practice, such as Gule Wamkulu masquerade?

SK: Yes, Gule Wamkulu masks are all about sovereign acts, and so is the ranter, so is the Holyballist. Play is at the heart of it all, and it’s not just about spirituality – this is also in Nietzsche, in Dada – it’s about meaning and a way of being in the world. I think the cultural forms that interest me are all about exercising a radical subjectivity through sovereign acts and the questioning of prevailing ideas about life – in my case, the question of identity and religious, social and economic values in a globalized world. It comes from nyau critical amorality and the Protestant tradition of inquiry and dissent – all inherited from my Chewa and European heritage.

ML: It is interesting to note that your videos are silent, recalling Charlie Chaplin. Though they are called rants, the videos do not feature speech, noise or sound of any kind. So, why rants?

SK: The videos are often site-specific and in my opinion transgressive. For the ranter, the whole world is a playground. Ranting does not necessarily need to use speech, although in my work I have employed many words to exercise and exorcise – i.e., the novels.

ML: Humour – in the form of wit, parody, or slapstick – is a central feature in your work as a device to examine power relations. In fact it is the only constant in your diverse oeuvre which includes video, installation and drawing. How do you situate this element in relation to the rather ‘serious’ themes that you explore such as spirituality, religion and history?

SK: Among the Chewa (my father’s tribe), play, which is to say whatever is done outside the world of work, is the most spiritual and meaningful thing you can do. Gule Wamkulu means ‘the great play’, and this play is not only confined to the masks (which often employ humour, wit, etc.) but extends to art and everyday life, religion and spirituality. For the nyau, as for the Holyballist, play is the very meaning of life.

ML: Lastly, the growth of social network sites on the Internet has seen the proliferation of other forms of ranting on Facebook, YouTube and Twitter. If at all, how is your work related to these new forms of social commentary?

SK: The nyau, ranter or Holyballist is always looking for new arenas (bwalos) to exercise and exorcise. 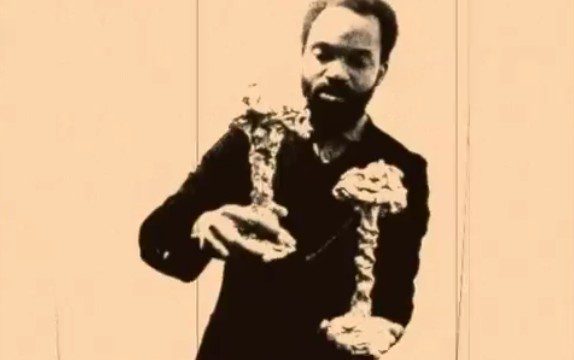 Samson Kambalu has been selected for the International Exhibition Dak’art 2014, www.biennaledakar.org

Massa Lemu is a Malawian writer and artist.