The Mozambican artist spoke to Sean O’Toole about her personal approaches to archives, memory, and the “messiness” within her practice.

The exhibition I, the Archive by Paris-based Mozambican artist Euridice Kala opened in September 2020 at Villa Vassilieff, a cultural space in the heart of Montparnasse. The exhibition was the culmination of Kala’s year-long project investigating the archives of prominent Montparnasse photographer Marc Vaux (1895–1971). Composed of drawings, photographs, collages, light sculptures, sound pieces, and text works, I, the Archive incorporated works from Vaux’s collection, including a portrait of the Black model Aïcha Goblet and sketches of Josephine Baker by Jean de Botton. Additional complexity accrued as Kala contributed supplementary images – her own, as well as images scavenged from the archive of Revue Noire.

Contemporary And: Why did you leave Maputo for Johannesburg when you were 18?

Euridice Kala: I was looking for a way out of the provinciality of Maputo, which is very small. I wanted to get in touch with a more urban, autonomous lifestyle. I spent about five years in Johannesburg, doing this and that, learning English, studying business, before a Mozambican friend, Manu da Silva, told me about the Market Photo Workshop (MPW). He said I should check it out. 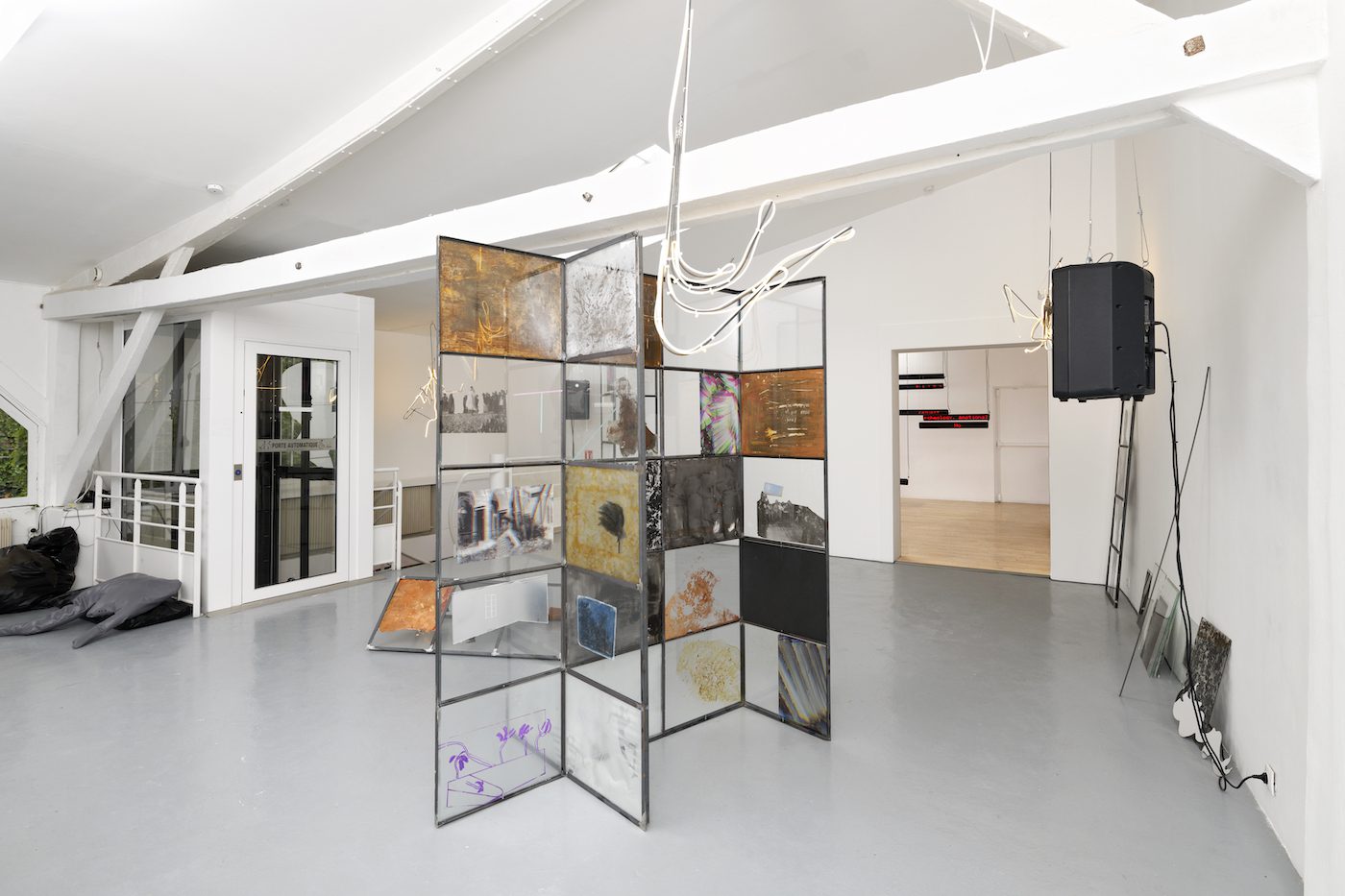 C&: You started at MPW in 2010 and spent two years there. What attracted you to the school? Who were your teachers?

EK: It had a solid pedagogic structure and good programming. I struggled a lot with making photos for the weekly crit sessions and found it much easier to express myself in writing. The idea of making images was really stressful. The teachers I remember are Michelle Loukidis, Buyaphi Mdledle, and John Fleetwood. I also learnt a lot from guest lecturers like Gabi Ngcobo, Tracey Rose, Ruth Sacks, and Laurence Bonvin.

C&: What was it about Tracey Rose that interested you?

EK: I was – and still am – interested in questions around the body. I was dealing with topics like identity, representation, and self-portraiture. It was interesting to see how she dealt with these questions and how it hurt her to produce her works. Her language was so exciting and attractive. It was resolved in ways I didn’t know how to emulate, and it dealt with issues I wasn’t used to. The majority of Mozambicans are Black. Our questions around race and difference tend to be very abstract, whereas in South Africa the conversation is very direct. I think by aligning myself with work by people like Tracey Rose, I was able to deal with my own sense of foreignness. Her work suggested affinities that I could build on, but that I couldn’t just adopt or appropriate. It is a real fight being attracted to something that doesn’t necessarily represent who you are, but kind of has nuances of it.

C&: How did your four years working for the Visual Arts Network of South Africa, a development agency for contemporary art practice, influence your own practice?

EK: I worked with Joseph Gaylard and Molemo Moiloa. Together we developed things that were so exciting. PAN!C, for instance, an exchange platform for African contemporary art spaces that we created in association with Patrick Mudekereza of Centre d’Art Picha in Lubumbashi. Or Boda Boda, a cross-continental video art festival. I started to work in video then, spent a lot of time trying to link up with other institutions and doing research. Many of my art projects are about spending time, thinking and constructing, not necessarily in a theoretical sense but by creating textual presences and thinking with objects.

C&: In 2019, your project Entre-de-Lado appeared in curator Ingrid Masondo’s Not the Usual Suspects, a survey of women MPW graduates shown in Cape Town. Can you speak about this project?

EK: To go back to Tracey Rose, she uses performance to get inside and out of fixed images. To me that is the challenge of photography: to resist how it fixes things or identities in a frame. Entre-de-Lado followed on from a self-portraiture project I started in 2012. It was a continuation of an attempt to move images, but still within a photographic space. The installation included three videos. One showed a performative body weighed down by a white wedding dress. Another listed names of women who were married to postcolonial presidents. These women were part of revolutionary movements but were never really represented, if not completely erased. I am interested in how we treat our postcolonial history, and how this history is transmitted, how women get erased and are made invisible, even though they played important roles. How do we create our own posterity if there are no references, if there is no history recording these names from the past?

C&: The notion of erasure was an important leitmotif in your exhibition at Villa Vassilieff. Was this the first time you had worked with archival photographs?

EK: No. I’ve informally worked with the archive of Mozambican photographer Ricardo Rangel. And in 2015 I initiated a research-based project called Sea (E) scapes that focused on the São José Paquete de Africa, a Portuguese slave ship that sank off the coast of Cape Town in 1794 with 200 slaves aboard. I worked with various museums and archives in Cape Town, including the Iziko Slave Lodge, which holds artefacts discovered at the site where the ship sank. 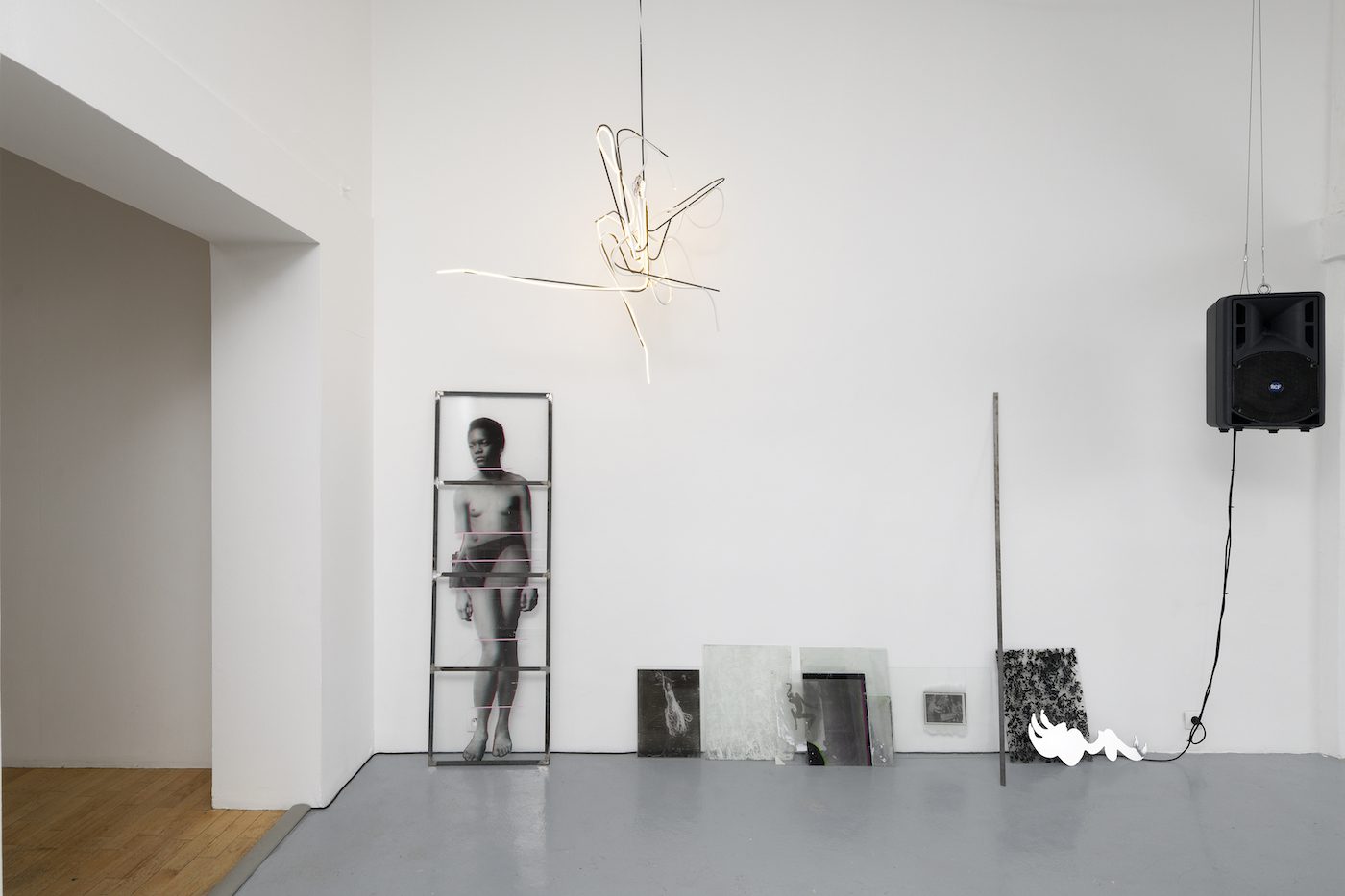 C&: The Villa Vassilieff exhibition included a glass installation featuring a portrait of an unknown nude Black model from the Marc Vaux archive collaged with your own self-portrait. The work materially reminded me of the neat presentation language of Otobong Nkanga.

EK: Her work is meticulous, which is something I don’t think I am. Her lines and language are very clean. I admire and appreciate the cleanliness of Otobong’s work, as well as Kapwani Kiwanga’s, but I personally resonate better with the messiness of Tracey Rose and Dineo Seshee Bopape. I think these artists share something with me; how I build my work using layers and layers. There was a real messiness to my Villa Vassilieff exhibition. The glass works were dirty and included hand-drawn elements. It had so many different material elements. I am interested in how this messiness relates to the idea of multiplicity, of being multiple, of finding multiple ways to speak. I am interested in finding windows, not closed doors.