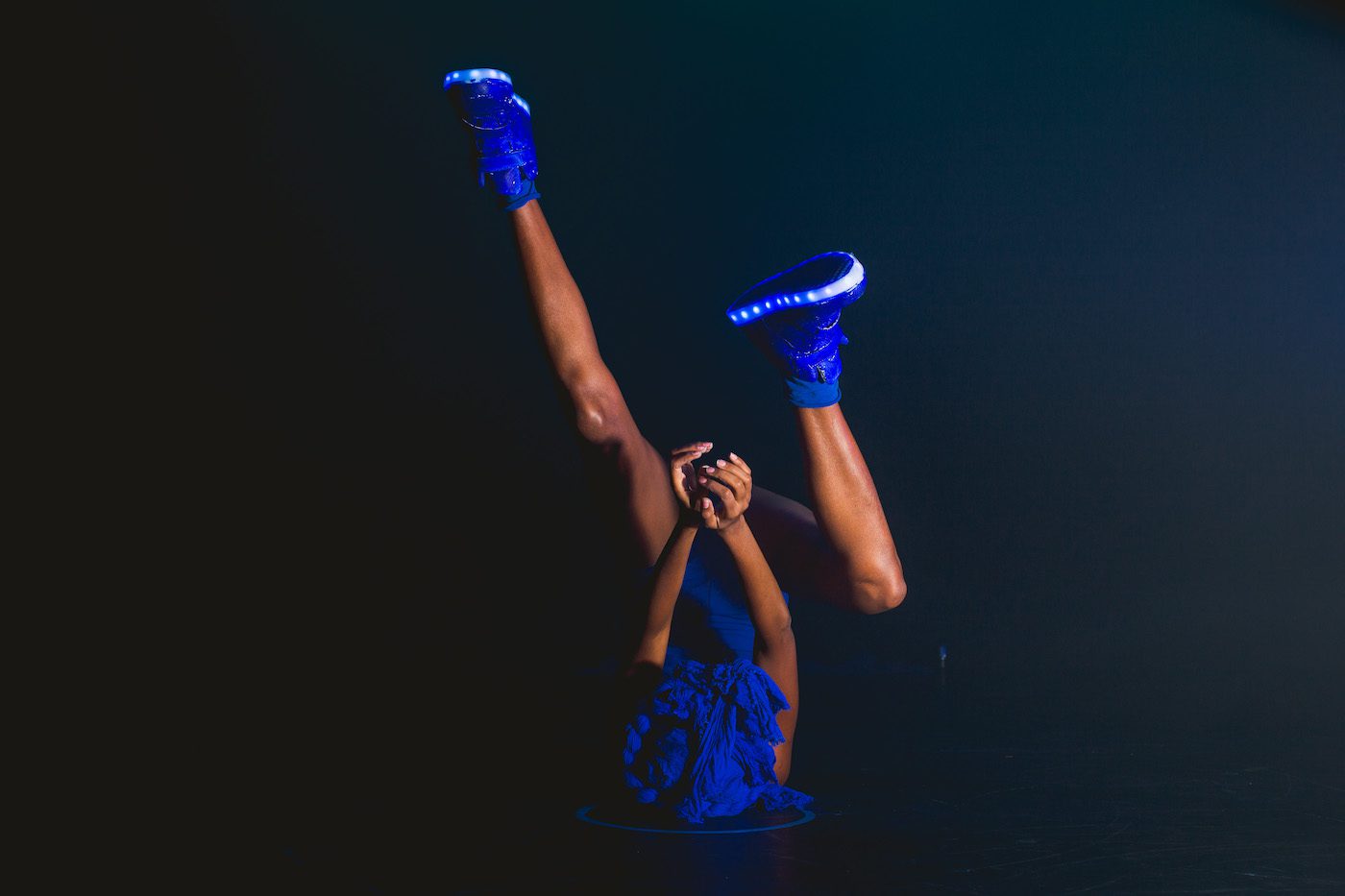 The Future is Feminist

Darkness as a Non-representational Field in Ana Pi’s NoirBLUE

In her performance NoirBLUE at Portugal’s Circular Festival, the artist Ana Pi used dance and UV black light to deconstruct the presence of Blackness and whiteness and how they interact. Ahead of her next performance in Brussels at The Future is Feminist festival on 1 and 2 December 2017, artist Jota Mombaça takes a closer look at how the piece can work as the enactment of another future world.

Ana Pi is a dancer, researcher, choreographer, and imagery artist whose practice gathers embodied traditions of Black Diaspora and contemporary dances of periphery in a movement – simultaneously intimate and multitudinous – towards the invention of transient exercises of freedom; of micro and multiple interruptions in the normalized choreography of captivity and violence. In this sense her work is a study of how to be aware while dancing. Pi’s embodied political philosophy provides us with an entanglement of rhythms, beats, vibrational hips, jumps, quadradinhos and sarradas forged through and beyond the violence of the racial; a sentient archive of gestures committed to a definition of dancing as both an act of struggle and a fugitive strategy.

The dedication to the movements #BlackLivesMatter and #JovemNegroVivo does not operate solely as a promotion of the cause. NoirBLUE seems to arise from some sort of chronological crossroads, both as the re-enactment of something and as an anticipatory envisioning. Its derivative relation to memory and time, and the commitment to the continued struggle for Black life to matter, intervene in Pi’s speculative dance with an ethical program definitely rooted in a certain form of futurity – a strategic time frame that operates within the present and toward the future through a poetical reading of the world, its fucked-up relations and its radical breaches.

At a certain point of the piece, Pi proposes to play a game with the audience (it is important to register that by “the audience” I am referring to a mostly white European one). She brings to the front stage a bunch of small white sticky labels, and the audience is invited to come up with categories of blue: “navy blue, light blue, cobalt blue.” Pi sets the rules and then the game begins. While the voices from the audience offer more and more categories of blue and Pi attaches the labels to her body, she keeps playing with the words, faking (and making) misunderstanding. However, what wraps the audience into the tricky game of categorization is their own normative impulse to naturalize the reproduction of a color line.

When almost all the labels are finally stuck to her body, Pi stops the vocal dialogue with the audience and runs into the shadows of her stage, dancing resolutely while the lights turn black. By making the white labels hyper-visible, the black light functions as an efficient device for de-materializing Blackness as an object of the white colonial gaze while marking the white as an object of its own subjection. It is when the Black body disappears in the fluorescent atmosphere of black light that it accomplishes its most powerful form of critique, challenging the very notion of materiality that (re)produces whiteness as the sole form of presence. Thus when the lights are black, the Black body can break its containment towards a radically other form of presence: becoming darkness itself.

NoirBLUE’s lighting composition is a collaboration between Ana Pi and Jean-Marc Ségalen and it is crucial to the piece, especially because of its relation with shadow, darkness, black light and smoke. Visibility here is never confounded with transparency. Rather, it is replaced and repositioned according to a visual project that presents darkness as a non-representational field, where there is no normative gaze to seize bodies as objects. If NoirBLUE is about Black visibility – and it is, as is this text, both of them inscribed in a world that invisibilizes us as subjects and creators by marking us as hyper-visible objects and themes – it is in as much as Black visibility defies the normative field of visibility and conjures up a sensitive apparatus that allows us to see through, think within, and live beyond the dark.

Here we see with the ears; the feet speculate; we think with the hips; and the skin is a radar and a spiritual locus. In this process, the music traverses the senses, meanings, and cognition itself, as a force that moves everything in the room, from Pi’s body to the ingrained motion of the audience’s body and of all the things that are present, vibrating. Ana Pi has invited Jideh High Elements to create the soundscape, and his tracks are at the same time sonic compositions deeply rooted in Black electronic tradition and escape routes for Pi’s ancient gestures of Black futurity.

All these elements compose an atmosphere that feels like it should be read not as a spectacle but as the enactment of another world. “Which world?” the reader may ask. But the beautiful thing about NoirBLUE is precisely its capacity to enact something without rendering it completely visible. To create this imaginary force that – in view of the world as we know it (the world of racial capitalism) and its extracting apparatuses – refuses visibility as transparency, is a form of self-preservation for Black lives and the Black speculative project. If in the middle of the piece police emergency lights illuminate Pi’s body, it is because from the position of the Black subject we are not yet free in this world; but if Pi continues dancing after that, it is because from that same position we carry a world that is worth fighting for.

Jota Mombaça is a non-binary bicha, born and raised in the northeast of Brazil, who writes, performs and academically studies on the relations between monstruosity and humanity, kuir studies, de-colonial turns, political intersectionality, anti-colonial justice, redistribution of violence, visionary fictions, the end of the world and tensions among ethics, aesthetics, art and politics in the knowledge productions of the global south-of-the-south. Current works are the collaboration with Oficina de Imaginação Política (São Paulo) and the artistic residency along with Capacete’s 2017 at Documenta (Athens/Kassel).