Creative Unions in the Global South

C& talks to Patrick Mudekereza of Picha and Ade Darmawan of ruangrupa.

Ade Darmawan of ruangrupa arts initiative in Jakarta and Patrick Mudekereza of the Lubumbashi-based art organization Picha are both members of Arts Collaboratory. The platform combines over 20 international art organizations from Africa, Asia, Latin America, and the Middle East. Darmawan and Mudekereza explain the reasons for participating and how they experience differences as well as similarities while working together.

C&: Please tell us about the visions, goals, and practices of your respective arts projects.

Patrick Mudekereza: Picha is a project involving a voluntary group of local artists and cultural activists to communicate with the world about their society, in their own words. This twofold mission has resulted in the creation of a biennale (Rencontres Picha, Biennale de Lubumbashi, 4th edition in October 2015), and an arts center (opened in 2012). We work just as much with local artists as with international one. The most important thing for us is the possibility of stimulating a critical conversation with the Lushois (the inhabitants of Lubumbashi) about their city, history, and socio-economic environment. We see art as a good starting point for this conversation.

The Picha project revolves around two strands that we are following jointly with our South African partner, the Visual Arts Network of South Africa. The actions take place in a specific way in each of the contexts, but we have exchanges around methodologies and research that are more global. The Revolution Room project is the idea of public space and archives working around the communities of Lubumbashi, Fungurume, and Moba, for the DRC strand. Three artists, Jean Katambayi, Patrick Kalala, and Agxon Kakusa – one from each of the cities – explore their history and its sometimes contradictory dynamics. The second strand of our exchanges is a platform of low-cost exchange with other independent art centers under the auspices of the Pan African Network of Independent Contemporaneity, known by the acronym PANIC.

Revolution Room project, the community fro Cité Gécamines choosing objects in the Lubumbashi Museum collection for an exhibition in their neighborhood, 2014. Courtesy of Picha

Ade Darmawan: ruangrupa was established in 2000 by a group of artists in Jakarta. It is a non-profit organization that strives to support the progress of contemporary art within the urban context, by means of exhibitions, festivals, art labs, workshops, research, and journal publication. Furthermore ruangrupa is prompting visual culture and media artwork that is critical to urban surroundings. In the setting of urban society the organization emphasizes providing a space for video and new media works, a platform for the merging of culture and technology and its relation to society.

We try to address larger crowds through an ArtLab that serves as a collaborative platform for artists and interdisciplinary groups from Indonesia and abroad. The focus is on mobility and collaborators do collective research. They work together to produce artworks in various media, creating interventions as well as interactions with the public. 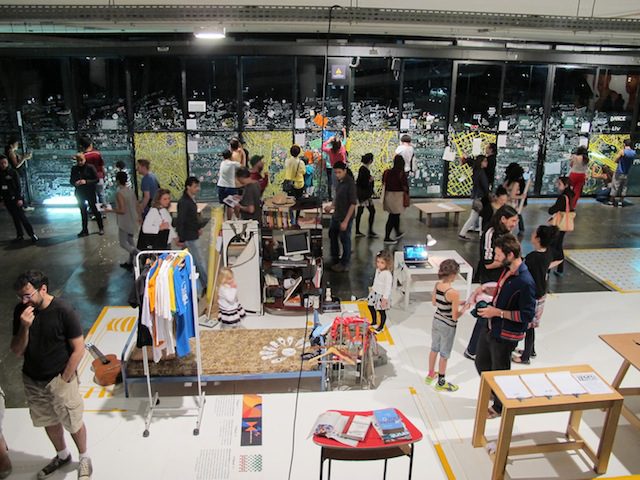 C&: Both of your art spaces are part of Arts Collaboratory. How did this network come about and what are its main goals?

PM: Arts Collaboratory emerged from the desire to set up exchanges among three Dutch donors (Hivos, Doen, and Mondriaan – the latter of whom has since retired) who wanted to collaborate in supporting initiatives from the South organized by the artists. Starting as a network of beneficiaries of the same donor, it transformed gradually into a community of initiatives sharing the same common values and exchanging their ideas and know-how; attempting to encourage ways of looking at artistic creation, first for themselves and then for other existing platforms.

AD: Within the context of developing networks, we had some things in common: social problems, poor economic means, a lack of infrastructure, and unstable political circumstances. The network is the result of our redoubled efforts to tackle these issues, to find methods of exchange, and to share knowledge and experiences. We also hope the platform will generate other methods and approaches that could enrich our practice locally.

C&: How do you navigate within this system of exchange?

PM: I must admit it’s not simple. We have an annual meeting in one country that enables us to meet in person and get a better understanding of the reality of a different cultural scene to our own. The contexts are very varied. In addition to the burden of history and the socio-economic context we don’t have the same notion of organization, and one civil society doesn’t function like another. But this diversity is part of the richness of a network.

Meeting the independent artistic scene in Colombia, with its social commitment and its way of dealing with the legitimating authority of the North and doing a lot with a little, has been a very enriching experience for me. Similarly, the horizontality of Indonesian structures can open up questions on our initiatives in Africa. The challenge we still face is to have exchanges with real content and concrete projects. That’s what we are working on now in three ways: Minga-Utopia (on the concept of utopia), Arts Schoolaboratory (alternative education that reopens the question of the whole notion of hierarchy) and a festival of video art.

C&: What does collaborative practice mean to you?

AD: Collaborative practice is about sharing knowledge, experiences, power, and control. Giving a chance to nourishing ideas and practices among different kind of persons and organizations. In the context of Indonesian contemporary arts, collaborative practice is also a survival mechanism. It allows independent art organizations to find a formula to produce and promote alternative art works.

PM: There was a time when I thought about collaborative practices in terms of drinking beer together and changing the world over the course of a conversation. Nowadays I think more about the need to find ideological intersections. To turn conviction (drinking beer) into actions (putting on an exhibition, publishing a book), you have to share what Elvira Dyangani Ose, borrowing from J.F. Lyotard, calls “enthusiasm.” That’s what “collaborative practice” means to me.

C&: Could you tell us a bit more about your approach to experimental art education? How does it translate into your work?

AD: Art education in Indonesia has always been experimental. We never had a proper system, one that compares to Western or East Asian countries like Japan or South Korea. There is no real arts canon in Indonesia, no museums, established galleries, or other organizations that would have influenced contemporary art on a grand scale.  All that has led to chaotic conditions, which had to be faced by the students. ruangrupa has created several programs that are trying to fill the gap left by the authorities. One example is our Art Critique and Curator Workshop that is being held every year.

PM: I also think artistic education can’t be anything but experimental, especially in contexts like ours. In the Congo, nine out of ten professors got their doctoral degrees in Europe, mainly in Belgium. This extraversion of the production of thought doesn’t provide the necessary sensitivity. We have to find ways.

C&: In the art world, there are more and more palpable South-South connections. Why do think that is?

AD: For several reasons. Perhaps most importantly: it’s a matter of issues. It is very possible to find similar problems in more than one of the Southern countries. More often than not this creates immediate empathy and a dialogue about the various experiences.

PM: Suddenly, mutual comprehension has become easier and people have a common desire to think for themselves without the need to legitimate their ideas and their aesthetics using the history of Western art, which sometimes has the pretension of being globally valid.

C&: If you had the opportunity to draw an imaginary map representing the South-South links, what would it look like?

PM: With PANIC, we made a map of Africa and the exchanges between independent spaces. Unfortunately we slipped the financing parameter in. This resulted in lots of arrows pointing northwards. That’s the sad reality. It’s also political. We’re going to rethink that map. It would be better if it were more “imaginary.” That would be more useful than to stop at this conclusion.