Creation as a Collective Process

Minga Prácticas De-coloniales (Minga Decolonial Practices) is an interdisciplinary collective that wants to express the sentiments of indigenous communities to recover ethnic and cultural memories. C&AL spoke with the members about their work, social protest and the resignification of monuments in Colombia.

The collective has worked together with other communities in the Colombian Cauca region, in order to exchange ancestral knowledge and give expression to the sentiments, interests and concerns of the indigenous people in the territory. The collective’s decolonial work is a recovery of a “collective fabric” rather than an individual work, and the approach to creation thus withdraws from the traditional logics of art and the Western colonial order. C&AL had a chat with the members of the collective. 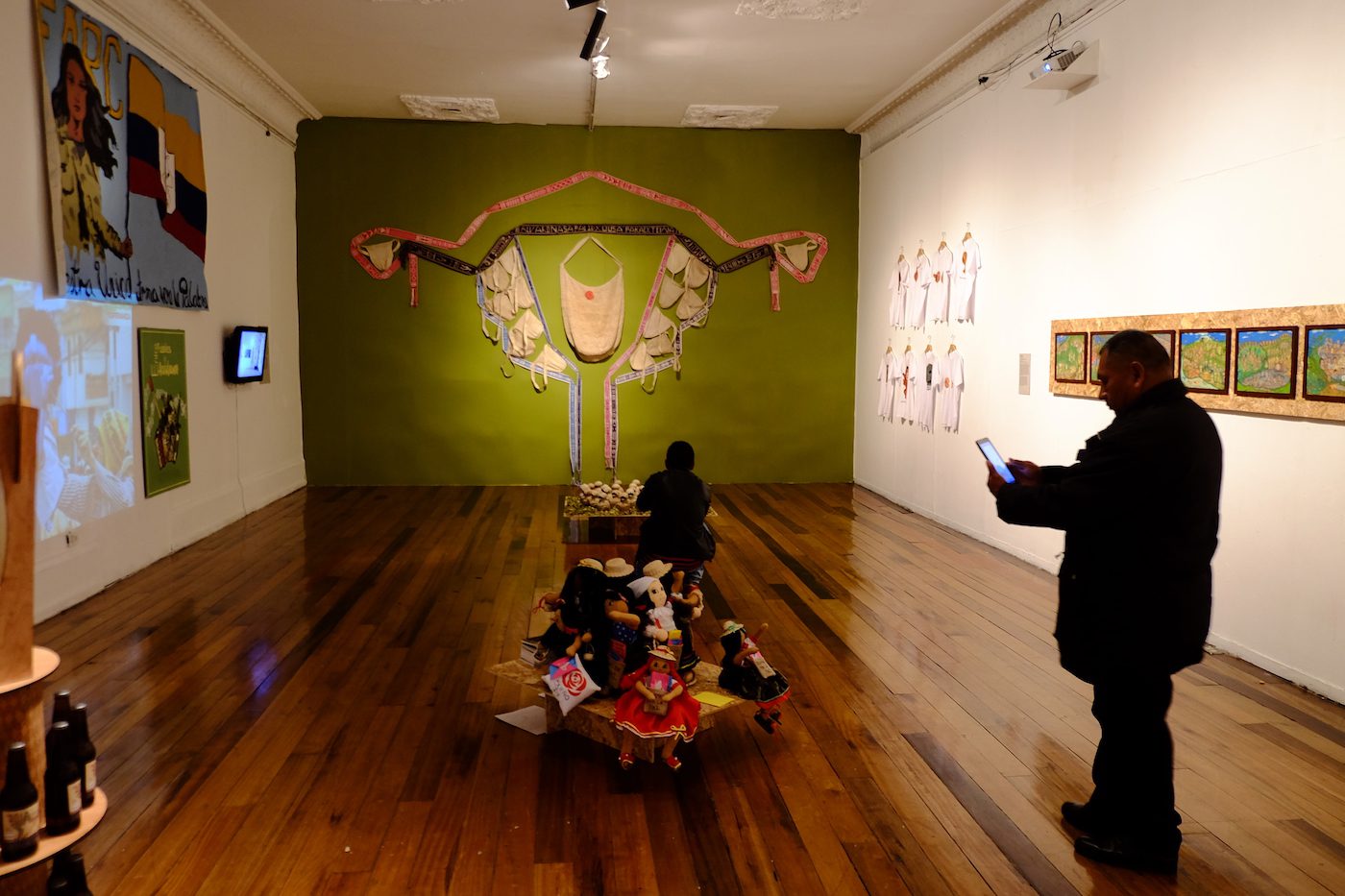 CMPD: The collective Minga Prácticas De-Coloniales was founded in the context of the XVI Regional Artist Salon, when visual artists Estefanía García and Edison Quiñones curated the show in 2018. The idea was to decolonize the concepts of “art salon”, “work” and “individual artist”. Later, philosophers Eyder Calambás and Jennifer Ávila joined the collective to complement the theoretical and narrative reflection. Our approach has been, as the indigenous peoples say: to return to the navel, which is the process of articulating ourselves with the communities we come from.

C&AL: Can you tell us about your artistic practices?

CMPD: One of the exercises of the decolonial work was to accompany the ancestral practices of weaving a backpack with women of Nasa descent who served as soldiers in the FARC (Revolutionary Armed Forces of Colombia) guerilla, in the so-called Territorial Spaces for Training and Reincorporation in Santa Rosa, Cauca. Following this accompaniment, the women set up two weaving cooperatives, creating a synthesis between their ancestral practices and the social and political training process they received as soldiers in the FARC. This is an example of decolonial work. There is no individual artist, there is no work as an object but as an integral process from the land: the care for the land, the offering, the birth of plants, the harvest, the transformation, the spinning and weaving. For us, creation is collective by its own nature and the work of art is the recovery of that collective fabric. 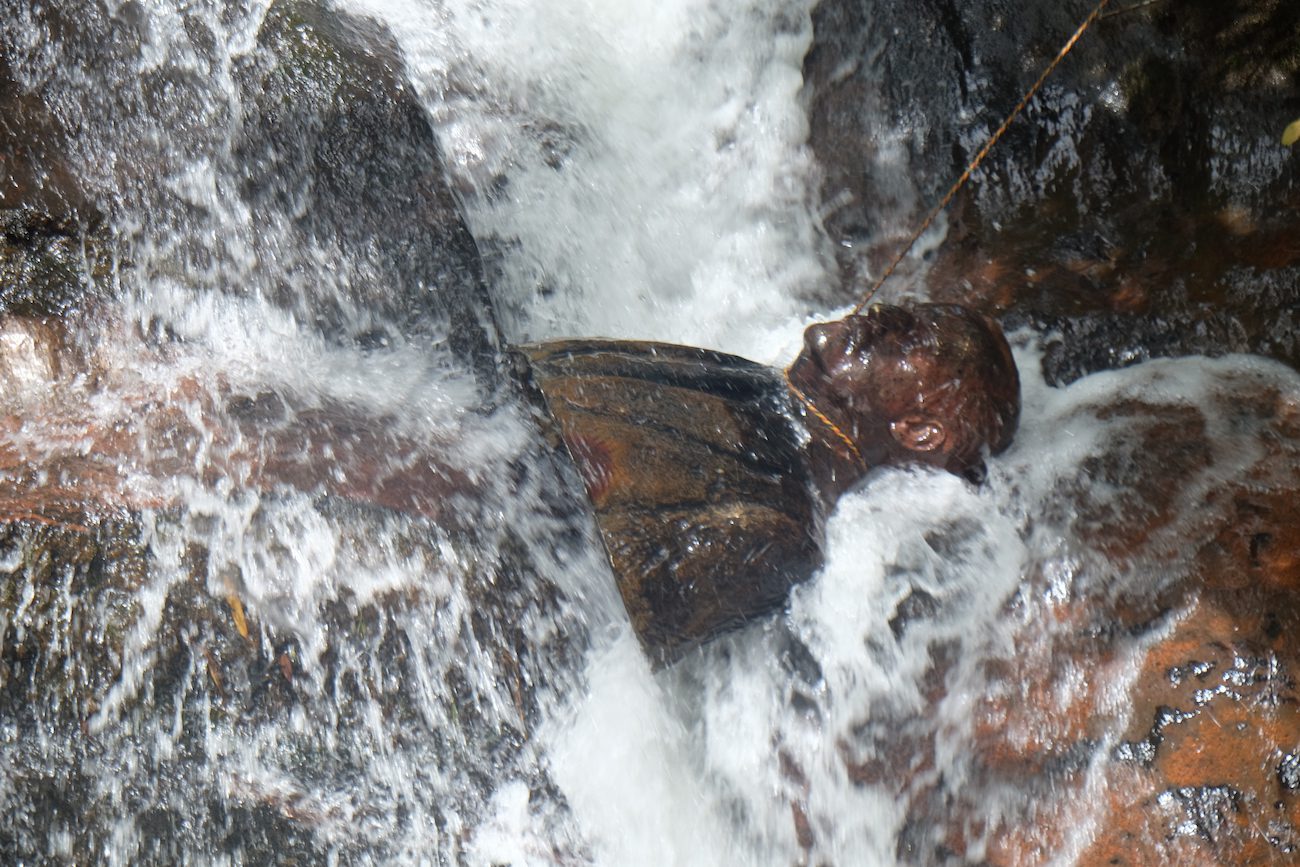 C&AL: Before and during the massive social strike that spread throughout Colombia during May and June 2021, several indigenous groups of the Misak people took part in dismantling colonial monuments. What implications did this have?

CMPD: On 16 September 2019, the Misak people toppled the statue of Sebastián de Belalcázar [16th century Spanish conqueror] in Popayán because it was placed on top of an ancestral indigenous pyramid, located in the Morro del Tulcán. This indigenous temple was destroyed, flattened and covered with earth to make it look like a vigil point. Spiritually, this produced a blockage of the territorial energy as well as a way to prevent an activation of the social and political consciousness of the people.

28 April 2021 marked the zero hour of the national strike when the Misak people knocked down the second statue of Sebastián de Belalcázar in the town of Cali. This should not be understood as a spiritual action. Rather, it represents a moment of resignification linked to the indigenous struggle of the Misak people. This has been the history of the Cauca region in the last 500 years, extending to the current armed conflict in Colombia; from the resistance of indigenous organizations against the farmers and earth workers in the nineteenth century and the formation of bipartisanship decades later. It is the resistance that indigenous communities have had to implement all these years.

CMPD: There is a resignification of the dignity of a people and an awakening of our long deferred dream. Now, people are beginning to look into and to understand the colonialist logic. It is not about knocking down a monument; it is about giving thought to what is going to happen in the future, and this is what interests us. We have investigated the 37 monuments of the department located in sacred spaces of our communities. Cauca is a very important territory in the processes of resistance and yet, there is not a single indigenous monument in the region. We have to start taking leadership, formulate questions and, through art, implement it in the discourse.

C&AL: As a collective, how have you accompanied the social protests in Colombia?

CMPD: The strike began on April 28, 2021 and that same day, we went out as a collective in Popayán. Eyder Calambás put on the Misak ruana [traditional Colombian type of poncho], and Edison Quiñones the one from Nasa and Jennifer Ávila the Yanakuna one. We put on the “Aya-Huma” mask, the spirit that teaches the dance of Inti Raymi to the Andean people. With us, we brought three goats: Fuerza (Force), Guardia (Vigilance) and Tierra (Earth). These three goats were draped in the flags of the indigenous peoples and the CRIC. This was a different way of protesting, a performative act, an action of walking beside the goats all along the route and making the protest visible through art. In a sense, this exercise was a pedagogical act. 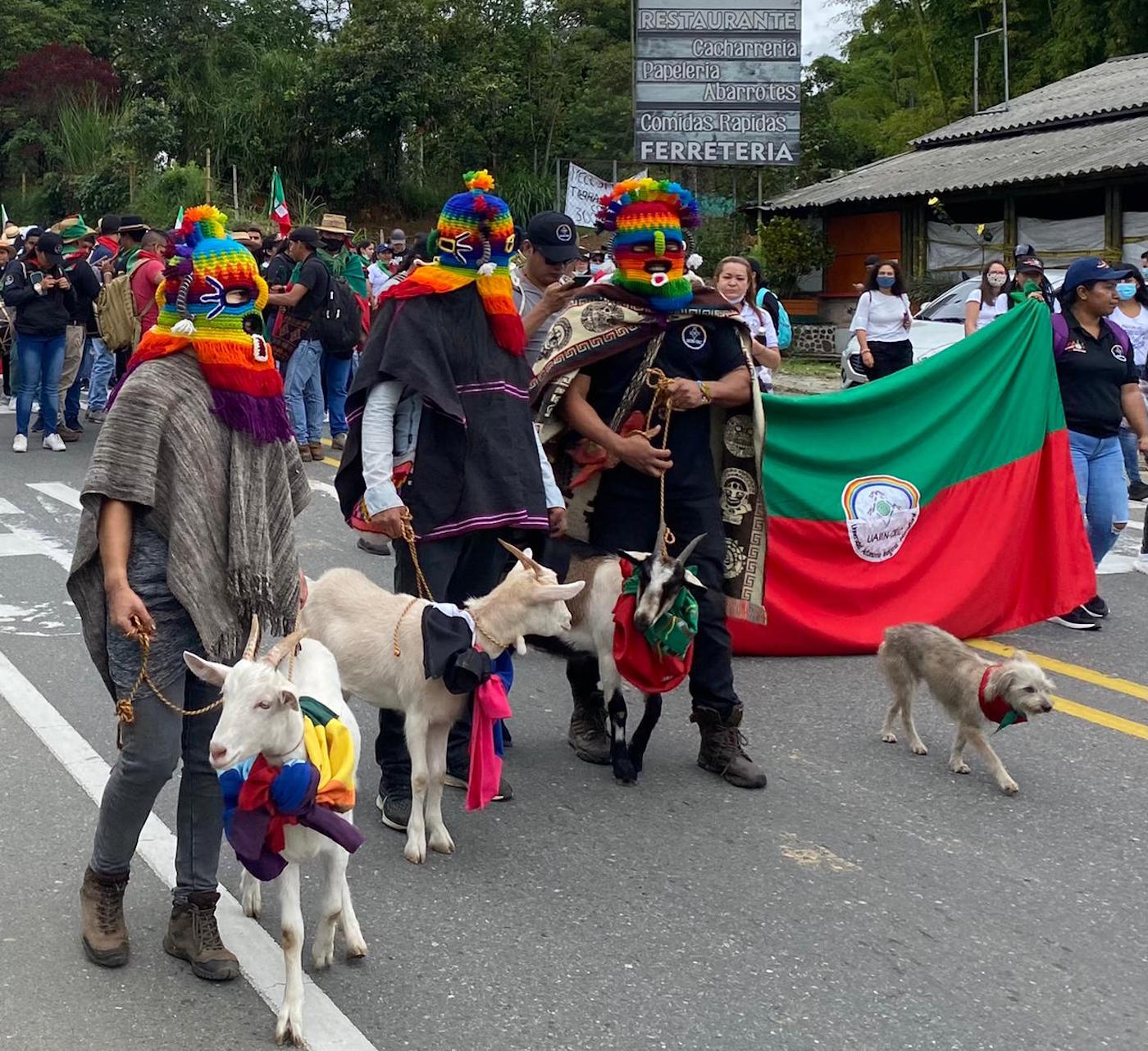 C&AL: You talk about how an unprecedented type of protest is taking place in the streets. What kind of dynamics emerged during the national strike?

CMPD: The type of mobilization that is currently taking place brings together two sectors that had never been taken into account before: the poorest young people from the marginalized neighborhoods and their mothers. They joined the strike and became protagonists. In conventional mobilization, people make their voices heard, generating a decree that includes state commitments to the community and the territory. In Cali, a reverse process took place at the points of resistance. The objective was not to strengthen territorial dependence on the state, but to make people more aware of their capacity to self-govern the territory they inhabit and to build a multicultural and multifaceted body of autonomous territorial governments. A collective fabric of self-government is being organized, and for us that would be the great work of art.

C&AL: What lessons have you learned from this mobilization?

CMPD: To an extent, the members of the collective are trained to teach. However, the experience in the territories and of decolonialisation shows us more and more that we have to learn what it means to be decolonial beyond the theories and concepts we have.

For us, the unprecedented is that we have found an analogy between what we learned living in the territory and what we experienced in the city with the young people at the front line of the protests. There is a link, a territorial defense and an increasingly apparent need to govern ourselves and not depend on the state.

Ana Luisa González studied Literature and works as an independent culture journalist and reporter in Colombia.