Collaborating Against the Odds

Having always looked for alternative modes of representation, this year the directors of Accra’s CHALE WOTE Street Art Festival extended the exhibition venues: two old forts that used to be slave-trade prisons. Our author Lineo Segoete looks beyond and ahead of the seventh edition of the festival...

This past August the CHALE WOTE Street Art Festival celebrated its seventh edition since its inception in 2011. Over 30,000 Ghanaians and visitors from across the world made what can only be described as an art pilgrimage to the James Town district of Accra to soak up the creativity of the week-long festival. Originally, CHALE WOTE (meaning “Friend, let’s go” in Ga) was a response to a trend of complacency that the festival’s directors, Mantse Aryeequaye and Sionne Neely (founders and directors of cultural network AccraDotAlt), had noticed during monthly parties they held with peers and friends. Their logic was: Why be vexed and continue to whine about a lack of infrastructure to support artists when there was already an abundance of content being created which could be taken out to the public? 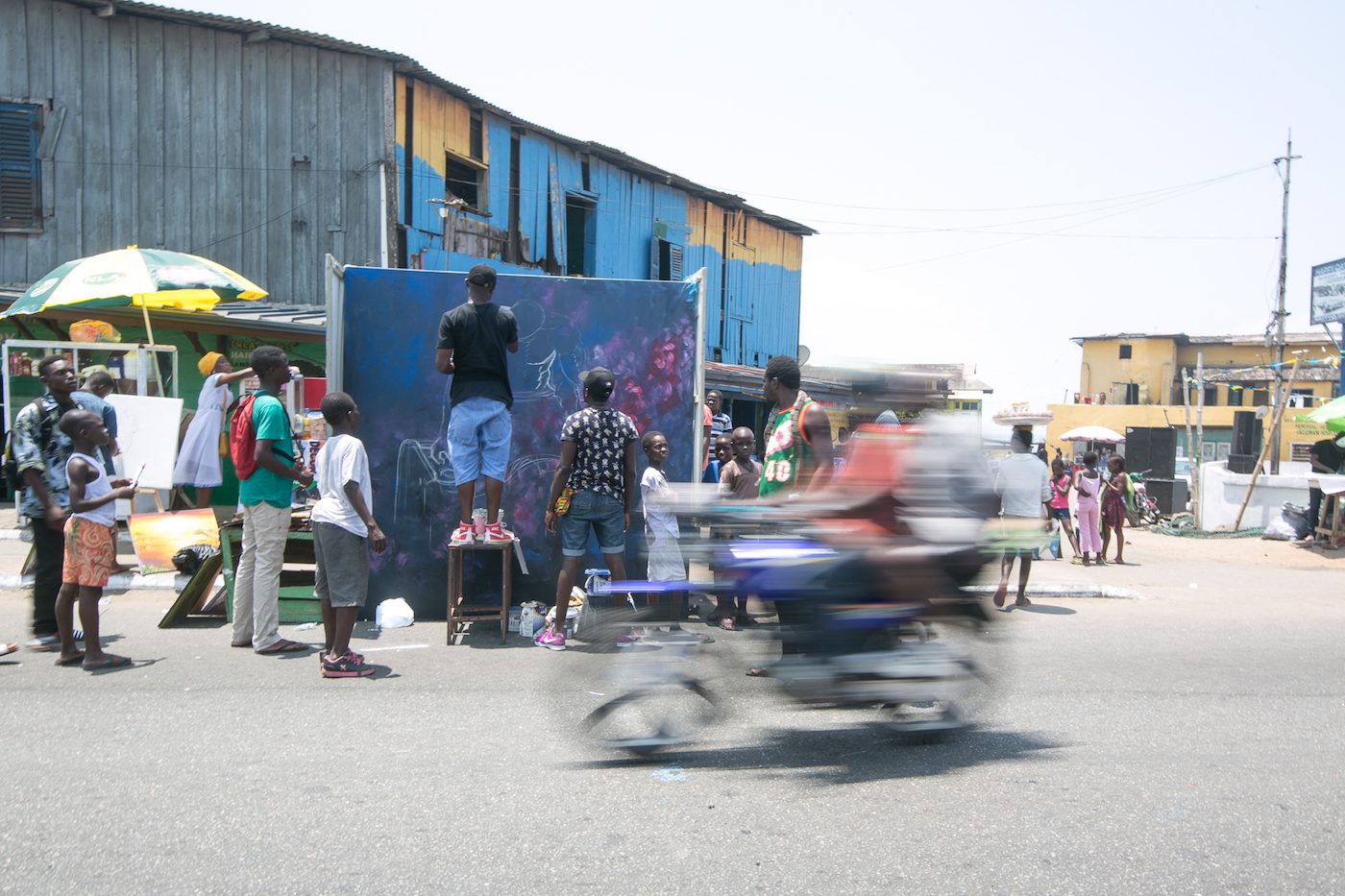 Until quite recently art was typically a marginalized discipline in Ghana. It was therefore critical to create cohesion in the form of a movement. So, as far as access, it only made sense to take the art to the streets where anyone and everyone could participate in its appreciation and consumption. James Town was an obvious choice because of its history and its apparent state of decay. AccraDotAlt wanted to draw attention toward the hidden beauty, resilience, heritage, and spiritual potency of this part of town and share it with everyone willing to embrace it. 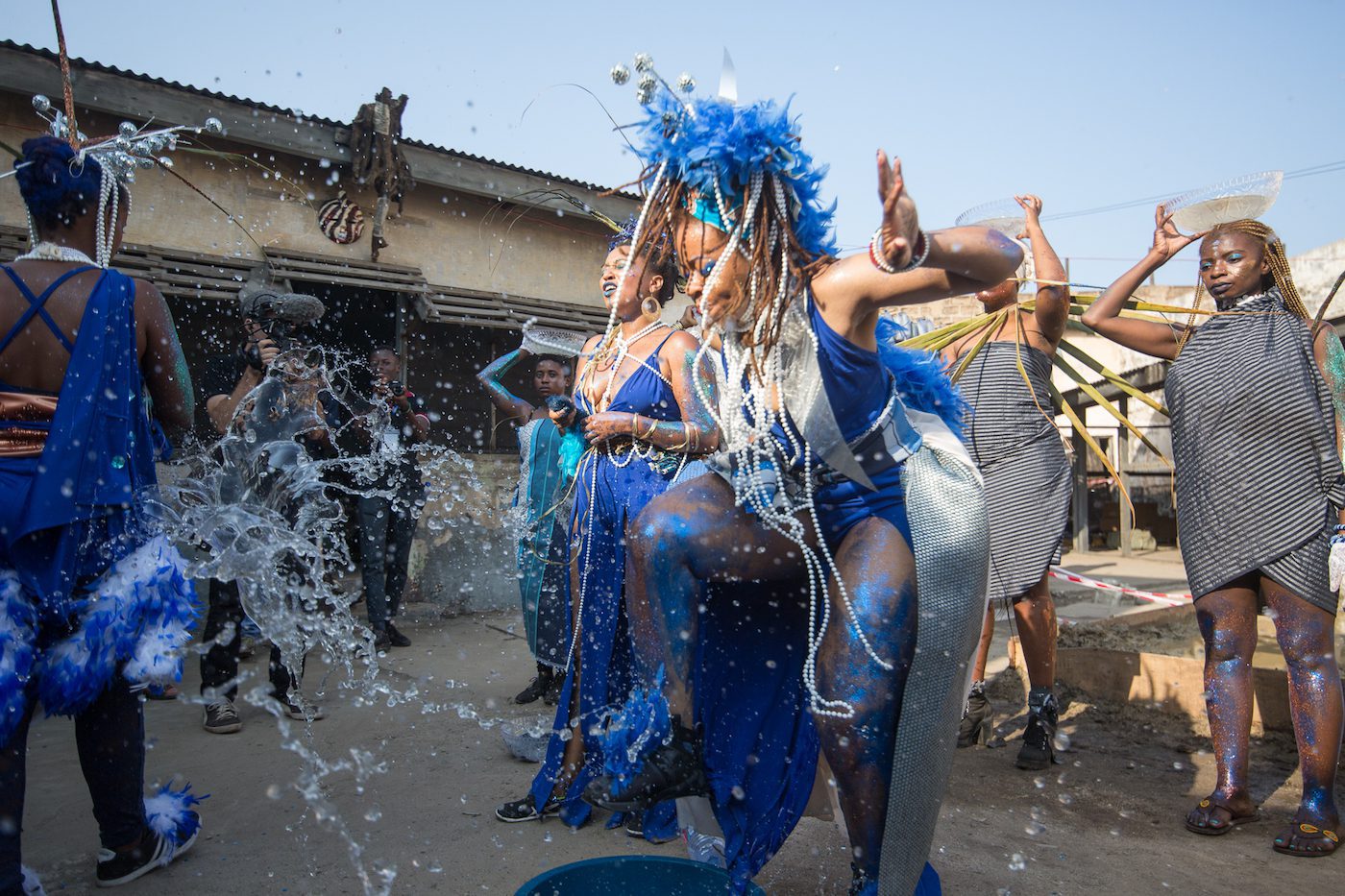 This year’s theme, Wata Mata (“water matter”), marked the final chapter in a trilogy that began in 2015. African Electronics, Spirit Robot, and Wata Mata are each a subset of a spiritual and physical manifestation of liberation for AccraDotAlt. Its idea is rooted in dreaming, in perceiving dreaming as a system of mass disentanglement from oppression, particularly for people of African descent. According to Aryeequaye, the process of creation is sacred in that it is both a metaphysical and scientific exercise. Drawing from symbolism, rites of passage, and ceremonial practices, he and his team seek to stimulate a new political ideology of realization for African artists. And through the years artists have faithfully answered their call by offering their own interpretations, both radical and revolutionary, to promote an awareness and love for heritage, identity, and life in Africa. 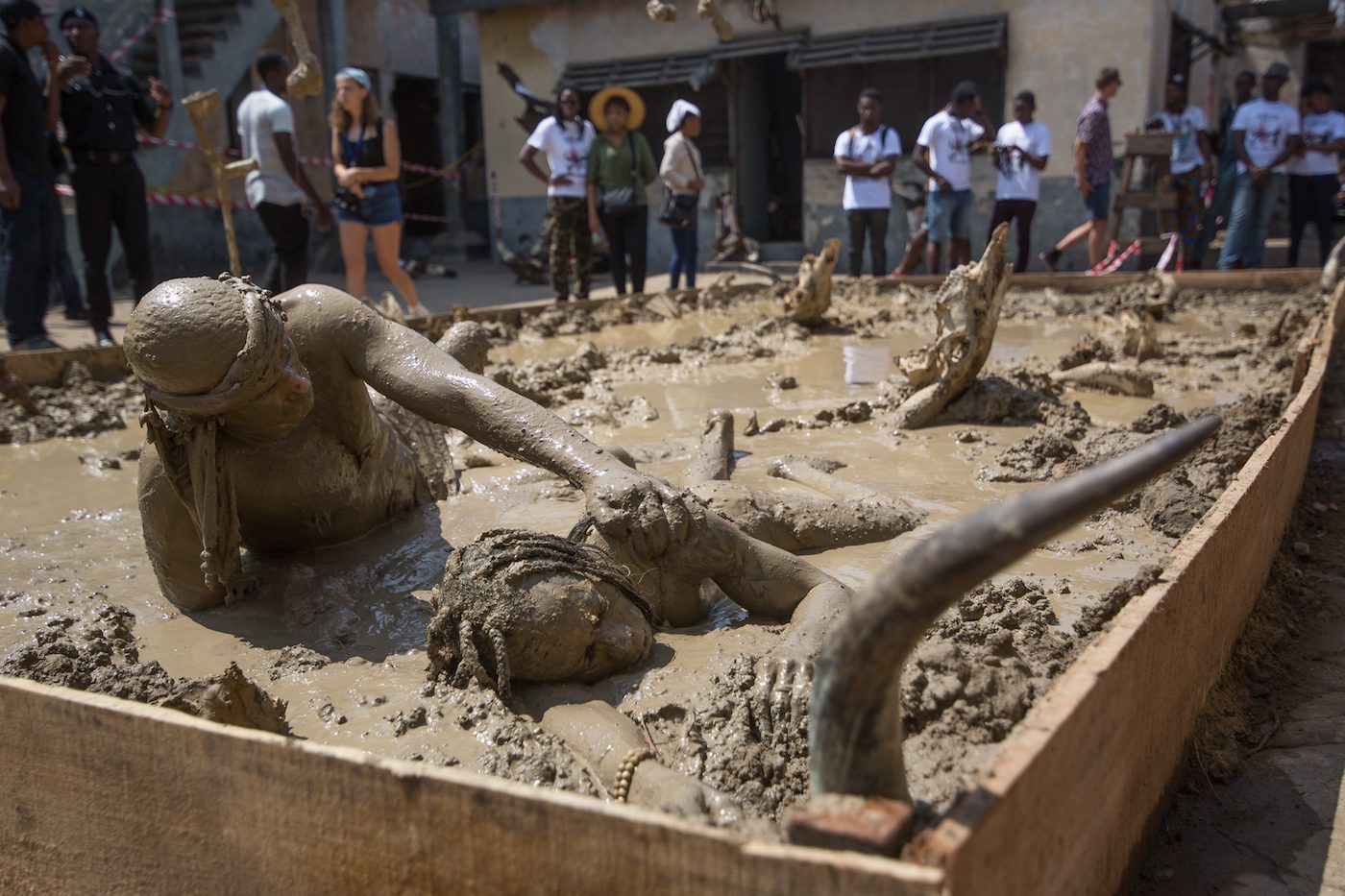 This year AccraDotAlt achieved a major breakthrough when they finally convinced the city of Accra to allow them access to James Fort and Ussher Fort. Both were initially built as trading posts by English and Dutch settlers respectively, but were later used as slave-trade prisons – particularly James Fort. “The forts were human harvesting machines,” as Aryeequaye puts it – and it was about time that some positivity was injected into those spaces. In keeping with the spiritual foundations of the festival, a cleansing ceremony to open a portal for new energy was held before installations were put up. Aryeequaye and his team wanted to make a statement and reclaim the representation of the sites. On a production level, they wanted the spaces open so that they could function as galleries to show and prevent unnecessary damage to artworks. 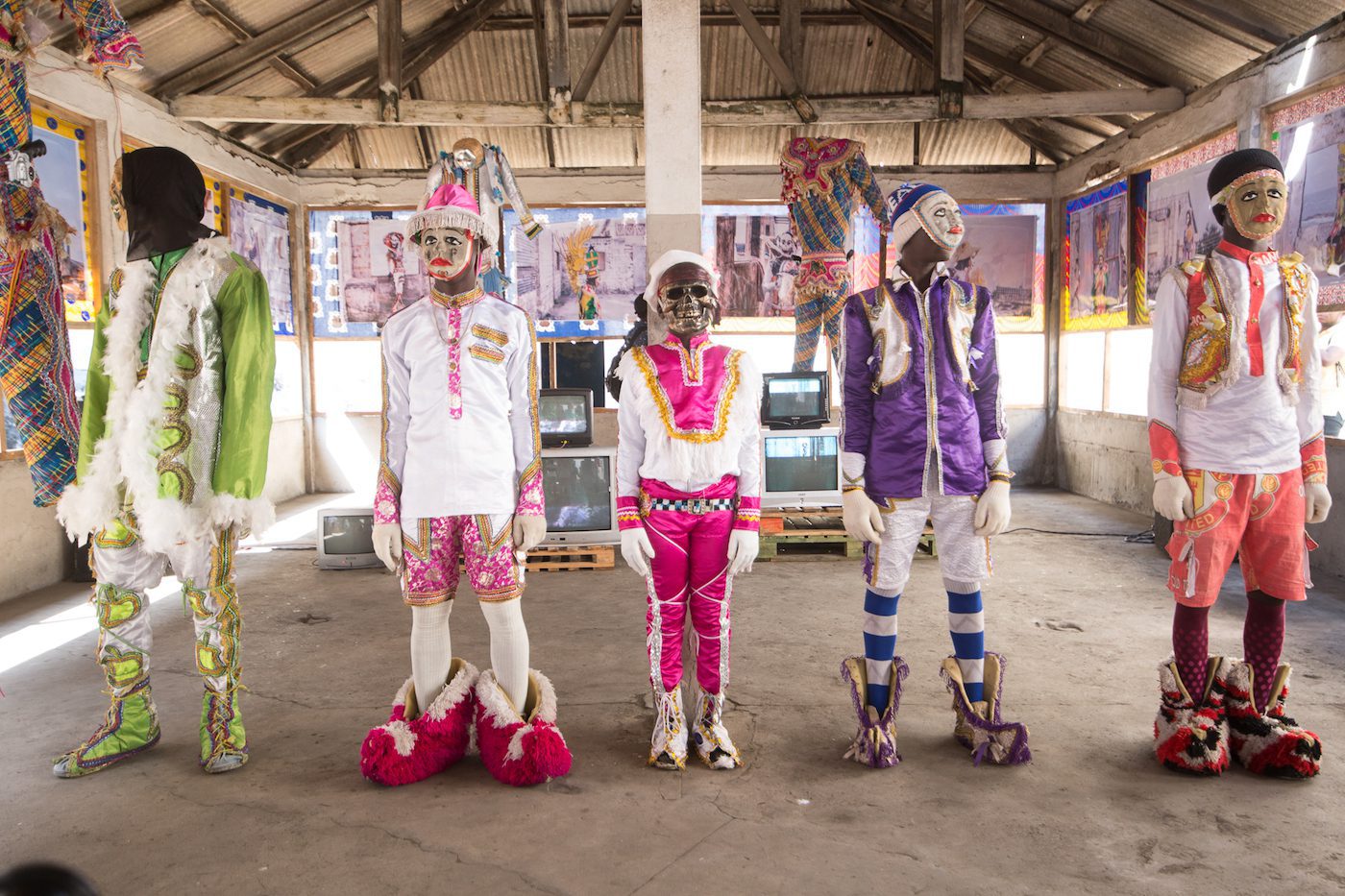 This year’s edition of the festival was a seven-day frenzy that included 15 satellite locations hosting 51 local and international artists and dozens of off-site exhibitions. Mid-week, the program offered The Labs, featuring panel discussions, lectures, film screenings, processions, performances, photoshoots, interactive graffiti, and workshops, while the weekend saw a display of every medium of art imaginable, plus extreme sports. The symbiotic convergence of artists and art enthusiasts, food, fashion, cultures, and music is what makes CHALE WOTE the formidable force it is. Its growth in the last few years has shocked even the organizers themselves and recharged the James Town community with a surge of hope and possibility. The creative output produced by participants also invigorates a transformation of economies, thinking, attitudes and modes of production. 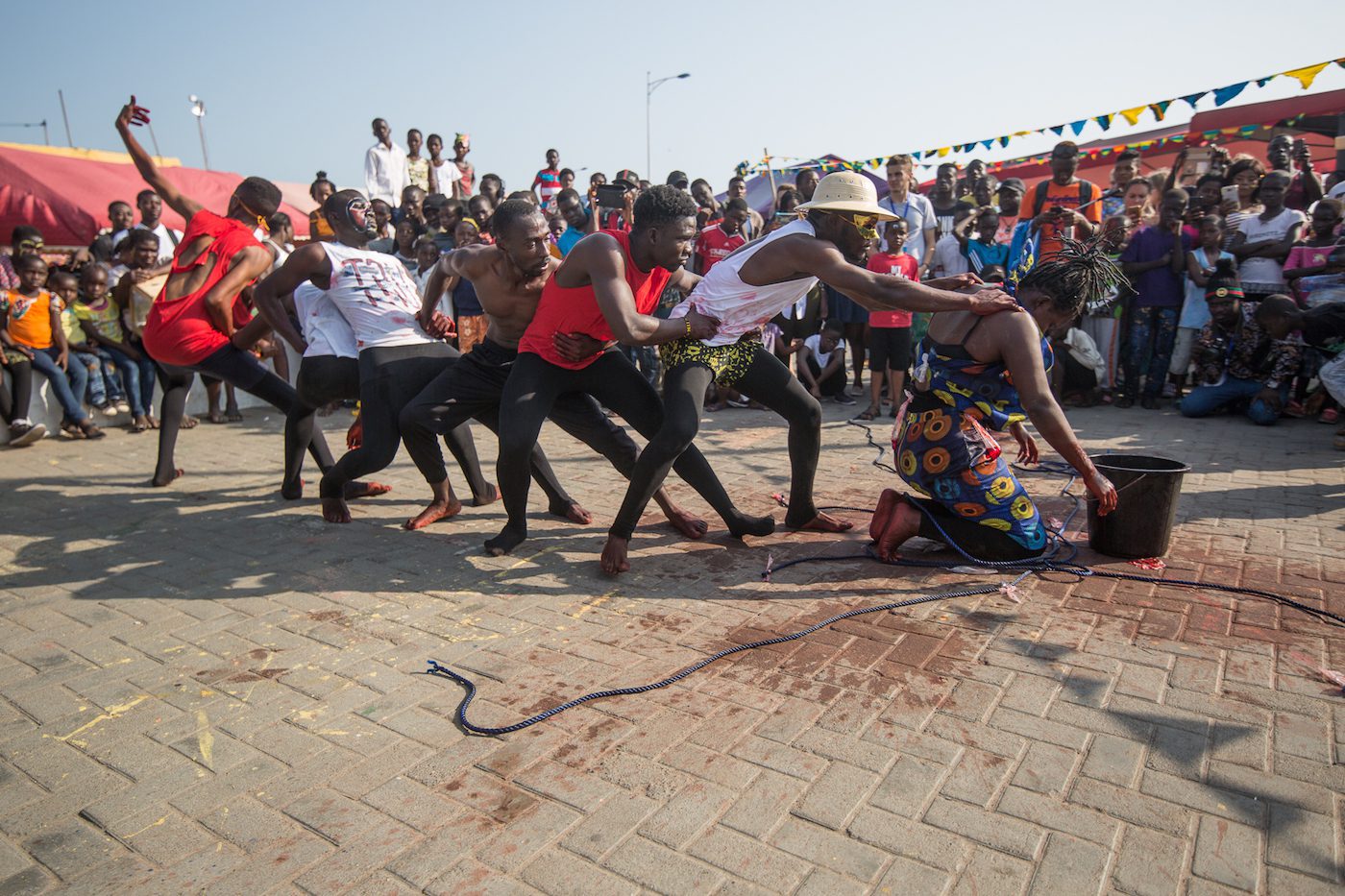 Naturally CHALE WOTE did not escape its share of drama and trials. Among its list of hurdles, a procession in honor of the goddess Mami Wata drew harsh criticism from religious fundamentalists within Accra. The procession was much more a political call to action among people of African descent than an ode to the deity; her name was repurposed to use its “Wata” force as a political mobilization apparatus. Yet fundamentalists could not embrace the activity as a radical political demonstration cloaked in traditional performance and ritual, and were quick to call the festival evil. In another incident, Accra’s Gallery 1957 was called out for plagiarizing Josephine Kuuire and Aryeequaye’s CHALE WOTE exhibition, The Country Formerly Known as Ghana, which utilized the costumes and performance practices of the Winneba Masquerade. And lastly, several people, both local and foreign, were caught attempting to record footage without proper accreditation. Despite some negativity, the streets still filled up with troupes of couples, children of all ages, young people posing for selfies or videos, and even high-ranking officials who just had to join in the jamboree. 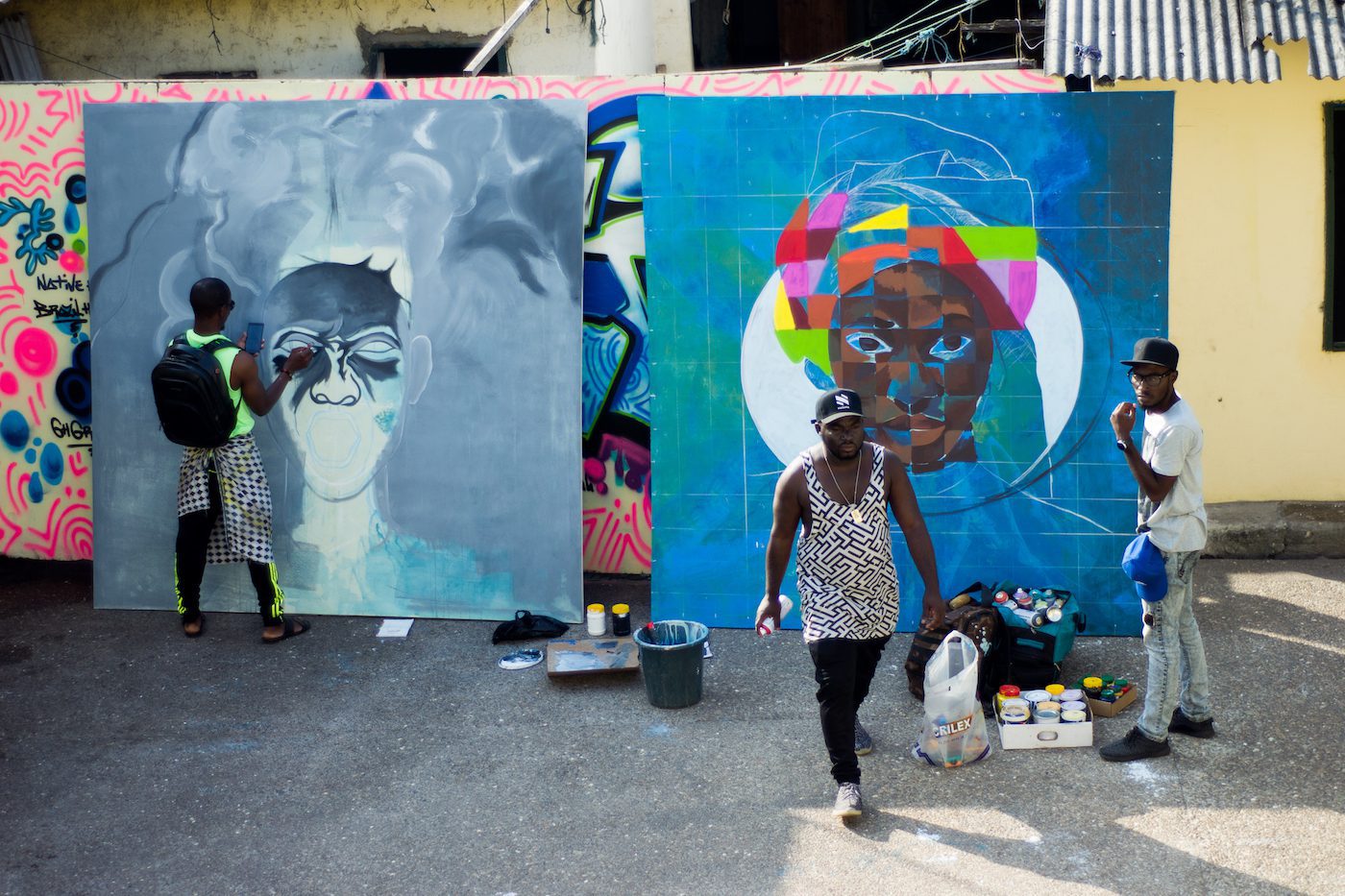 Africa needs more outlets like CHALE WOTE. We need more visionaries who answer the call to take on artistic ventures by themselves instead of waiting for governments and other institutional bodies to take the lead. A shortage of infrastructure to promote art and preserve culture does not automatically translate to a shortage of creative people willing to push their genius and boundaries for the benefit of sharing important messages through their various crafts. Over and beyond representing Ghana, the festival is a link for Pan-African collaboration, engagement, and solidarity.

Lineo Segoete is the co-director of  Ba re e ne re literary arts  in Lesotho and a freelance writer and wanderer governed by creativity. Follow her on  Twitter  and  Instagram.