In Conversation with Duane Linklater

The gathering Under the Mango Tree–Sites of Learning, that was organized by an education of documenta 14 and ifa, acted as an open forum to explore the notion and practice of education globally. Artist Duane Linklater, who participated in the gathering with the project Wood Land School, met with Aïcha Diallo. The artist from Canada of Omaskêko Cree descent discusses education, cultural expressions and the centering of indigeneity.

Aïcha Diallo: You are the Founding Director and one of the artistic members of the ongoing project Wood Land School, along with Tanya Lukin Linklater and cheyanne turions. How did this project all start?

Duane Linklater: I started the project Wood Land School in 2011 in my studio located at Nipissing First Nations in northern Ontario. At that time, I was in Graduate School, and despite the lack of public attention to my then work, I really wanted to collaborate with some friends and people I admired. There were five of us in that first exhibition. In addition, the project needed to have a title. At that time, I was doing some research about a group of Indigenous artists who were making work in the 1970s and 80s mostly here in Canada. Although they named themselves the Professional Native Indian Artists Inc., they were known publicly as Woodland School of Artists. Inspired by this, I called the project Wood Land School, but only with the distinction that the word is separated into two words. By creating a small space between wood and land, I sought to break apart the ethnographic categorization of eastern Indigenous people in North America. As I’m also very much invested in analyzing and challenging language, their name also made me think, in particular in regards to the use of “School”. In both Canada and in the United States, there is a dark and violent legacy of a schooling system called the residential schools to which Indigenous children were forcibly sent. Until 1996, this educational system was in place in order to assimilate Indigenous people into the mainstream against their will. 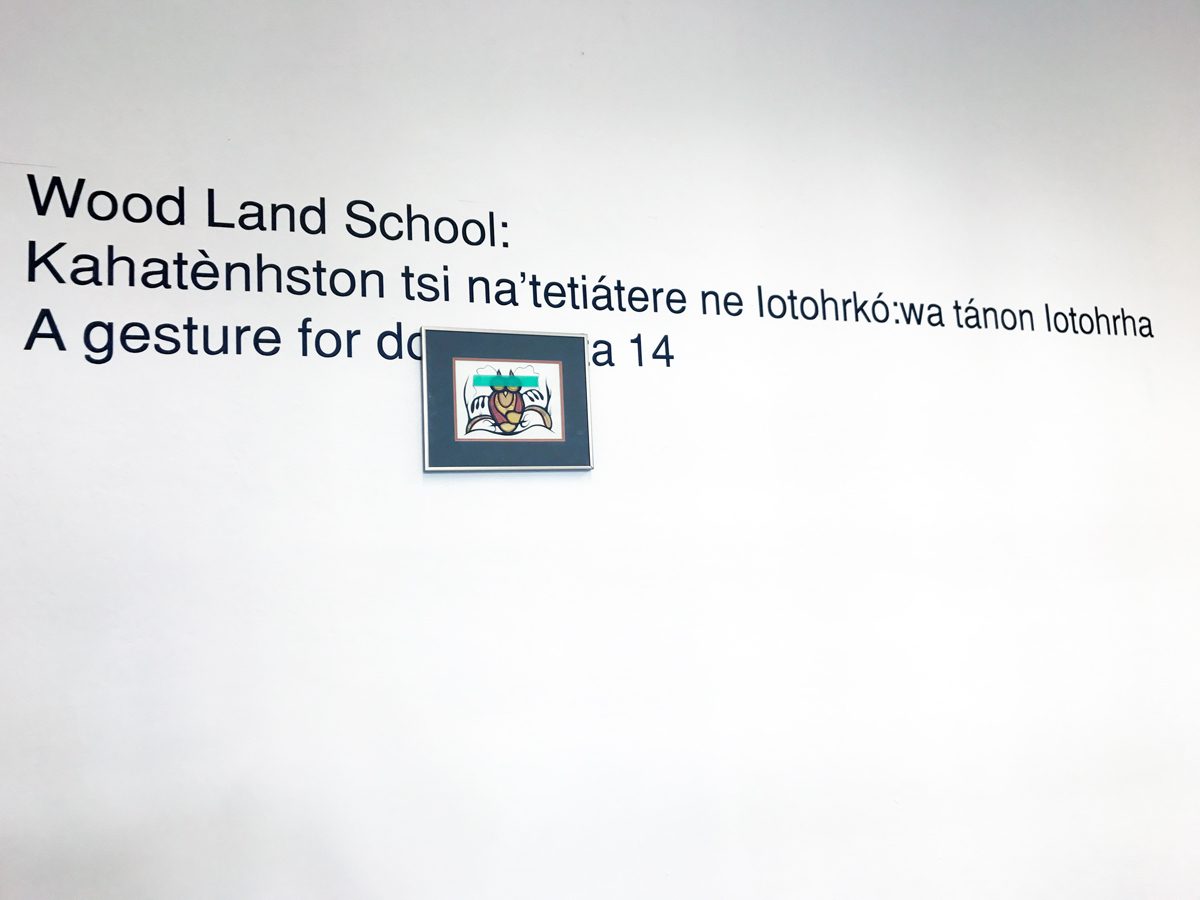 A view of Wood Land School’s project at documenta 14. The print is an unverified Joshim Kakagamic from the collection of Duane Linklater found in North Bay.

AD: Almost five weeks have passed since the gathering Under the Mango Tree – Ulterior Sites of Learning took place at documenta 14 in Athens and Kassel. At this point, could you tell us more about anything that struck you during your time and participation in Athens and Kassel?

DL: First of all, I can only speak from my own perspective because obviously both my colleagues Tanya and Cheyanne had each a different experience. For my part, I thought about many things while I was there. One of them was exhaustion that stayed with me all the time in the physical form due to extended traveling from North America to Athens and then to Kassel. I was thinking quite deeply what my body was trying to articulate itself this way being in this specific place. And this was an interesting signal to myself of my body resisting what I was doing. In other words, my body was wishing to physically retreat somewhere else in order to find some space for myself to rest while I was encountering certain kinds of European normativity. This normativity was expressed in different ways and in different places in both Athens and Kassel through some of the exhibitions, the use of language and the politics around these. Having to consistently challenge that normativity in museums, galleries, and in discursive spaces is in fact a depleting endeavor for myself as being a visible Indigenous person from Canada.

AD: Through your words, I can also sense you were experiencing something that was violent…

DL: Yes, this approaches some of that language and that action. This is only speaking to my own sensitivity and my own persona. And this brings up something interesting about the idea where I wanted to retreat to which was my homeland in North America. Interestingly enough, in the past couple of weeks in the US not too far from here in Canada. Actually only 12-hours drive away from here there were extreme forms of racist violence that occured in the US, namely in Charlottesville. So this is the place where I retreat to. As a result, the question that emerges is: Is there such a thing as a place to retreat to? When this sort of things are so consistent in the world, I have to think a lot about this idea of retreating and finding safety somewhere. 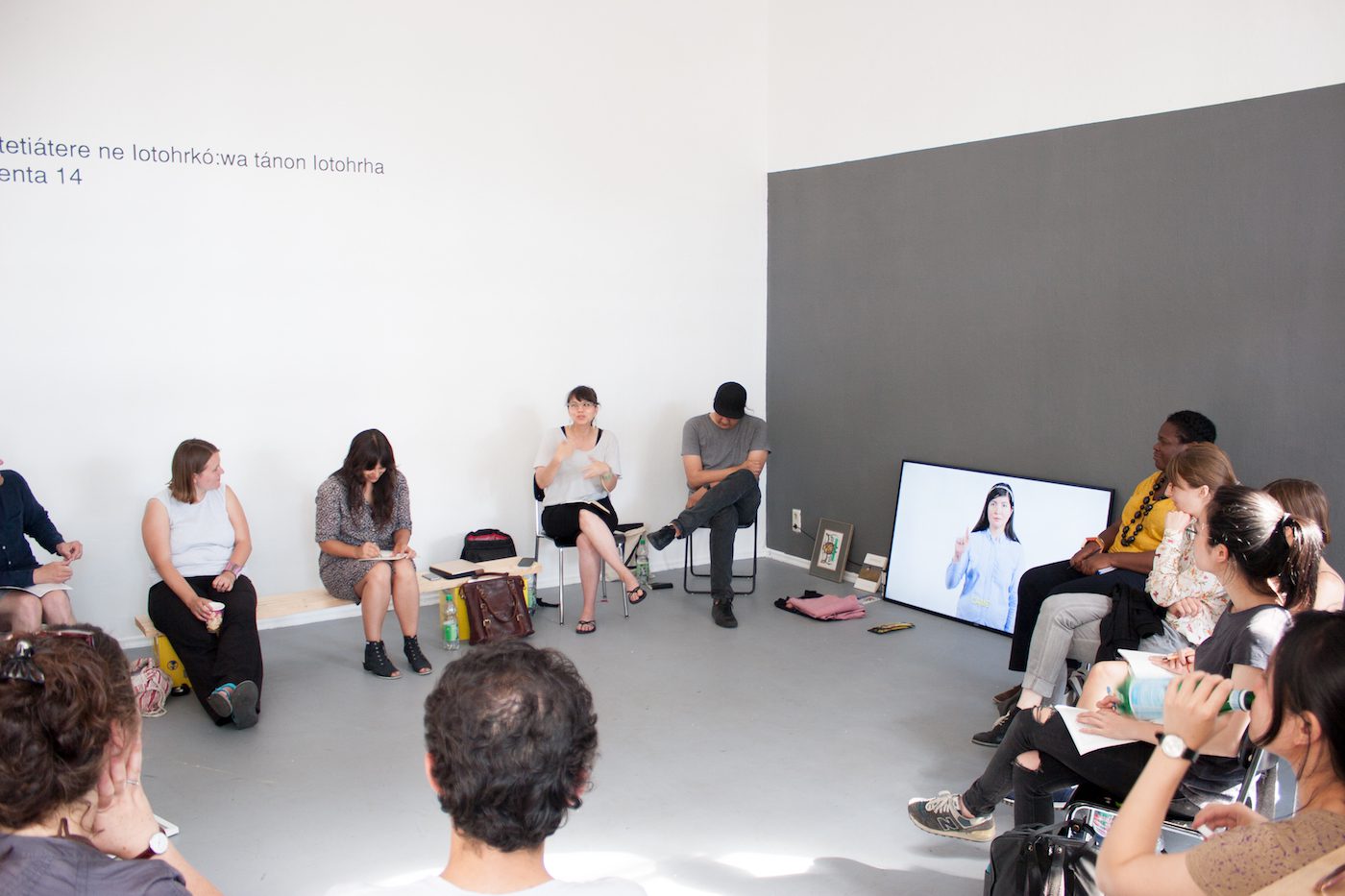 AD: What you just said is really moving and honest. Now for me the notion of safe space stemming from Black Feminist thought comes to mind. You just described the idea of homeland in which at the same time one experiences violence. Do you believe that it is possible to create actively safe spaces under these conditions?

DL: That is what the project of Wood Land School is partly about by creating spaces in which indigeneity, that means including Indigenous bodies, Indigenous forms and thought and practice, is centered in the spaces which we are invited to. I hope this somehow translates into safe spaces for artists, theorists, thinkers and folks who want to articulate themselves.  I think it’s important for Indigenous people here in Canada and in the US to have spaces where we are centered because as I was mentioning earlier, there is this centering of white normativity in whatever form it might be everywhere else. That in itself is an extreme expression of violence because it displaces Indigenous people, it displaces black people, it displaces queer and trans people, it displaces women…

In the Spring of this year, I went to a talk by scholar Fred Moten at the University of Toronto. There was also a wonderful panel of scholars, poets and artists from the black community in Canada and the US. At the end, Moten specifically spoke about the centering of love in these spaces. He said “There is no outside“. This directly spoke to me and the project of centering indigeneity. It is important to start thinking critically about what it means when Wood Land School is requested or wants to be in defined spaces. Does this displace blackness? Does this displace queerness?… At the end of the day, we don’t want to recreate any form of violent displacements. 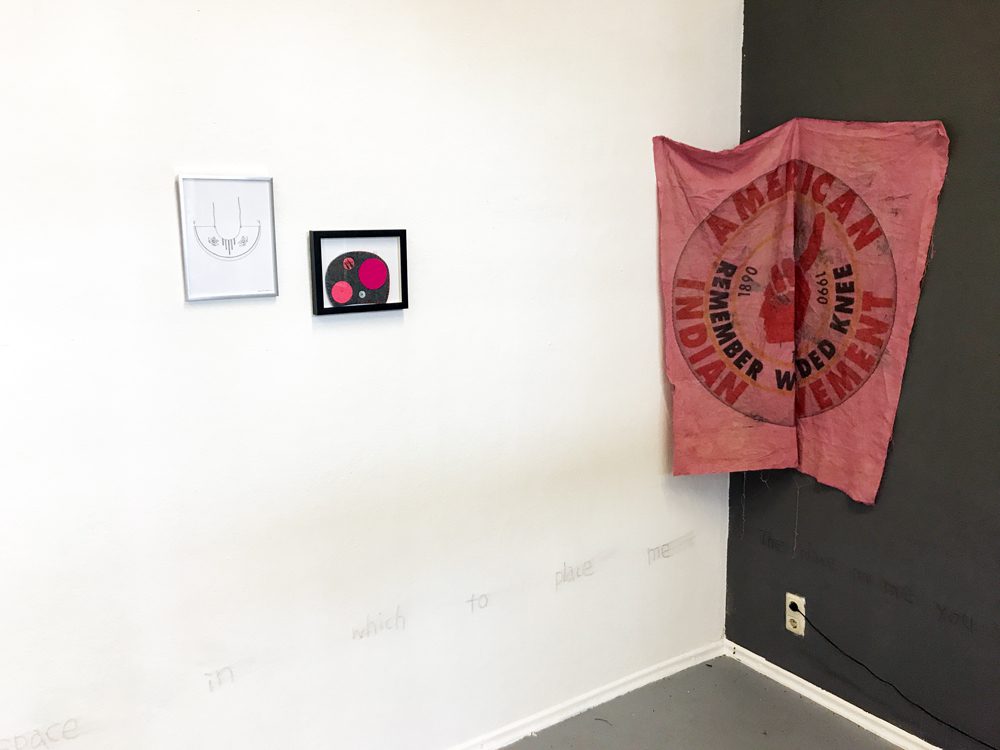 AD: Looking back, how would you describe how and where you grew up?

DL: I grew up in northern Ontario, in Treaty 9 territory in the late 1970s and in the 1980s.  During those times, as a young boy, being in a mainstream Canadian school, I encountered a fair share of racism and bigotry. It was a difficult experience being a child in these institutions. Despite those educational experiences that I had in my childhood and youth, even in my undergraduate and graduate school I found teachers who taught me in spaces which were more powerful than those racist experiences. So I’m deeply indebted to those teachers who were able to create spaces of tenderness, love as well as indigeneity. They were Indigenous people teaching other Indigenous people in Indigenous spaces.

DL: Well, that’s a really complicated question. I don’t want to give an answer which essentializes my experiences as an Indigenous person. But there is one concern that many Indigenous people share. And this is land. Not only is this about the idea of how we conceive land, but also how we are active on that land and how we create spaces for each other. It is important not only to ourselves at this moment, but also it will matter to the future generations that are not born yet. 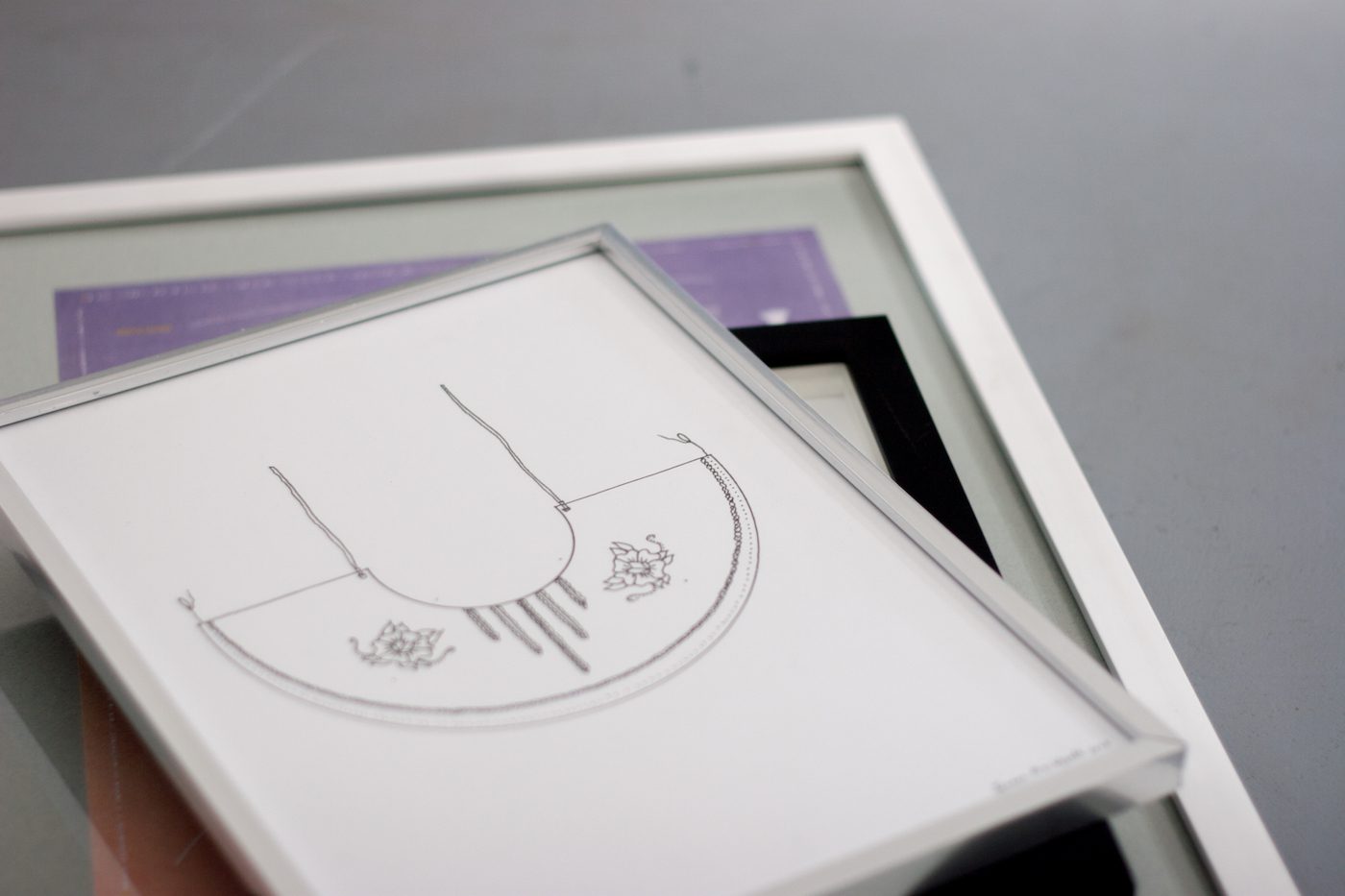 AD: I recently had a discussion with a dear friend of mine about an inspiring text by the thinker and activist Françoise Vergès – which appears in the book Écrire l’Afrique-Monde (Writing a Global Africa). In this piece, Vergès argues that neo/colonialism and capitalism are one entity perpetuating a system of “cheap labour/cheap nature” in African contexts and beyond. I see somewhat a connection there when you talk about land…

DL: What I would say is that the current system of capitalism and the mechanisms of the federal government in the US still have a consistent goal which emerged immediately as soon as Europeans arrived in the Americas. In fact, there has been a perpetual gesture of the settlers to separate Indigenous people from land. That separation has taken extremely violent forms like death of Indigenous people and their systematic oppression. For instance, it is only 20 years ago that an Indigenous man was murdered by the provincial police. His name is Dudley George who was protesting peacefully, unarmed here in Ontario over land which rightfully belongs to his nation.

AD: In this regards, do you think that art can bring any alternative forms of resistance and protest?

DL: This is a very big question. I think it requires for myself a long period of reflection and doing to see what art is capable of when Indigenous people assert themselves politically and conceptually in the context of museums, galleries and the system of the art world in general. I am somewhat skeptical of what the art world can do to be honest. Despite my own skepticism, I still persist in doing it as well. I think that contradiction is interesting to me for someone who is an artist and who is Indigenous. 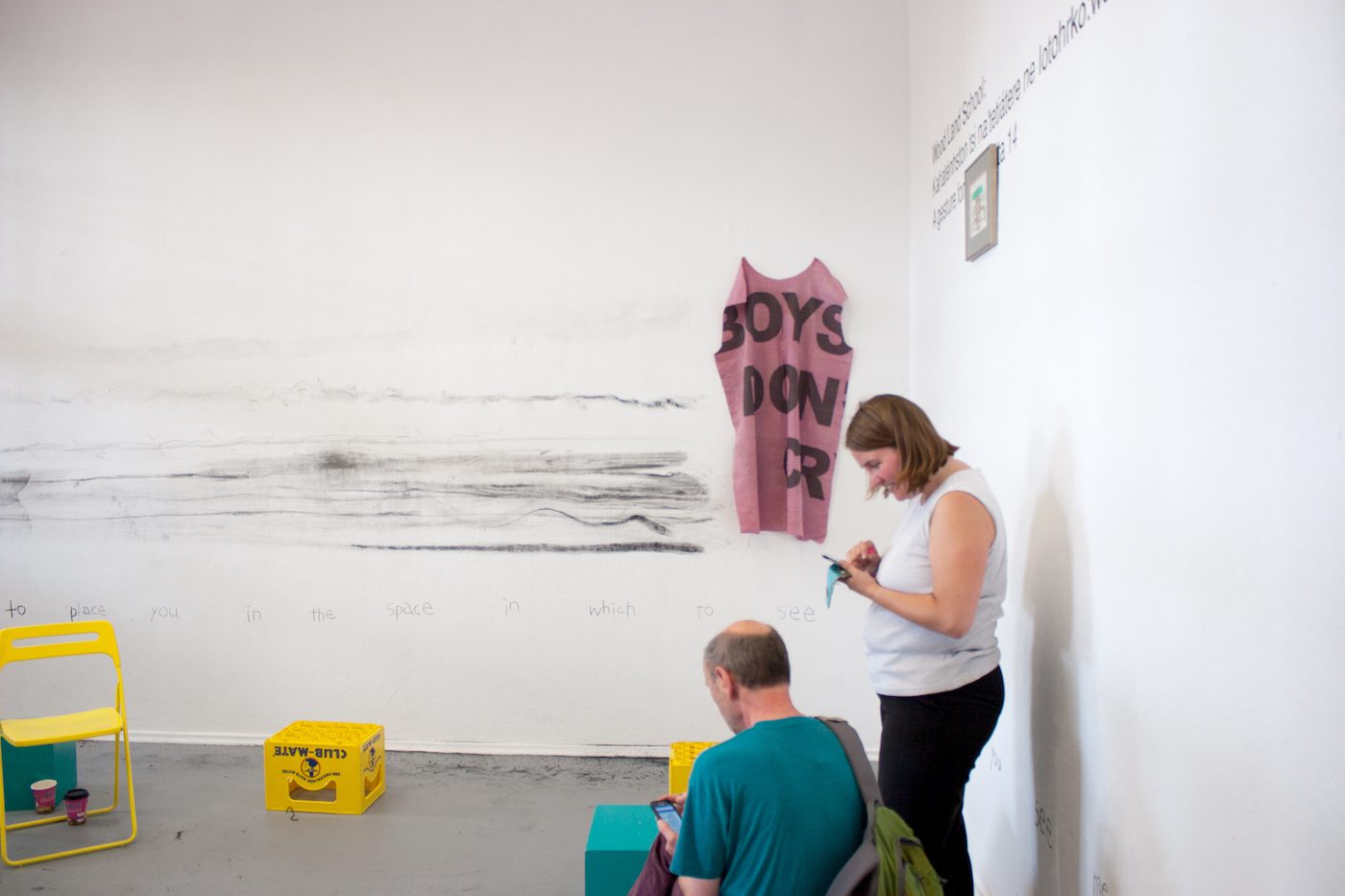 AD: I would like to know to which extent art played a crucial role in your childhood.

DL: When I grew up while going to school, art was very important to me. I enjoyed doing things that did not require a lot of money or even materials. When I was younger, I was left to draw and make things for example out of cardboards and disregarded magazines. I could discover the potentiality of certain materials as a child. That was formative for me. I still think that the idea of what art is and precisely of what indigenous art is will continue to reveal itself and unfold as I move along.

AD: As you just described that these spaces of your younger self are sustained within you in terms of memories, bodily senses, are you able to easily go back to these as an adult today?

DL: I have recently been thinking about my own memory and about how in some ways I can trust my memory of certain childhood memories or objects. But I do question my own memory. I question how I remember things, the subjectivities of those memories as well and how they change over time.

AD: Regarding the rebuilding of memories through stories, songs and so on. How do you consider this specifically in regards to Wood Land School?

DL: Concerning the idea of rebuilding, there is a link with what we have been doing in Montreal this year as well as in Kassel. The construction of those spaces has required many people to be involved in. Primarily there is myself, Tanya and Cheyanne and then our guests with whom work together to construct or suggest some kind of collective narratives that might be functioning in those spaces.  And this can be seen as a methodology of making Indigenous exhibitions.

This interview first appeared on ifa.de

Aïcha Diallo is joint Director of the art education program KontextSchule, affiliated with the UdK/University of the Arts, Berlin, and is Associate Editor of Contemporary And(C&).