Between Afro-Cuban and Diasporic Frames

The cover of the 3rd Havana Biennial catalogue (1989)

Founded under the sign of the painter Wifredo Lam (1902-1982), the Havana Biennial had among its main conceptual axes the question of the African influence in Cuban culture. For the creators of the Biennial, Lam’s personal trajectory — son of a Chinese father and a Cuban mother of African-Spanish descent — embodied not only the Third World imagery sought by the show at the time, but also the representation of the Afro-Cuban presence in the visual arts.

During the first edition of the Biennial (1984) an International Conference on Wifredo Lam was organized. In this conference, curator Lowery Stokes Sims cited the encounter between Lam and Aimé Césaire in 1941, and the influence of Léopold Sédar Senghor’s négritude as decisive factors leading the artist to assume the “africanity” in his own work. According to Stokes Sims, Lam “made use of familiar Afro-Cuban rituals and myths from childhood to create a unique and very personal modernist approach” (1) to his art. A forefront condition that, years later, would be emphasized by Gerardo Mosquera when claiming that Lam was the first American artist to express the “African element” in modern art. (2)

“The work of the Cuban artist is an achievement that can be […] related to négritude as a conscious and neological construction of a black paradigm. […] Fascinated by African and ‘primitive’ elements, thanks to modern art, he had begun to give outward expression to the ‘African’ and ‘primitive’ aspects of himself.” – Gerardo Mosquera 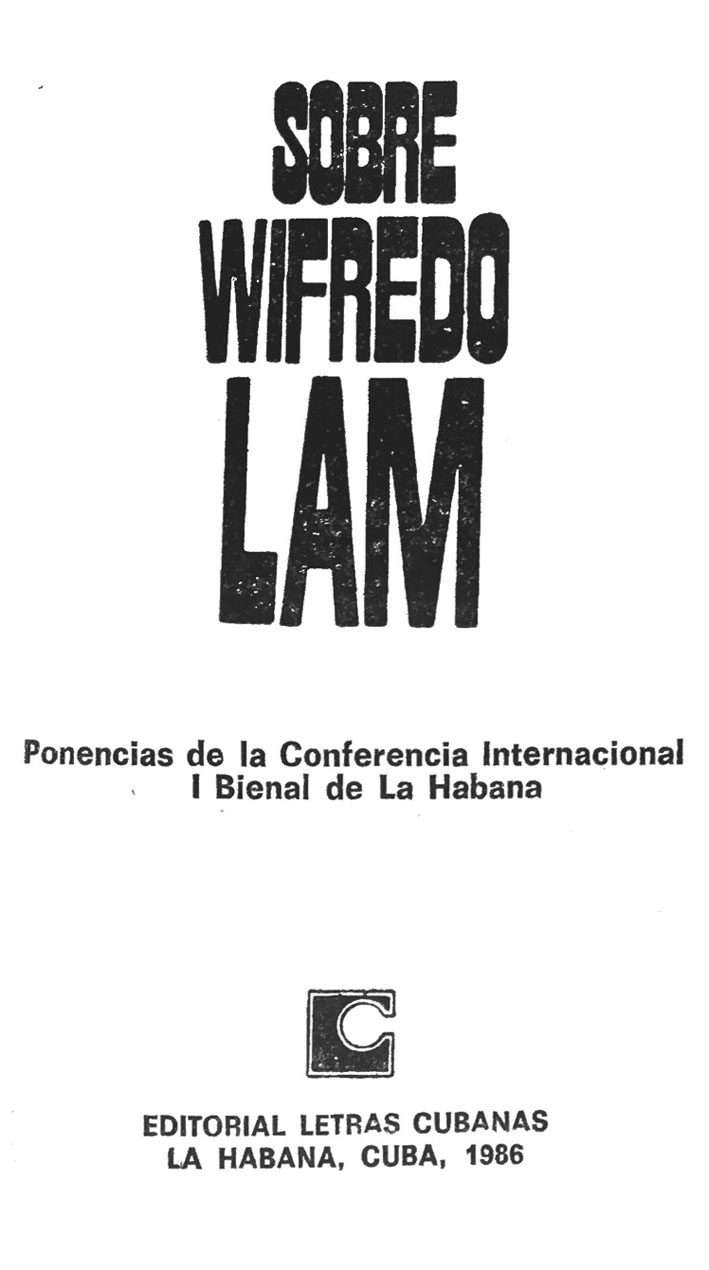 Mainly associated with popular culture, the Afro-Cuban expressions that influenced Lam’s work were frequently relegated to a marginal position in the national arts narrative. Nonetheless, they would play a central role among the artists who started their career in the post-1959 period, such as the young José Bedia. A practitioner of Palo Monte — an Afro-Cuban ritual system that, along with Santería, had a strong influence in the visual arts (3) – the artist made constant references to palero cosmology and iconography in order to construct a singular semantics in his work. (4)

In addition, Bedia’s generation is widely recognised by reassessing national arts and contributing to the emergence of a post-colonial attitude toward Cuban culture. (5) Actively working in the 1980s, these artists made use of concepts such as transculturación, fostered by the anthropologist and writer Fernando Ortiz Fernández, to visually outline a Cuban essence that accounted for non-canonical traditions. For instance, during the third iteration of the Havana Biennial, in 1989, Bedia held a solo show in which he stated his creative process as a transcultural method, “halfway between ‘modernity’ and ‘primitivism’, the ‘civilized’ and the ‘sauvage’.” (6)

It was probably this transcultural stance that led Bedia’s work to be presented in the 6th edition of Dak’Art (2004), as part of the exhibition Retour à Dakar: 3 artistes en provenance des Amériques. Curated by the Brazilian Ivo Mesquita, the show sought to explore the notion of African diaspora in the Americas, including the work of two other artists: Mario Cravo Neto and Odili Donald Odita. In his curatorial statement, Mesquita claims: “In regard to the proposed subject, the African Diaspora, I must admit that artists and their works offer here a different understanding of the cultural practices and theories that approach Africa as an utopy, a territory to be discovered, an endeavor to be realized, a culture to be created […] On the contrary, it is considered here as a cultural matrix, […], the mother who once expatriated in America gave birth to mestizo children.” – Ivo Mesquita

The inclusion of José Bedia in Retour à Dakar, through the bias of the diaspora, intrigues. Of Spanish origin, the artist does not have the African ancestry that supports the rhetorics of return or miscegenation urged by the show’s curator. As he had previously done in the Third Havana Biennial5, Bedia presents in Dakar  a selection of works — including Kiyumba Ndoki and Kiyumba Bafiota (1997) — that make reference to elements arising from his “personal recreation of old ethnographic pictures, specifically from the Congo region and related tribes in Angola and Zambia” (7). Here, the adhesion of Bedia to the diasporic condition does not seem to inscribe itself in the plots of a literal affiliation, but in the artist’s inner experiences that are materialized in these pieces. Therefore, we could assume that Ivo Mesquita was rather guided by biographical and subjective arguments to validate his curatorial proposal for Retour à Dakar.

In his essay The Diaspora as Object (2003), art historian John Peffer points out important questions regarding the discursive and aesthetic uses of the concept of African diaspora in the arts. “Much of the new art seeks to shift the diaspora from a subject-speaking position into an object-in-question” (8), says Peffer. While assuming the condition of object, the notion of diaspora recombines multiple geographic and historical connections, offering “a crucial insight into the current global condition”. But it is not without a loss, since the political implications of the term — originally based on the experiences of forced exile and the commonalities of a shared heritage — are diffused amidst larger discursive frames:

“Currently, the concept of diaspora may be seen to be positioned among an array of such buzzwords as border, creolization, transculturation, hybridity, and so on, all attempting to describe intercultural contact zones and transnational cultures.”, says – John Peffer.

If, in Cuba, the display of Bedia’s work is grounded on the necessity of a dynamic and contemporary view of the Afro-Cuban presence in the island, in Dakar, it encompasses an enlarged perspective of what is considered to be part of the African diaspora. The question is to what extent the malleability of such concepts and their uses by the so-called “global art system” demands more precise frameworks. While inscribing the circulation of artistic practices in their political contexts, the transnational networks that permeate the history of Biennials like Havana and Dakar can shed much light on how concepts are appropriated for the sake of curatorial discourse. As we know, shows of such nature are never isolated events resulting from a single authorial project. They represent, instead, a combination of forces and interests that transcend the art world.

Sabrina Moura is a curator and editor based in São Paulo (Brazil). She is currently a PhD Candidate at the History Department at the University of Campinas.

(5) It is important to stress that Palo Mayombe is not the sole ritual reference in Bedia’s exhibition at the Third Biennial of Havana. There, he also presents works based on Native American’s spiritual practices, among other Caribbean traditions.