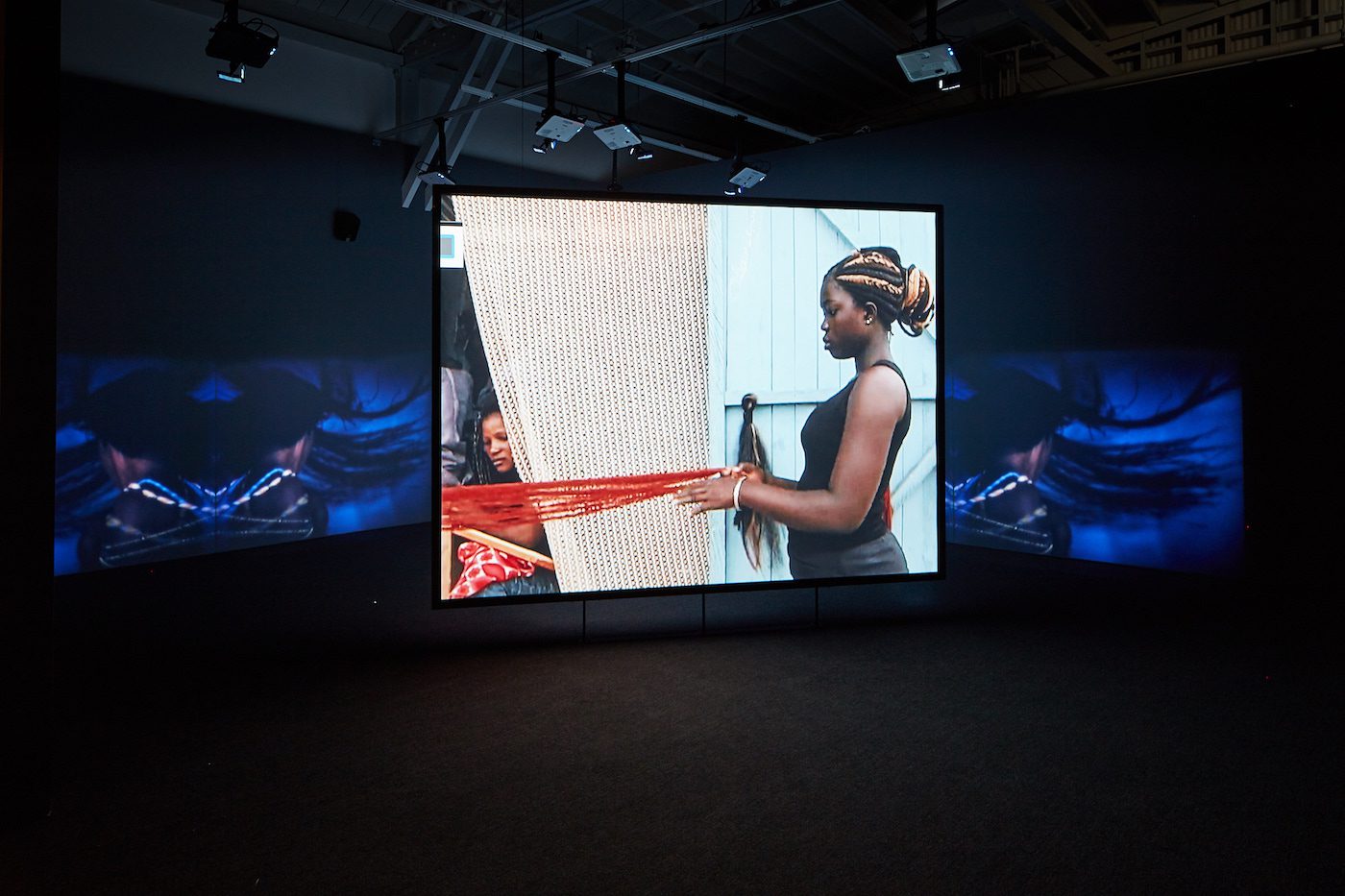 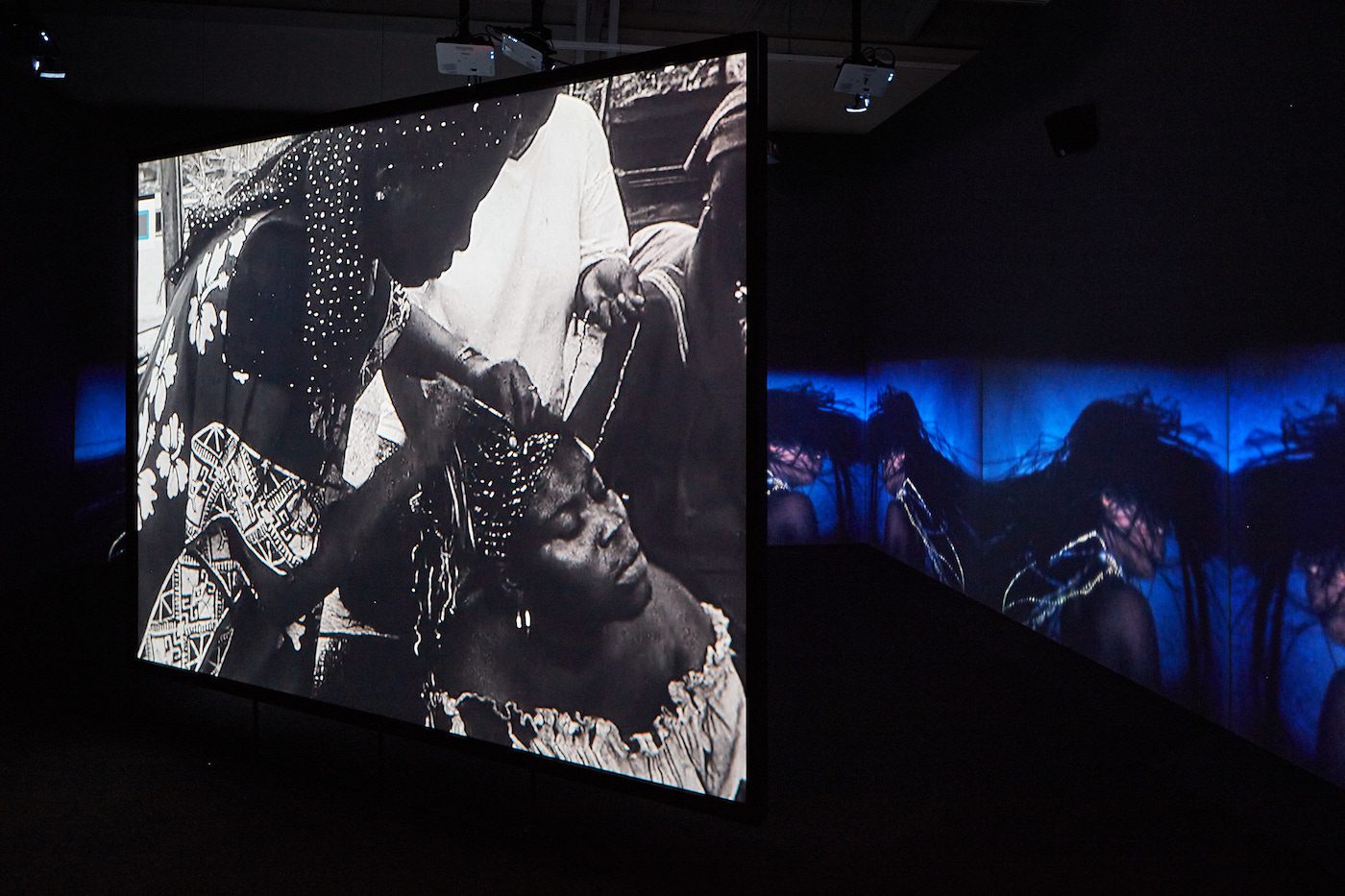 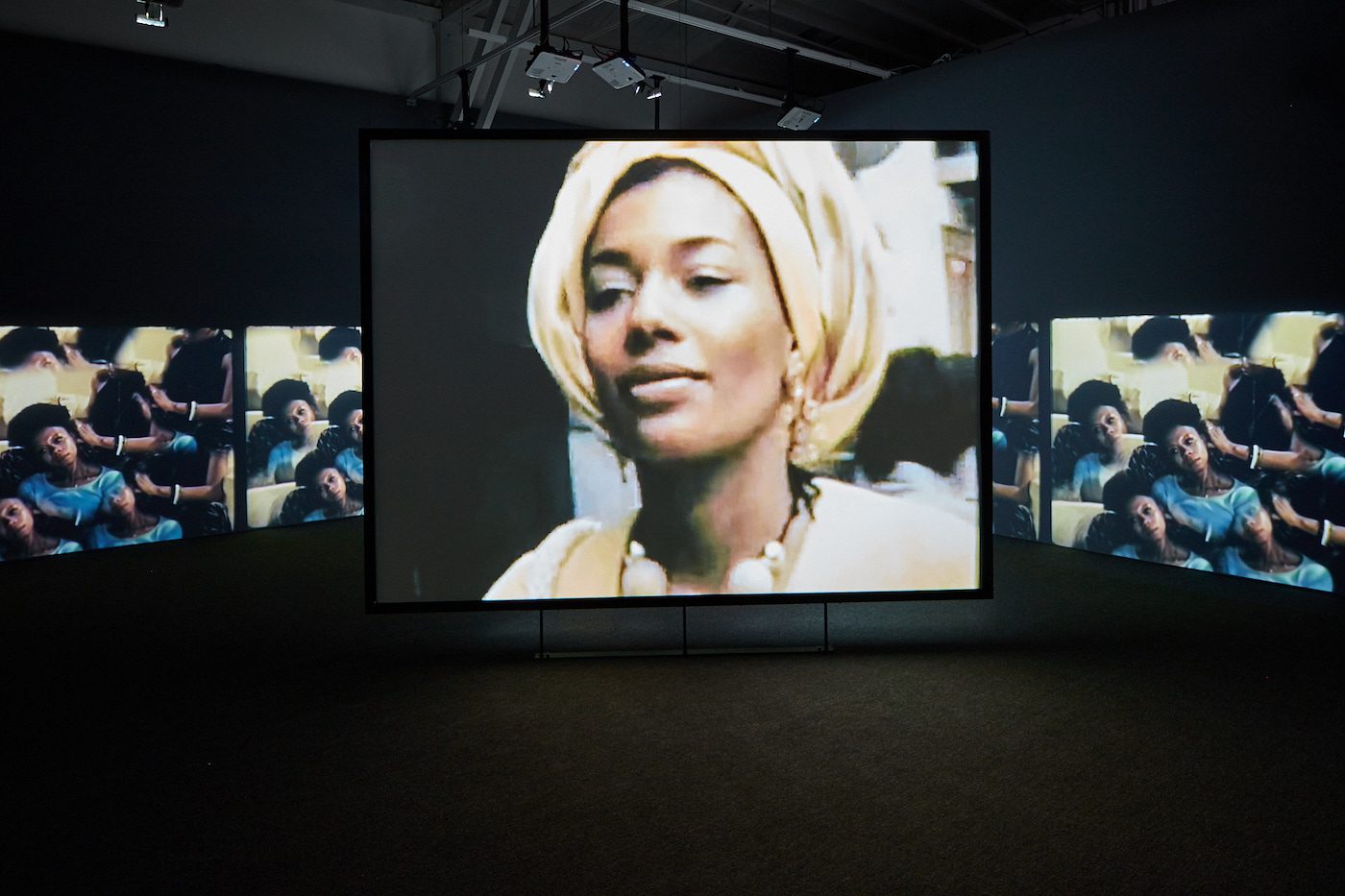 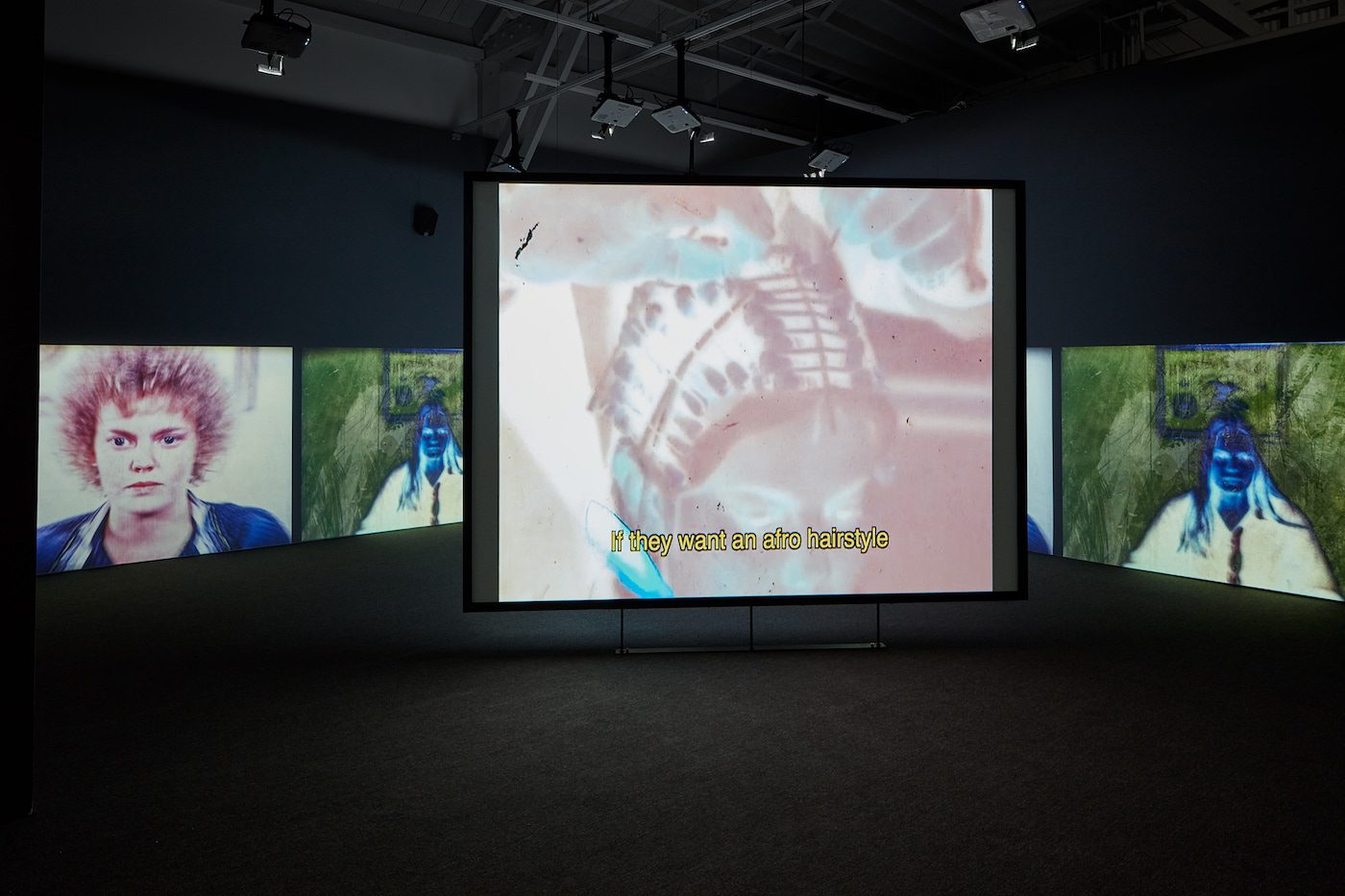 Interweaving different narratives such as hair salon dynamics and fallen celebrities, Akosua Adoma Owusu’s solo exhibition portrays the complexities of Black life. She reflects on personal histories while connecting them to broader political issues in a fast-paced style that re-asserts the significance of the Black body and its interaction in space. This approach is highly informed by the artist's “triple-consciousness” from being an individual between three cultures in the US.

Akosua Adoma Owusu is a Ghanaian-American filmmaker in the broadest sense. She thinks and presents her work in the large scale format that cinema requires. Her subject matter is a hybrid of political and deeply intimate narratives around how we see Blackness and how Blackness is misrepresented, appropriated, and negated. In collage style, she creates stories by mixing local cityscapes with salon interiors and the movement of bodies between those spaces. To see her pieces on display in an institutional environment such as San Francisco’s CCA Wattis Centre for Contemporary Arts, is in opposition to the moments of intimacy captured, such as children falling asleep while getting their hair braided, or a woman sitting in a salon chair in hair rollers. We want to be closer to the screen and the scene, to be a part of the story, touched by the crackle of the audio in Split Ends (2012) which won the Tom Berman Award for Most Promising Filmmaker at Ann Arbor Film Festival or to be a part of the crowd in Pelourinho: They Don’t Really Care About Us (2019).

Owusu has a rigorous practice, one that is evident in her approach to the trilogy: Me Broni Ba (2009), Split Ends (2012) and White Afro (2019). In Me Broni Ba, for example, the stop and start of the action helps us to absorb more detail and more of the complex critique that is created around women’s beauty. One is inclined to take pause and consider the questions she is posing. The narrative of the elevation of European beauty standards over and above those of African and African diasporans is something that is a repeated motif in films made by Black filmmakers (e.g. Kiri Davis’ 2005 short A Girl like Me and Regina Kimbell’s 2008 documentary My Nappy Roots: A Journey Through Black Hair-itage). Within the trilogy, especially Me Broni Ba manages to capture what Maya Deren called “controlled accidents”: the little girl getting her hair braided and falling asleep; babies crying; and roosters crowing. Owusu’s camera is an exigent interloper in these raw domestic scenes that anyone with Black heritage would potentially find familiar.

The more experimental approach Owusu takes with White Afro (2019), the last chapter of the trilogy, is a fitting end to the series. We are drawn into the scenes partly by the PBS (Public Broadcasting Service) style narration and by the mesmerizing re-telling of her mother’s (in her own voice) first-hand experience of learning hair-styling techniques in Alexandria, Virginia, in the South. There is a fascinating interplay of Black identities throughout the trilogy that somehow links them together, despite their very different styles, the connecting threads keeping the stories intact.

The turbulent movement in the camerawork builds a textural masquerade for us to want to be close, but simultaneously distant. Including fallen Black American heroes such as Bill Cosby and Michael Jackson, the exhibition is an interesting mechanism by which we are at once wanting to draw nearer to the action taking place on the screen and are repelled by the choice of celebrity characters. It is a moment for reflection of personal histories, but broader political issues, too. The shakiness of Owusu’s camerawork keeps us connected to her as the filmmaker. Allowing for her “triple-consciousness” with so much of her own body in the work (from behind the camera) amplifying the multi-layered audio, shaky camera and fast-paced animation, she re-asserts the significance of the Black body and its interaction in space. In Pelourinho: They Don’t Really Care About Us she raises the issue of double-consciousness through a letter written by W.E.B Dubois to the Brazilian Embassy, asking why Black Americans were refused entry to Brazil as tourists. This timely re-telling of Dubois’ impassioned missive provides food for thought within this current climate of abuse of immigration rights, women’s rights, and specifically the violation of Black and Brown peoples’ bodies.

Akosua Adoma Owusu (born January 1, 1984) is a Ghanaian-American filmmaker, producer and cinematographer whose films and installation work address the collision of identities, where the African immigrant located in the United States has a “triple consciousness”. Owusu interprets Du Bois’ notion of double consciousness and creates a third cinematic space or consciousness, representing diverse identities including feminism, queerness and African immigrants interacting in African, white American, and black American culture.