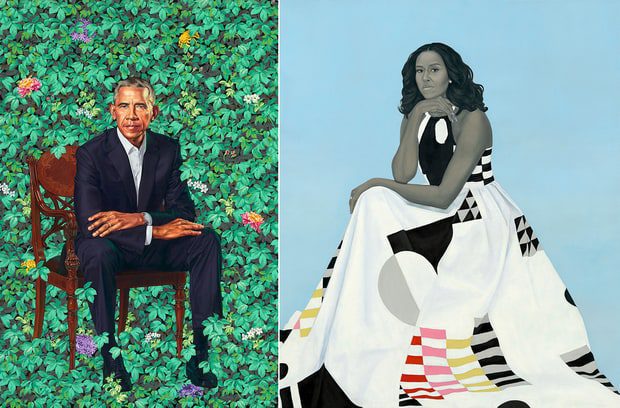 Kehinde Wiley and Amy Sherald are the first African American artists commissioned to paint official portraits of the first couple for the National Portrait Gallery.

The Obamas’ portraits were painted by New York based artist Kehinde Wiley and Baltimore-based artist Amy Sherald. They are the first African American artists commissioned to paint official portraits of the first couple for the National Portrait Gallery.

Over the course of his career, Kehinde Wiley (b. Los Angeles, 1977), whom President Obama selected, has frequently portrayed young African American men wearing the latest in hip-hop street fashion. His rich, highly saturated color palette and his use of decorative patterns complement his realistic, yet expressive, likenesses. The theatrical poses and props Wiley assigns to his subjects make references to iconic portraits of powerful figures by Western artists.

Amy Sherald (b. Columbus, Ga., 1973), who is based in Baltimore, was selected by Mrs. Obama to paint her portrait. Sherald challenges stereotypes and probes notions of identity through her life-size paintings of African Americans. Out of more than 2,500 entries, Sherald’s oil painting “Miss Everything (Unsuppressed Deliverance)” won first place in the Portrait Gallery’s 2016 Outwin Boochever Portrait Competition. Along with the exhibition that showcases all of the winning portraits, the first-place prize includes the opportunity to create a portrait of a living individual for the museum’s permanent collection.

“Kehinde Wiley and Amy Sherald bring tremendous energy and empathy to their portraits, and we are excited to see how that translates to picturing the President and First Lady,” remarked Kim Sajet, the director of the National Portrait Gallery. “In many respects, they are introducing a new chapter in official portraiture by combining the best of the past with pop culture, the hip-hop aesthetic of urban America and the personal stories of the artists themselves.”

The portraits will be on display in the newly renovated “America’s Presidents” Gallery beginning 13th February 2018.