Conference Echoes of the South Atlantic

Ayesha Hameed and the Future – Between Resistance and Destruction

In “Black Atlantis”, artist Ayesha Hameed looks into the possible afterlives of the Black Atlantic: into contemporary illegalized migration, through afrofuturistic dancefloors and soundsystems, and into outer space. We spoke to her about the future as a site of resistance and as a site that is being lost due to climate change.

Contemporary And: What role have Salvador and Brazil played in your work?

Ayesha Hameed: So far I have not made work or done research in Brazil or Salvador. This will be my first visit to Brazil and I am looking forward to learning on my visit. I have been working and writing about histories and materialities of the Atlantic, especially following the middle passage for many years. I am exploring more and more now contemporary connections between West Africa and the Caribbean. The connections of this event to the southern Atlantic are very promising for me.

C&: Why is it important in your work to make a connection to music and sound?

AH: Black Atlantis is a series of live lecture performances. Using Walter Benjamin’s concept of the dialectical image I examine how to think through sound, image, water, violence and history, as elements of an active archive; and time travel as a historical method. A key methodological thread of Black Atlantis is to take the story of Drexciya, an electronic band from Detroit whose mythos, built through liner notes, describe a story where the children born of pregnant slaves and thrown overboard were able to adapt to living underwater as they went straight from living in amniotic fluid to ocean water, and so built a Black Atlantis called Drexciya. 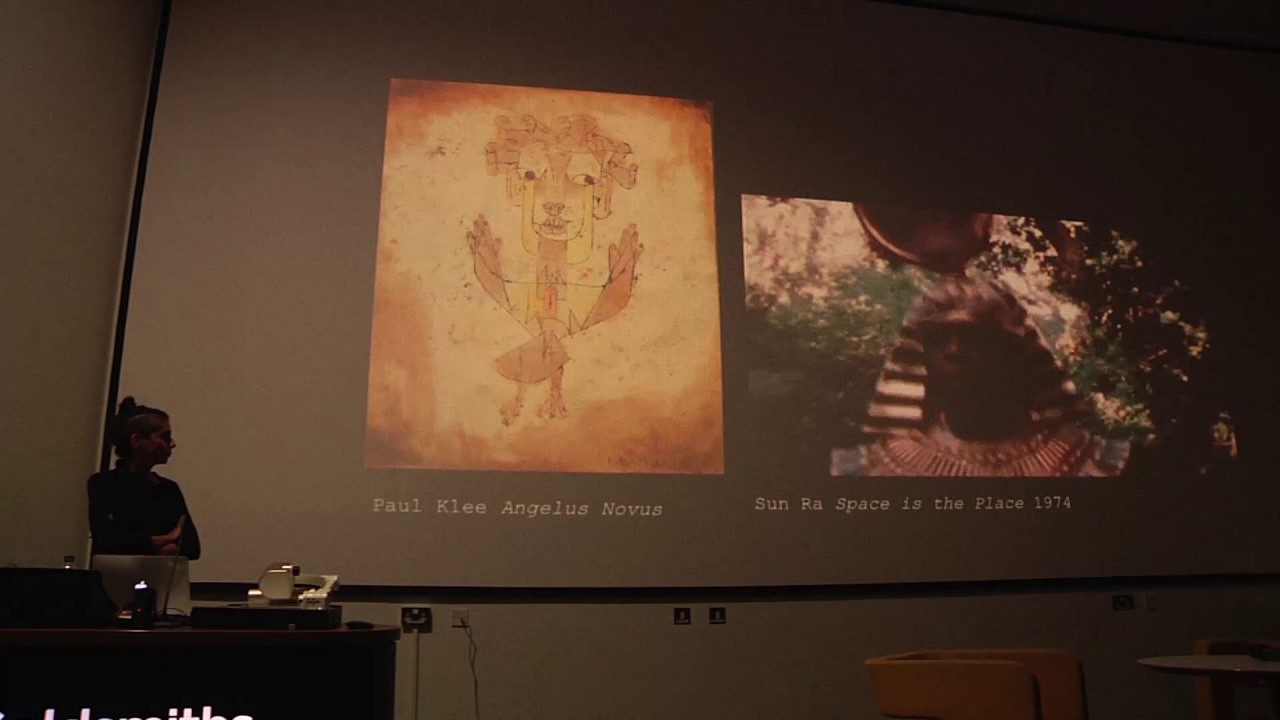 Drexciya’s afrofuturist approach made possible a kind of time travel, so as to make a link to current conditions of migration on the Mediterranean sea. The kind of music that Drexciya makes also opens up how music affects the body, the skin, the inner organs, and their inner historical memories that get activated through music, bass and vibration. This opens up how music operates as a memory machine and centrifugal force that draws remembering bodies together.

C&: What brought you to the connection between Afrofuturism and the Anthropocene? And what are the implications of that awareness in our lives today?

AH: The combination of those two discourses follows the geographer Phil Sternberg’s critique of discourses of the Black Atlantic – which, as he points out, focus on surfaces rather than depths of the ocean. As a result, the wetness of the ocean is lost and thus its haptic tactile quality is lost. When we materialise the ocean, we grow aware of it as an environment – of survival, possibility, but also of its erosion, destruction and of it as a place of death for the enslaved.

Bringing Afrofuturism and the Anthropocene together also opens up two relationships to the future – as a site of resistance and contestation in Afrofuturism; and as a site that is being lost with the crises of climate change. How to think about these two kinds of futures being together and as part of the same struggle? And how to think of the environment as an active witness and character in exploring these violent histories?

Ayesha Hameed is an artist whose work explores contemporary borders and migration, critical race theory, Walter Benjamin, and visual cultures of the Black Atlantic. Recent presentations and performances have been shown at the Institute of Contemporary Art in London, The Showroom, the Oxford Programme for the Future of Cities, the Haus der Kulturen der Welt and the Edinburgh College of Art.

What is the future of the Southern Transatlantic relations, particularly concerning the past, present and future role of Europe? These questions will be discussed in this Conference Echos of the South Atlantic, which will take place from 23rd to 25th April, 2018, in Salvador da Bahia, Brazil.

More information about the conference: https://www.goethe.de/ins/br/en/kul/sup/echoes.html