Amina Lawal Agoro looks on the event that reinvigorated Dakar’s art scene during one of the most difficult years for cultural life.

The year 2020 was one many were glad to be rid of. For much of it the Senegalese art world struggled under the malaise of the ghost of the biennial that was not. The forced cancellation of Dak’art, the country’s biennale platform which has been a constant fixture in the international biennale calendar for close to thirty years, left artists and art organisers in a bind. Amid the disruptions of the covid-19 pandemic, it is Partcours – an art platform formed in 2011 with a local focus – that has reinvigorated a largely dormant local art sector.

With a record twenty-five art venues participating, the ninth iteration of Partcours bucked the global trend and opened its IRL programme in late November with an accumulated energy – inherited from a ghost biennial and the launch of several new art venues – that was explosive. This brought with it a quality of presentations, more world class venues, and a more international flavour than in previous years. 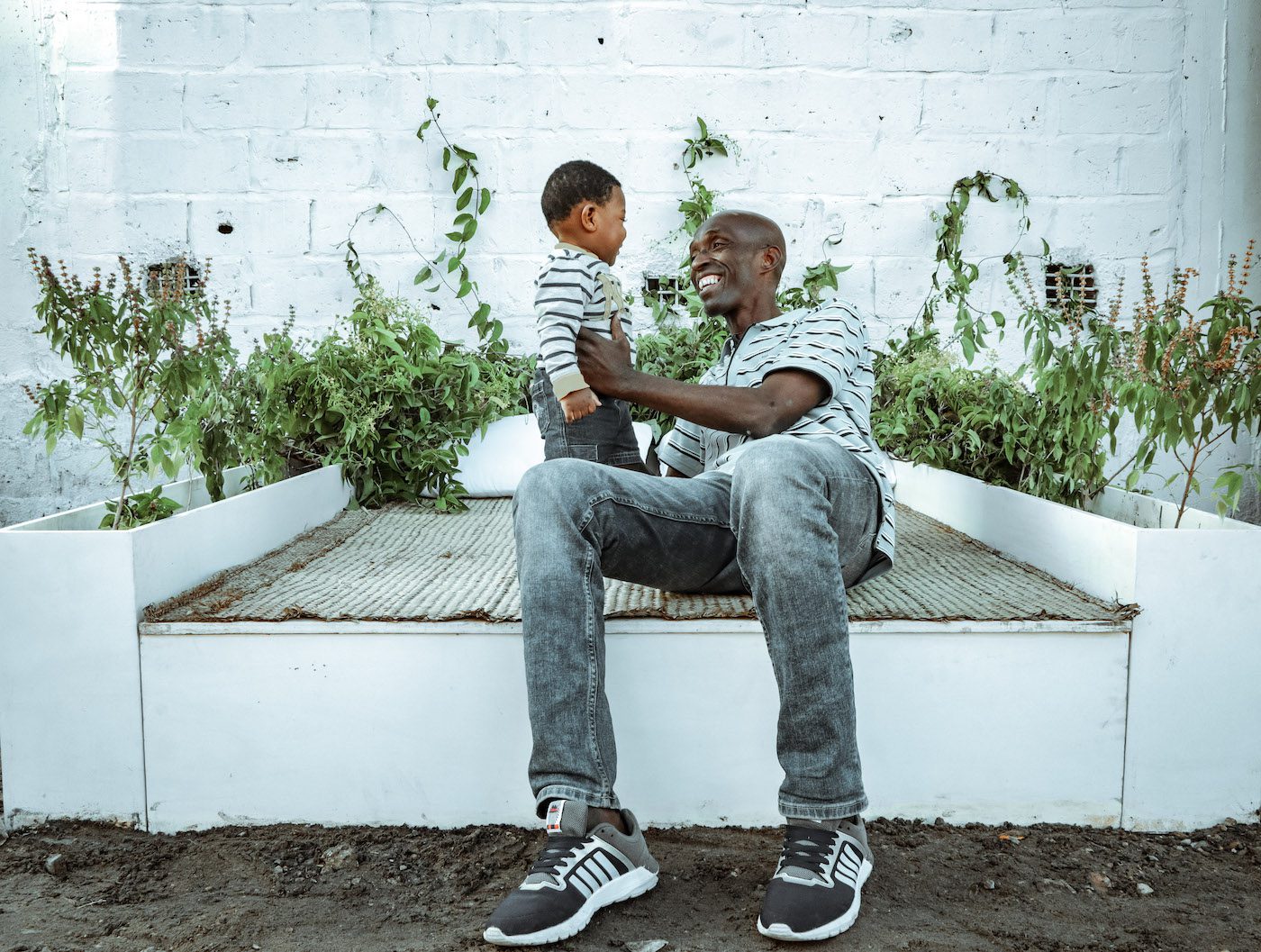 Aliou Diack, Bed of Life, 2020. Installed as part of the Laborotoire Agit’Art presentation “Contamination”, which takes its art installations onto the streets, with the aim of ‘contaminating’ the people with a new vision of care for their environment.

Conceived by Koyo Kouoh (Director of SA’s Zeitz MOCAA) and Mauro Petroni (founder Atelier Ceramique Almadies), Partcours centres “the work of local art institutions that are the fabric and foundation of the art ecosystem in Dakar” and stands in opposition to popups, explained Kouoh.

Each year Partcours brings together several of these institutions in a federation, spreading exhibitions across the urban sprawl and suburban contours of Dakar and through architecturally significant buildings. As an urban cartography, it offers an alternative biography of the city through its art spaces.

The platform is commendable for its spirit of collective organisation that does its part to stem the lull that often characterises the local art scene following the departure of the biennial crowd. The inclusion of five new venues in this year’s programme greatly advanced the cause of Partcours by injecting new energies and new visions. 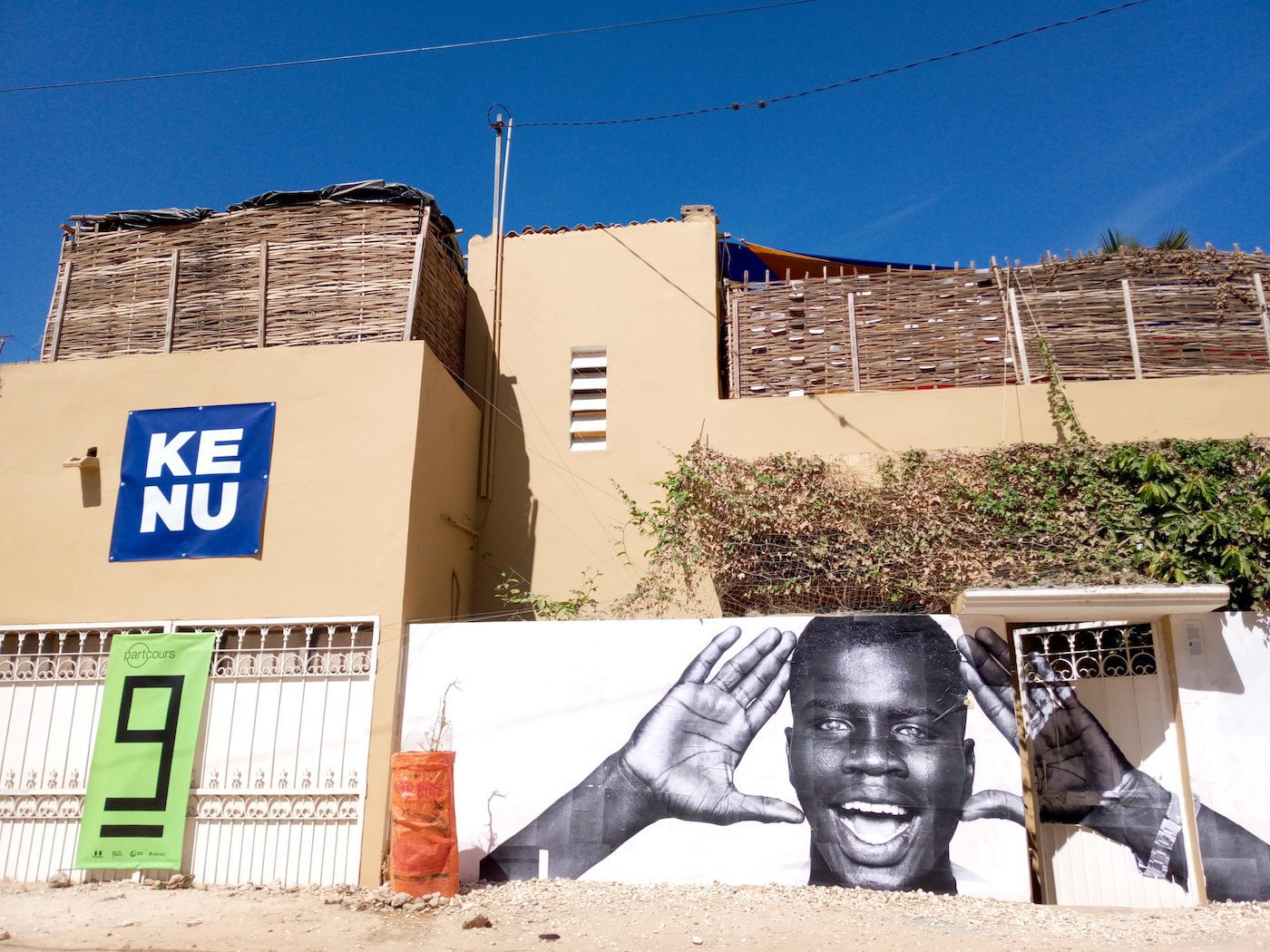 Kenu -LAB’Oratoire des Imaginaires building facade. Originally the studio of co-founders Alibeta (pluridisciplinary artist, filmmaker and musician) and Ibaaku (electro musician) the building was converted into a project space and opened to artists, researchers and the community. Image courtesy of Kenu Lab.

Perhaps most compelling of the new spaces, in terms of immersion in neighbourhood and commitment to proposing new ways of doing by placing art and culture at the service of the community, is KenuLab. Artist-led and research led Kenu’s dense presentation adopts a polyvalent approach to create interactive moments that go beyond “the spectatorship and the constructed narratives associated with traditional white wall spaces.”

Kenu sits alongside existing initiatives such as Espace Medina, Laboratoire AGIT’Art and more recently Yataal Art, whose models are deeply embedded in the neighbourhood and local culture in which they are situated.

On the opposite end of town in the central district, a gigantic spiral staircase in a 1950s modernist building welcomes the public to Selebe-Yoon, the 1000-square-metre art venue founded by Jennifer Houdrouge. The central stairwell is regaled with a cascading textile work that announces Alioune Diouf’s solo show, Ubeku (Opening). Diouf has created a body of work that is accomplished, and one has the sense of an artist speaking authoritatively in his own voice.

The scenery of Partcours was much improved by the inclusion of these new venues, which includes Espace Trames, OH Gallery, and Studio Quartorzerohuit. The latter emerges from collector Oumar Sow’s efforts and aims to bring art and design together in a space of collaboration and research. 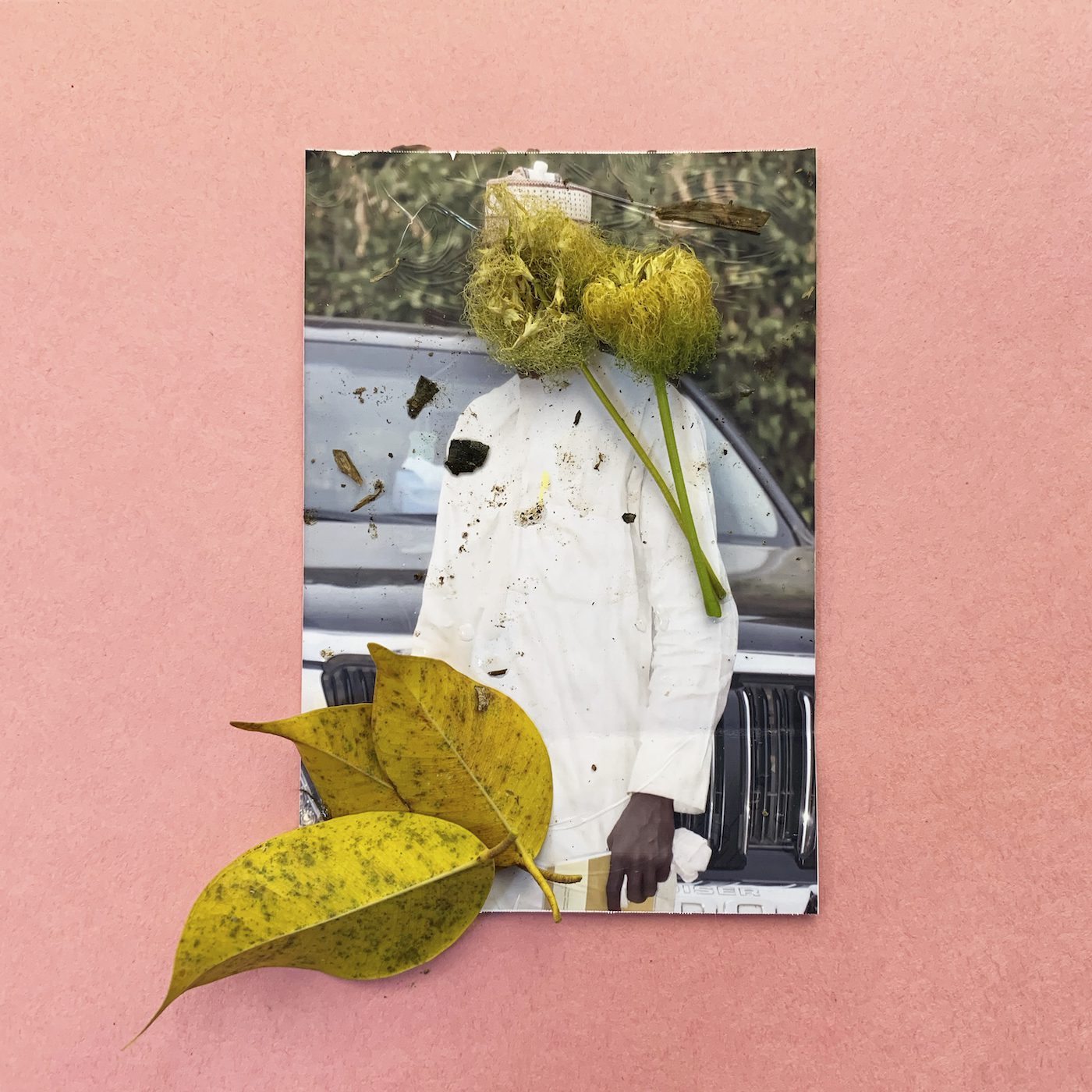 OH Gallery, alongside Gallery Cécile Fakhoury onboarded the Dakar gallery scene in the last three years. The former, founded by Océane Harati, has been making its contribution to the “structuring and development of the Senegalese market by facilitating acquisitions” – a difficult undertaking given the relatively small collector base, and history of non-exclusive artist-gallery arrangements.

‘I have this memory, it is not my own’, the tightly curated show at Cécile Fakhoury, stands out for honouring and coalescing the work of five female voices, allowing each narrative to dialogue on issues of historical and personal magnitude. “The gallery is working towards a more diverse representation; we are lacking female artists” said director Delphine Lopez.

Amid the newness sits those initiatives that have a longer history.

Aissa Dione, the textile designer and founder of Galerie Atiss Dakar, is amongst the names that have built the culture of contemporary art in Dakar. Her gallery presented Résonances, bringing together veteran Senegalese artist Serigne Mbaye Camara and Elolo Bosoka (Ghana). The exhibition and accompanying artist talk (with a Zoomed-in visit with Italian art critic Bruno Cora), makes connections with a style of social-object experimental artmaking coming out of the art school at Ghana’s KNUST, the art of Récupération (recycling) emerging in 1960s Senegal and the Arte Povera movement in Europe. 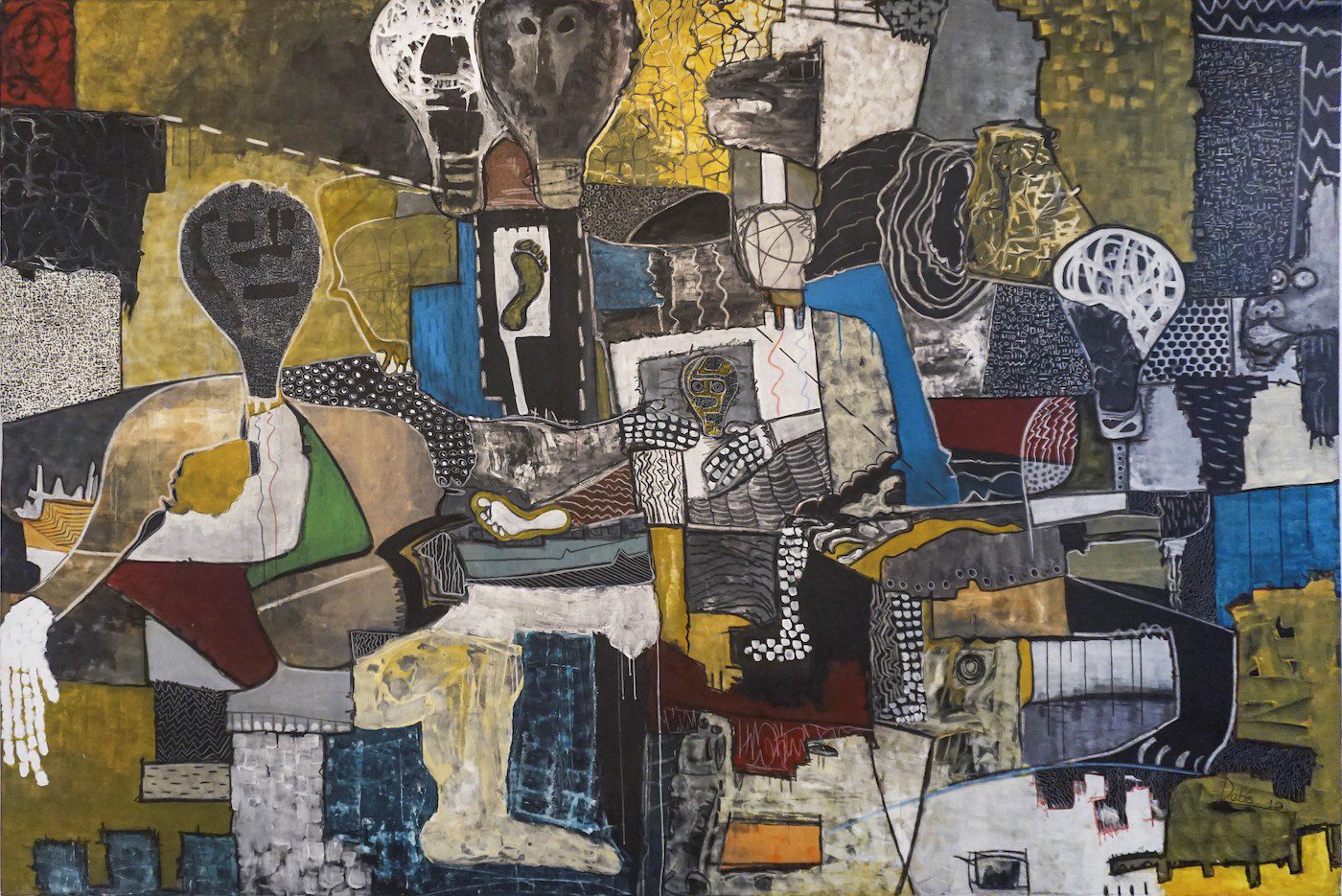 RAW Material Company, the place of art and discourse founded by Kouoh ten years ago, lived up to its reputation of intellectually engaging with the substance of what is behind artistic practice. The images in D’une rive a l’autre (From shore to shore), the exhibition of photographer Ibrahima Thiam, hold a striking surrealistic quality that probe the place of water divinities within the local imaginary and the triangular relationship formed with nature.

In the Medina district, Le Loft – the outdoor annexe to photographer Antoine Tempe’s studio – presented Latent Frames, a brilliant experimental video installation by Tiziana Manfredi and Marco Lena. Historical and rhythmic, the installation draws the viewer in to an encounter with some fundamental moments in the history of Senegal and Africa generally. The accompanying soundscape mirrors the visuals in its adoption of aesthetical and historical references that convey a sense of the euphoria and optimism of the independence era. 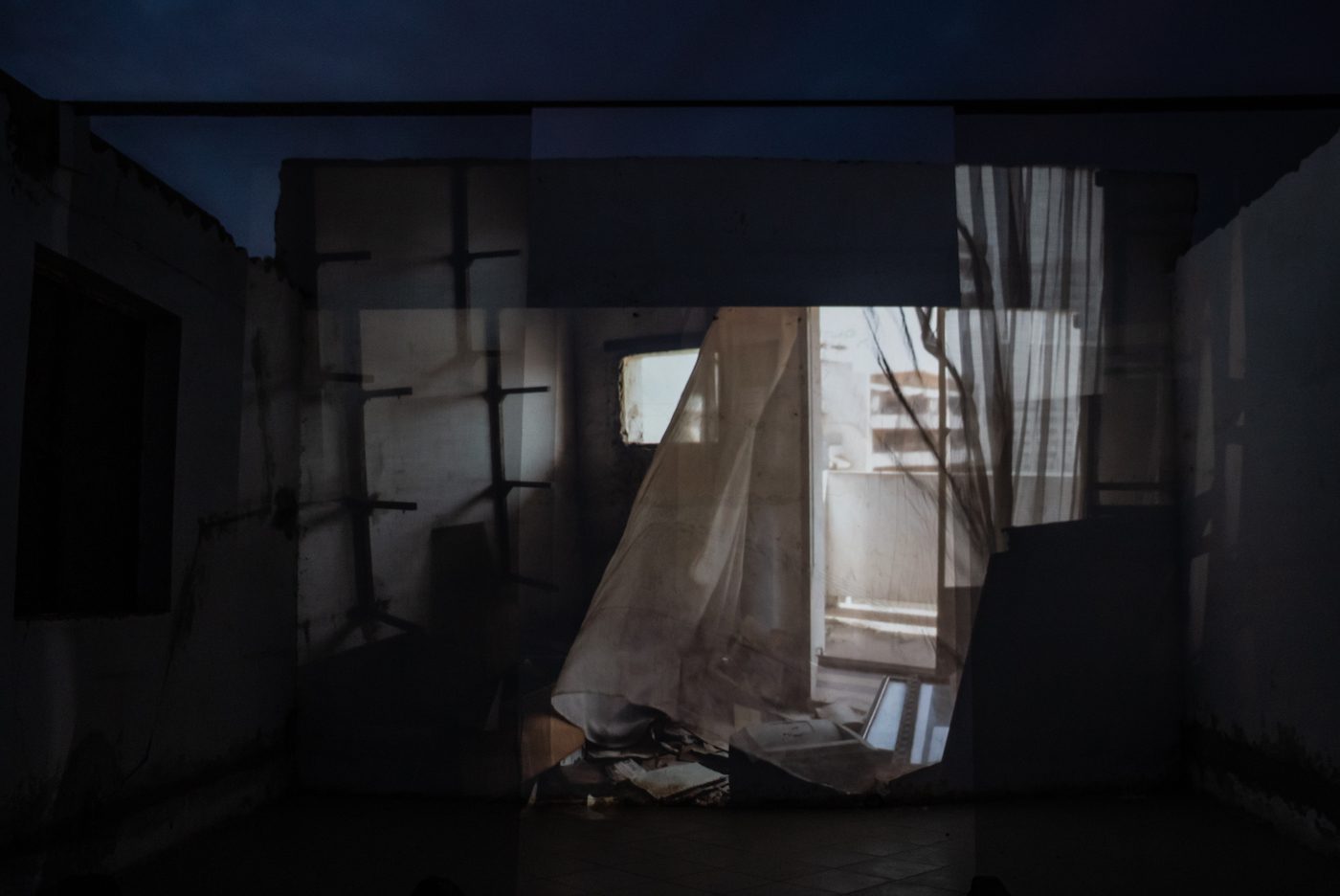 Latent Frames, installation view at Le Loft Dakar. The video is part of an important audio-visual archive and restoration project organised by the Senegalese Ministry of Culture.

Surveying the propositions for Partcours 9, the confluence of multiple crises that swept the globe in 2020, appear by and large to have missed the shores of Dakar, save for its obvious echoes in Contamination, the collective show of Laboratoire AGIT’Art.  In the absence of an overarching curatorial frame, the content of the presentations bear witness to one of their own making: artistic content is rooted in local imaginaries.  Spirituality, local cosmogony, and community take precedence, flirting with art and artistic practice. From Ibrahima Thiam’s photography that draws connections between a retreating way of life and environmental degradation; to KenuLab’s re-linking of art and life using the cultural and spiritual specificities of the society itself; to the Sicapois Portraiture series – photographer Malick Welli’s show at Ker Thiossane – which roots itself in the specificity of the migratory Cape Verdean community within a specific neighbourhood of Dakar.

Rather than a disconnection from the world these narratives are connected to a global crisis, but harness local nomenclature and metaphor, making them more connected to this lived reality.  The message aligns with calls from elsewhere, of a re-articulation of cultural patrimony (with its encoded lessons about community, healing, and human connection with nature) as sources of material to found new worlds or at least correct existential pressures of our time rooted in the neo-liberal capitalist framework.

This centring of the local is the raison d’être of Partcours, in contrast to more international frameworks for reading the contemporary.  The pandemic is rendering much online.  Perhaps Partcours foretells the shape of things to come for the global art world.

Amina Lawal Agoro is an independent researcher and cultural producer. She lives and works between Dakar, Lagos and London.