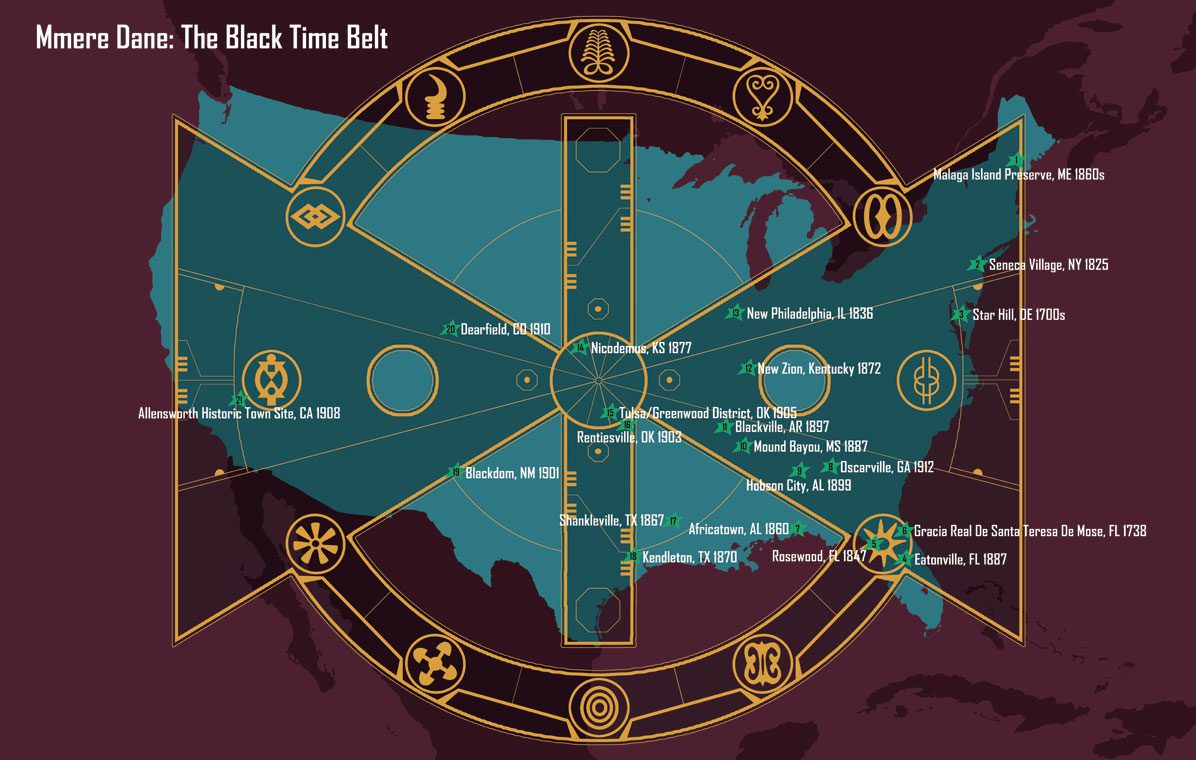 ifa presents a new major commission by Rasheedah Phillips (Black Quantum Futurism) as part of the constantly growing web-based project ARE YOU FOR REAL, which started in 2020.

The artwork entitled Mmere Dane: Black Time Belt maps several historic all-Black towns and Freedom Colonies around the United States, many destroyed by displacement, development, racist violence, and environmental injustice. The site functions as a speculative archive of an alternative past-present-future where all those towns survive and form a network of Black temporal zones—or a Black Time Belt—protecting their communities from the impacts of temporal oppression, namely unhealthy measures of time as linear and progressive. Mmere Dane: Black Time Belt evades linear progressive histories and the legacies of spatial displacement of Black communities, allowing for a transcendence of space-time, and demonstrating potent examples and possibilities for Black land sovereignty, self-governance, temporal autonomy and spatial agency. “Mmere Dane,” an Adinkra symbol meaning “time changes” or “times change” in the Akan language, signifies the dynamic nature of change and the temporary nature of any state of events.

Rasheedah Phillips is a US-based queer housing attorney, parent, and interdisciplinary artist whose writing has appeared in Keywords for Radicals, Temple Political & Civil Rights Law Review, The Funambulist, e-flux Architecture, Recess Arts, and more. Phillips is the founder of the AfroFuturist Affair, a founding member of Metropolarity Queer Speculative Fiction Collective, cofounder of Black Quantum Futurism (BQF), and cocreator of Community Futures Lab. As part of BQF and as a solo artist, Phillips is currently a CERN artist-in-residence, a Vera List Center Fellow, and a Knight Art + Tech Fellow, was formerly a Pew fellow and A Blade of Grass fellow, and has exhibited, presented, been in residence, and/or performed at the Institute of Contemporary Art and the Serpentine Gallery in London, the Metropolitan Museum of Art in New York, the Philadelphia Museum of Art, Red Bull Arts, Chicago Architecture Biennial, Manifesta Biennial, and more.

Initiated by ifa and curated by Julia Grosse, Paula Nascimento, and Yvette Mutumba, ARE YOU FOR REAL launched in December 2020 and is conceived as a participatory project testing interactive artistic practices. It brings together artists, researchers, filmmakers, writers, and coders to create new works, each offering a different understanding of and approach towards the concept of “reality.” It is about engaging with and visualizing the connections between people, thoughts, things, and places that occur through the trading and training of data. It addresses the material and immaterial aspects of the digital, and how both are perceived from the perspectives of various disciplines.

ARE YOU FOR REAL aims to create an international cultural exchange as well as a contemporary co-creative practice of exhibition-making. The artworks produced change over the course of the project, as new artists join and take over, add and react.

The ARE YOU FOR REAL website is designed and developed by Yehwan Song.

About ifa
ifa (Institut für Auslandsbeziehungen) is Germany’s oldest intermediary organisation for international cultural relations. It promotes a peaceful and enriching coexistence between people and cultures worldwide. ifa supports artistic and cultural exchange in exhibition, dialogue and conference programmes, and it acts as a centre of excellence for international cultural relations. It is part of a global network and relies on sustainable, long-term partnerships. It is supported by the Federal Foreign Office of the Federal Republic of Germany, the state of Baden-Württemberg and its capital Stuttgart.