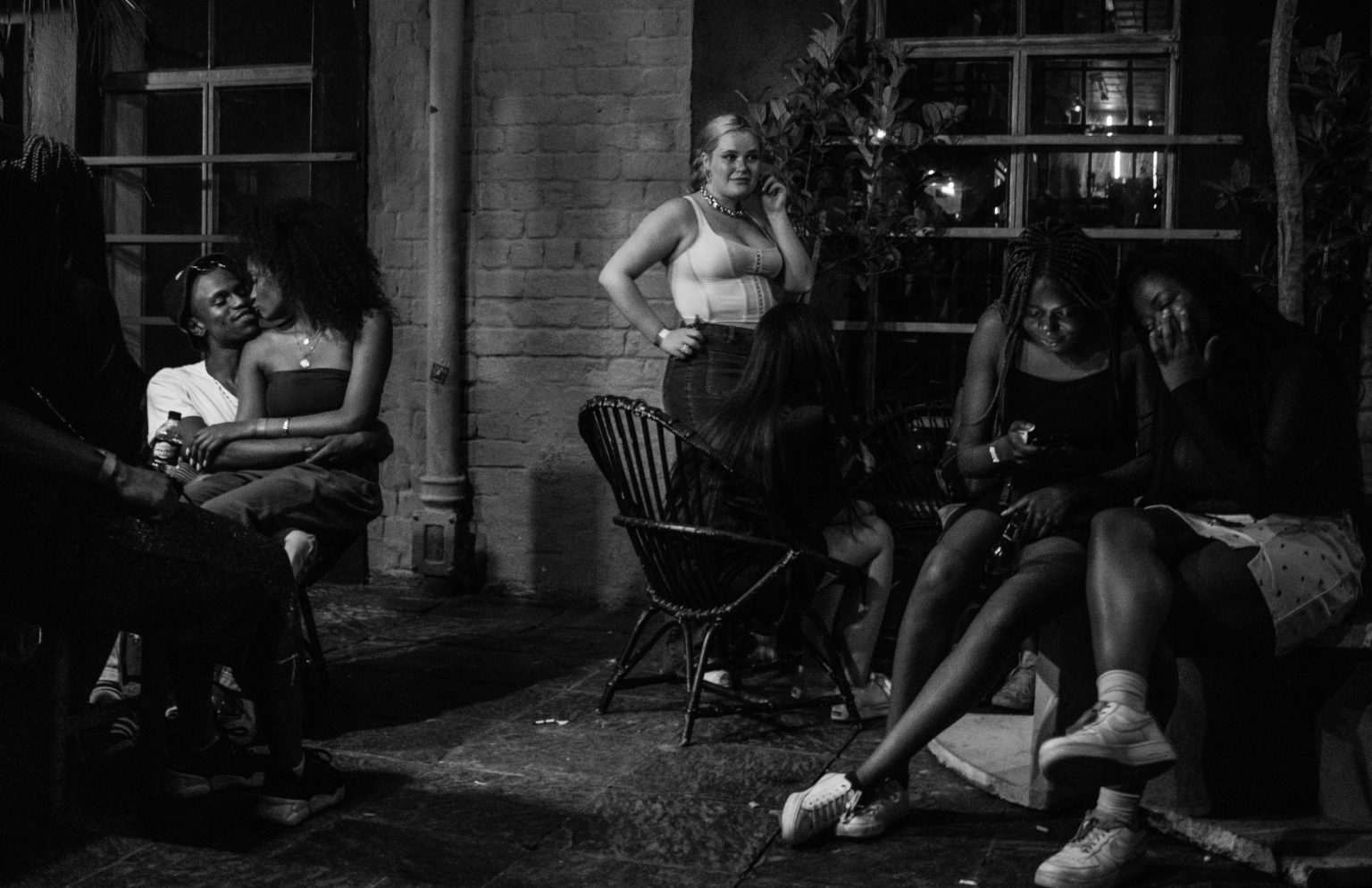 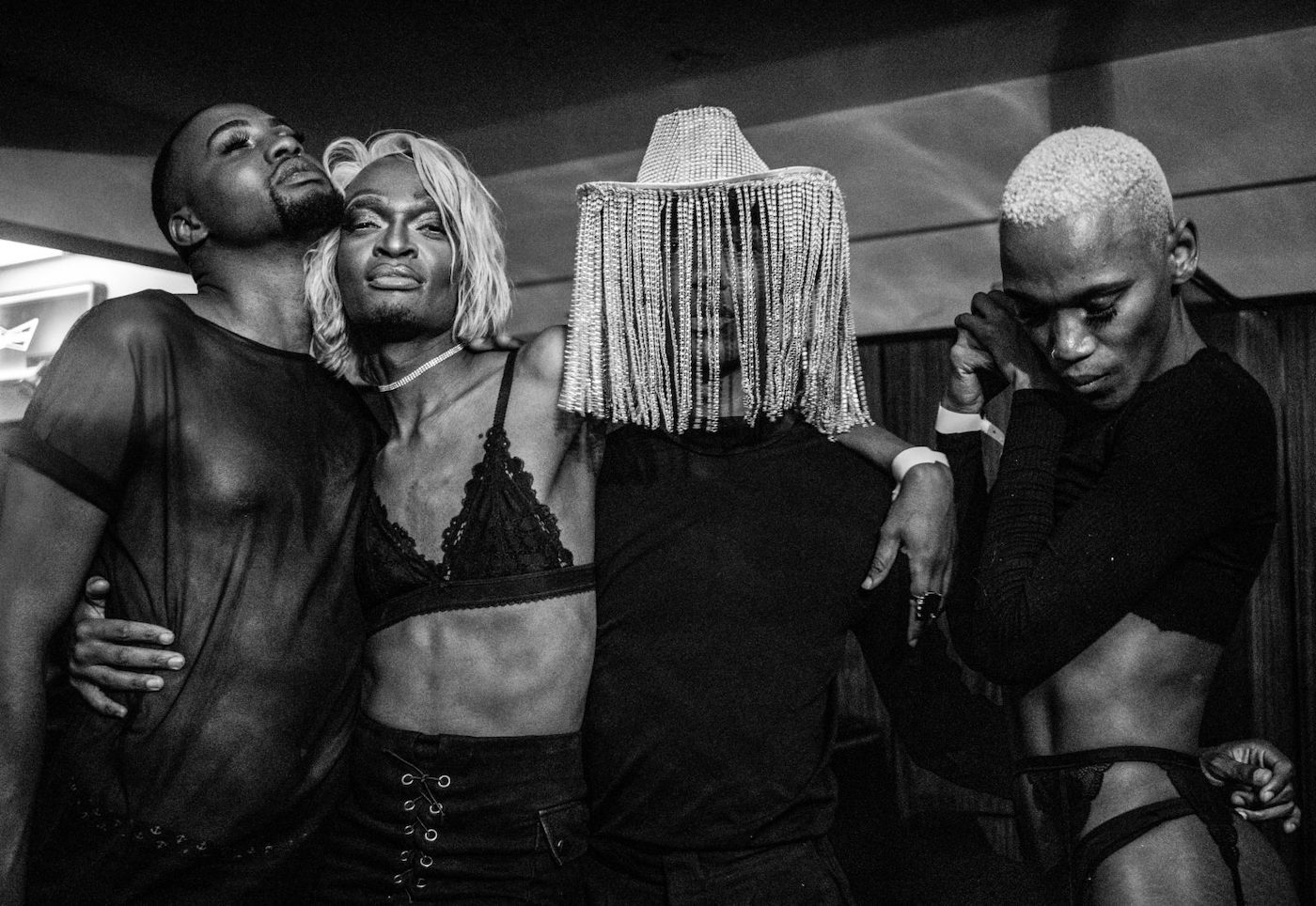 Andymkosi, Between Sisters, 2021. 25 OCTOBER 2019 : A day before the Johannesburg Pride, Le Grande hosted a Festish Ball with various categories for the queer community to parttake in at the Tennis Club. Courtesy of the artist. 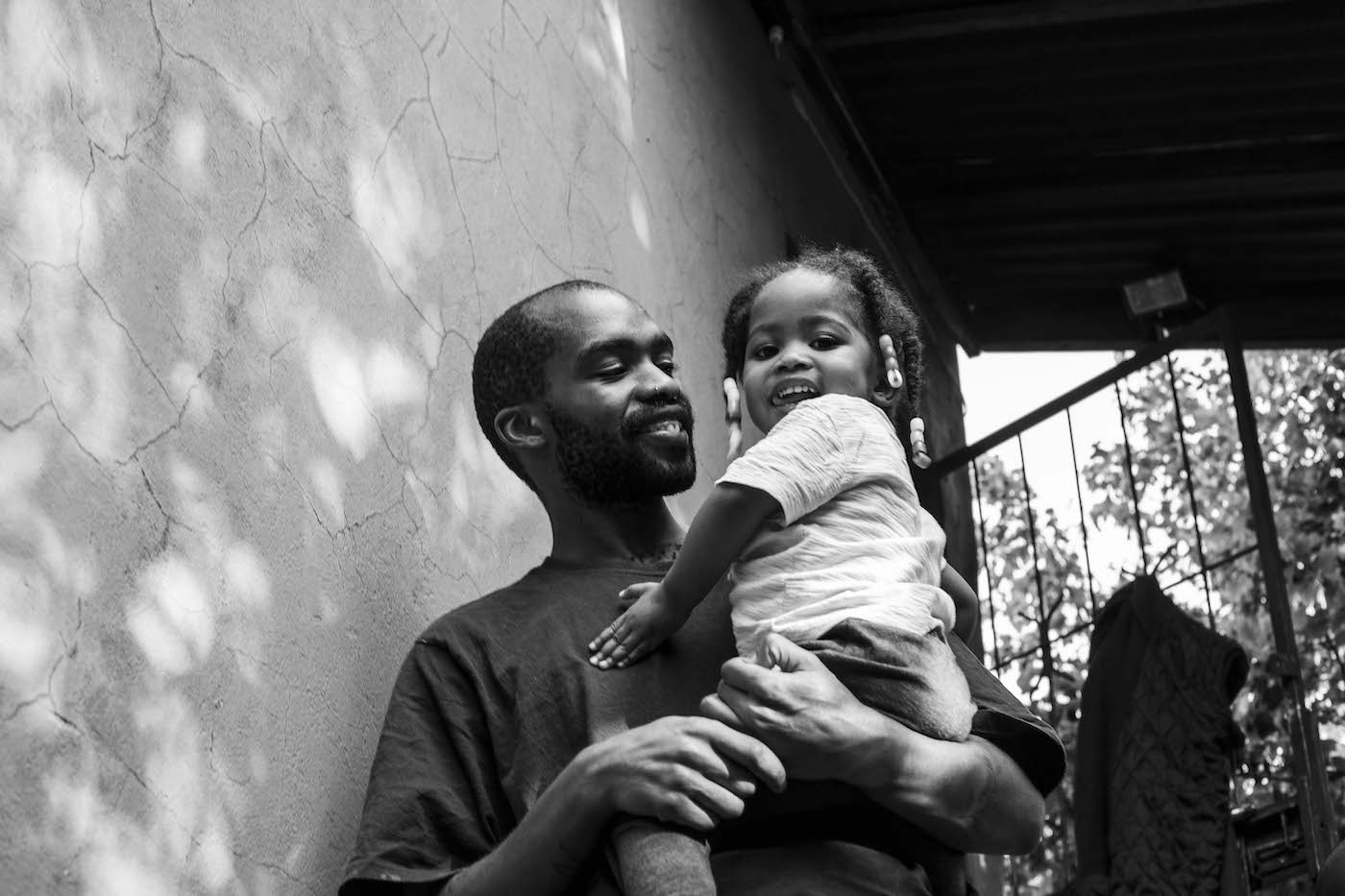 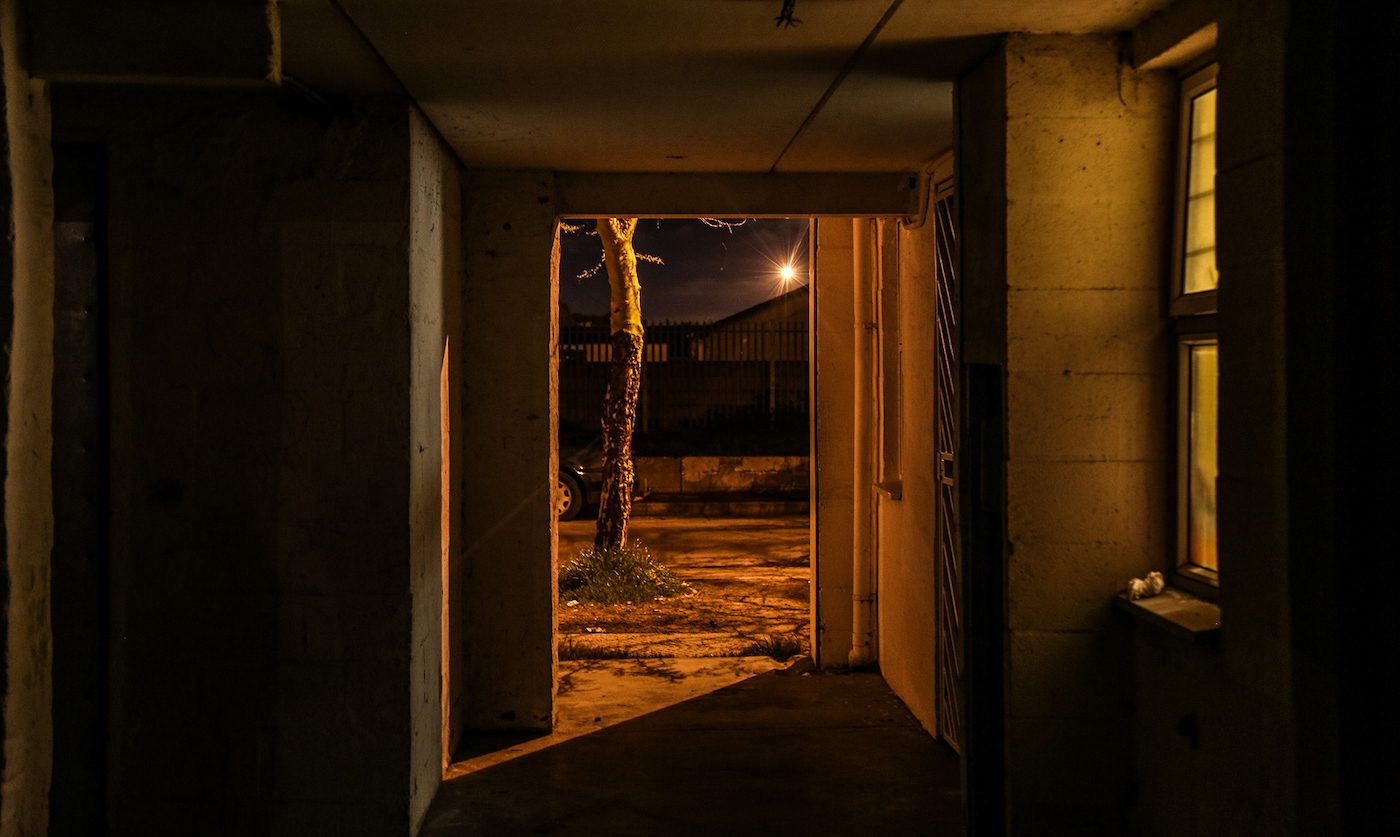 Andymkosi, N2 Gateway at Night, 2019. Courtesy of the artist. 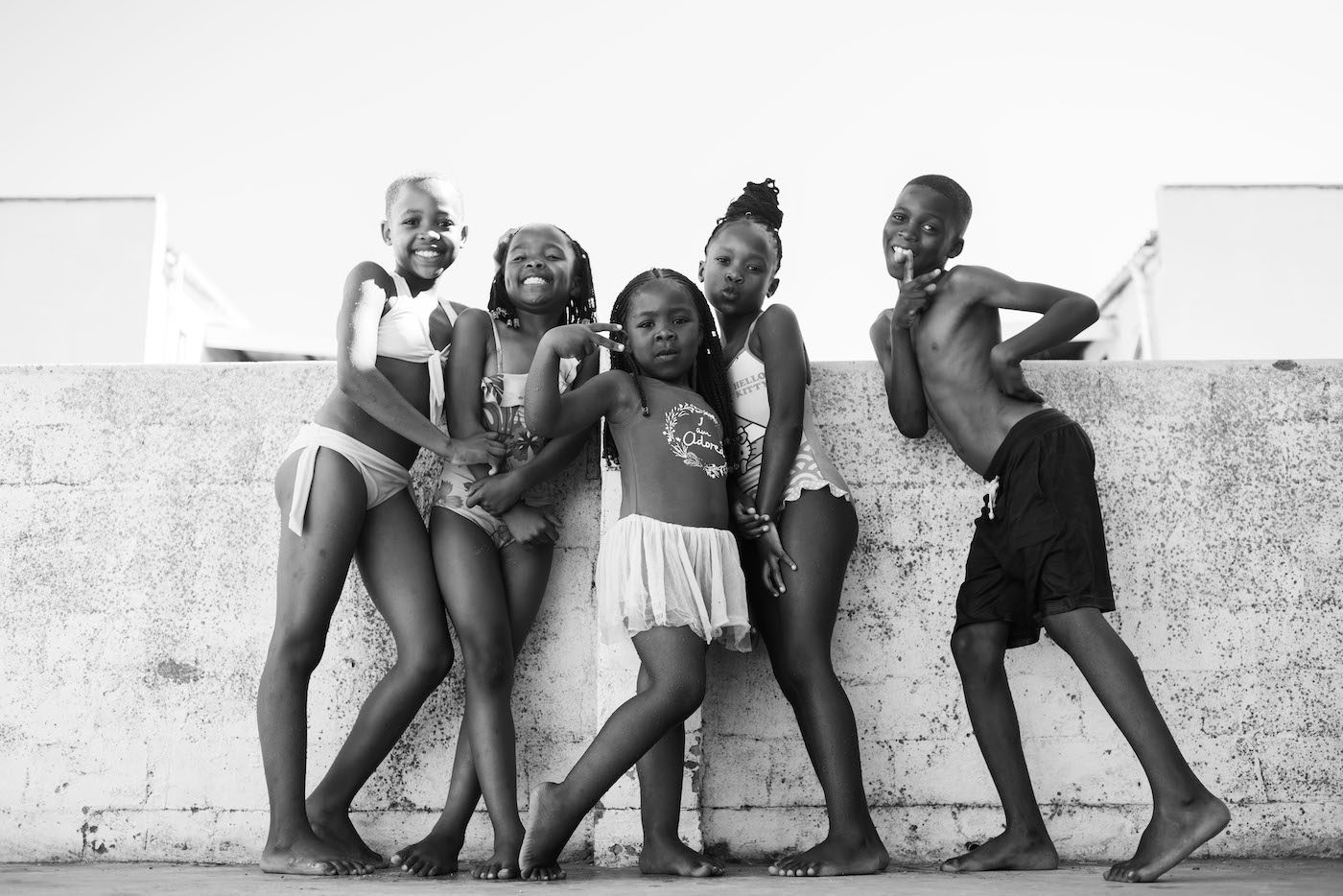 Andymkosi , Kids swimming at N2 Gateway, 2021. Courtesy of the artist. 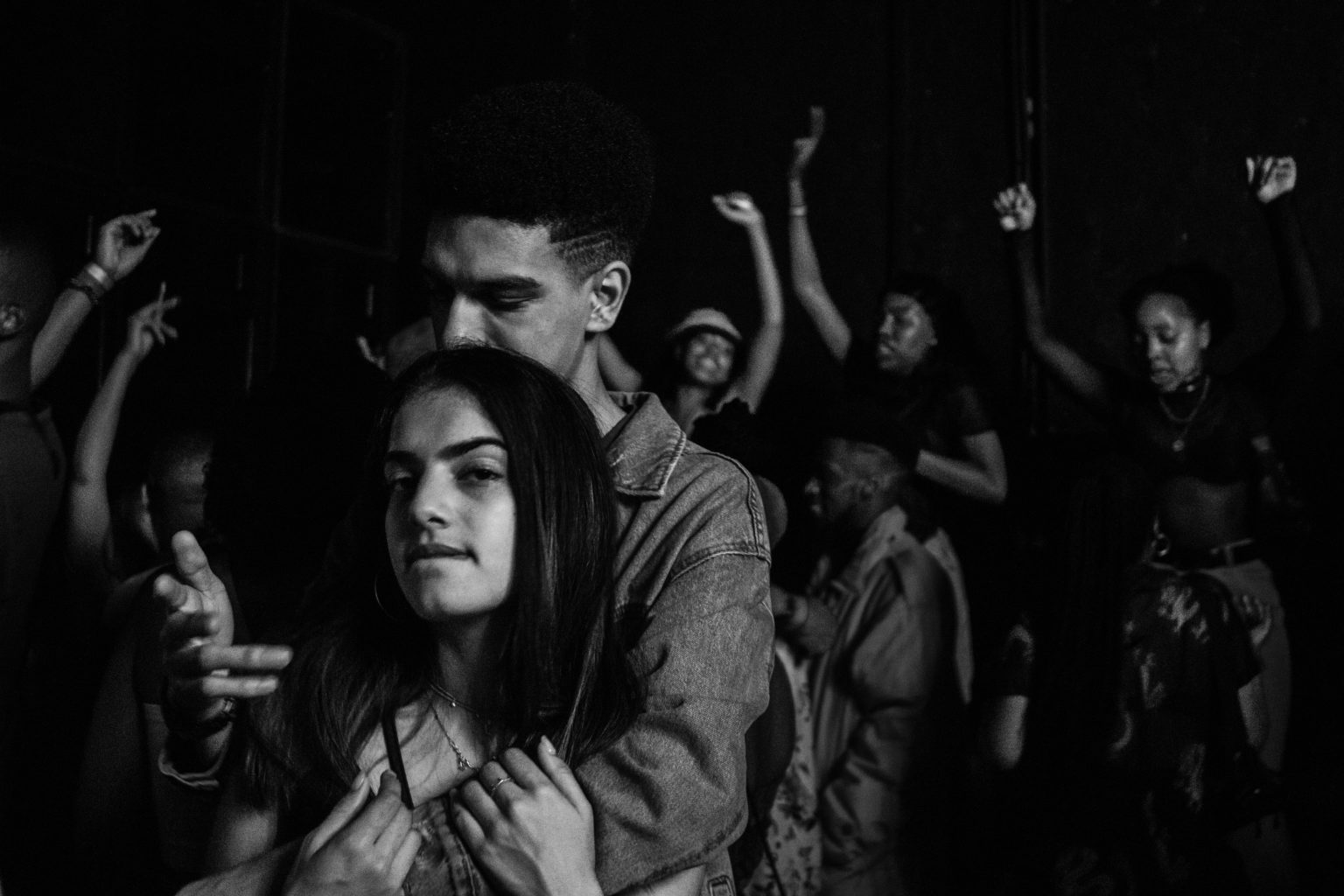 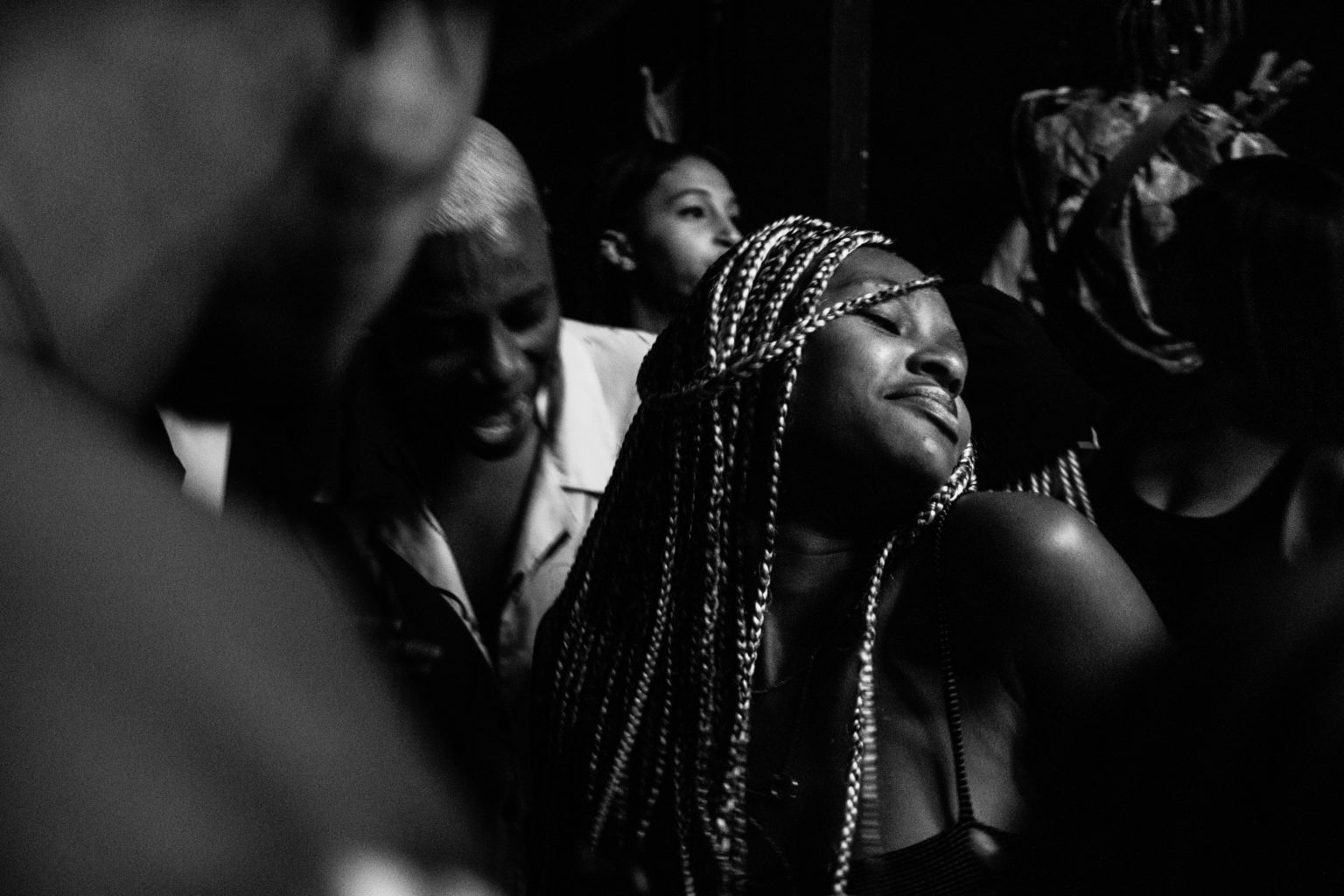 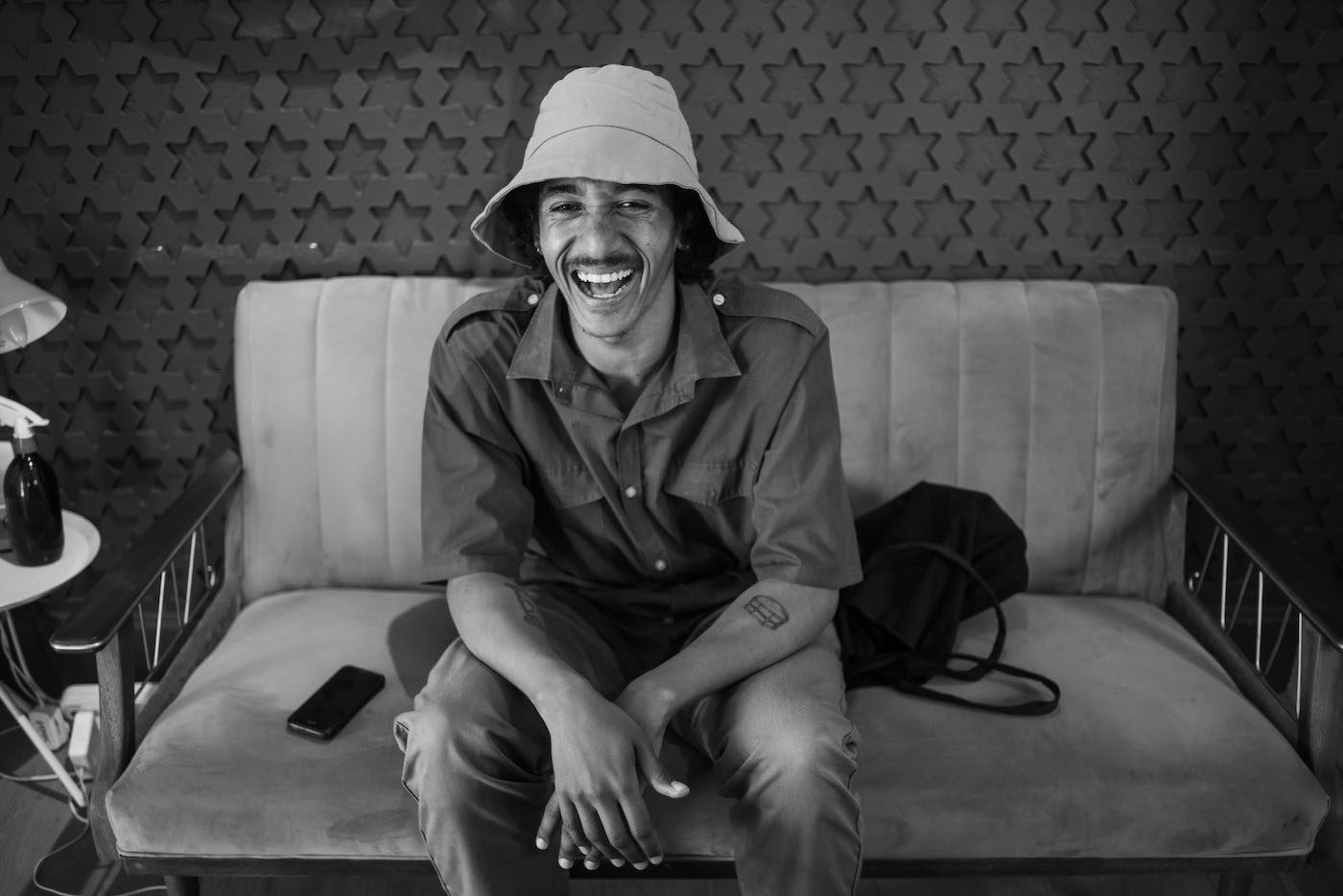 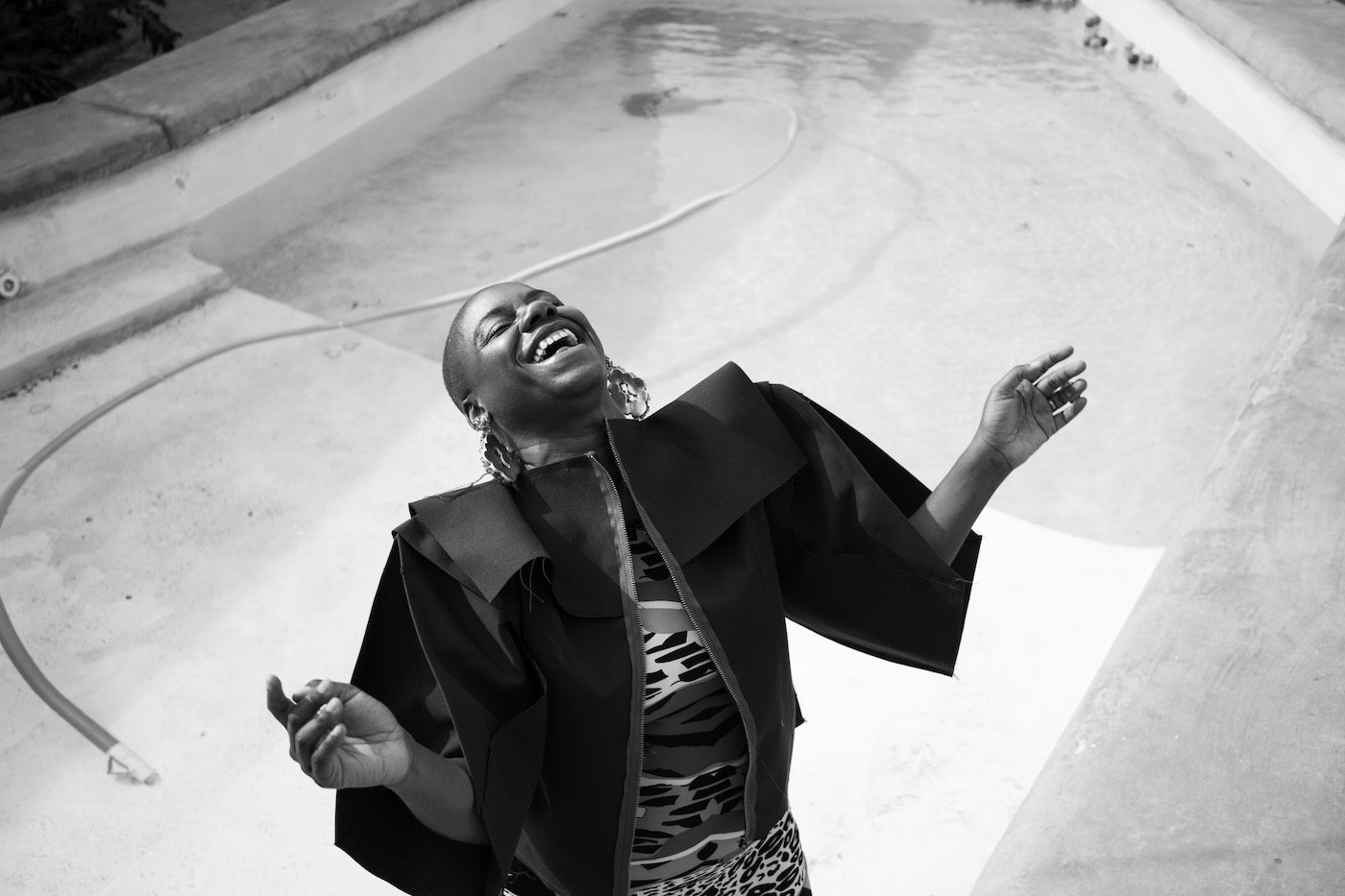 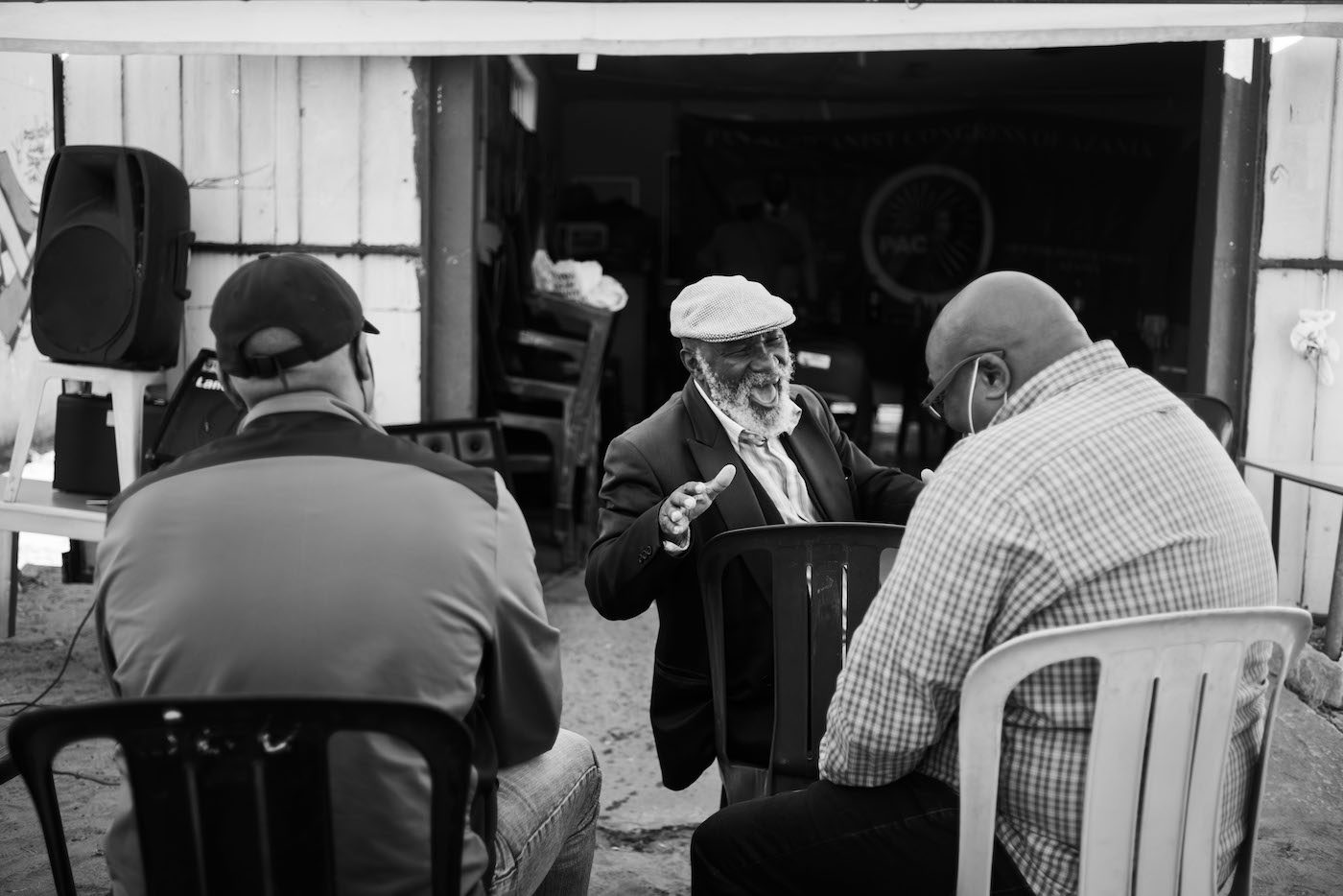 Andymkosi, Between Sisters, 2021. 25 OCTOBER 2019 : A day before the Johannesburg Pride, Le Grande hosted a Festish Ball with various categories for the queer community to parttake in at the Tennis Club. Courtesy of the artist.
7/12
7/12 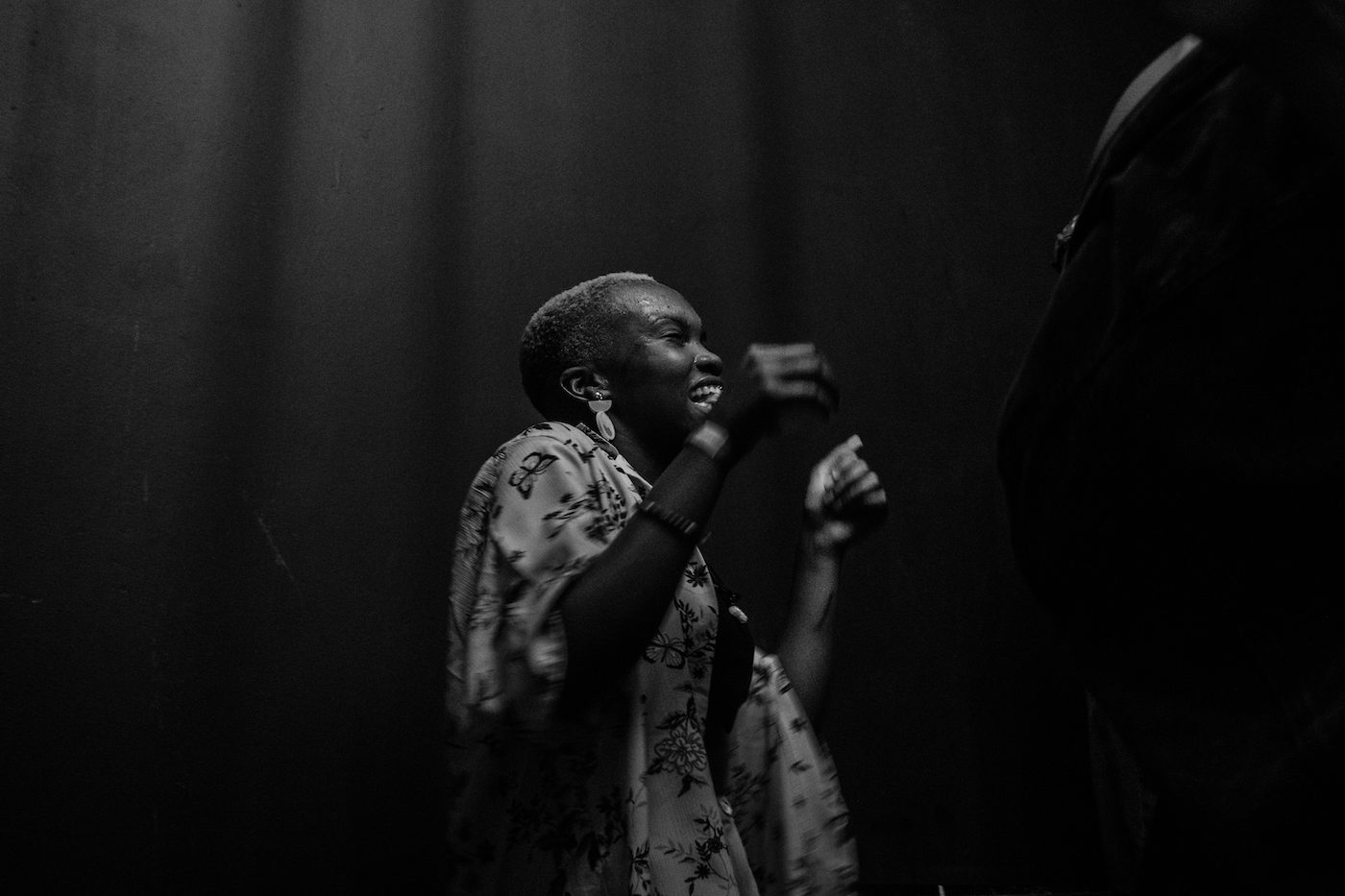 30 November 2019 : KOP hosts their last event for 2019 at the Third Placein Newtown. The night had two stages, live graffiti art, games and heavy entertainment. Courtesy of the artist.
8/12
8/12 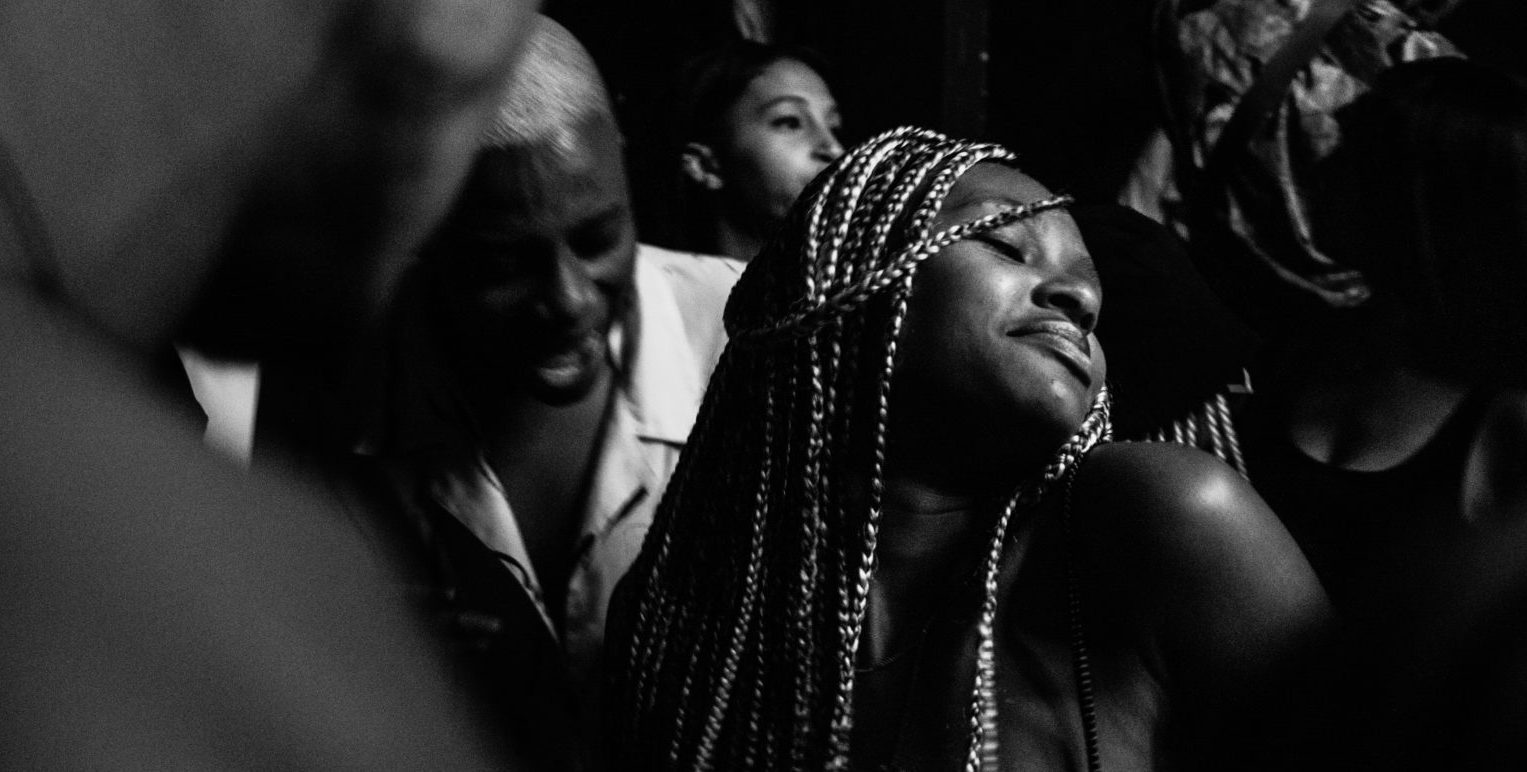 ANDYMKOSI, Even in Darkness, Makes a Space for Light

The South African photographer presents us with an alternative and joyful portrait of Black experiences on the continent.

South African photographer and rapper ANDYMKOSI helps us see modern South Africa with a more broadly encompassing gaze. Born in Cape Town, she grew up between the townships Langa and Gugulethu, where she started to discover her interest in writing, rap, and other forms of artistic expression. Photography came a little later, when she applied to study film at the Cape Town Peninsula University of Technology but was instead accepted to take the photography course. Ever since, ANDYMKOSI’s work has been faithful to a vision that includes the misrepresented and expands the idea of what “African photography” is.

Andymkosi, Between Sisters, 2021. 25 OCTOBER 2019 : A day before the Johannesburg Pride, Le Grande hosted a Festish Ball with various categories for the queer community to parttake in at the Tennis Club. Courtesy of the artist.

She began photographing professionally in the mid-2010s. In those years South Africa had just been through Thabo Mbeki’s presidency, and a lot was happening. People remember that time and the few years preceding it as the time of the AIDS scourge, when the country was pitched into the center of the most outlandish stories of STIs, violence, and rape. That period in which South Africa was evolving its identity as a new democracy was significant for ANDYMKOSI in her examination of the power of stories in forging a national image.

Some of her recent photographs – Between Sisters (2021), Mesuli and Ocean (2021), Jackie Queens (2021), PAC House in Langa (2021), and Kids Swimming at N2 Gateway (2021) – share in an imagery of joy. Joy is something not sufficiently seen in photographic representations of African people. We tend to be depicted as stern, serious, suffering, struggling, or sad – sometimes all of those things. There seldom seems space for the other dimensions of our humanity. In photojournalism and cultural activism, the Black face and body often symbolize struggle and respond, with varying degrees of somberness, to colonialism and exploitation.

Those images may bear truths, of course. But the continuous publishing of them suggests that they are the only story there is. ANDYMKOSI shows that an African context is much more than a repository of wounds and that the continent is no mere catalogue of struggle. In committing to an aesthetic of joy, her photographs do not varnish reality – they enlarge it. “I want to show my family in the fullness of their beauty,” she says, “and celebrate the strength of character of my people.” Although different in aesthetic and focus from the resonant portrayals of South African photographers like Ernest Cole and Jo Ractliffe, whose works document people and landscape in the context of society’s brutality and callousness, ANDYMKOSI’s work does not run counter to theirs but complements it. Her photography bears a different, but just as necessary, kind of witness.

“The world, with all its wars, is not yet hell,” American cleric Thomas Merton wrote. “And history, however terrible, has another and a deeper meaning.” I find Merton’s sentiment illuminating because it acknowledges the presence of the terrible as well as the possibility of finding a deeper meaning in it. In There’s Beauty in Mourning (2019), a photograph made in Kensington, Johannesburg, ANDYMKOSI embodies this way of thinking. A woman looks out through a window with a parted curtain. The light is a muted tint of brown and her face is in shadow. There’s a peace and patience to the shot best described with two words: sublime, beautiful. Even looking at pain and grief, ANDYMKOSI remains alert to what is irreducible, what is beautiful. Pain is not glossed over, nor is grief. They are made to find a place beside beauty.

For a series of photographs titled MIDGROOVE, ANDYMKOSI goes to parties in Johannesburg to find, as she says, “those instances when things happen.” In Party Goers in Newtown (2019), a woman with her boyfriend’s arm around her shoulder looks at the camera with a cool, near sassiness, like she’s saying, yeah, look at me, I’m fine. In the background, dancers with their arms in the air lend a texture and a productive tension to the photo. Both groups assert themselves but in opposite ways: the woman is fully conscious of being photographed and draws the viewer into this consciousness, while the dancers let all self-consciousness fall away.

In Lovers Corner at Groove (2019), from that same series, a group of young people in hip party clothes sit in pairs, each with their partner or romantic interest. They are relaxed and happy, caught up in each other. In Party Goers at a Club in Johannesburg (2019), two figures with their backs to the camera fill the foreground. Behind them a woman with large earrings laughs. She seems to be dancing. On the right a woman with cropped hair and large hoop earrings watches her. At the edge of the frame is a hand, raised also as if in dance. These are certainly instances in which things are happening. People have really eased into the comfort of dance and laughter.

ANDYMKOSI travels around the townships – Langa, Gugulethu, Soweto, Khayelitsha – making photographs that, as she said in a 2018 interview for Behind the Walls, “document things swept under the carpet.” In her photographs, there is scarcely any sentimentality. But even her photographs of landscapes and neighborhoods, such as those in Scapes and Spaces, are full of intimacy and care.

Andymkosi, N2 Gateway at Night, 2019. Courtesy of the artist.

In N2 Gateway at Night (2019), part of a series titled Langa, My Love, a lone tree stands outside a doorway, yellow light pouring around it. Its trunk is half light, half dark. There seem to be two lights – a smaller one (the moon) in the distance, and a greater one (the source invisible) closer to the house, to the tree. There is a passageway, and the light falls in perfect geometric patterns on the floor and against the walls. The lights temper the darkness, the darkness tempers the lights; none quite edges out the other. And again: the care in the photo, as in several of her photos – each one a document of carefully calibrated gestures.