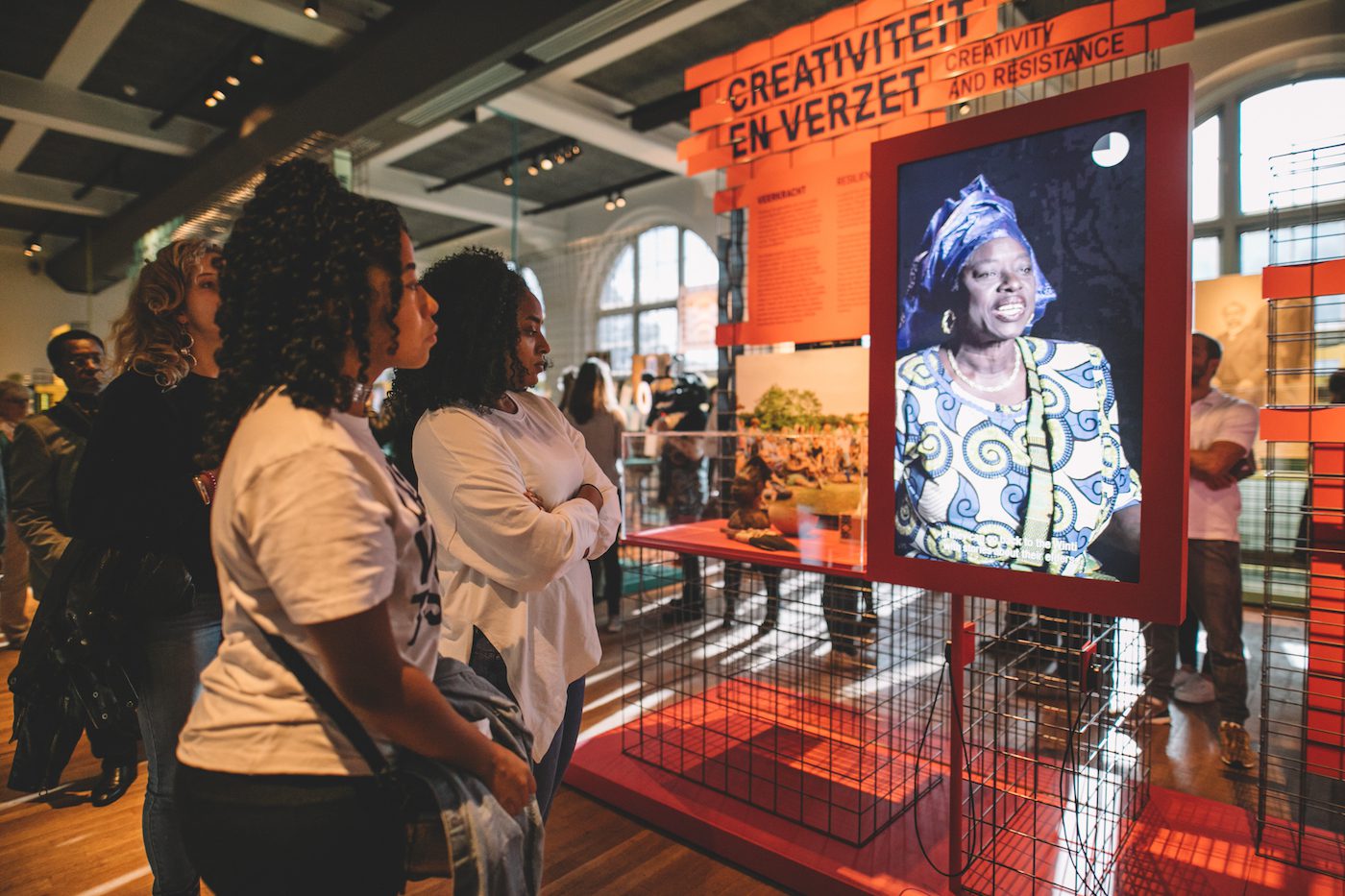 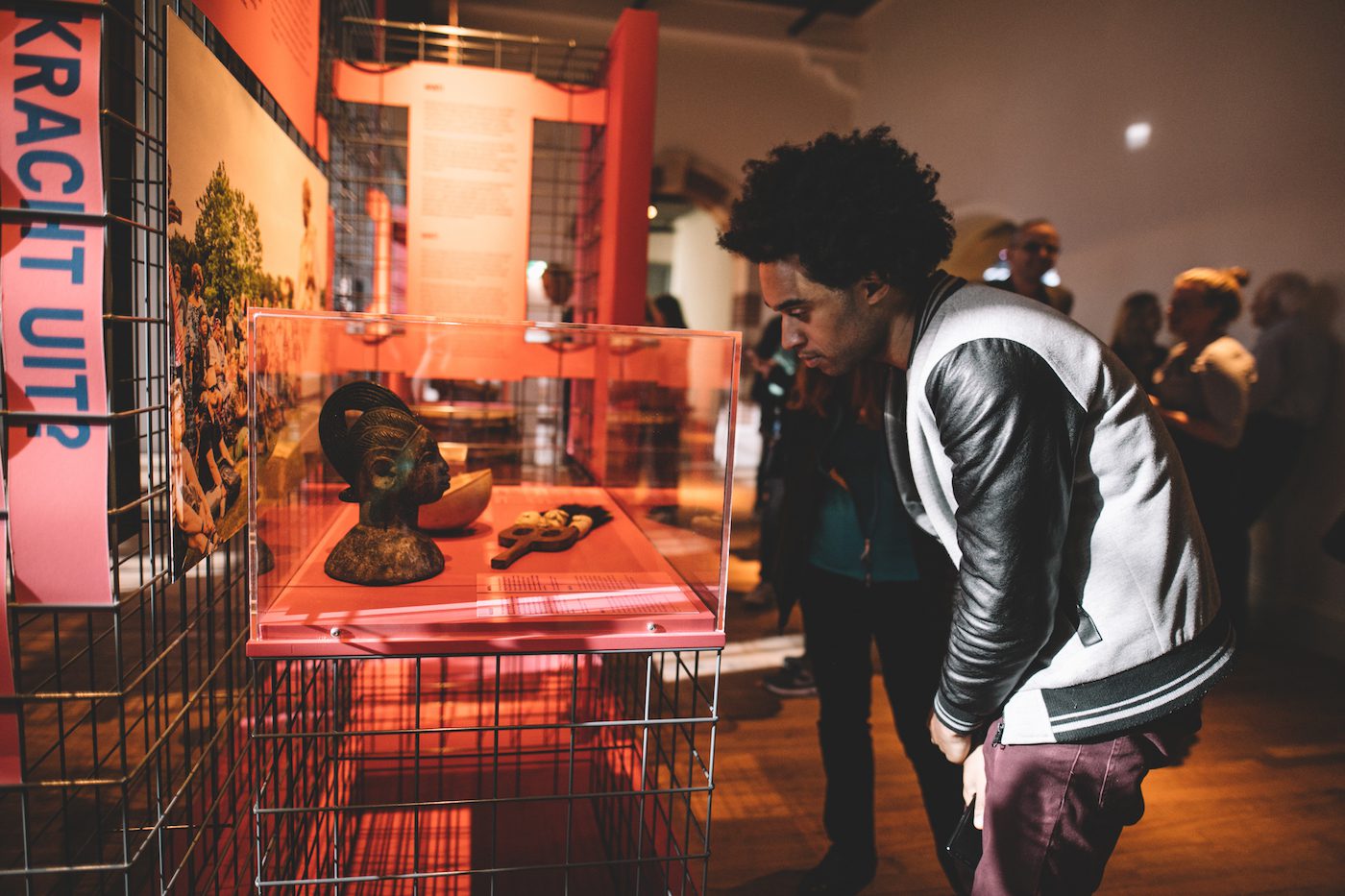 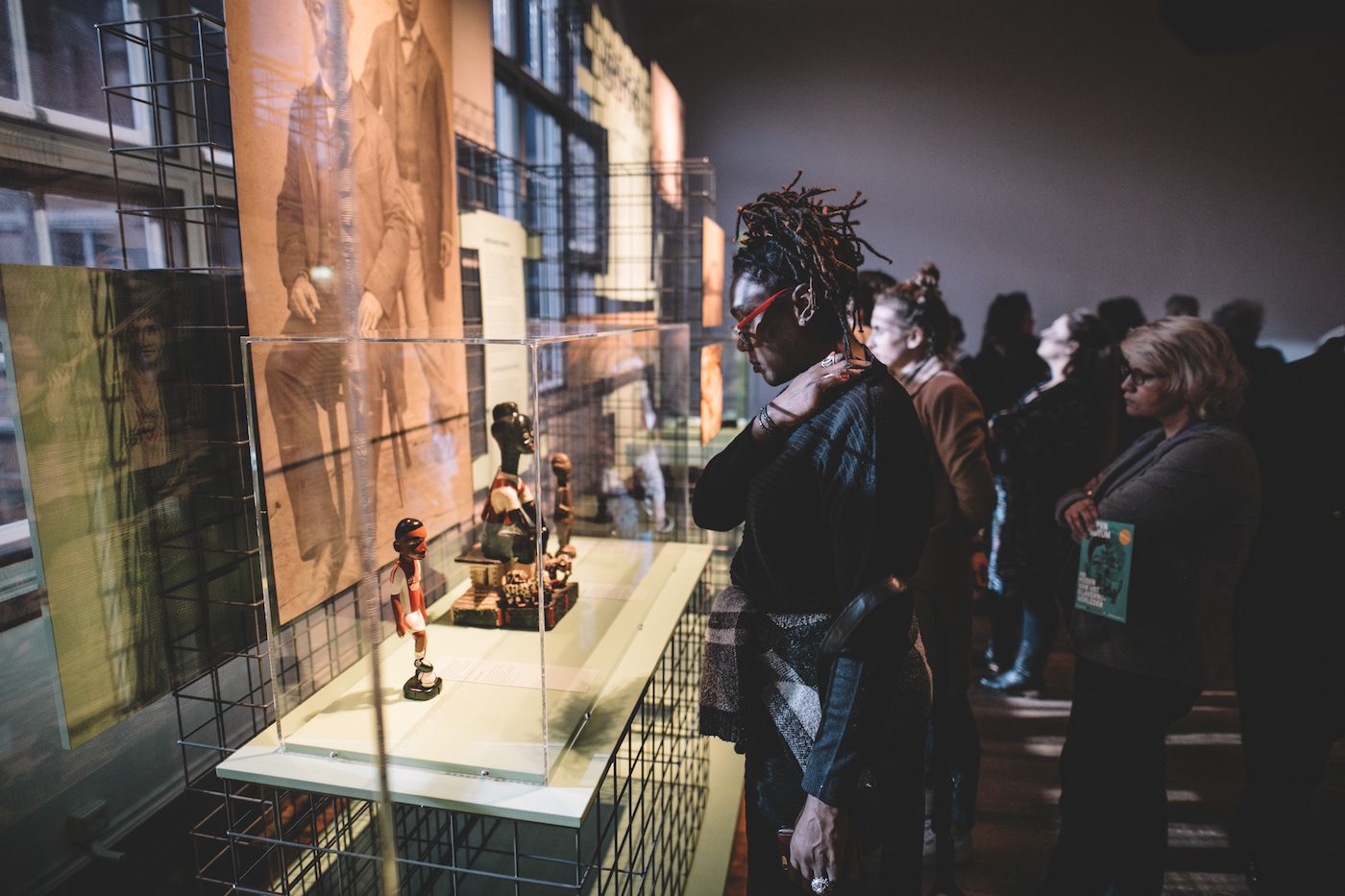 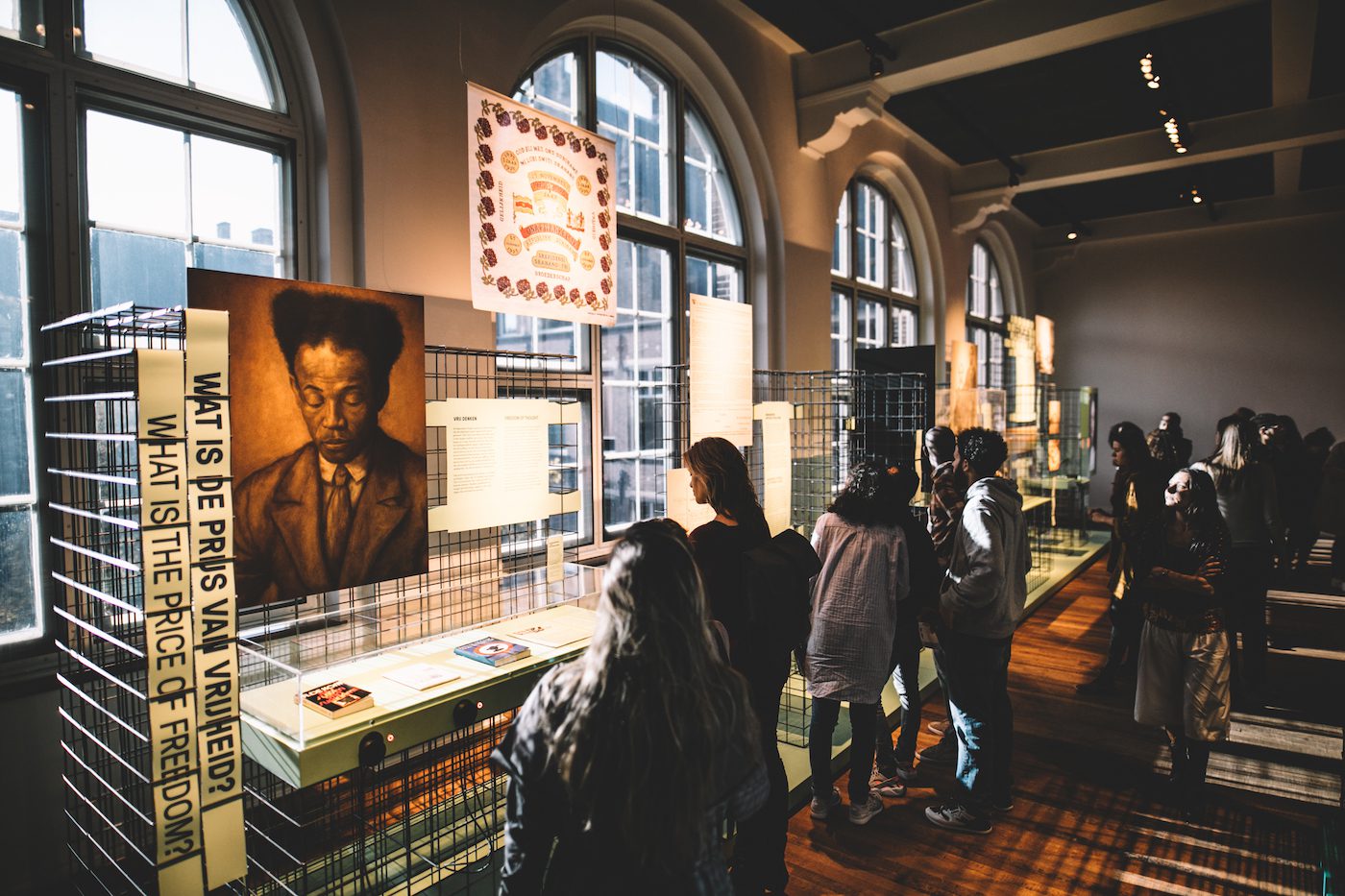 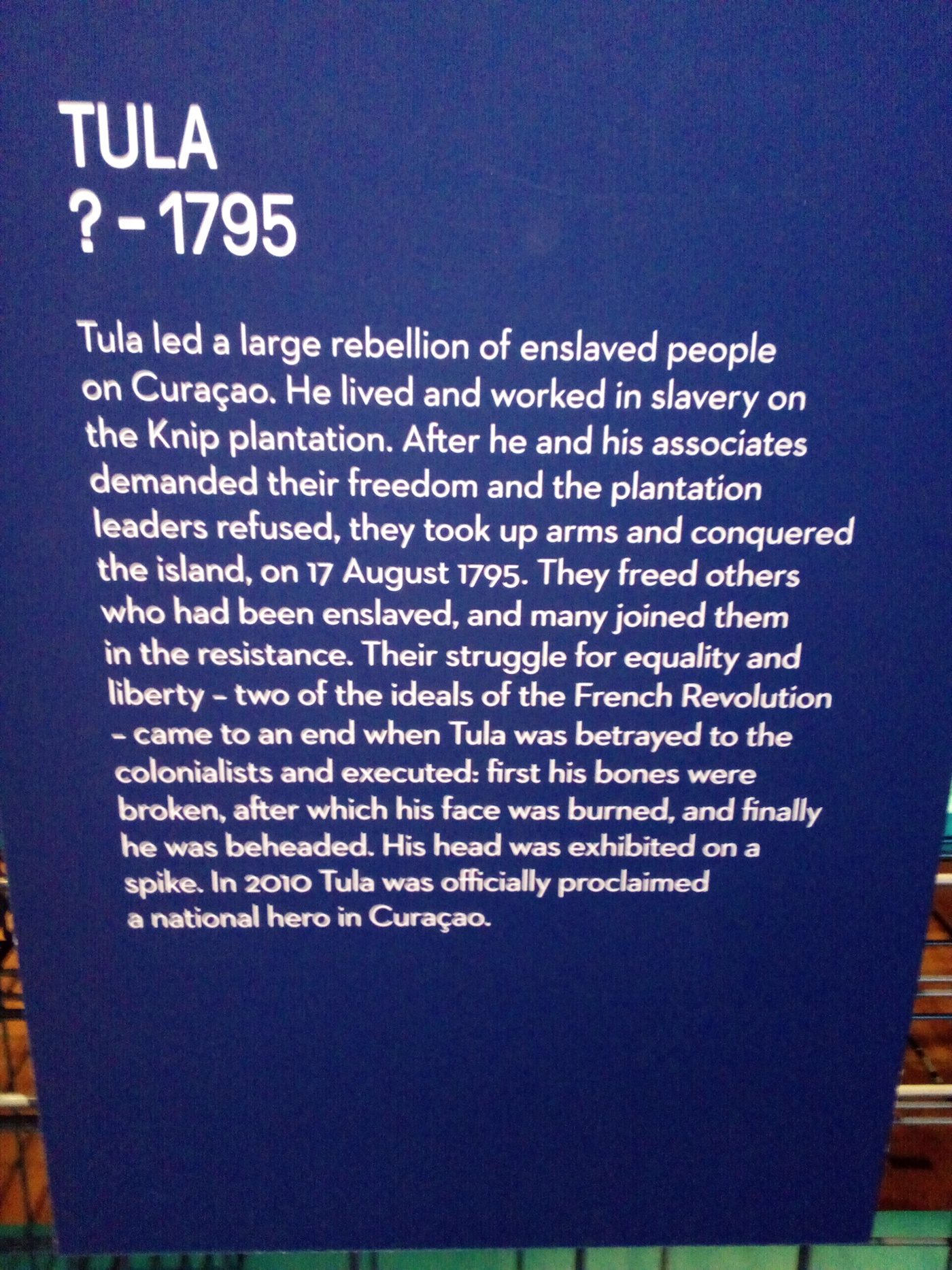 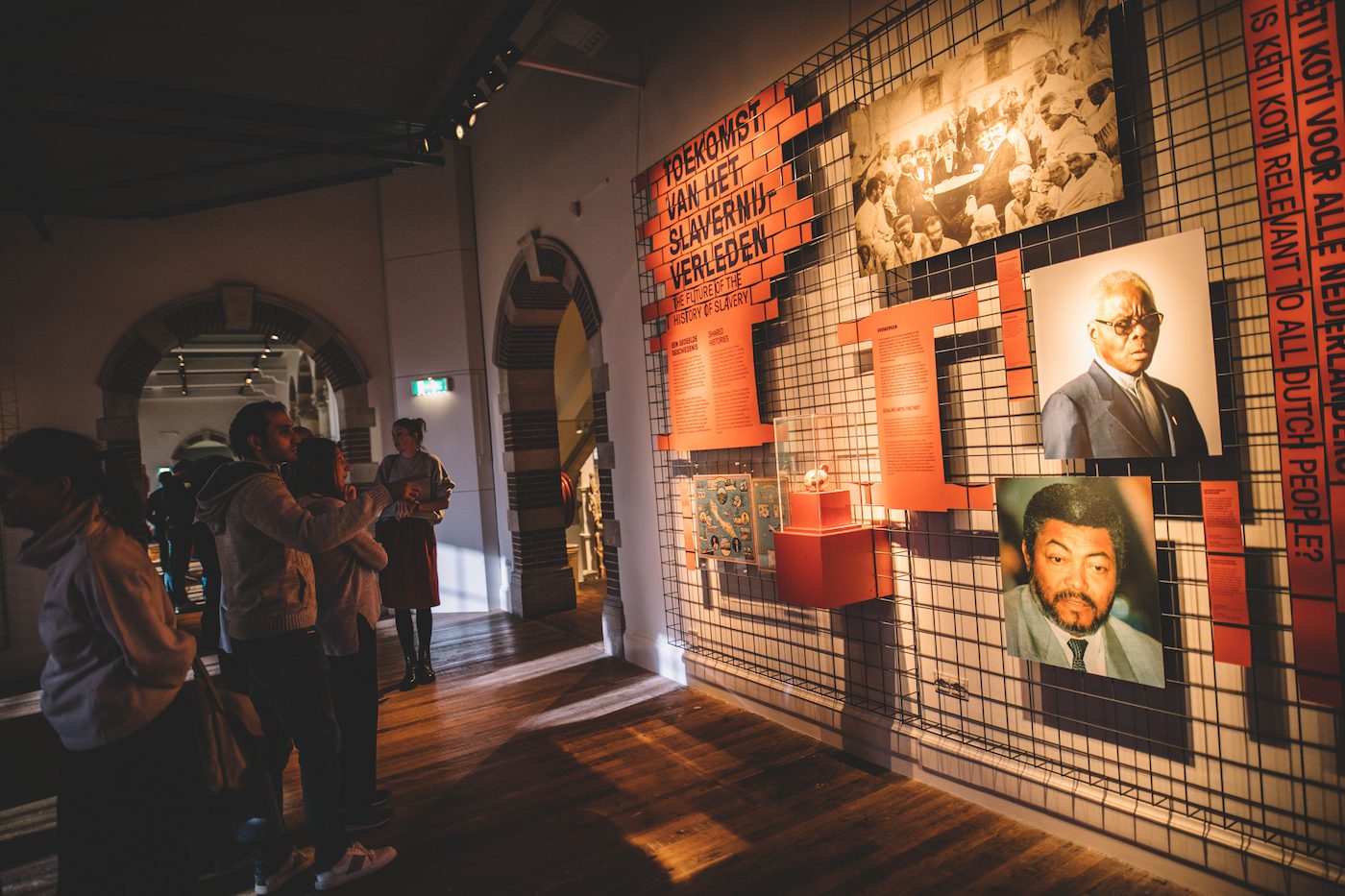 Analyzing the Past and Decolonizing the Future

The Netherlands was one of the most belligerent European colonial empires. Driven by commerce and spread over four continents, their imperial ambitions changed the lives and cultures of millions of people from Indonesia to the Caribbean. In this series artists and arts practitioners share their thoughts on how to deal with the legacies of that empire, in the Netherlands and beyond. Here our author Heitor Augusto takes a closer look at the exhibtion Afterlives of Slavery at the Tropenmuseum Amsterdam.

The exhibition Afterlives of Slavery addresses the Netherland’s colonial past and how it lingers in the present. But does such an effort represent a solid process of decolonizing a museum?

Afterlives of Slavery, a semi-permanent exhibition at the Tropenmuseum in Amsterdam can be inserted into a current chronology of attempted critical takes on colonization and on the colonial gaze. Similar attempts were made with exhibits at the base of the monument “Padrão dos Descobrimentos” (lit. Monument of the Discoveries) in Lisbon or in the six-month exhibition Afro-Atlantic Histories that took place at MASP and Instituto Tomie Ohtake in São Paulo.

Afterlives of Slavery addresses the Netherlands’ colonial past and its lingering presence, taking the local audience as a focal point. A major aspiration of the exposition is to call immediate attention to the country’s colonial violence and its role in the transatlantic slave trade. However, the conditions of production, the grid format, the limited scope of the material selected, the choice of a video that promises non-threatening education, and the almost complete absence of works by artists of color born in the Netherlands or in the former colonies suggest that certain things still need to be discussed. It indicates that a serious conversation around race, racism, colonialism, and colonial fetishism in the arts is yet to be meaningfully done in the Dutch context.

The exhibition at the Tropenmuseum can be accessed from three different points, which represents more than a mere architectural feature. It directly impacts the public’s experience and ultimately makes us question how feasible the exhibit’s goals are.

Those climbing the main stairs to the first floor of the monumental palace are welcomed by an invitation to celebrate a commemoration of Keti Kote, which means “broken chains” and represents the official abolition of slavery in Suriname and the Dutch Antilles. Textiles portraying the celebration or other relevant episodes in the country’s history hang from the ceiling. On the walls, information panels explain the Dutch role in the slave trade. The room’s main feature is Dorothy Blokland’s Keti Koti – Gebroken Ketenen, a video that brings the conversation to the present and exposes the everlasting presence of colonialism through the surnames of millions of Black individuals.

Coming from Brazil, it is natural for me to accentuate specific links between this room and the São Paulo exhibition Afro-Atlantic Histories, as both highlight the role fabrics and quilts have played as a medium for artistic expression as well as storytelling for Black people. Suriname’s textile representation of the Keti Koti resonates with Brazilians from Salvador through Jota Cunha’s Organizações de resistência negra – Ilê Aiyê (1995); with Beninese through Emblemes des rois Danxome Abomey (undated); and with US Americans through Faith Ringgold’s Who’s Afraid of Aunt Jemima? (1983) or Subway Graffitti n. 2 (1987) – all of which were shown in Brazil.

The second point of entry leads the visitor straight to the heart of an exhibit, which concentrates a great deal of content in a small area. The topics some of the mini-exhibition rooms are addressing include: the creation of race and the beginnings of scientific racism; racial stereotypes and the fascination for the Black entertainer; or cultural/musical/political manifestations such as the Tambú. There are interviews with scholars, a “talk to us” section, title cards with information about key historic figures, colonial maps, and pictures documenting the “human zoos”. The obvious efforts to cover a wide variety of topics might indicate how much these stories have been erased from the Dutch collective imaginary.

Afterlives of slavery is described as a “prelude to the exhibition about the Netherlands’ colonial history that is to open at the Tropenmuseum in a few years’ time”. As such, the potential hidden in some of the content should not be overlooked. The section addressing the calls by activists to “create more space for non-Eurocentric perspectives and ideas”, as well as a segment highlighting the damaging tradition of the Zwarte Piet (“Black Pete”), could represent a powerful decolonial turn.

At the third point of entry, the building’s architecture induces the visitor to walk through three other current exhibitions that explore Southeast Asia, Indonesia, and Papua New Guinea, which represent a high contrast to the curatorial approaches of Afterlives of Slavery. Coming to the exhibition from this direction leaves you with a sense of disappointment because the colonial gaze seems to remain untouched.

There is a dilemma that lies at the core of both Afterlives of Slavery and the subsequent larger exhibition. The question is: how can a museum raise awareness and acknowledge the colonial enterprise as an act of violence that calls for reparation but at the same time avoid denying meaningful agency to the subaltern bodies whose artistic production deals with the pain while simultaneously forging futures? Through such reflection a real possibility might arise for envisaging the lives of our racialized bodies after that “peculiar institution” called slavery. Otherwise, a title such as Afterlives of Slavery will not represent anything but a simulacrum. Meanwhile, this exhibition seems to imply that a post-colonial world is built by the mere acknowledgement of the colonial past, which raises the question as to whether the conversation on race in the Netherlands is in such an embryonic stage that this may be seen as an important achievement.

This discussion goes beyond one single exhibition. It reaches down to the Tropenmuseum’s very roots. An ethnographic museum, it shares a history with many art institutions throughout Europe. Its collection is associated with the colonial enterprise and how art and objects representing cultures were part of a larger project of “discovering,” classifying, hierarchizing, and subjugating. From a curating standpoint, it’s fascinating to think how, in today’s world, a collection built through violence can be mobilized for the implosion of the colonial gaze. What possibilities reside in the Tropenmuseum’s archives? What efforts does the museum undertake to review its past exhibitions from a critical standpoint?

Any meaningful attempt at decolonization must place contributions by curators of color in the Netherlands and abroad with their museal experiences and creative inputs at the center. For an institution that indicates an interest in the afterlives of slavery, these processes cannot be avoided.

Heitor Augusto works as an independent curator, film critic, and lecturer in São Paulo, Brazil. Curator of the retrospective Black Brazilian Cinema: Episodes of a Fragmented History (1973-2017), he also served as one of the curators for Festival de Brasília. Following an urge to go beyond the film festival structure, he has also programmed for Instituto Tomie Ohtake and is in the early stages of a program for the National Gallery of Jamaica. He is currently researching for a program on radical and experimental filmmaking by PoC around the globe. Through his work he hopes to uncover systemic invisibilization perpetuated by traditional approaches of film history and art. Urso de Lata (www.ursodelata.com) is his personal website, where his writing inhabits the intersections between aesthetics, politics, and race.