The Exit Tour at the Off of the Dak'art Biennale. Courtesy of the Exit Tour members.
1/8
1/8 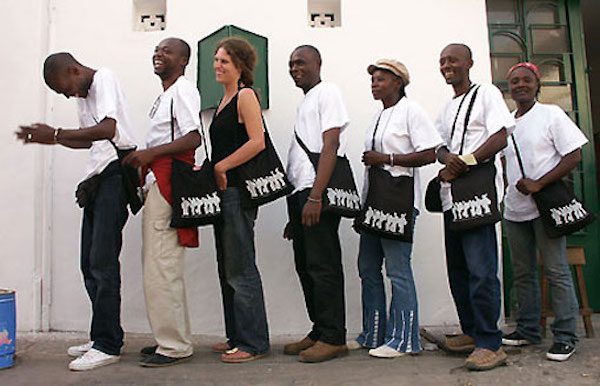 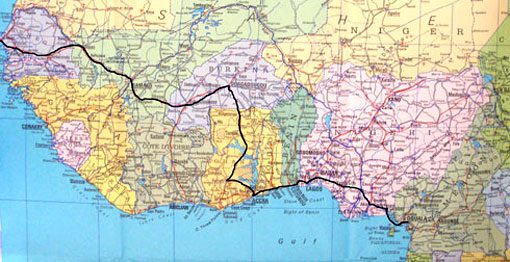 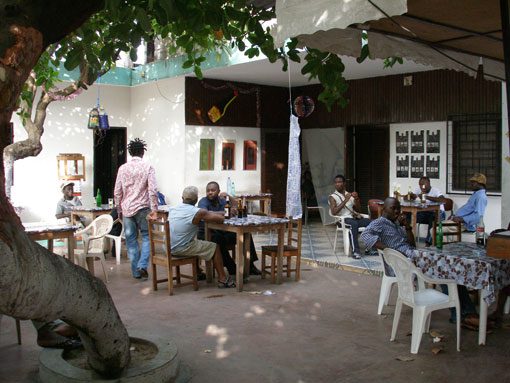 Encounter with the local art scene at Queen Arlette. Photo the artists.
5/8
5/8

Hinking to accomodation in Ouagadougu. Photo the artist.
7/8
7/8

Looking back on the Exit Tour 2006

Led by Goddy Leye, in 2006 seven artists went on a journey from Douala, through West Africa, aiming for Dak’art. In the process they developed the ideas that went on to redevelop art education in Cameroon. To mark the 10th anniversary of their feat they look back at the defining moments of their art tour.

From March to May 2006, a group of Cameroonian artists (and one from Switzerland) set off on a unique artistic adventure. Equipped solely with backpacks, they left Douala, Cameroon’s economic capital, aiming to reach Dak’art, the biennale of contemporary African art in Senegal. Their only purpose was to discover Africa and enrich their understanding of art through exchanges along the way. The project’s initiator was Goddy Leye, a contemporary artist from Cameroon and the founder of the first space for artistic experimentation in the country, ArtBakery. The seven adventurers – Ginette Daleu, Justine Gaga, Dunja Herzog, Lucfosther Diop, Achilleka, Alioum Moussa, and Goddy Leye (†2011)  – crossed nine borders and visited some of the largest cities in West Africa. Ten years later, Justine Gaga and Alioum Moussa recount their experiences for us and what they have held onto from this highly risky exploit.

Exit: Leaving as the starting point of the adventure…

Alioum Moussa: Goddy Leye wanted his ArtBakery space to be an oasis of artmaking that would give artists autonomy. When everyone finished their residencies, they had to present the results of their work at the DOUAL’ART triennial. We had entered the residency, we had all kind of new questions, and now we had to leave it. That’s where the title EXIT came from: to exit like a child being born. That group exhibition gave us good visibility. All the works were well-received, and the concept was beautiful!

Justine Gaga: I was an adventurer. I was leaving a voyage that went wrong. I’d spent three adventurous weeks in a wooden boat, all the way to Francfort [Cameroon]. January 2005 was when I started working with Goddy Leye. It was really a school. When he walked into the room, everyone clapped, everyone wanted to hear him. I told him, “Goddy, you know there’s something I’m tempted to do…”  I just had to go on another adventure. I wanted so badly to have done things, to have a CV. I had a document about the route from here to Douala and all the way up to Morocco and Spain. I asked him if we couldn’t take a trip following the path of the underground railroad. That’s how he came up with the idea of doing a project called Exit Tour, which would allow people who had done a residency to go elsewhere and see what was happening on the continent.

Hinking to accomodation in Ouagadougu. Photo the artist.

From Doual’Art to Dak’Art: Weaving Together Artistic Experiences in West Africa

JG: Why don’t Africans start off by seeing Africa, understanding Africa? For us, understanding Africa economically means West Africa. Because the Dak’Art fair was linked to almost the whole region of West Africa. Most of us had never been there even though the connections were easy with the national highways. So we went off to go along this belt from major city to major city: Doula to Calabar to Lagos to Cotonou to Lome to Accra to Ouagadougou to Bamako and finally Dakar.

Exchanges and Encounters to Make Work

JG: When we got to Cotonou, everything changed – because we realized we didn’t want to go there to paint.

AM: Getting to know Africa didn’t mean showing off what we were doing. It meant getting to know local artists, curators, art centers. Asking ourselves if they shared the same reality as us.

JG: …sharing experiences. That helped us understand that we weren’t the only people to have the problems we had.  The interesting side of the journey was always the difficulties, the realities we could touch with our fingertips.

Encounter with the local art scene at Queen Arlette in Cotonou. Photo the artists.

From One Border to the Next to Question Art

AM: At each of our destinations, we asked questions out loud: What is the status of artists? How do institutions take responsibility for them? Is the state concerned with artists? And everyone expressed their feelings about that.

JG: Exit Tour raised a bunch of questions about the Dak’art biennale. Exit Tour tried to answer the question of what an artwork is. Can’t the artist become the artwork? That’s how it was for us; we no longer felt the need to create work on the road. All the things we were doing, our exchanges and ongoing performance, that was an artwork!  It took shape slowly but surely as we progressed.

From Exit Tour to ArtBakery: Creating a Platform for Alternative Artistic Education in Cameroon

AM: The artists in the ArtBakery’s orbit were always artists whose minds Goddy Leye had shaped, as artists and as people.

JG: Goddy Leye used to say that the choice that brought him back to Cameroon was the realization that the Cameroonian scene didn’t have any educational opportunities. That’s what motivated him to establish the ArtBakery project. It was a space of reflection where people had to contemplate and see how they would construct their work. It was alternative education. At the time, there wasn’t a single art school there. There weren’t any landmarks, nothing for artists like us. The project that really changed people’s views was Exit Tour. That’s why ArtBakery blew up.

JG: For us, Exit Tour was a kind of school because what we experienced on the road was honestly so huge it’s beyond estimation. We inherited almost everything from Goddy. That desire to make things happen, to make initiatives, not just to benefit ourselves, but to nourish others. There’s a kind of magic that attracts us. It’s also the fruit of all that time we spent on the road, getting closer, getting to know each other better, growing up together. It makes us proud to be able to talk about that project.

AMET is a sound artist from Cameroon who was partly raised in Germany. She works with time based media, mostly in the form of sound performance and experimental podcast. Her work uses words and sounds in the form of transcoding, code switching and algorithms. Her current work process has been taking place mostly in African and diasporic communities, building a fine print of electronic griotage reaching from the past into the future. As the philosopher Mudimbe said, “Africa is an invention, for that matter Africans have to (re-)invent themselves.”