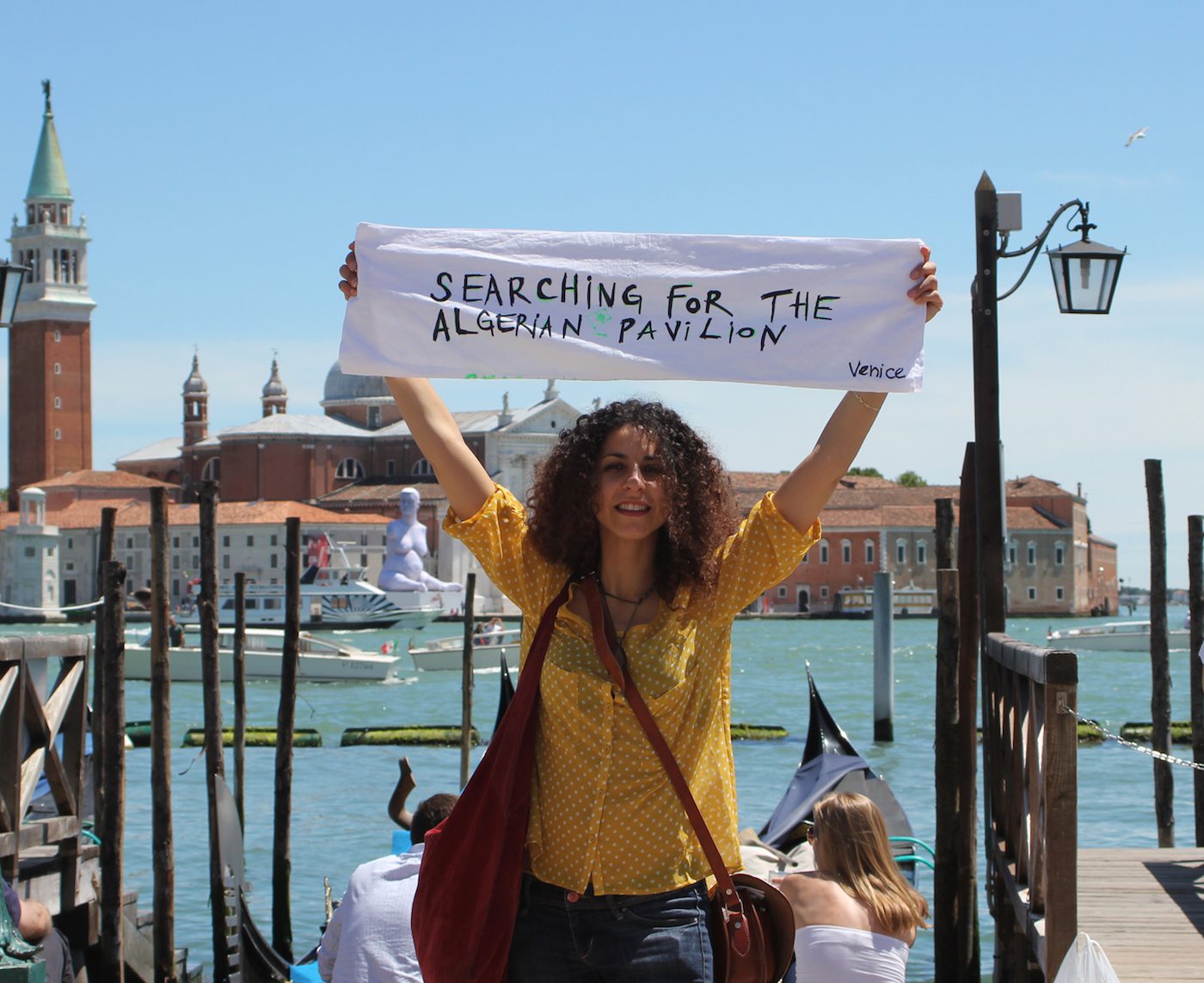 Amina Zoubir, Searching for the Algerian Pavilion, photograph of the performance made in June 3rd 2013 during The Venice Biennale, behind sculpture of Marc Quinn on the island San Giorgio Maggiore, 120x80 cm, 2013. © Amina ZOUBIR ADAGP Paris
1/1
1/1

Amina Zoubir on the Tribulations of the Algerian Pavilion

Several weeks ago Algeria was officially announced as a participant country at the 2019 Venice Biennale. Then it was suddenly dropped from the official list and now it’s set to open tomorrow on 9 May. C& spoke to Amina Zoubir, one of the project’s participants, about the incident and her personal views on the importance of the pavilion in relation to the current turning point in Algerian politics.

Amina Zoubir, Searching for the Algerian Pavilion, photograph of the performance made in June 3rd 2013 during The Venice Biennale, behind sculpture of Marc Quinn on the island San Giorgio Maggiore, 120x80 cm, 2013. © Amina ZOUBIR ADAGP Paris

Contemporary And: What does Algeria’s participation in the Venice Biennale represent for you?

Amina Zoubir: Algeria has been absent from major international cultural events since its independence in 1962. As major African country, like Ghana or Madagascar, Algeria deserves to have its first pavilion at the Venice Biennale. It’s a responsibility and a civic duty to honor the country and its flag at the most important biennales. The Venice Biennale is an international intellectual competition of contemporary artists for the Golden Lion. The aesthetic, social, and political stakes are borne by artworks critically and arduously, with the aim of accounting for a temporality of contemporaneity.

We, Algerian artists chosen to represent the Algerian pavilion, are also part of the new Hirak [movement] generation and the people who demonstrated in the streets of the cities of Algeria, demanding political and democratic change. This is the time and territory that I have lived and experienced through my work as a visual artist. The positive consequence of the Hirak is that the president resigned on 2 April, but then the new Minister of Culture in charge of the transition withdrew financial support and, on 4 April, decided to defer Algeria’s official participation at the biennale, with no regard for all the work we had done to organize it.

C&: How did you feel when you heard of the “deferment”? And are you planning to put on the exhibition in an alternative space?

AZ: I felt as if we no longer exist, as if no work had been done to get the Algerian pavilion officially registered. We see the decision as disregarding all the work we made to organize the Algerian pavilion, since the artworks were produced, the exhibition catalogue was printed, the invitations were sent out.

Meanwhile the will of the Algerian artists is to have our pavilion from 11 May until 24 November 2019 with the support of private sponsors. We will therefore show the exhibition in the same location, as well as the artistic project titled Time to Shine Bright. The new Minister of Culture cancelled the pavilion for organizational reasons that they could not follow due to the political instability, which forces us to find private funds.

C&: Could you tell us more about the exhibition and the work you produced for it?

AZ: The curatorial statement of the Algerian pavilion supported by Hellal Mahmoud Zoubir is to resist and show our positions through our perceptions of what art is for us, and to lend an impetus so sorely missed over these last years, showing an avant-garde and acting with its genius process of resilience, as beings who bring the glow to make us shine again in the darkness of the existential emptiness. It is high time for us to sparkle with our light.

It insists on the choice of the curator, Hellal Mahmoud Zoubir, to focus on young but experienced contemporary artists, all born in Algeria and all trained at the School of Fine Arts in Algiers, whose director Ahmed Asselah and his son were murdered on 5 March 1994 during the civil war.

I had always questioned the eyes of others through my works relating body experiences in predetermined spaces, according to socio-cultural, ethno-psychic, and political contexts. My works examine social and historical thoughts from poetics and myths formulated in the Maghreb in North Africa. It is crucial to know where you are talking from to imagine where you want to go and give yourself the means to exist. My project is not a material work; my project is to support critical thought about what we are for and how we face the world. How an artist from Africa can exist in the field of contemporary art.

I’d also like to address the critical thoughts of my mentors Okwui Enwezor and Olabisi Silva, peace to their souls. They left us too early, and I want to honor and continue their fight to deconstruct the Western gaze in its own field and to challenge preconceived discourses on art, not only in Africa, but at the international level.

C&: How did you express your disappointment as curators and artists regarding the “deferment”?

AZ: We stand in solidarity with our Algerian people and support all their legitimate demands, we wish our country a democratic change, we are not part of any old or new regime or political system, we are only artists. The project of the Algerian pavilion is an autonomous citizen action that has had the support of the Ministry of Culture to exist at the Venice Biennale. We Algerian artists support all projects that honor Algeria, and we always do it with our works, the ones we produce with our own means. We have devoted our time and resources, including financial resources, to finally allow the Algerian Pavilion, beyond our own personalities, to be presented at one of the most important international contemporary art events in the world.

Amina Zoubir lives and works between Paris (France) and Algiers (Algeria). She is an artist, filmmaker and video art curator. She is graduated a Master in Theory and practice of contemporary art and new media from the University Paris 8 and a DESA in graphic design obtained in 2006 at the School of Fine Arts of Algiers.