At the 56th Biennale in Venice, Sean O’Toole muses about changing canons, socialist art and the relative lack of artists from the African continent being present at “All the World’s Futures”.

Sometime late in 1995, 32-year-old Okwui Enwezor, a political science graduate of New Jersey City University who had recently redirected his early aspirations as a poet into art criticism, authored what now reads like a career manifesto. Published in the January-February 1996 edition of frieze magazine, ‘Occupied Territories’ was nominally a review of africa95, a season of UK-based events that celebrated African creativity in various disciplines and was directed by Clémentine Deliss, currently director of the Weltkulturen Museum in Frankfurt. But his piece was far more than simply a review. In many ways, Enwezor laid out the intellectual basis of his position as critic and publisher of NKA, the “journal” (not magazine, which it resembled at first) of “contemporary African art” that he cofounded in 1994.

That position is currently the subject of intense scrutiny as Enwezor’s exhibition ‘All the World’s Futures’ runs as the anchor show at this year’s Venice Biennale, of which he is also the artistic director. Whatever one thinks of his sprawling, elegiac and ideas-rich exhibition in Venice, it is a milestone. Less so for Africa, I would argue, that freighted and pliable noun whose moment is perpetually being authored and announced elsewhere, but definitely for postcolonial thought. Enwezor is first and foremost an intellectual. The tightrope walk that his 1996 article engages in, between poetic expressionism prompted by an encounter with creativity and the celebration of post-western theory (he for instance appreciatively quotes Foucauldian scholar and philosopher V.Y. Mudimbe), is also a key feature of ‘All the World’s Futures’. 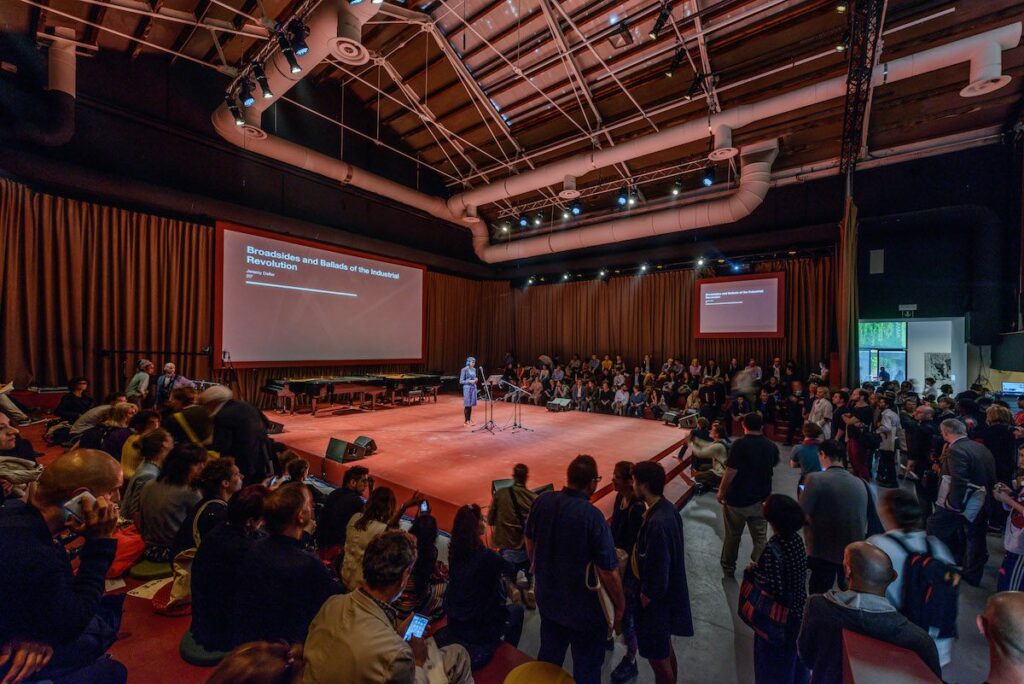 Indeed, my overriding experience of Venice this year was of climbing through a black square – personally I prefer Ad Reinhardt to Kazimir Malevich – and stumbling upon a class reunion for retired professors of Marxist theory. As you read this, Karl Marx’s three-part volume Das Kapital (Capital, 1887) is being read out loud as a dramatic text in the ARENA, a David Adjaye-designed auditorium inside the Central Pavilion of the Giardini. Text and a materialist reading of the world are key biases of Enwezor’s overall project as a thinker; it also explains the occasional lapses into aridity and a winter of words that marks ‘All the World’s Futures’.

Still, it is hard not to be persuaded by Enwezor’s persistent focus, which takes the stuff of news and reframes the artist as a kind of meta-journalist. ‘All the World’s Futures’ opened two weeks after 700 people, mostly migrants from North Africa, drowned when the fishing boat they were squeezed onto capsized off the Libyan coast. “As the nightly news has consistently informed us, nothing makes for a better story than a prostrate and defenceless African, fixed in that interminable dilemma called death, waiting for a tale that seems forever buried beneath the charm of good intentions,” wrote Enwezor in his 1996 review. Nearly two decades after he authored his blistering attack on “the west’s usual reluctance to address issues of representation that do not place the west on top,” here we are, stuck in much the same place. 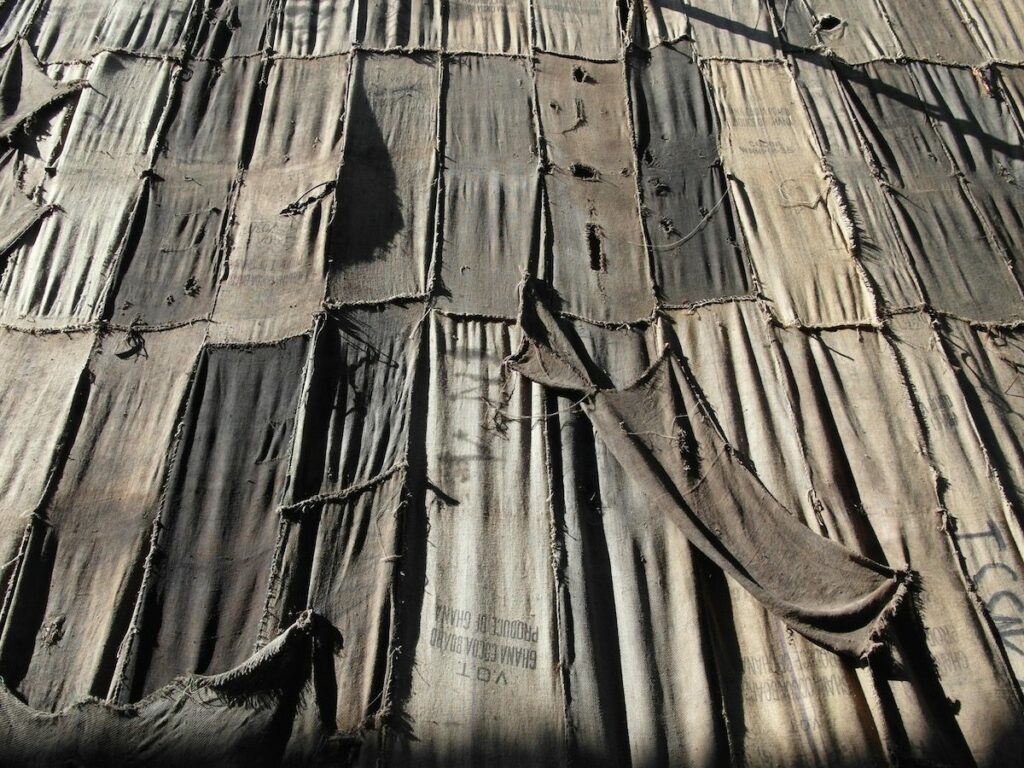 Ibrahim Mahama’s Out of Bounds, an installation made of coal sacks in the Arsenale

It is not singularly the grim watery passage of Africans elsewhere that is the basis of this perpetually stuck narrative, something Glenn Ligon’s text-based silkscreen paintings Come Out #12-#15’ (2015) make abundantly clear. These four black canvases, which layer a fragment of teenager Daniel Hamm’s testimony of police brutality in 1964 Harlem, play into contemporary debates over sovereignty, state control, white privilege and – if we are true to the civilizational underpinning of these attributes – the bankruptcy of the western enlightenment project. And yes, Enwezor’s project is ambitious in these civilizational terms.

In an interview with Artforum editor Michelle Kuo published shortly before ‘All the World’s Futures’ opened, Enwezor spoke of his interest in the post-western moment. “Post-westernism,” he explained, “has to do with the scepticism in the non-western world toward the essential wisdom that is the monopoly of the west.” Scepticism, not rejection: Enwezor’s grand intellectual project has flourished because of a mobile entrepreneurship that remains wedded to the patronage of western institutions. The need to think past the knowledge monopoly of the west, as Enwezor sees it, prompted him to create an exhibition that is both a conventional static display of objects and things, and on-going live event that is cautious not to be identified as a carnival (lest it be regarded as fun). 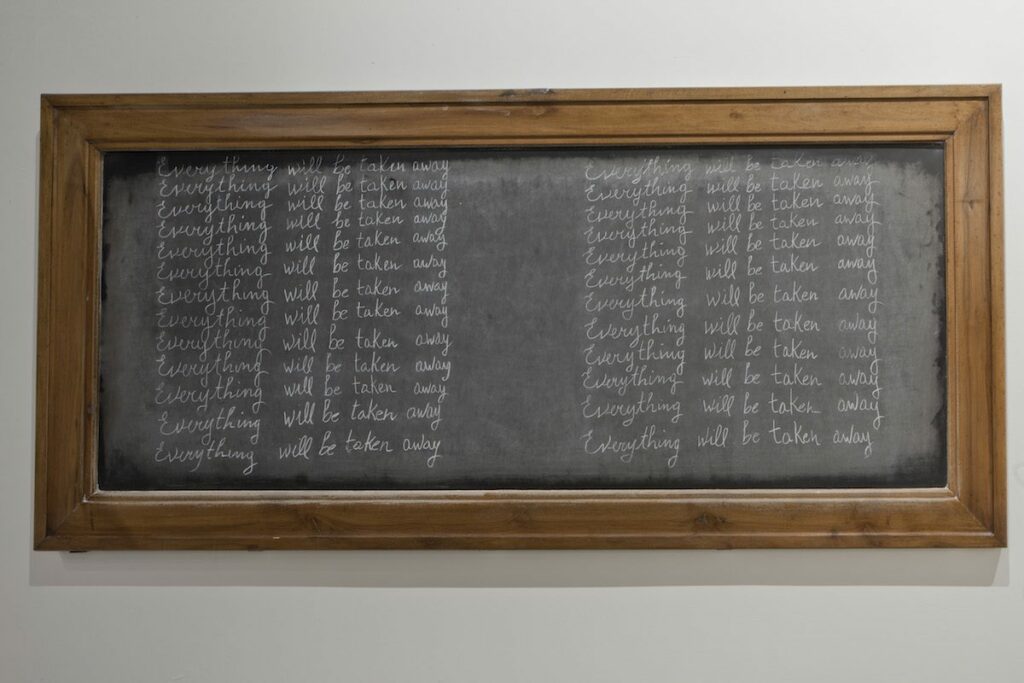 “Materialism is materialism,” sighed Adrian Piper during one of the early talks in the ARENA. Piper, an artist, philosopher and yoga disciple celebrated for her agile thinking and non-essentialist positions (she publicly retired from being black in 2012), was fittingly awarded the Golden Lion for the Best Artist. Sadly not everyone was as good-humoured or edifying in making sense of Marx’s “majestic” text, as Piper described it. One afternoon I watched an actor dressed up like Marx engage in a perfomative-debate in which fetish concepts like “commodity” and “use value” were recapitulated. It possessed all the charm of watching corporate theatre. The left’s crisis remains what it has long been: orality, the ability to broker conversation without becoming doctrinaire. Enwezor’s exhibition is true to type.

Of course, I’m crudely summarising the superstructure of an event – and Enwezor’s spectacle is much more than simply an exhibition – that gains it torque from the factuality of singular things. Like Egyptian painter and activist Inji Efflatoun’s devastatingly good oil works, which are all hot orange and desert yellow. Painted from the 1960s to her death in 1989, they pulled me out of the mire of black, the Venice Biennale’s signature colour this year, into a world of abundant life and richness. Brought up in an upper middle-class home, Efflatoun’s decision to reject surrealism in favour of visually describing Egyptian peasants and their struggles also determined her political compass. She was imprisoned for four years during the 1960s for her political beliefs.

I have singled out Efflatoun, and not the young Nigerian collective Invisible Borders, whose clustered presentation of photos and accompanying floor-projected documentaries wonderfully contextualised the mobile concerns of this enquiring group, for a simple reason. By virtue of her seniority, Efflatoun is an elder. Along with first-generation African-American conceptualists Piper and Terry Adkins, whose Darkwater Record (2003-08) silently replays W.E.B. Du Bois’s speech ‘Socialism and the American Negro’ as a mute augury, Efflatoun represents a central pillar of a viable alternative canon. Add German filmmaker and critic Harun Farocki and you have the four corners of a solid structure. 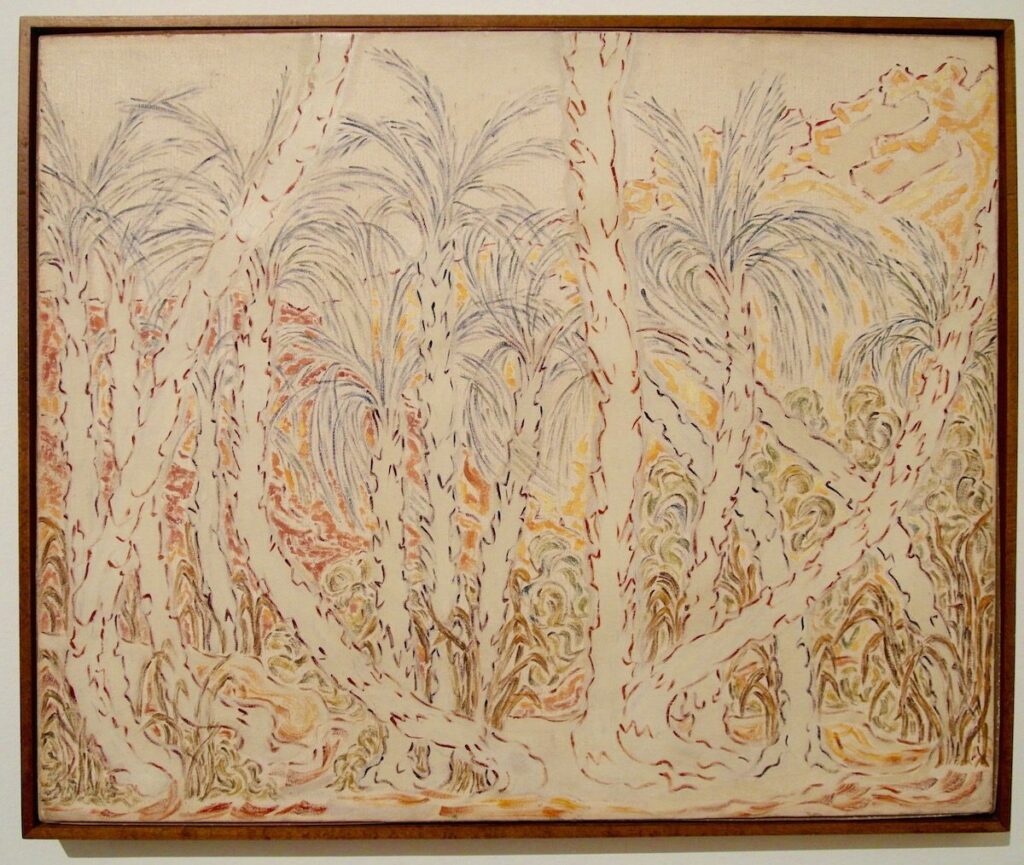 Canons are however notoriously fickle things. Writing in frieze, in argument against the 1995 canonisation of Beninese artist Cyprien Tokoudagba, the coffin maker Kane Kwei from Ghana and KwaNdebele muralist Esther Mahlangu by africa95, Enwezor offered other names as examples of artists who “at great professional cost and individual isolation have not only transcended but have equally transfigured the borders constituting the notion of Africanity”: Bili Bidjocka, Iké Udé, Yinka Shonibare, Olu Oguibe, Folake Shoga, Kendell Geers, António Ole, Oladele Bamgboye, Lubaina Himid and Ouattara Watts. None of these artists feature on Enwezor’s exhibition, which at times feels more like its core focus is the rehabilitation of African-American art, not contemporary Africa.

But curators are of necessity promiscuous beings. They don’t have many options but to be. Exhibition making is not like filmmaking, where, in the manner of Ingmar Bergman, different stories can credibly be told with the same actors. Still, I wonder, do none of the artists Enwezor admired circa 1996 have anything viable to say in 2015 about “the ruptures that surround and abound around every corner of the global landscape today,” as he offered in a statement framing his Venice show? Not one? As it presents itself, ‘All the World’s Futures’ nonetheless confidently asserts the place of Africa, the continent, and black Africans, be they from the continent or its many diasporas, as central protagonists in the story about now.

Shortly before visiting Venice I saw an exhibition of documents and work by the Art & Language collective at the Museu d’Art Contemporani de Barcelona. Some of the origins of Enwezor’s exhibition can be traced back to the queries raised by this group of conceptually minded artists working in Britain and the US during the argumentative years of Marxist academicism in the 1960s and 70s. One fragment of text from a display dramatizes a key question Enwezor’s show wrestles with. “So what would a socialist art be like (in practice) which was not simply a means to illustrate aspects of social history?” 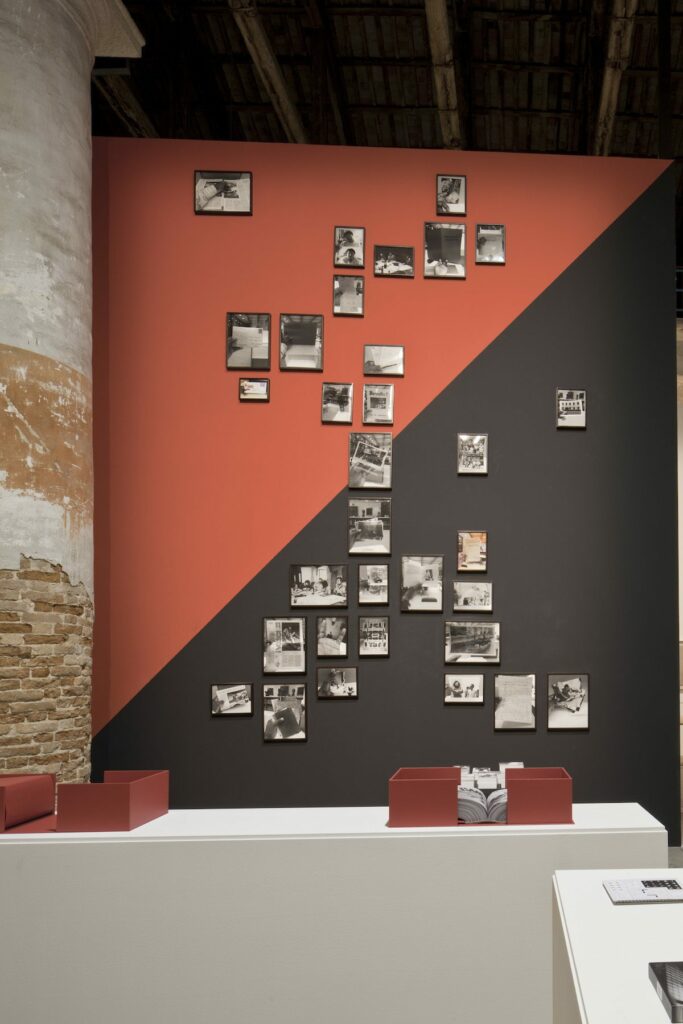 Enwezor’s exhibition offers a few possibilities. Gone Are the Days of Shelter and Martyr (2014), a film set in a now-demolished Romanesque revival brick church in Chicago by Theaster Gates. It is a beautiful document of his architecturally interested and regenerative social practice. There are numerous other examples to be found and argued over on this exhibition. Like the “stone-age filmmaking” (to borrow a phrase from William Kentridge) techniques used by Malawi-born Samson Kambalu in his Nyau Cinema series (2012-15), as well as the Situationist japery that underpins his Sanguinetti Breakout Area (2015), a display of letters and detourned images related to Italian writer and member of the Situationist International, Gianfranco Sanguinetti.

Stripped of the scaffolding of critical theory that encumbers Enwezor’s show, ‘All the World’s Futures’ achieves something pleasingly conventional. It does what any worldly show of art is supposed to: it functions as a showcase. One on which artists from 53 countries are allowed space to challenge the primacy of words, that ceaseless flow of words that characterises the ice age of global news, essay the “current disquiet that pervades our time,” as Enwezor put it, in their own scrappy, hybrid and purpose-defined idioms. Languages that often, but not always, exceed words.