We speak to the New York artist about Black womanhood, invisibility, and the pull of the tropics and the Caribbean.

Based in New York, Adrienne Elise Tarver is an interdisciplinary artist whose work addresses Black female identity, invisibility, and the history of the tropics. Tarver’s practice spans painting, installation, photography, video, and sculpture. In this interview she tells Kendra Walker about her beginnings and the development of her artistic practice.

Contemporary And: How were you introduced to art as practice?

Adrienne Elise Tarver: My undergraduate and graduate degrees were both in painting. The story with undergrad and the reason I went into it was because I was a confused teenager. I wasn’t sure what I wanted to do. Originally I thought I wanted to be an architect, but then realized it wasn’t for me in terms of the whole engineering side of it. My parents were the ones who encouraged me to apply to the art school at Boston university, where I ended up going. So I’ve had a lot of support from my family throughout my career, even though they don’t fully understand or didn’t understand what it is that I do. And then I went to grad school at the School of the Art Institute of Chicago. That was where my practice really opened up and I started following concepts more than materials.

C&: Do you think the city of Chicago and the peers you were surrounded by had anything to do with your practice expanding into other mediums?

AET: Yeah, I think there’s a couple of reasons why Chicago had an effect on it. I spent my middle-school and high-school years in the Chicago suburbs. So going to grad school in Chicago was my first time going back home. During that period I visited my parents and my childhood home regularly. My bedroom had a lot of materials in it that were interesting to me more than just paint and going to an art store. I was making a lot of work where I brought all of my childhood stuffed animals to my studio. I was looking at old family photographs. I was using fabric – my mom used to sew a lot and she had all these unused fabrics. I was really starting to value these objects and materials within the same hierarchy as oil paint or any other traditional art material. 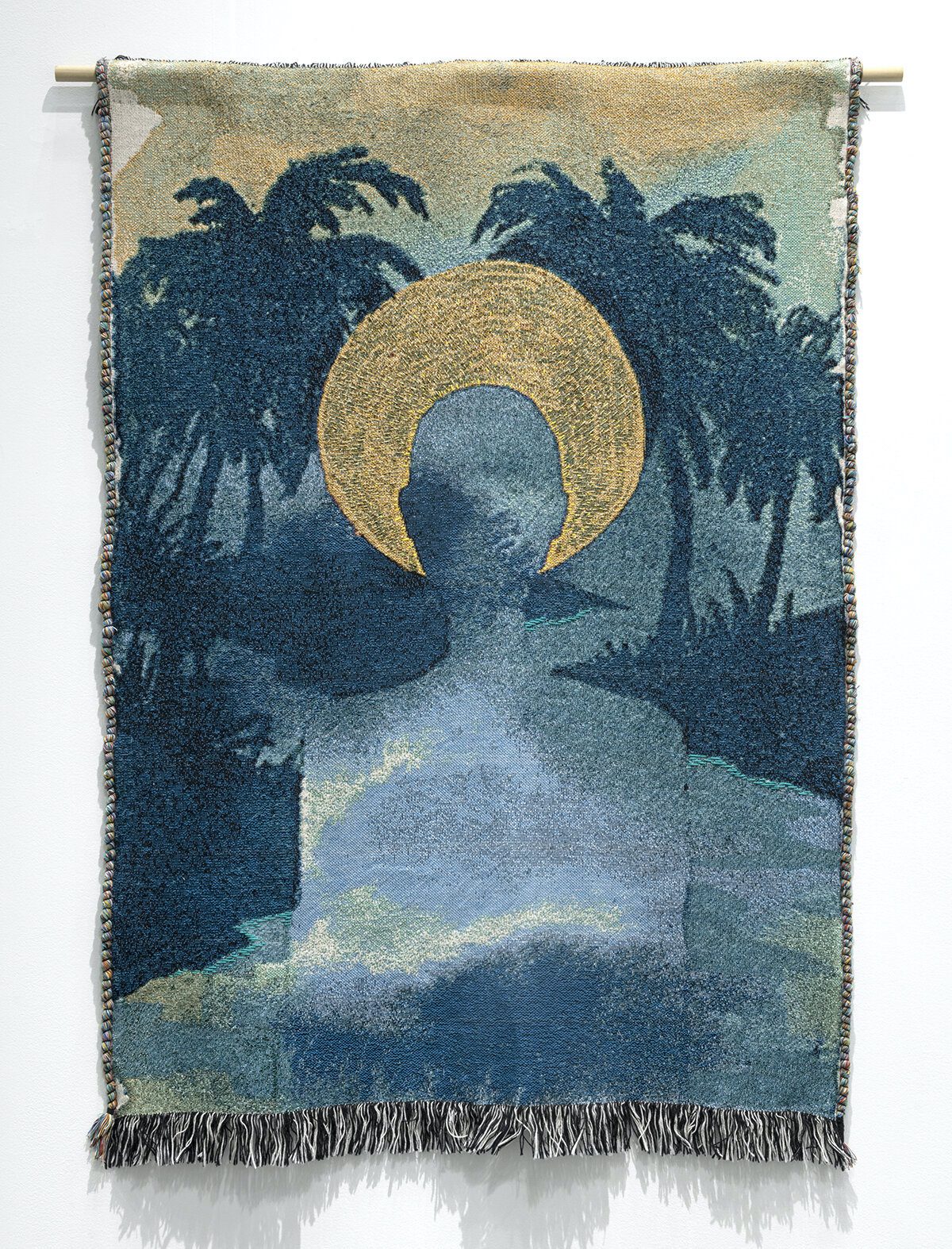 C&: Would you say that your thoughts on visibility or being invisible has anything to do with your personal life?

AET: I think a lot of the things I’ve used in my work stem from someplace super personal, but then it manifests itself in ways that are more broadly applied.

I use this sort of surrogate figure, which can sometimes be about me, but it can also be about somebody like my aunt or my mom or my friends. But it acts as a conduit for exploring lots of different feelings. This existence is specifically about Black and Brown women—there’s bits of me, but there’s bits of other people in it too.

C&: Why are the tropics important in your work?

AET: The tropics connects to or informs identity for Black Americans, or people in the Black Diaspora—regardless of the country you’ve landed in, there’s connection to an association with spaces that aren’t necessarily original.

I started to do research on where certain plants come from and realized a lot of then come from Africa, South America, and Central America, places that have been ravaged by colonialism and the effects of what has formed modern Western culture. It became this interesting analogy for me, that these plants themselves have gone through the same thing as the African Diaspora and Latin countries’ diasporas as well. These include crops that have been the graces of Western culture but the destruction of a lot of native cultures that have a different history.

My family doesn’t have a direct connection to the Caribbean, but there’s this mythology in the Black community around these spaces being a welcome home. That these are our spaces, and spaces that look like this sort of belong to people that look like me.

Kendra Walker is an Art Writer and Art Advisor that prioritizes and critically analyzes the work of emerging and established Black artist. As an arts writer she includes race theory and sociopolitical research in her work. She has contributed to arts publications such as Artsy, The Art Newspaper, Galerie Mag, Cultured Mag, and Sugarcane Mag. Kendra Walker currently lives and works in Atlanta, Georgia.