In Conversation with Temitayo Ogunbiyi

A Playground for Social Justice

You will play in the everyday, running at the Madre Museum in Naples, Italy, is a new work by Lagos-based artist Temitayo Ogunbiyi – and the first solo exhibition by a Black woman at the institution.

With her playground installation, Temitayo Ogunbiyi revisits the common understanding of play by connecting it to historical and contemporary political experiences of space, traditions, and nature. C& spoke with Ogunbiyi about the concept and design of the playground, her interest in the movement of people, and why she connects the vocabulary of play to the vocabulary of violence.

Contemporary And (C&): Your new work is a playground installation in the enclosed main courtyard of the Madre Museum. How did you decide what the elements would look like and which materials you would use?

Temitayo Ogunbiyi: The idea with the shapes of the bars was to represent a connection between Lagos and Naples. They incorporate Google Map lines tracing the route between the two cities by road, which was the only way to travel from Lagos to Naples during the time in which I conceived of the work. 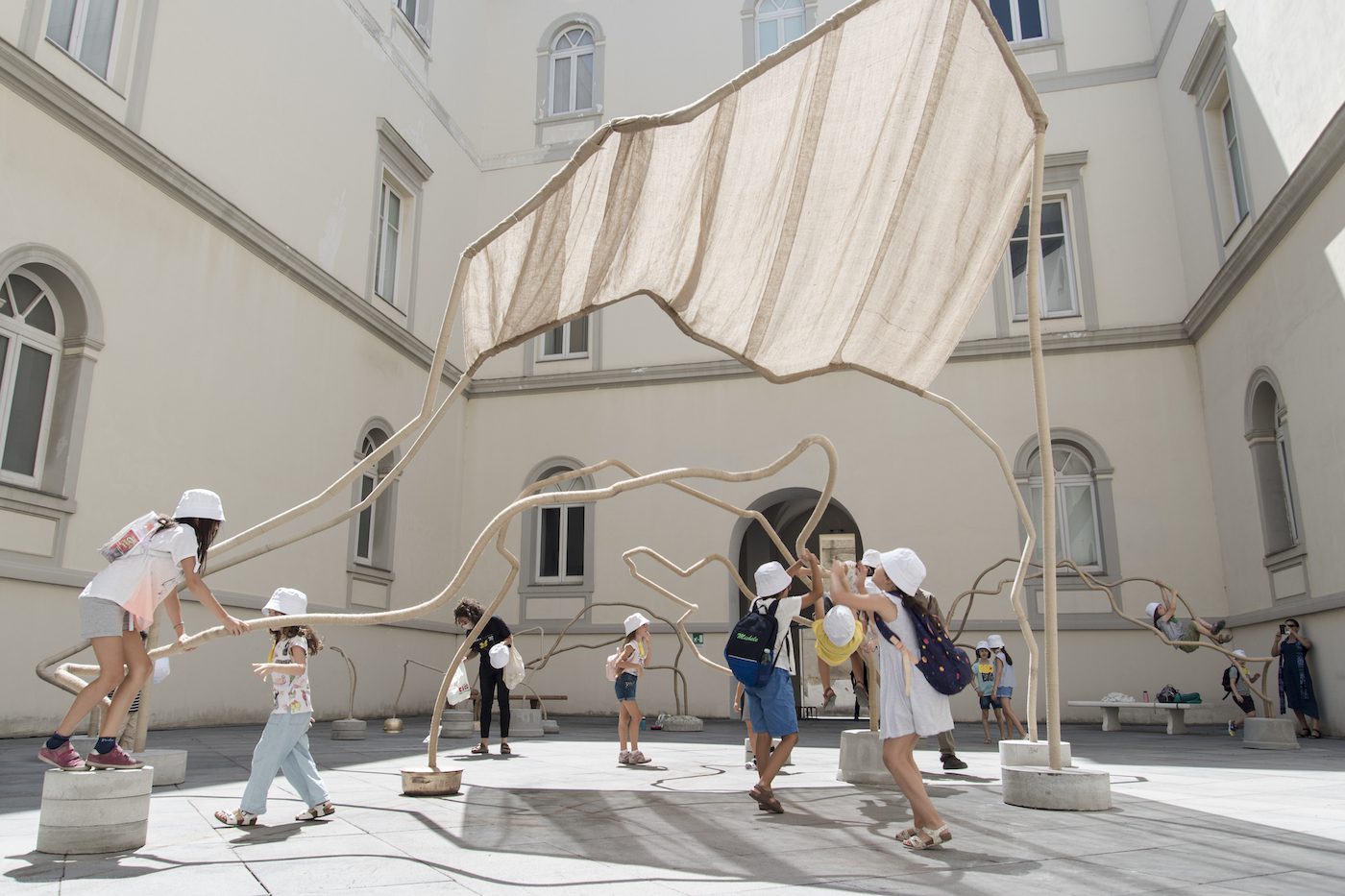 The materials speak of cooking, food processing, and food consumption. The jute fiber used for the shading structure and to wrap the bars comes from the same plant as the leafy vegetable ewedu. The round concrete blocks are a nod to both the stone grinders that, before blenders, were once very popular here in Nigeria, and to the homemade gym in which buckets are sometimes used to cast concrete in dumbbell-like forms for muscle training, mainly by men. Together, the materials are also about how spaces for exercise and food often become gendered. I sought to question and reimagine such roles and expectations.

The brass and bronze shapes refer to histories of portraiture. When I was taking part in the Smithsonian Artist in Research Fellowship program, I learned of the tradition in the Moba tribe whereby a person’s mortar was placed on their grave after they died. There is an intimate connection between who we are and what we rely on to live, hence my interest in connecting utilitarian objects to materials often used to depict people. 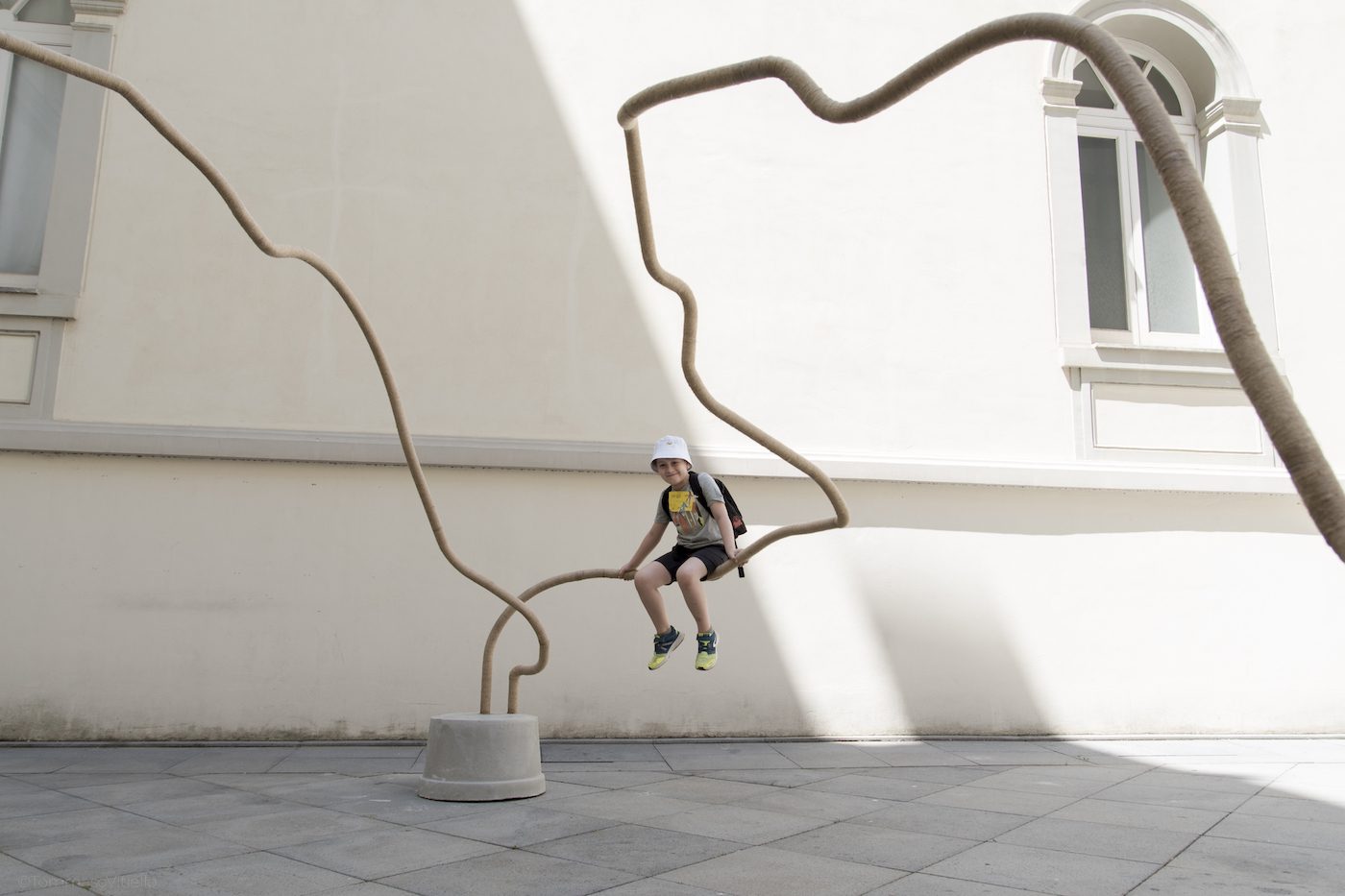 C&: The title You will play in the everyday, running sounds like a promise. Why did you choose this phrasing?

TO: There were days when I had a headache over the title. I needed a title that described how I was feeling at the time, spoke to the piece specifically, and pushed beyond or cast open a literal description, while also directly addressing the ethos behind the work and encouraging people to move, progress, and embrace the freedom in their midst.

This work is part of the series You Will, and its titles are based on contemporary prayers in Nigeria. They incorporate Pidgin English spoken in Lagos and Jamaican patois, and depart from histories of the meanings assigned to hairstyles.

“Play” in English has so many meanings – physical activity, music, theater. The word can go in many directions, and for this reason it remains central to the titles I attach to my playground works. “Everyday” speaks to the fact that play, in the midst of the pandemic, had very much become about reinventing everyday objects and circumstances. It is also about finding play and being playful in that which is most familiar and accessible. “Running” began as a reference to the murder of Ahmaud Arbery in the US, and my belief that everyone should have the right to run – as physical exercise and in the marathon of life. I am still so rattled by his death, the deaths of so many Black people that have become increasingly visible over the course of this year. “Running” also references the determined meanderings of plants, and their resilience and adaptability – I really do find encouragement in how plants persevere and thrive, at times in very unexpected circumstances.

C&: As the title suggests, the playground installation hints at the importance of and the right to physical activity. How do you contextualize the subject of social justice in this work?

TO: Oftentimes social justice is imagined as dismantling hierarchies, but what if it starts with freedom experienced in childhood? Can this heighten awareness of compromised freedoms, and compel future generations to make space for those without that freedom? Many children and families have played in my installation, and I want to remember those whose options for play are limited. This could be due to lack of privilege and exposure, or limits imposed by endemic racism. In this work I connect the vocabulary of play to the vocabulary of violence, with the belief that the two overlap and that tolerance, on communal and individual levels, can begin with play. 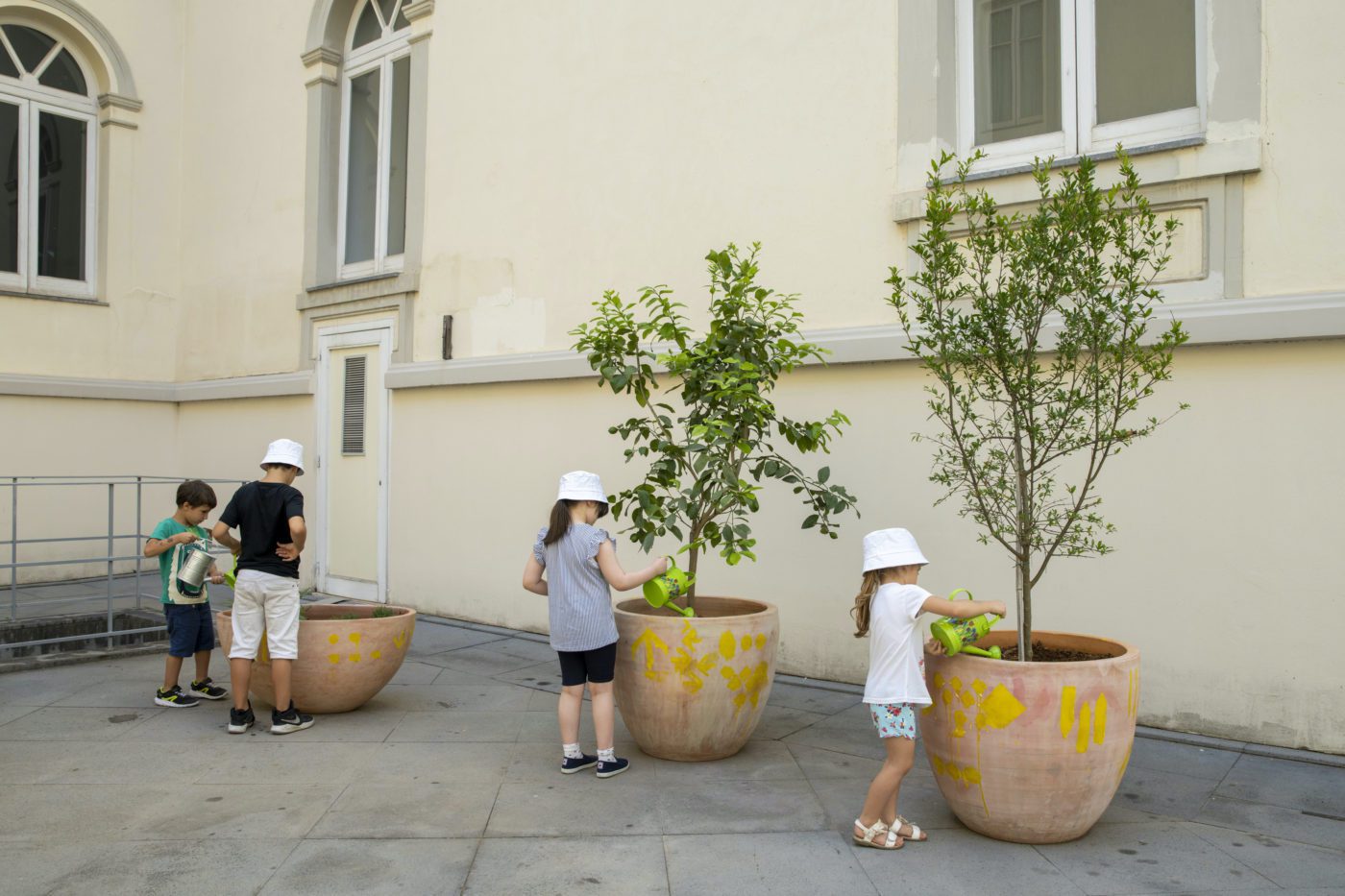 C&: As part of the exhibition you also started the workshop series “Planting and plant love.” What is the idea behind it?

TO: I selected plants from Lagos and Naples for a potted garden to illustrate again a connection between the two cities. For the workshop, I invited children to water those plants, and plant seeds and rooted cuttings. They also painted the terracotta plant pots, choosing from the twenty-eight stencils I designed from images of the two cities, interpreting street signs, street markings, and social distancing indicators – a reflection of how people navigate public space contemporarily. This was also a response to my interest in adire, an indigo fabric-dyeing technique in West Africa. The designs indicate the time and the location where they were made, often incorporating events and proverbs. It is similar to how the appearance of street signs distinguishes countries, or different parts of a city.

With all of the workshop activities, my hope was that participants might learn how plants can connect to and reflect the movement of people, in a manner comparable to road signage. Bringing all these references together is also meant to underscore how plants can become signs of the past for future generations.

Temitayo Ogunbiyi’s art explores the relationship between the environment, line, and representation. Moving between drawing, painting, sculpture and installation, her work responds to and forges dialogues between global current events, anthropological histories, and botanical cultures. Systems that capture, mediate, and direct the movement of people and matter is a recurring subject of investigation in her practice. Ogunbiyi is the recipient of numerous fellowships and awards, including a Smithsonian Artist in Research Fellowship and a Ford Foundation Fellowship. Her artwork has been included in exhibitions at the Pulitzer Foundation for the Arts, the Centre for Contemporary Art Lagos, the Museum of Contemporary African Diasporan Arts (Brooklyn, NYC), Perm Art Museum, the Dom Umenia (Bratislava, Slovakia), Berlin Art Projects, the Fries Museum in Berlin, and most recently, the 2nd Lagos Biennial of Contemporary Art 2019. Her playground project also featured in a curatorial publication commissioned by the 10th Berlin Biennale. Ogunbiyi earned a BA from Princeton University (2006) and a MA from Columbia University (2011). The Nigerian-Jamaican-US artist lives and works in Lagos.

In the run-up to the Biennale, C& mentee Gloria Mpanga takes a critical look…