Our author Hansi Momodu-Gordon visited the first PhotoLondon, and the exhibition of contemporary photography at Tiwani Contemporary.

As London marked a burgeoning interest in photography with a new international photography fair Hansi Momodu-Gordon visited the first PhotoLondon, and a concurrent exhibition of contemporary photography from Africa and the Diaspora at Tiwani Contemporary.

The inaugural PhotoLondon held at Somerset House from 21-24 May 2015 managed to intrigue, excite and exasperate in equal measure. Whilst the photography focus of A View From Here at Tiwani Contemporary introduced London audiences to a diverse selection of artists currently working in Africa and the Diaspora.

As I made my way through the maze of booths and on to the curated exhibitions at PhotoLondon, stopping often to admire captivating prints by Daido Moriyama or Diane Arbus and the much-celebrated Sebastião Salgado it soon became clear that the ‘international’ selection was somewhat remiss in its presentation of practitioners from Africa. In a fair with over seventy exhibitors just a handful presented works by African photographers, and only one showed the work of a woman from the Africa or the Diaspora.

Photographic technology reached the continent of Africa within a year of its invention in 1839. The history of photography on the continent and across the Diaspora is thus as long and complex as it is rich. It has been kept alive by generations of innovative photographers and continues in the work of contemporary practitioners among the: Akinbode Akinbiyi, Alioune Bâ, Dorris Haron Kasco, Samuel Fosso, Sammy Baloji, Sabelo Mlangeni, Zanele Muholi, Invisible Borders, Mame-Diarra Niang, Michael Tsegaye, François-Xavier Gbré, Ananias Léki Dago, Mimi Cherono Ng’ok, Adeola Olagunju. None of whom were represented at the fair.

Predictably, the iconic portrait photographs by Malian’s Seydou Keïta and Malick Sidibé were present, alongside the newly canonised Nigerian master J.D. ‘Okahi Ojeikere with compelling, if over-exposed work from his Hairstyles series on view at Gallery Fifty One and Tiwani Contemporary. Michael Hoppen Gallery presented an extensive portfolio of vintage prints by South African David Goldblatt In Boksburg, shot between 1979-1980 (published in book form in 1982), detailing the arrogance of white middle-class life under apartheid and the absurdity of that regime. South African Pieter Hugo was represented at Yossi Millo Gallery by a single print from his seminal The Hyena and Other Men series shot in Lagos, Nigeria (2007). Mikhael Subotzky and Patrick Waterhouse, recent recipients of the Deutsche Börse Photography Prize 2015, were included with a single print amongst a dynamic display by the Photographers’ Gallery.

David Goldblatt, Installation view of In Boksburg, 1982. Courtesy of the author

And then there was the re-occurring visual presence of Africa created by others. Examples by Alinka Echeverria from Brazil and Alexis Cordesse from France, presented work created in South Sudan and Rwanda respectively, and seemed to offer up nuances and complexities rather than direct stereotypes. However Scottish photographer David Yarrow’s ‘Mankind’ from the Indigenous Communities series (2015) was troublingly exoticised and felt regressive. His smoky black and white image depicted herdsmen and their cattle merging to become indistinguishable from one another and their surroundings.

Visibility without agency is a precarious and potentially violent position, but even more so is a total lack of presence, demonstrated by a curated exhibition presented by The Victoria and Albert Museum at PhotoLondon. Beneath The Surface: Photographs from the V&A Collection (on view until 24 August) took the city of London as inspiration to highlight rarely seen prints from a holding which it claims is ‘one of the largest and most important in the world… [It] is international in scope and covers the entire history of photography from 1839 to the present’. Yet, despite this breadth of source material, and with a muse as alive with multiculturalism as the city of London – home to a thriving Diaspora community – all  the curators managed to find beneath the surface was more of the same: North American and European men.

Continuing my search for important photographic works by artists from Africa and the Diaspora I headed to the Tiwani Contemporary booth. With its remit centred on artists from the region the gallery made the strongest contribution to a disappointingly mute discourse on African photography at PhotoLondon. Alongside Ojeikere’s prints hung works by Alida Rodrigues, Abraham Oghobase, Andrew Esiebo and a stand out piece by Mory Bamba. A strong selection, yet on the whole the display seemed to fall victim to the art fair context with unfortunate juxtapositions and timid print sizes at times detrimental to the work.

At its Fitzrovia location, Tiwani’s curated exhibition A View From Here was much more coherent. As you enter the space your sight line is drawn to the black, white and yellow tinted prints of Délio Jasse. Unframed and modestly tacked to the back wall with pins, a group of four images depict scenes of everyday life- hair plaiting, journeys and exchanges. Jasse’s images take on a painterly quality with brush strokes visible across the surface, remnants of his technique employing photographic emulsion. 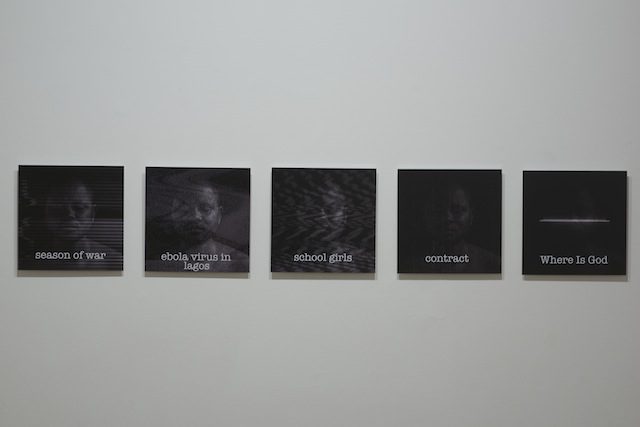 Abraham Oghobase, Signs of the Times, 2015, Installation shots from The View From Here. © Sylvain Deleu

Abraham Oghobase presented a row of five prints in which the artist’s face and shoulders are obscured by graphic interference reminiscent of a tuned-out TV set. Words across the bottom indicate recent Nollywood movie titles: ‘season of war’, ‘ebola virus in Lagos’, ‘school girls’. Part of a larger series, usually shown in a grid, here they looked slight and, without the visual impact of multiples, the content appeared as literal as the film titles the work draws upon. A cluster of five of Mimi Cherono Ng’ok’s filmic cityscapes shot in Dakar, play with perspective and framing to interrogate our relationship to the familiar and unknown. Her images anticipate action and create space for narrative to unfold. 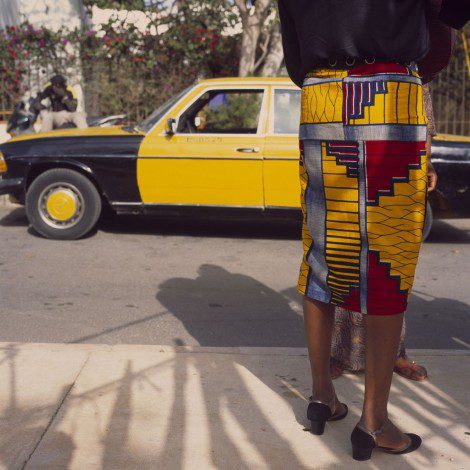 Mimi Cherono Ng’ok, Untitled, from the series, No one but you (Dakar), 2014, Courtesy: Tiwani Contemporary

In a series of three large, framed prints Dawit L. Petros inserts Western Modernism’s Black Square into the strikingly similar landscapes of Nazareth (Ethiopia), Santa Barbara (California) and Marfa (Texas). The dark square void of a large box held by the human body or resting on a bush disrupts the horizon line with shapes that represent different letters of the Eritrean alphabet. Petros’ layering of meaning and visual references rewards moments of contemplation.

Taking on a range of themes from personal and collective identities, globalisation and the relationship of the photographic image to performance, moving image and text, the exhibition foregrounds diverse and critical voices in the field of photography. With some managing to push the dialogue into new directions.

The challenge now is to ensure those voices are heard ‘in the history of photography from 1839 to the present’.

Hansi Momodu-Gordon is an independent curator, writer and producer. She worked at the Tate Modern, Turner Contemporary and CCA Lagos.